Mumbai City sits at the Top of the Indian Super League Standings, tied on points with ATK Mohun but separated with goal differential.

In this thread, we will be covering 5 fixtures of Matchday 5 (of 11) from 8th to 12th December 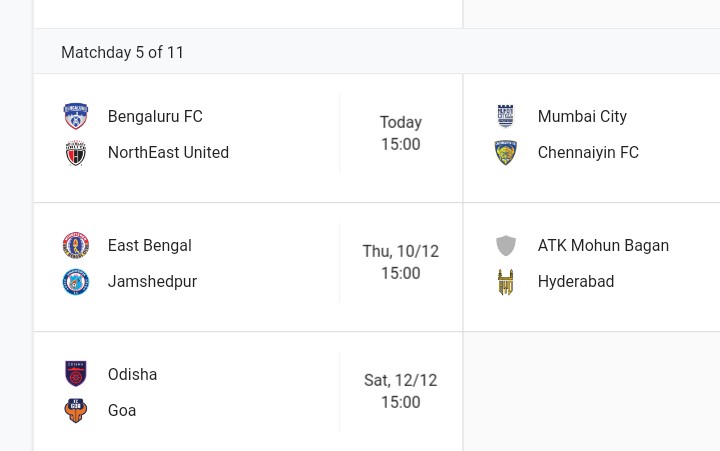 The fourth round of the Indian Super League will see former champions Bengaluru FC taking on NorthEast United FC at the Fatorda Stadium in Margao, Goa.

Bengalaru FC picked up their first win of ISL 2020-21 when they beat Chennaiyin FC, courtesy of a second-half penalty from skipper Sunil Chhetri. Head coach Carles Cuadrat will be happy that the Blues were able to hold on to their lead till the end.

Bengaluru FC retained most of their core players from last season’s squad which reached the ISL playoffs. However, they have looked far from the strong outfit that is known to dominate play on the pitch. They seem to be lacking the attacking intensity this time around. It is evident from the fact that their strikers have scored just once in their three ISL matches so far.

Northeast United on the other hand, have been a revelation in the ISL 2020-21 season, staying unbeaten so far in the competition. In their four matches, they have won two and drawn two, racking up a tally of eight points in the standings.

With a good bunch of talented youngsters and experienced overseas players, Nus has managed to build a balanced side. With lethal strikers like Kwesi Appiah and Idrissa Sylla in their ranks, the Highlanders will fancy their chances against Bengaluru FC. 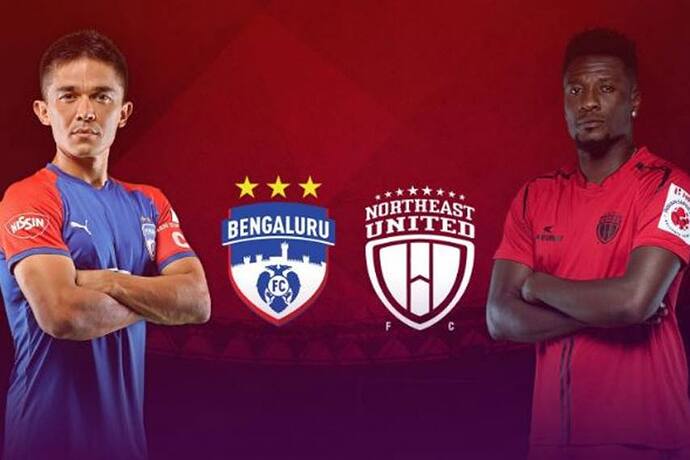 The recent battle between the two sides has been dominated by Bengaluru as well. 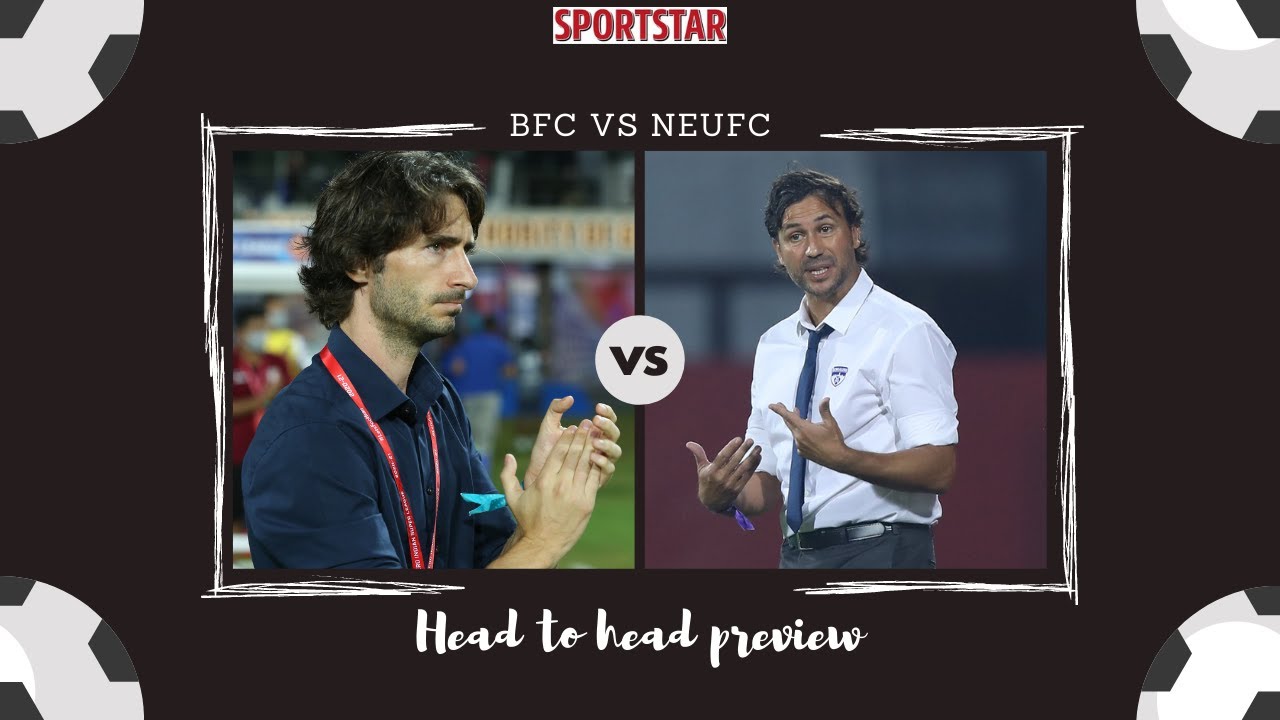 changes for tonight’s contest in Fatorda. 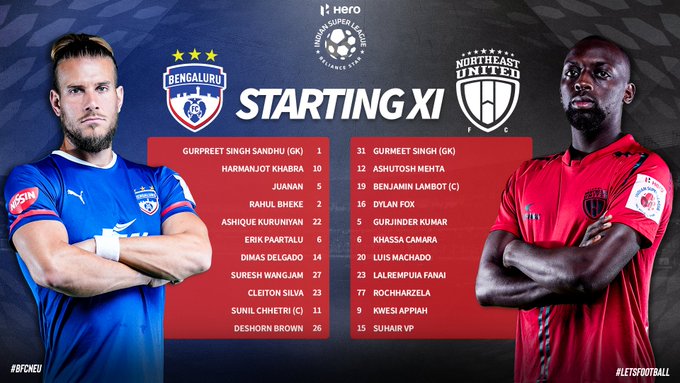 Bengaluru FC conceded its fastest goal in the ISL when NorthEast United struck in the fourth minute. Goalkeeper Gurpreet Singh Sandhu was left flatfooted by the change in trajectory of the ball and could only watch the ball sail into the net. 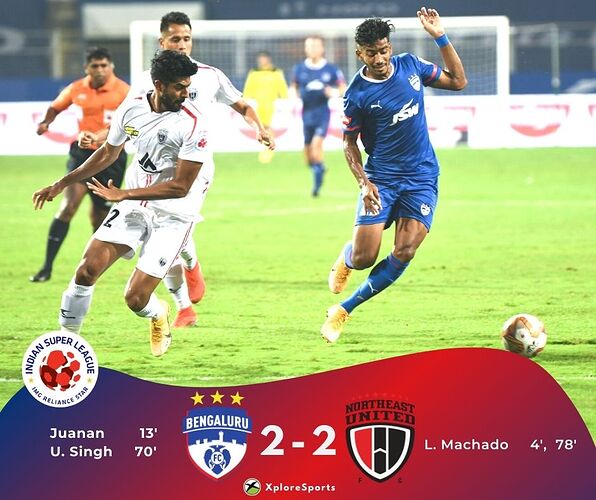 Luis Machado brace secures a draw for the Highlanders 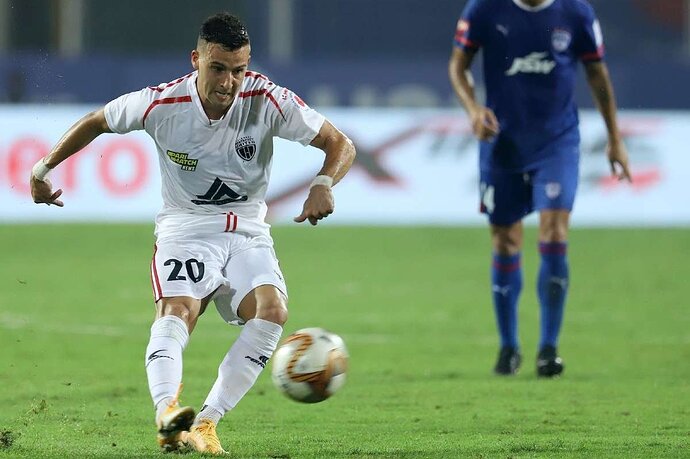 Luis Machado brace secures a draw for the Highlanders

Hero of the Match: Luis Machado

These were Machado’s first goals in the Hero ISL and the Portuguese shone like a bright star for the Highlanders. Out of four of his shots, three were on target. As far as his passing play was concerned, he completed 13 out of his total 22 passes. He had five free-kicks in the game as well as five tackles.

It was a thoroughly entertaining contest between Bengaluru FC and NorthEast United FC as both sides maintained their unbeaten start to the season! 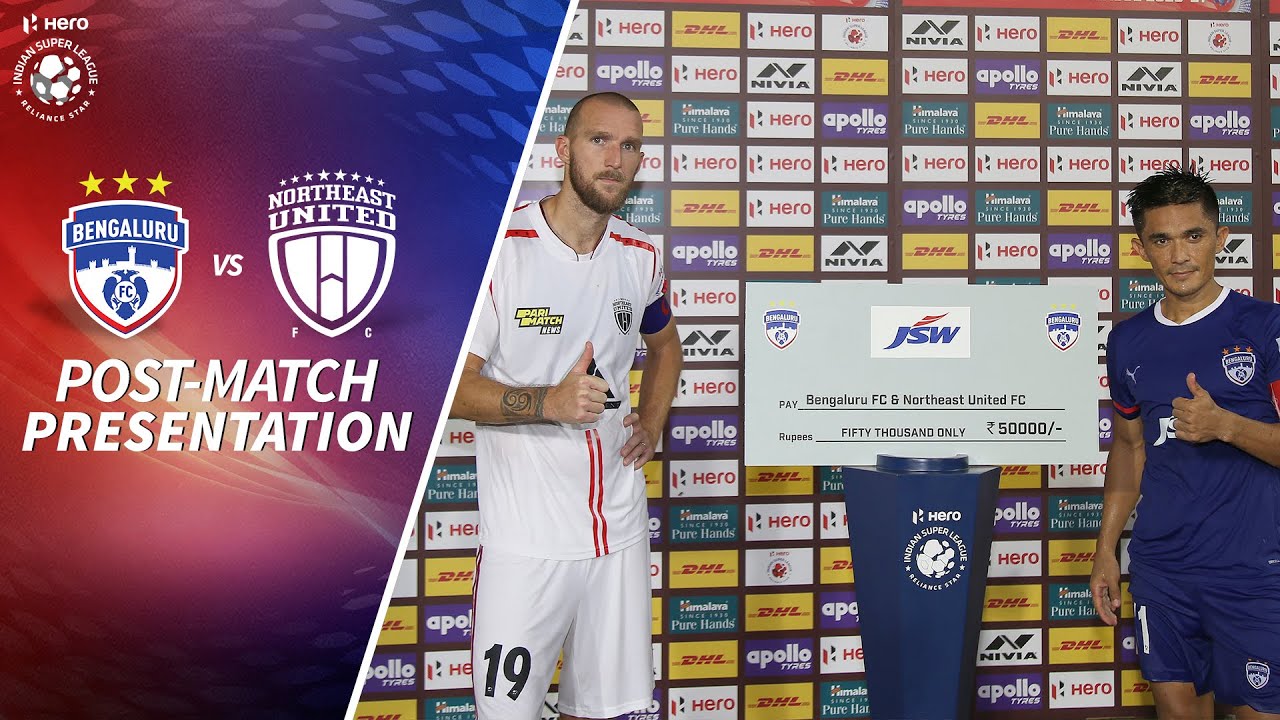 Kerala Blasters announced on Tuesday that Sergio Cidoncha has left for Spain to recover from an injury and will miss the remainder of the ongoing Indian Super League season. 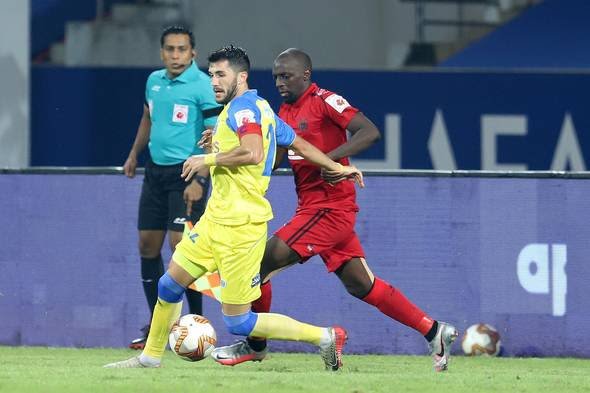 Mumbai City face Chennaiyin FC in the 22nd match of the 2020-21 Indian Super League (ISL) at the GMC Stadium in Bambolim on Wednesday night.

Mumbai City have won three games on the bounce and are the current league leaders, as they lead ATK Mohun Bagan on goal difference.

In their last game, Mumbai City put on a terrific display to beat Odisha FC 2-0, with goals from Bartholomew Ogbeche and Rowllin Borges.

Sergio Lobera’s side look to be warming up to their manager’s ideas, with midfield general Ahmed Jahouh looking in sublime form.

Chennaiyin FC lost their last game 1-0 to Bengaluru FC, after a Sunil Chhetri penalty decided that contest. Chennaiyin weren’t really outplayed in that game and did have their chances to score, so they would not be overly worried at this point.

A slight concern for Csaba Laszlo would be that his side have not scored a goal in five consecutive halves of football since taking a 2-0 lead in the first half of their first game against Jamshedpur FC.

Chennaiyin FC have won six of the 12 games that they have faced Mumbai City FC in before this. Mumbai City have beaten Chennaiyin only four times. 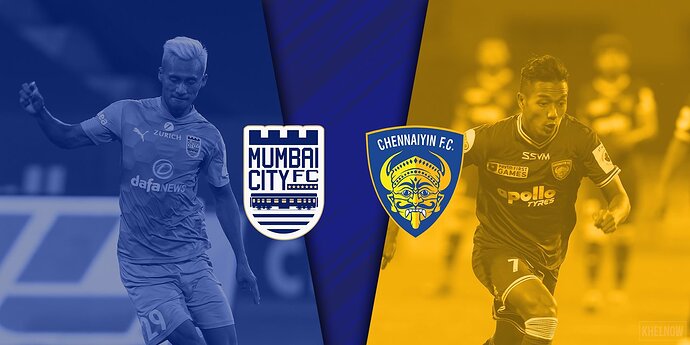 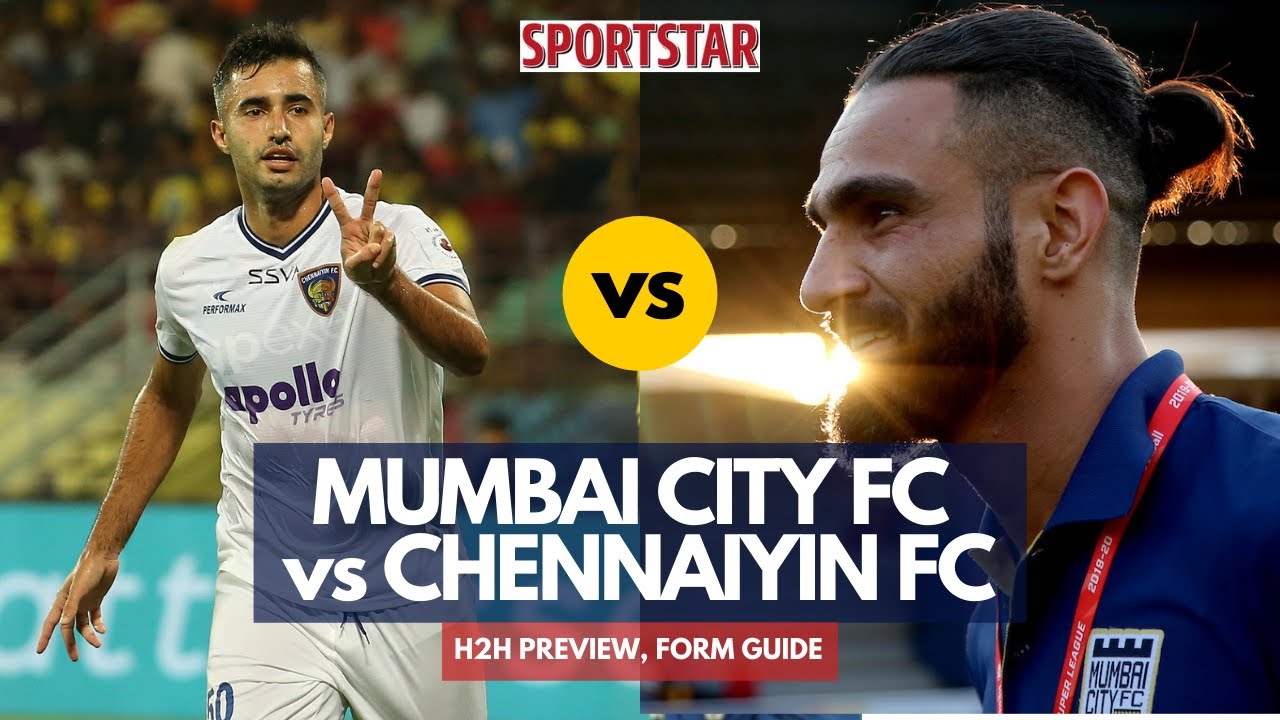 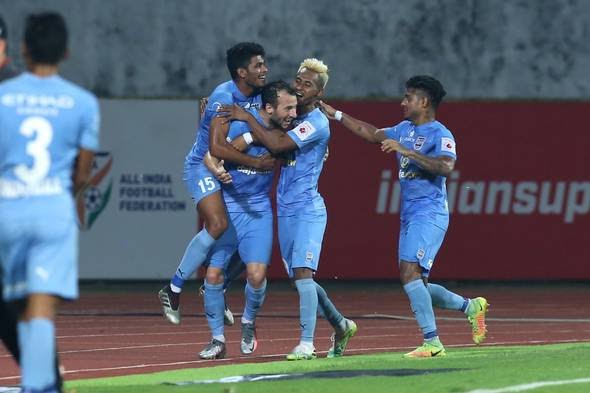 The result sees Mumbai City consolidate its position on the top of the ISL points table with 12 points from 5 games, while Chennaiyin FC remains on the 8th spot. 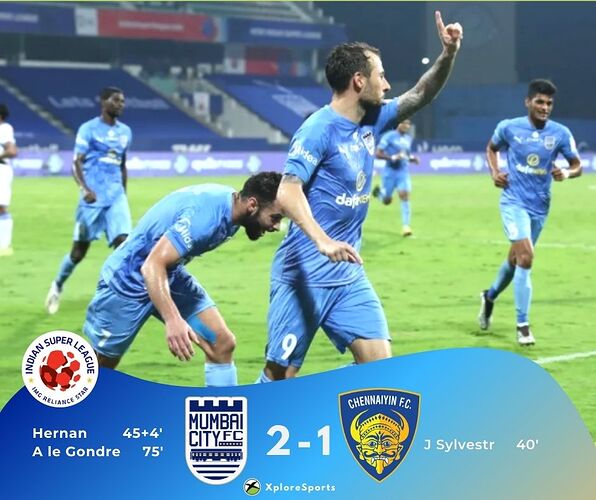 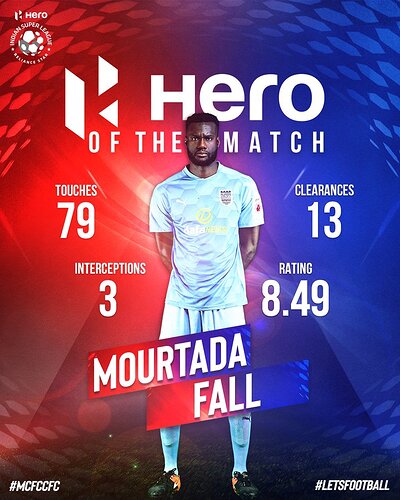 SC East Bengal will be looking for the first points when it hosts Jamshedpur FC in Eastern derby tonight at the Tilak Maidan Stadium in Vasco.

Jamshedpur FC come into tonight’s match with high confidence after their first win of the tournament in the previous match against ATK Mohun Bagan 2-1. Valskis has scored 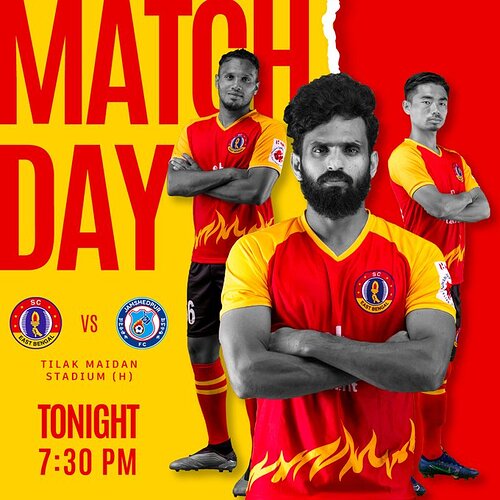 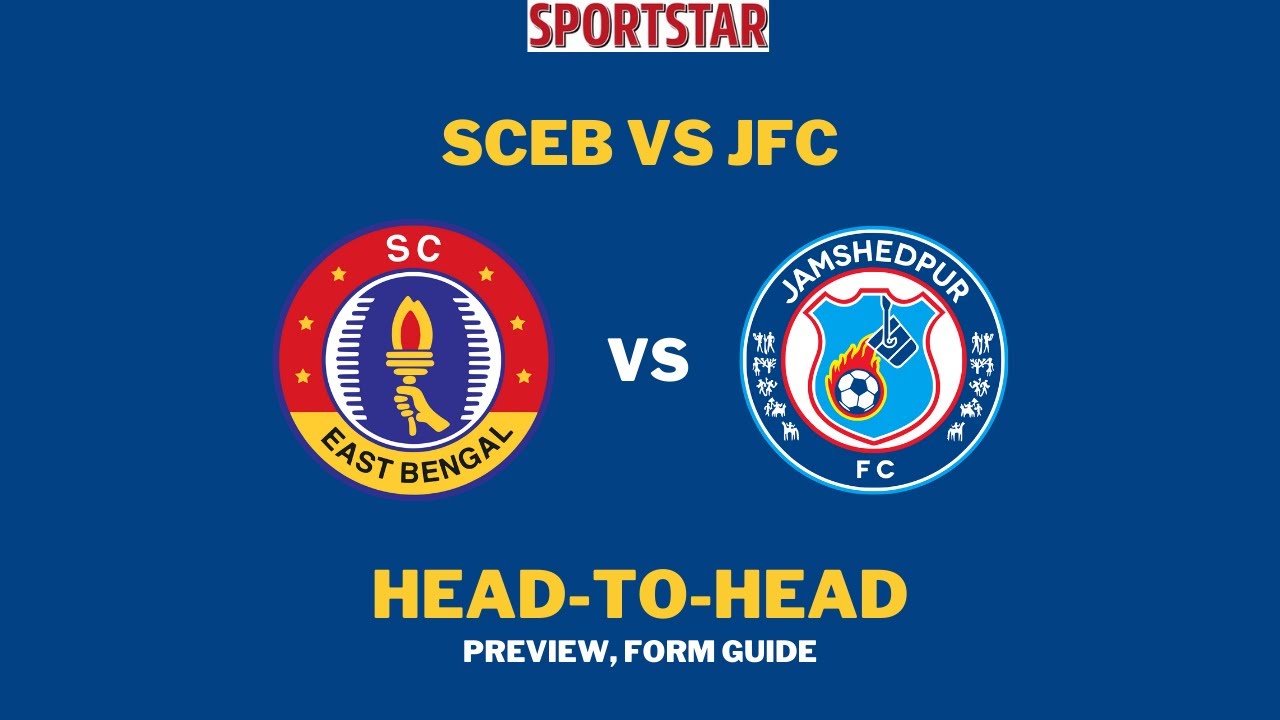 SC East Bengal have had quite a torrid start to their debut season in the ISL as they currently sit at the bottom of the league table. Robbie Fowler’s side have lost all three of their games so far and are still in search of their first point(s) this season. More worryingly, East Bengal have failed to score a single goal this campaign while conceding seven in the process.

The ISL debutants suffered a 3-0 defeat against ATK Mohun Bagan on Matchday 1, a 2-0 defeat against Mumbai City FC at the start of this month and another 2-0 defeat against NorthEast United on Saturday. Liverpool legend Robbie Fowler will be aware that he needs to turn the fortunes of East Bengal if they are to stand any chance of making it to the playoffs.

On the other hand, Jamshedpur FC have managed to rack up five points from their four games so far. Owen Coyle’s side moved to seventh place on the ISL table following their first win of the season, which came against ATK Mohun Bagan on Monday. After a 2-1 defeat against Chennayin FC on matchday 1, Jamshedpur FC were then held to draws against Odisha and Hyderabad. 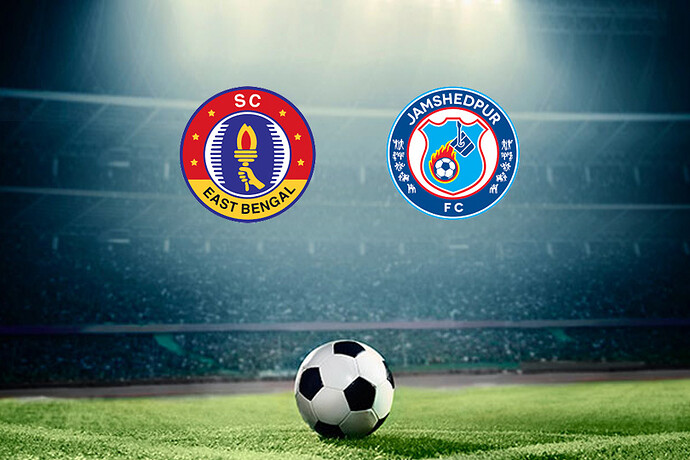 East Bengal hold Jamshedpur to a goalless draw to register their first point in the ISL this season. 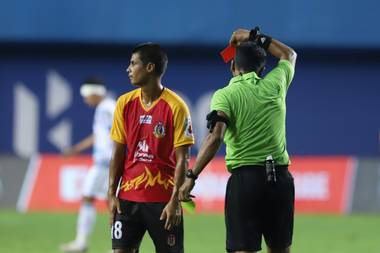 None of the teams could break the deadlock. With the draw, SC East Bengal earn their first point of the season. SC East Bengal played with 10 men for most part of the match.

Jamshedpur FC went down to 10 men in the 92nd minute after Dinliana was sent off. Jamshedpur had a number of chances, hit the bar twice, got themselves in good positions but lacked the killer edge. 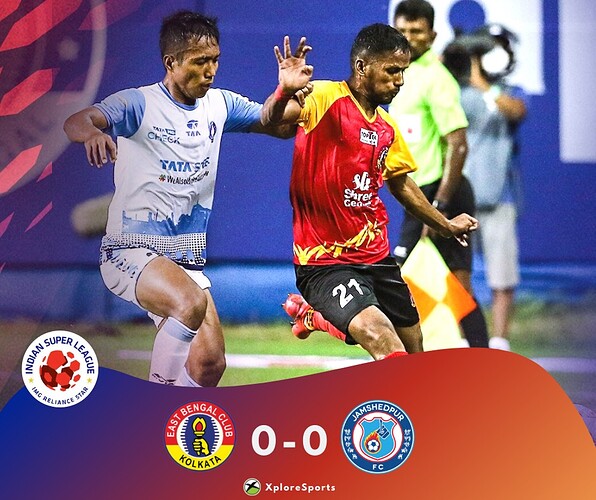 Md Irshad made some crucial clearances at the back tonight, thwarting every opposition attack to become Player of the Match. 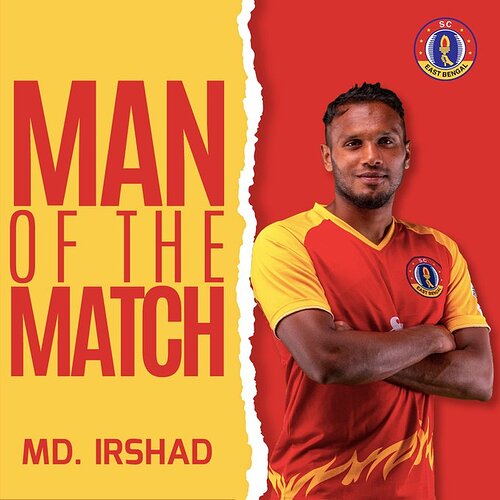