Khassa Camara, the man who dominated the midfield for NorthEast is the Hero of the Match. 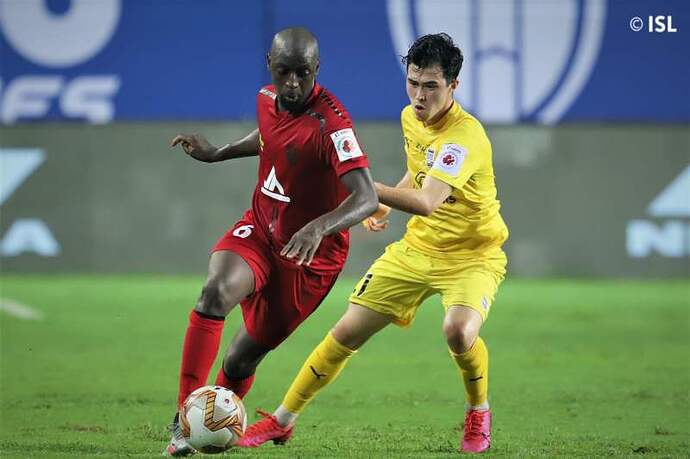 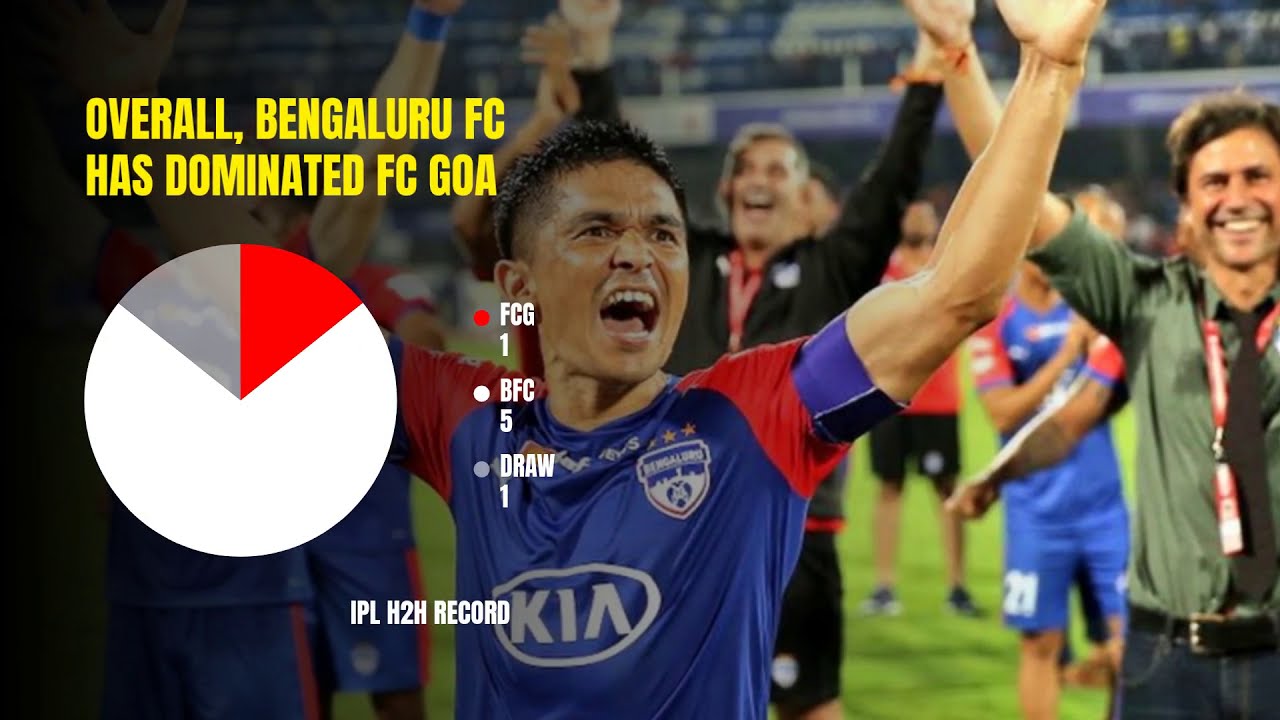 FC Goa will host Bengaluru FC at the Jawaharlal Nehru Stadium, Fatorda in Goa at 7.30pm IST tonight. Both the teams couldn’t make it to the ISL Final last season, after losing their semi-final clashes. While FC Goa lost to Chennaiyin FC 5-6 on aggregate, Bengaluru FC faced defeat against ATK.

FC Goa, however, had a glorious season last year, finishing as the league stage toppers and also the top goal-scorers.

Bengaluru FC earned praises for having the best defence last season but their biggest problem was lack of goals. This season Bengaluru would like to think that they have dealt with that problem following the arrival of two new forwards, Cleiton Silva and Kristian Opseth.

Looking back at their playing history, FC Goa have been able to defeat Bengaluru FC only once, while Bengaluru FC have beaten FC Goa 5 times, with one match concluding in a draw.

Tonight, Chhetri and team would look to overcome last year’s blues and hit the right notes. 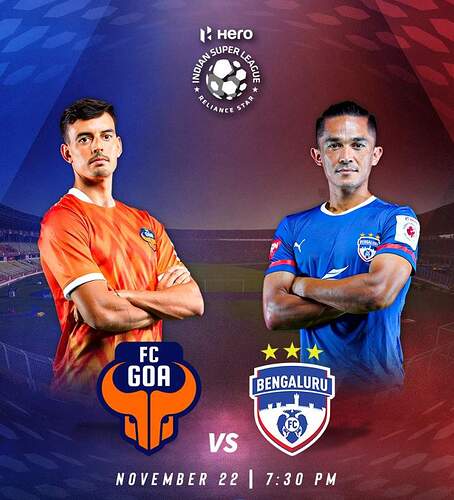 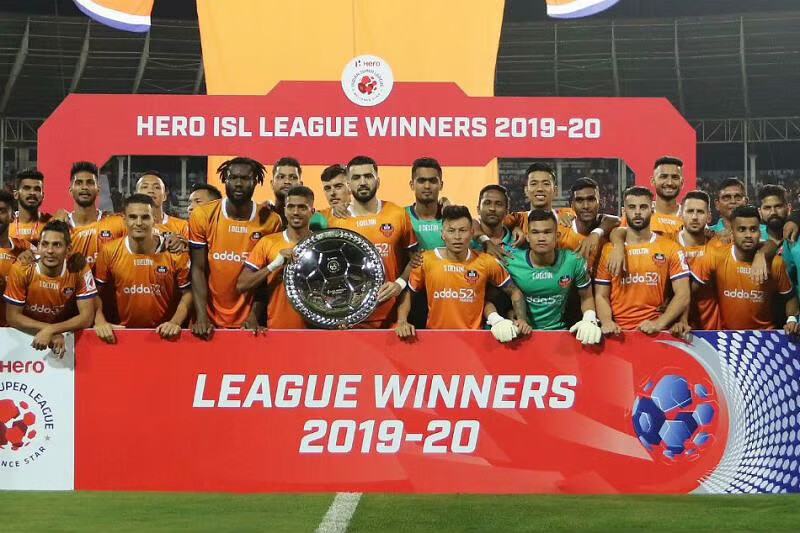 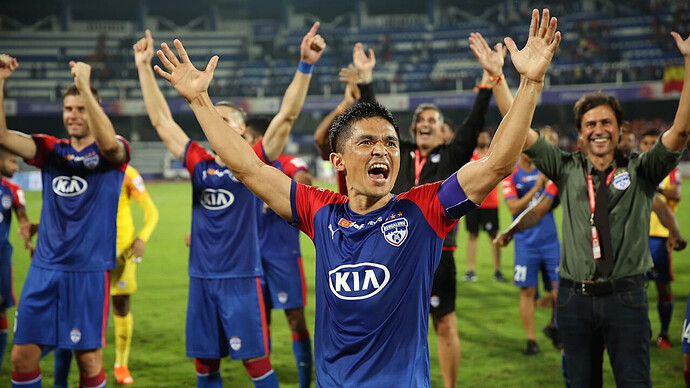 BFC has also dominated FCG in the recent, winning four of the last five encounters.

Superb comeback by Goa!
Igor Angulo’s scored a brace on his debut to guide FC Goa to 2-2 draw against Bengaluru FC.

After Cleiton Silva bagged a goal in the 27th minute to put Bengaluru ahead leading 1-0. After the break, Juanan doubled the lead with a volley in the 57th minute. But FC Goa showed grit soon after as they turned the match on its head in 3 minutes. Igor Angulo scored twice in the 66th and the 69th minute of the match to snatch a point from Bengaluru. 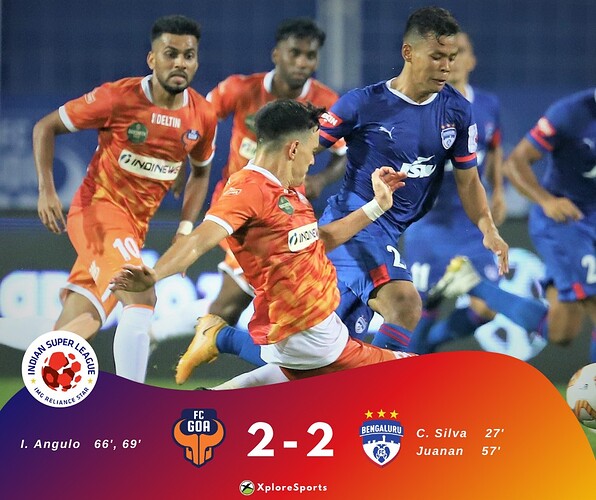 Igor Angulo, FC Goa’s star player of the night, picks up the Hero of the Match award!

Alexander Jesuraj gets the DHL Winning Pass of the Match for assisting FC Goa’s equaliser!

Both clubs in their second season and both clubs were in similar situations last season. FC Odisha faired slightly better at 6th on the Table with 25 points while Hyderabad FC were at the bottom of the table (10th) with 10 points.

It will be interesting to watch them this season with new leadership at the helm and an ambition to perform better than their previous campaign. 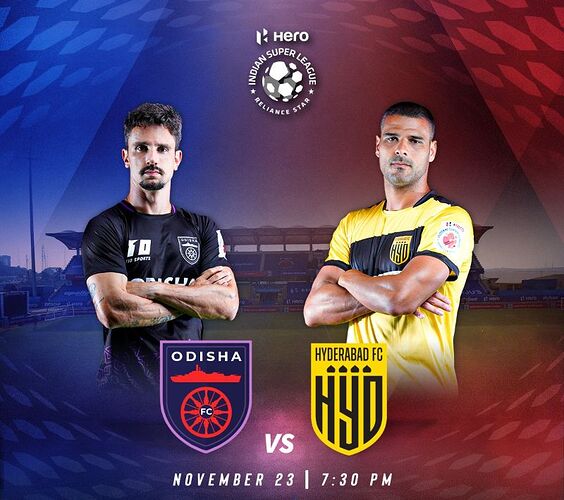 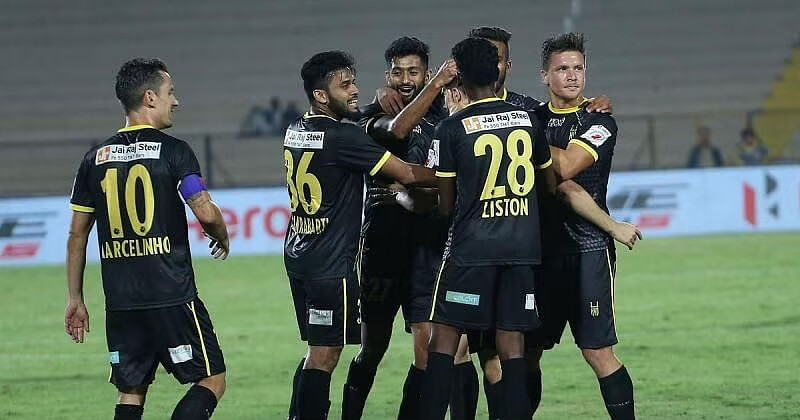 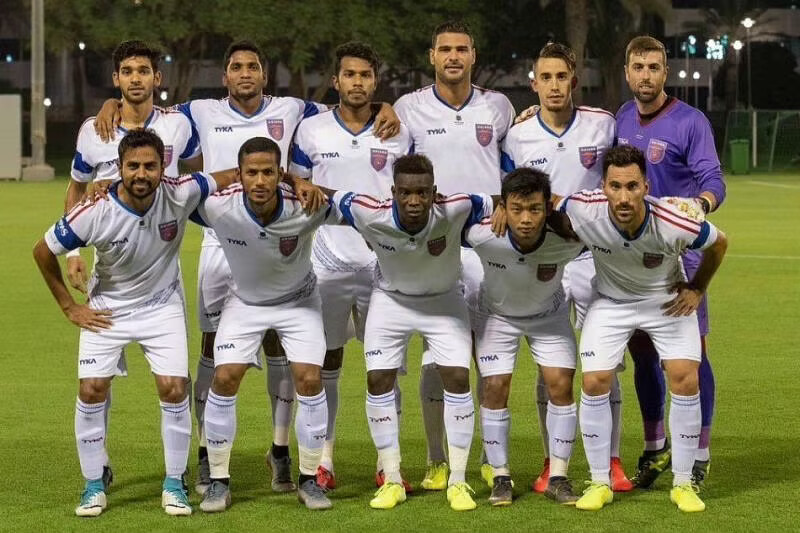 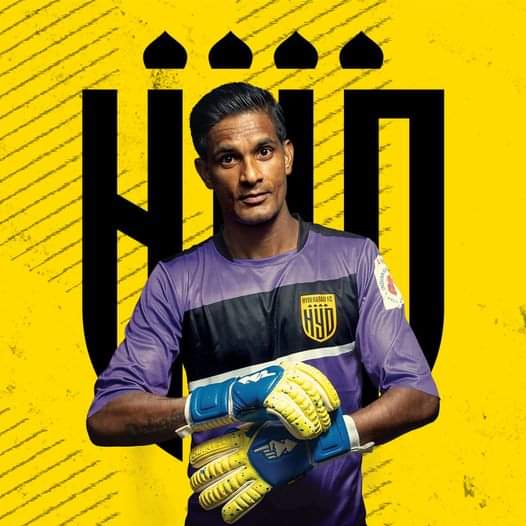 Hyderabad FC start its ISL campaign with a win over Odisha FC at the GMC Stadium in Bambolim.

HFC captain Aridane Santana scored the only goal of the the match in the first half after his counterpart Steven Taylor handled the ball inside the box.

Apart from couple of late moments, Odisha looked rather clueless with what to do with the ball. Hyderabad were dominant through, where Colaco and Narzary could have even scored. Santana’s penalty does the trick in the end, and with this disciplined display, Hyderabad have their first-ever clean sheet in their ISL history. 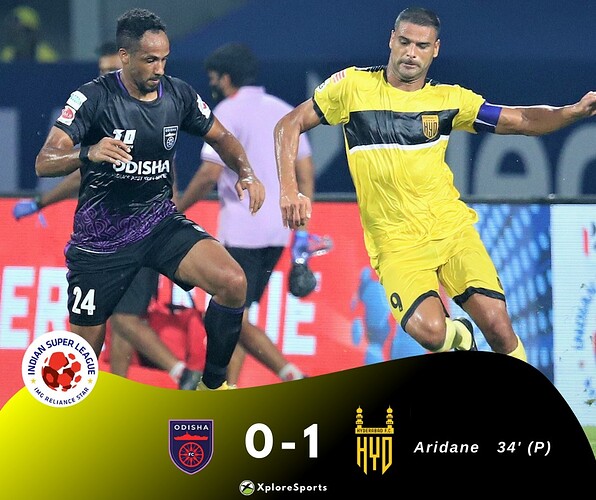 Hyderabad FC coach Manolo Marquez announced defender Adil Khan as the club’s captain for the upcoming Indian Super League season. Adil will be joined by Aridane Santana, Subrata Paul and Joao Victor who form the leadership group and have been announced as the second, third and fourth captains respectively.

On the field, the leadership group will follow the sequence, where in the absence of the first captain from action, the armband will be worn by the next captain in order. 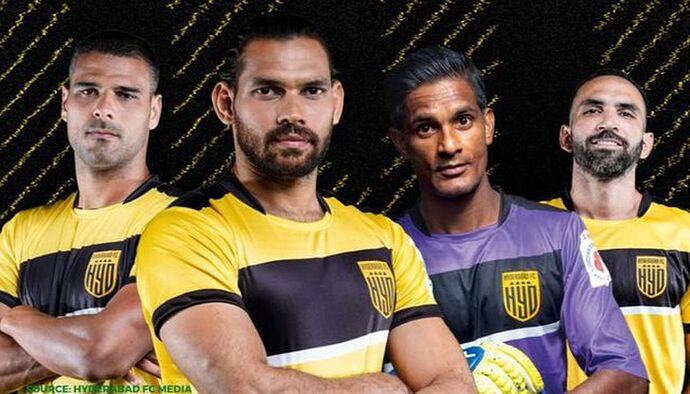 Both teams’ opening game of the campaign at the Tilak Maidan Stadium in Vasco tonight. Both sides have made plenty of changes to their squad ahead of the new season, including the head coaches and they will be looking to make a positive start to their season.

Jamshedpur FC will be led by Peter Hartley as skipper and the English defender will have the likes of Stephen Eze and Narender Gahlot to partner him in the centre-back slots. Joyner Lourenco is another player that can be expected to feature in their backline from time to time, while Laldinliana Renthlei and Ricky Lallawmawma will probably make the fullback slots their own.

They also boast a strong midfield with Aitor Monroy and Amarjit Singh slated to play integral roles at the centre. Alexander Lima, who has played under Coyle earlier and Mohammad Mobashir, who was amongst the goals in pre-season, will have big responsibilities to carry out for the team as well. New signing Jackichand Singh will also be hoping to hit the ground running, while their frontmen Valskis and David Grande will eye opening their account for the campaign in their season opener.

Chennaiyin will have Csaba Laszlo as their head coach and Rafael Crivellaro as their captain in Hero ISL 2020-21. Enes Sipovic is mostly likely to partner Eli Sabia in defence and the fullback positions will probably be occupied by Reagan Singh and Jerry Lalrinzuala. As far as their midfield is concerned, it’s safe to say that the Marina Machans are spoilt for choice.

Crivellaro and Anirudh Thapa should be guaranteed starters, while Lallianzuala Chhangte – the highest-scoring Indian midfielder last season – will be hoping for another solid campaign this time around. Chennaiyin are in truth blessed with quality in the middle of the park with Thoi Singh, Dhanpal Ganesh, Edwin Vanspaul, Memo Moura, Germanpreet Singh and Fatkhullo Fatkhuloev making up the rest of the southerners’ options to choose from. Up front, Jakub Sylvestr will need to carry the burden of replacing Valskis as Chennaiyin’s leading scorer from last season and he will be hoping for some support from Esmael Goncalves. 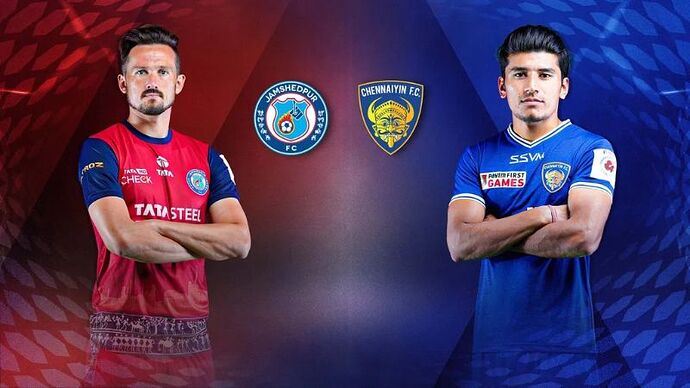 Chennaiyin FC has two titles to its name while Jamshedpur FC has finished 5thin the league stage twice in 2017-18 and 2018-19 seasons. 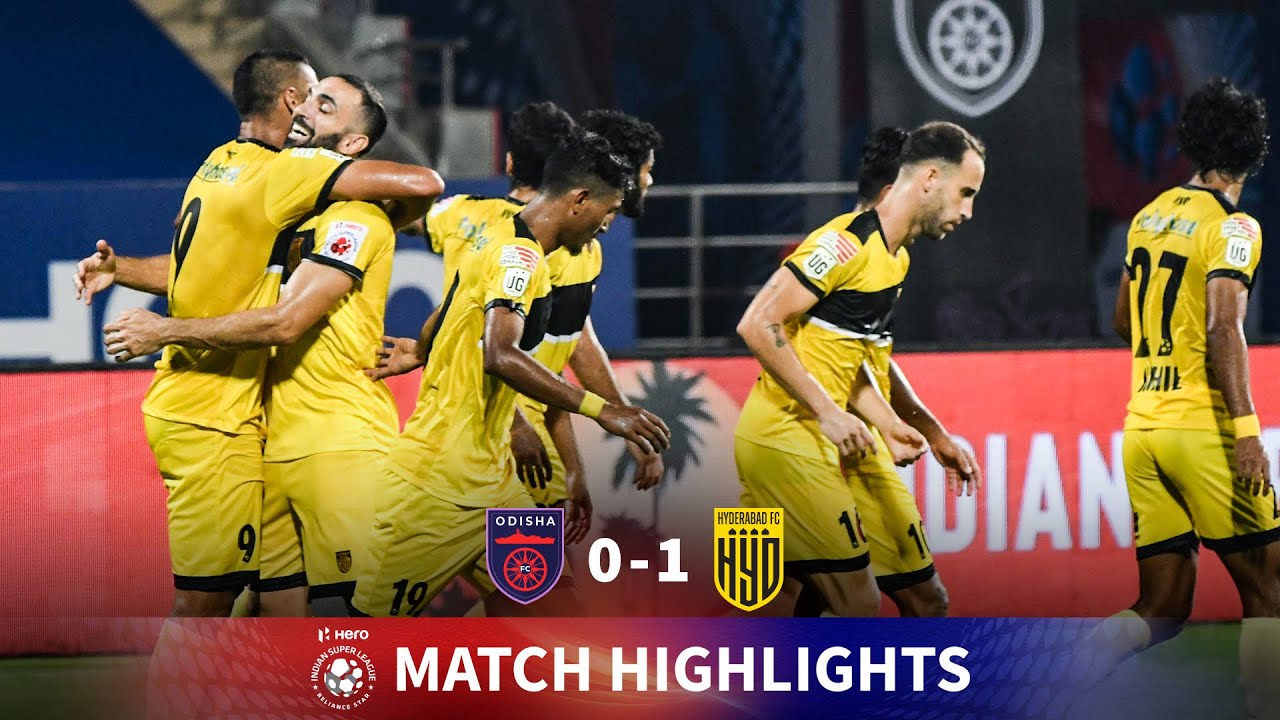 Chennaiyin FC rides on goals from Anirudh Thapa and Esmael Goncalves. With less than a minute from the kick-off, Chennaiyin was a goal up, which was the fastest in its history and of this season.

Valskis scores for Jamshedpur. It’s a goal made by two of Jamshedpur’s new signings as Jackichand Singh delivers a peach of a cross for Valskis to nod in. 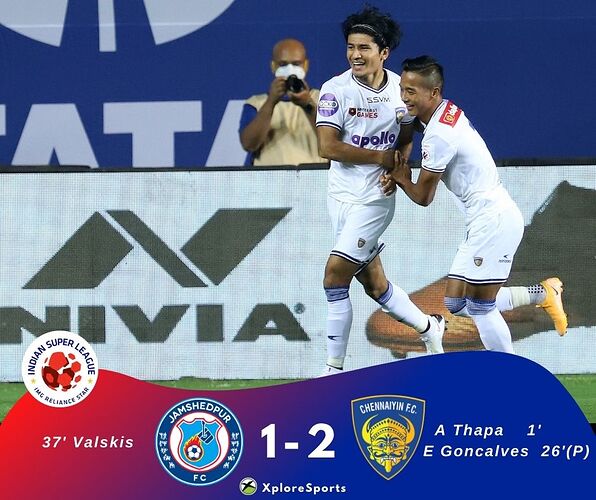 Thapa struck in the 52nd second to also become the first Indian goalscorer of the ISL 2020 season.
Thapa gets the Man of the Match award for the impressive performance. 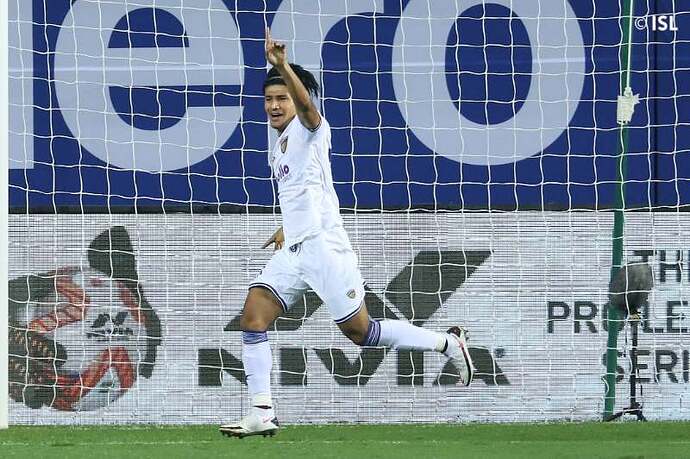 Anirudh Thapa, who has won the ISL title with Chennaiyin in 2018, has made 55 appearances in the tournament and has scored three goals and recorded nine assists. The 22-year old has also made 18 appearances for the Indian national team and scored two goals and has two assists. 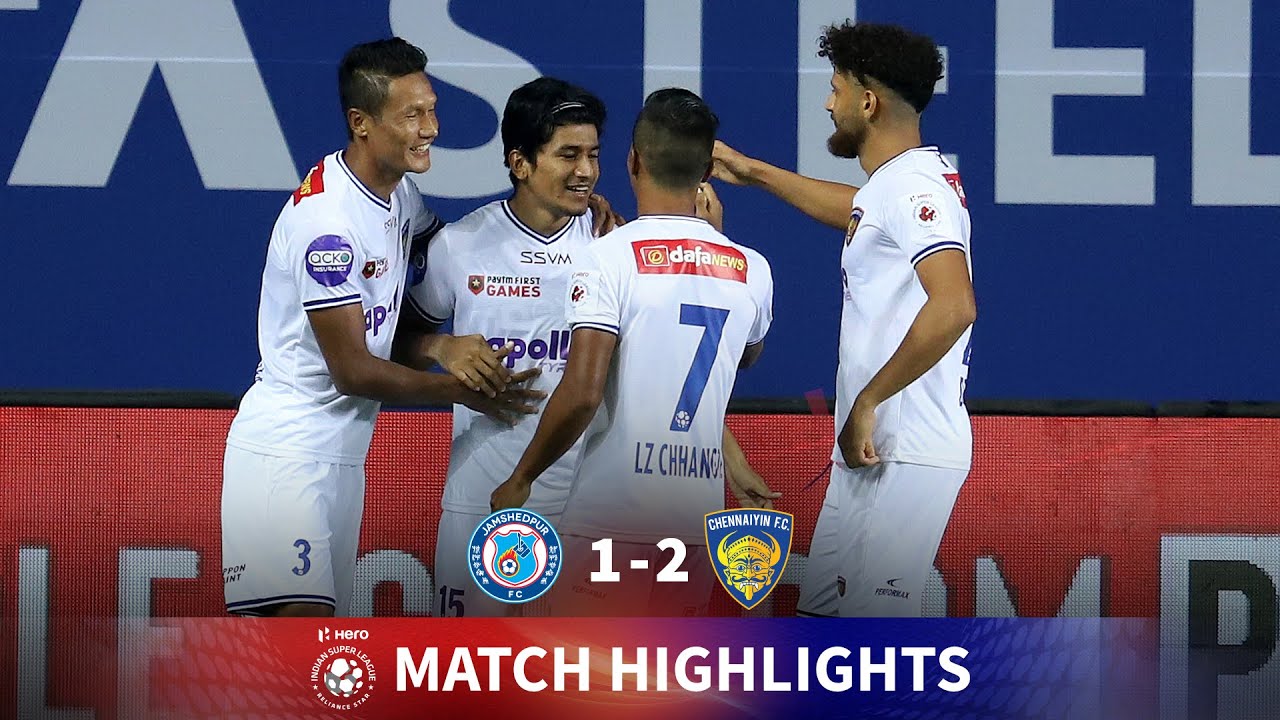