After a high-flying finish in the 3rd ODI, where Team India handsomely registered their first win of the tour, the Men in Blue are set to begin the three T20I match series from today December 4th. The other 2 T20Is will be held on December 6th and 8th.

The second white ball series will be a tight knit contest as both teams will take on the field with renewed focus and motivation to turn the tide in their favor ahead of the all-important test matches.

Can India win the T20I series to level the competition? 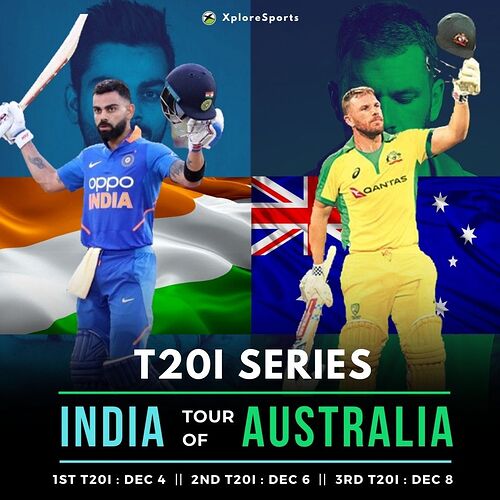 IND’s BEST XI might not PLAY the T20Is against AUS? | Super Over with Aakash Chopra 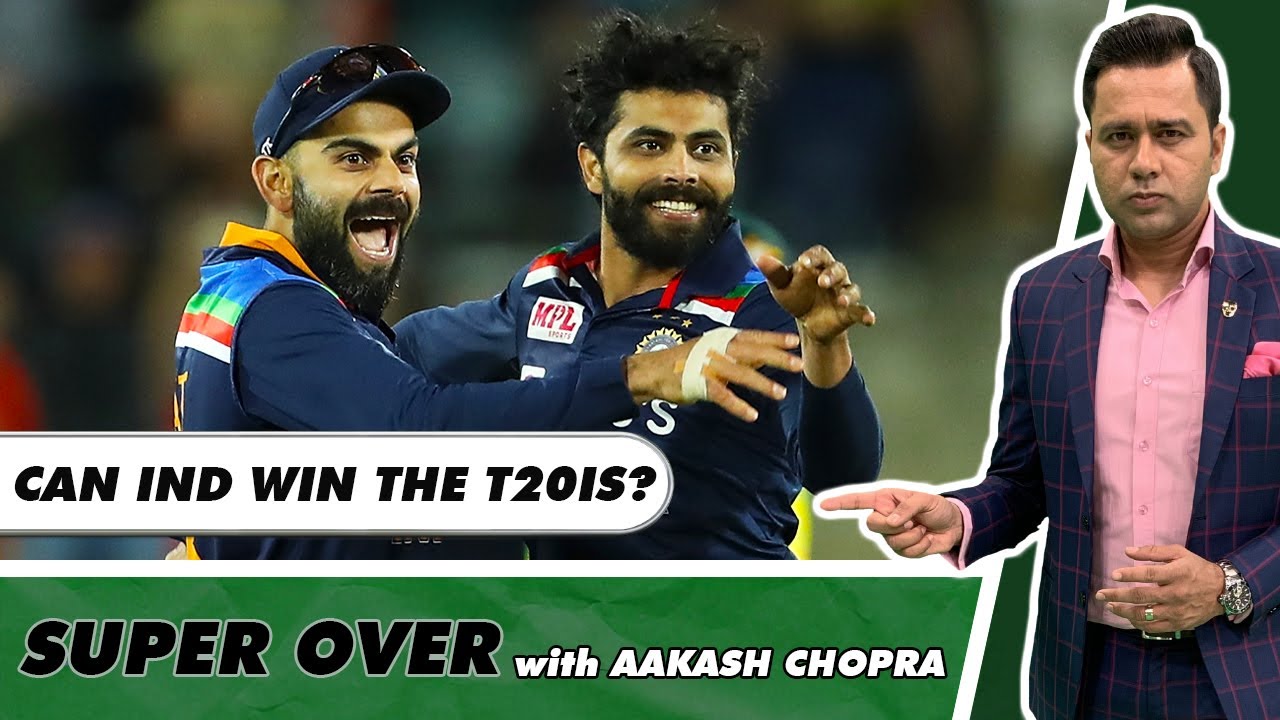 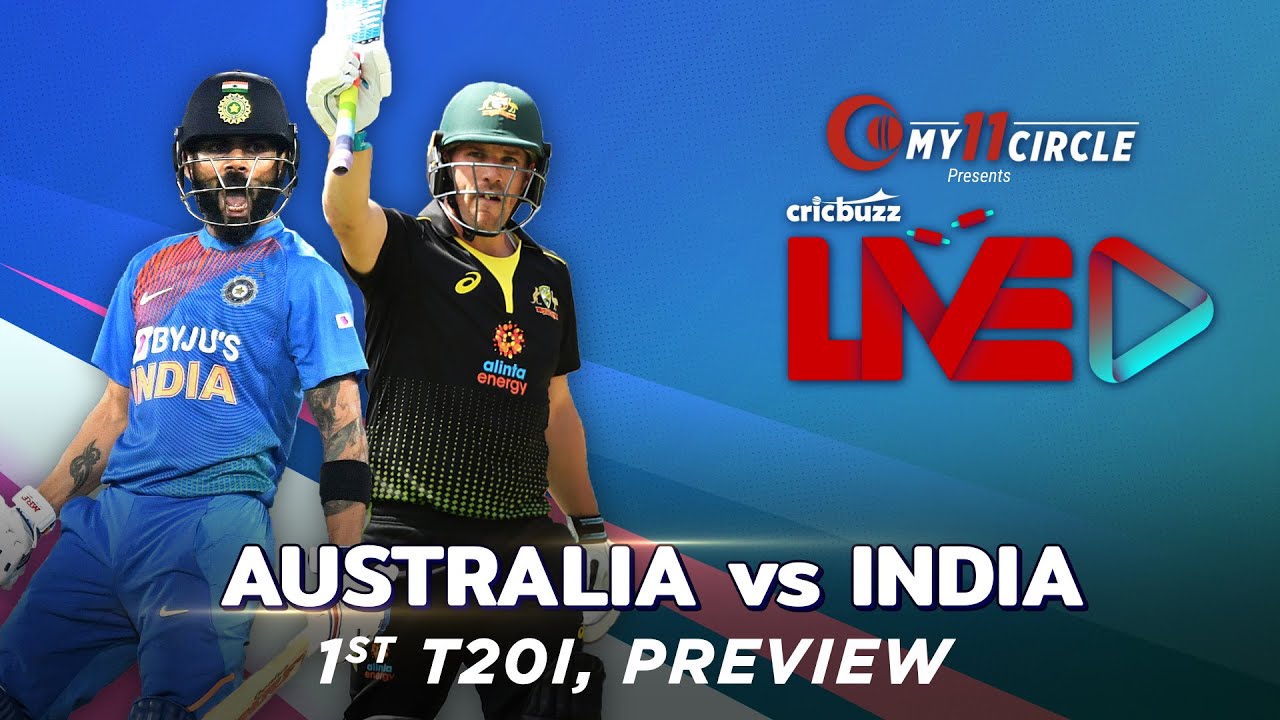 Australian team will wear this new Indigenous kit in the T20I series. 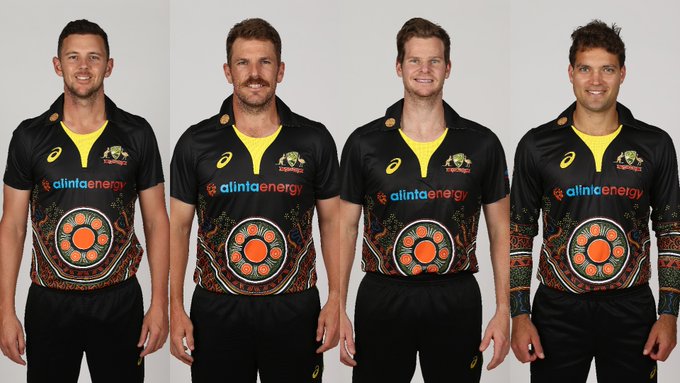 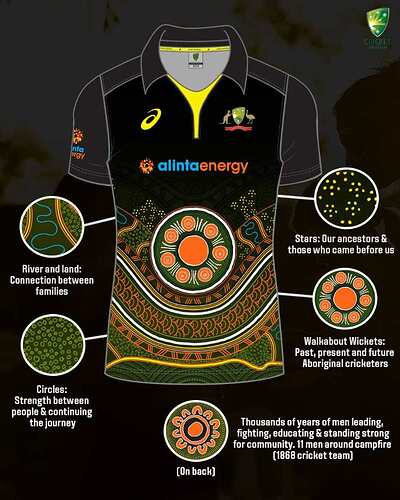 India take on Australia in the opening game of a three-match T20I series at 1.40 pm IST today at Manuka Oval, Canberra.

Going into this series, there will be changes in the playing XI of both the teams. Marnus Labuschagne isn’t considered to be a T20 specialist and he will be replaced at the top. The right-handed batsman had opened the innings in the third ODI.

For India, Deepak Chahar is confirmed selection in the playing XI. He is likely to come in for Jasprit Bumrah, who is expected to be rested. Yuzvendra Chahal will also be back into the playing XI in place of Kuldeep Yadav, who isn’t part of the T20I squad. KL Rahul will open the innings with Shikhar Dhawan.

In 20 T20Is between the two countries it is 11-8 in favour of India although Australia won the previous series 2-0 in India.

The last time two teams locked horns in a T20I series in Australia, the series ended at 1-1. Two years before that, MS Dhoni-led India had whitewashed Australia 3-0.

Follow the match here along with me: AUS vs IND 1st T20I Scorecard 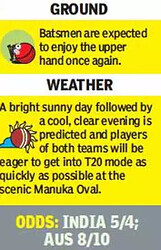 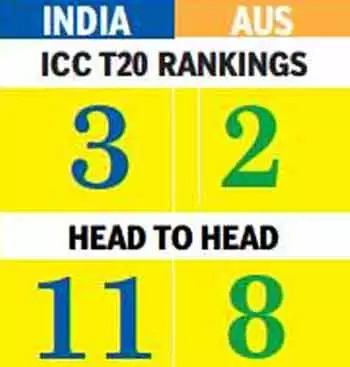 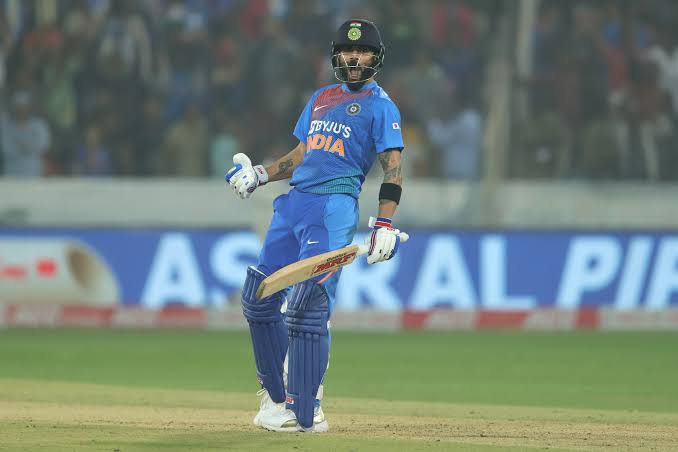 KL Rahul holds the key for Team India who are losing wickets at regular intervals.

Another late assault by Jadeja enabling a big finish for India. But, India will be worried about his hamstring. Let’s see if is able to take field in the 2nd innings.

An amazing impact innings from Jajdea, who slammed 44 off 23, has given India a defendable score at the Maneka Oval. 11 came from the final over. 34 came from the last two.

Yuzvendra Chahal will take the field in the 2nd innings as a concussion substitute. Jadeja is currently being assessed by the BCCI Medical Team.

India take the opening game of the T20I series against Australia.

India defeats Australia by 11 runs in first T20I in Canberra to take 1-0 lead in three-match series.

The duo finished with 3 wickets apiece to help Team India register a win which seemed unlikely at one stage. 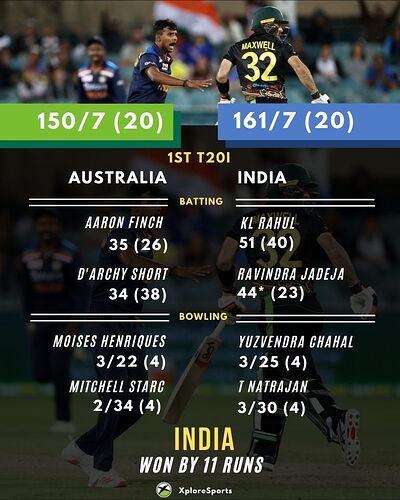 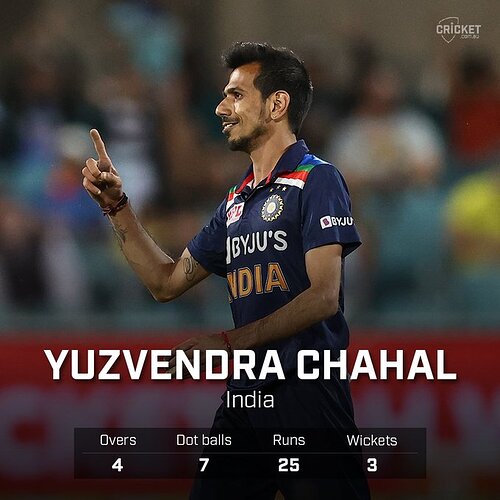 India’s T. Natarajan impressed on T20I debut with 3-30 from four overs in his side’s series-opening victory at Manuka Oval in Canberra. 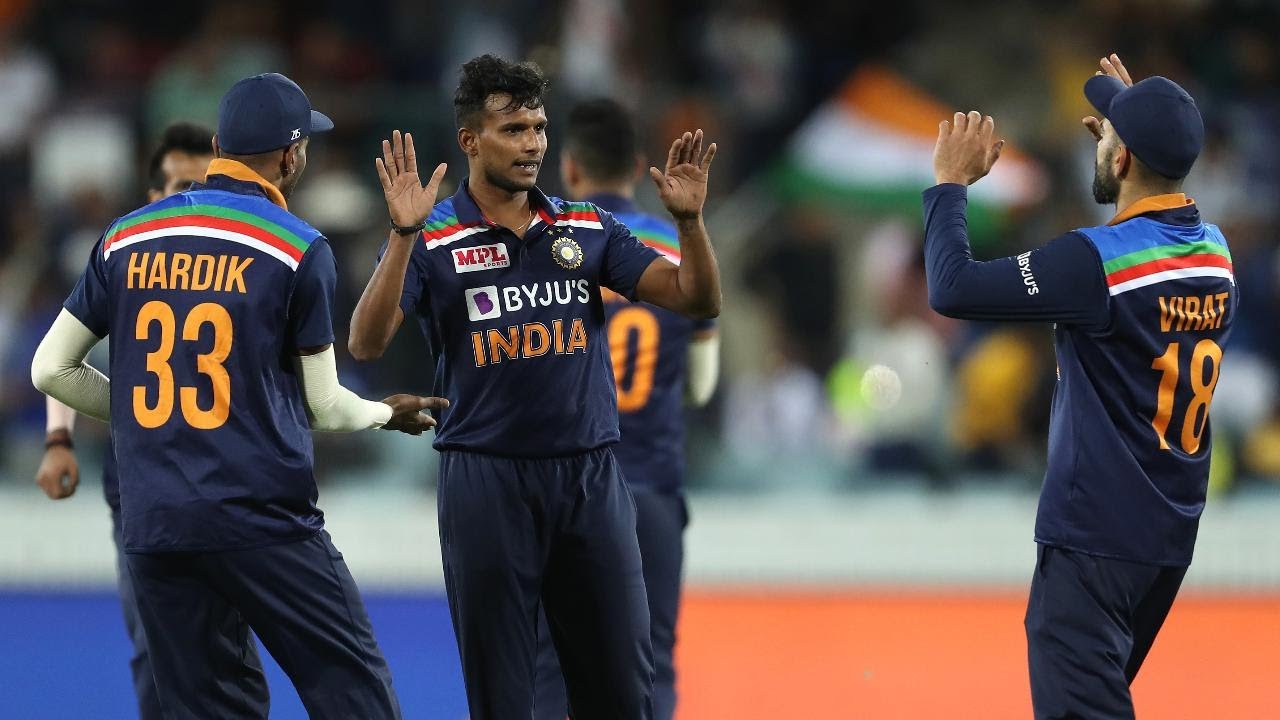 India produced a gutsy comeback to claim victory by 11 runs over Australia as Yuzvendra Chahal starred with the ball after coming into the game at the halfway point as a concussion substitute for Ravindra Jadeja who posted an unbeaten 44. 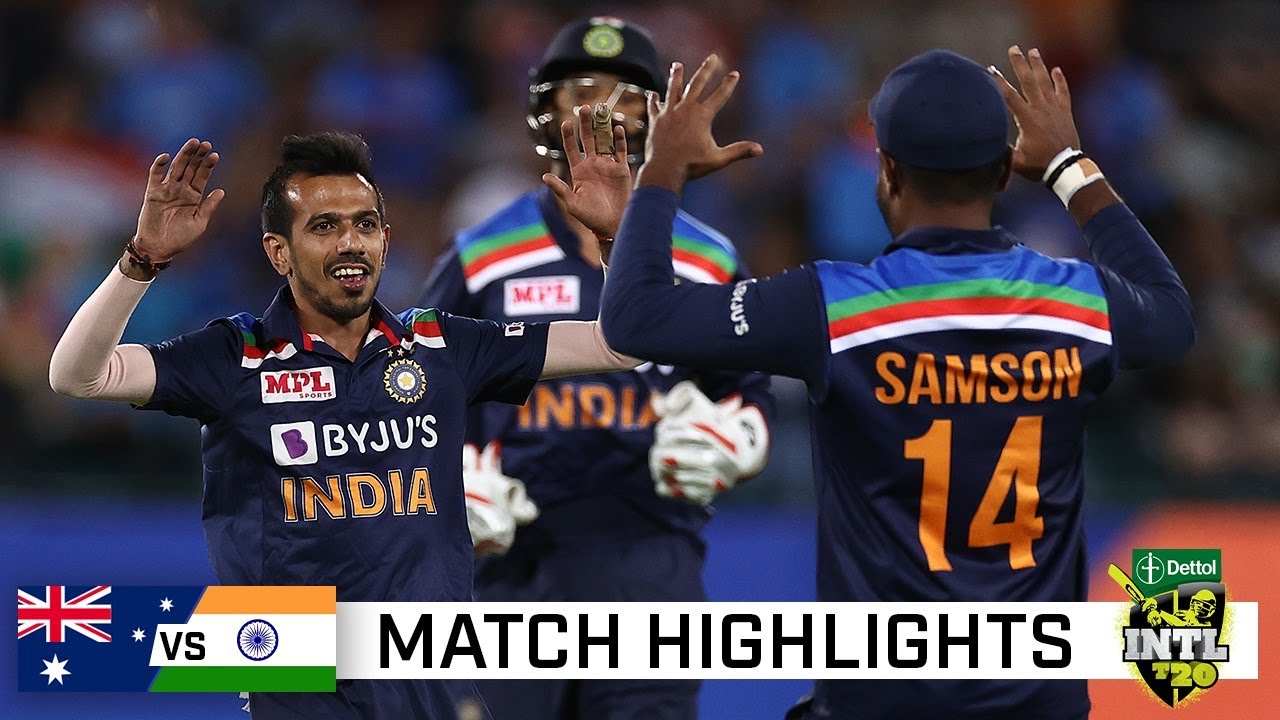 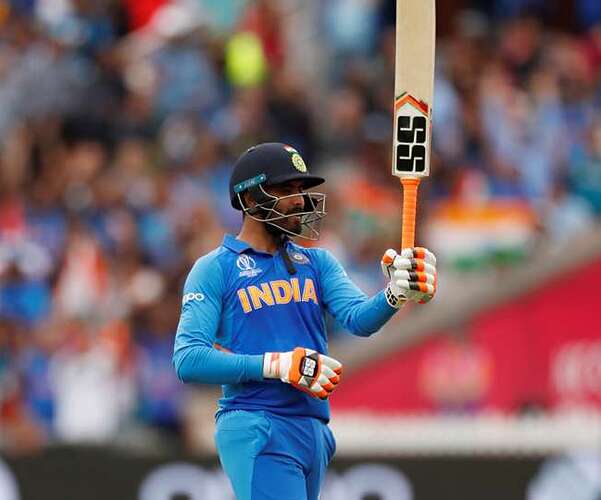 Indian all-rounder Ravindra Jadeja on Friday surpassed former skipper MS Dhoni’s record of the highest score by an Indian batting at number 7 or below in the T20 Internationals during his handy 44-run knock against Australia in the first T20I.

Dhoni had scored 38 runs in just 18 balls against England at the Wankhede Stadium in 2012. Jadeja, who came out to bat at number 7 smashed 44 runs off just 23 balls. The innings included one six and five fours.
Jadeja came out to bat at a time when India had lost half its side for just 92 on a batting pitch with short boundaries. The southpaw gained momentum in the final overs and India managed to go past the 160 mark.

India are 1-0 up after an 11-run win in the first game.
Shardul Thakur, inducted in the T20I team after Jadega suffered concussion.

Finch joins David Warner (groin) and all-rounder Marcus Stoinis (side) on the injured list. With vice-captain Pat Cummins rested ahead of the India Test series, Smith along with Matthew Wade are the only possible choice to replace Finch as the captain.

Steve Smith was banned for two years from a leadership role in the Aussie team following the infamous “Sandpaper gate”, which was ball-tampering scandal in Cape Town.