This hyderabad team is beautiful. They are playing like an well oiled machine. This team is defending well, passing well and attacking well.

Hali, ashis, akash, Liston these are indian player and playing like champion. This team is a gift to indian football. The free kick that liston took was more than beautiful, simply world-class. Hali could have done a hat trick if arshdip didn’t save those beautifully.

Talking about OFC, they just weren’t allowed to play. Let’s enjoy this beautiful game. Really this type of football in indian circuit is really overwhelming.

Alexander saves OFC. What a finish!! More than brilliant. This goal was tonic for OFC. The total game changed. Jerry is becoming a phenomenal midfielder.
Introduction of NUNDA was also very impressive.

Actually OFC has only one problem, that’s their defense. Bora and sajid was ordinary. Onwu was not up to the mark.

Hali got injured, hope that he will be back soon. Sana and yasir was good. In one word this game was fantastic.

One thing I have to mention, that is AKASH MISRA. 3 goal line saves my word. He is the reason why HFC got 1 point. 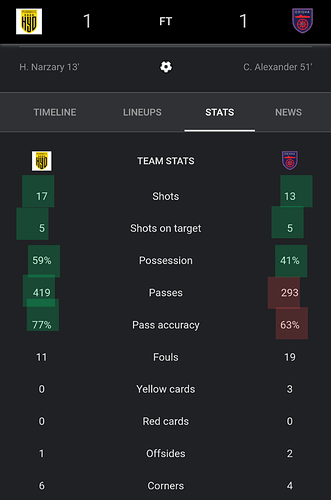 Hyderabad FC vs Odisha FC match ends all square as the Kalinga Warriors display an inspired performance in the second half to deny the Nizams all three points. 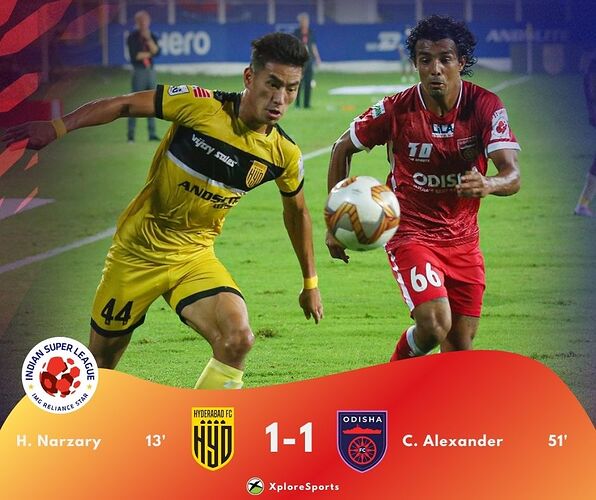 Odisha FC registered a passing accuracy of 63.6% in their match against Hyderabad in the Indian SuperLeague, their least since the 2019/20 season. 185 of their 291 passes were successful. Inaccurate. 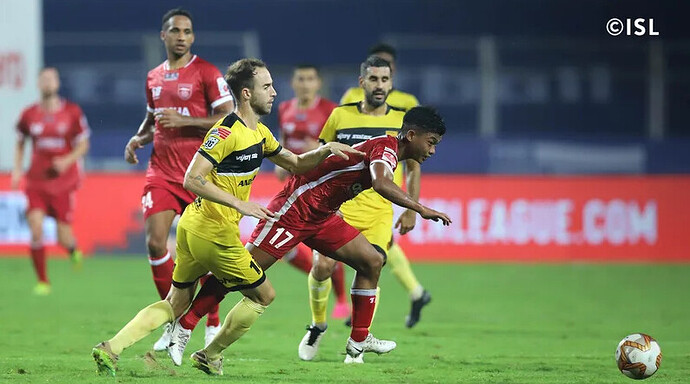 Cole Alexander wins the Hero of the Match award!

For scoring the vital equaliser with a deadly strike 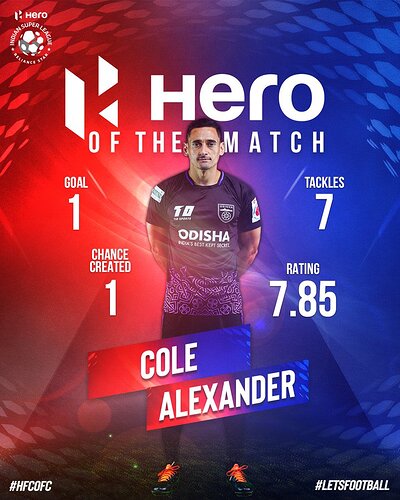 Halicharan Narzary and Cole Alexander got on the scoresheet… 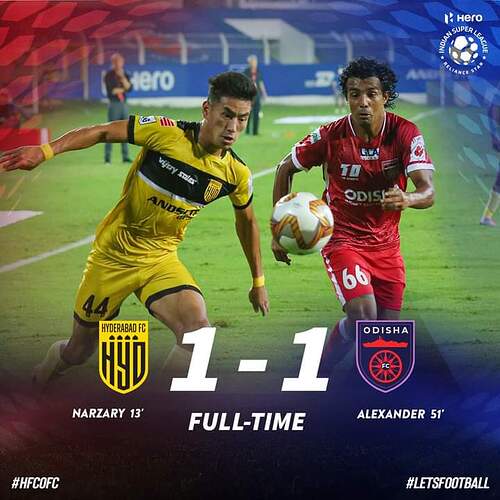 Odisha FC cancelled out the slender lead taken by Hyderabad FC in the first-half to settle for 1-1 draw in the Indian Super League clash.

Hyderabad FC are on the fourth place with 17 points while Odisha remain at the bottom with seven. 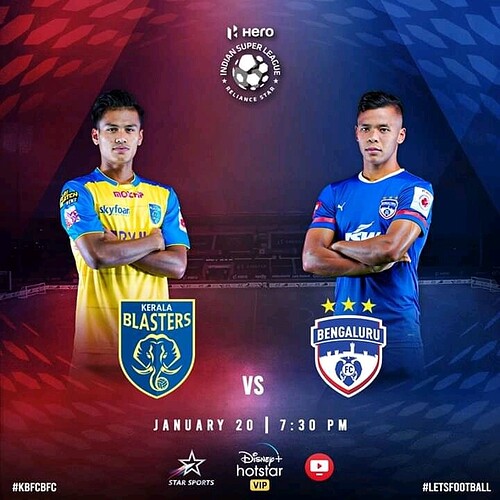 Kerala Blasters FC and Bengaluru FC, both of whom are placed in the lower half of the ISL standings, will clash on Wednesday. The thrilling encounter between the two southern rivals will be held at the Goa Medical College Ground in Bambolim, Goa.

Bengaluru FC come into this clash after a string of poor results. The Blues lost four games in a row before getting a draw. It resulted in their slide down the table to the seventh spot.

Interim head coach Naushad Moosa is yet to register his first win since taking over from Carles Cuadrat.

Kerala blasters Head coach Kibu Vicuna will aim to exact revenge in the reverse fixture at Bambolim. The Blasters lost to their familiar foes by a humiliating 4-2 margin in their last face-off.

But Kerala Blasters come into this encounter on the back of positive results. They defeated Jamshedpur FC in a spirited fashion and drew with an in-form SC East Bengal.

Kerala Blasters FC will look to ride on the momentum and clinch the win over Bengaluru FC.

The two sides have always been involved in high-octane clashes ever since the Blues made their way to the ISL.

Bengaluru FC enjoy a heavily lopsided advantage in the head-to-head clashes against the Blasters. In their seven meetings, the Blues have won five times. Kerala Blasters FC have won just once whereas one match between them has ended in a draw.

Fewest Goals Conceded in the ISL this season. 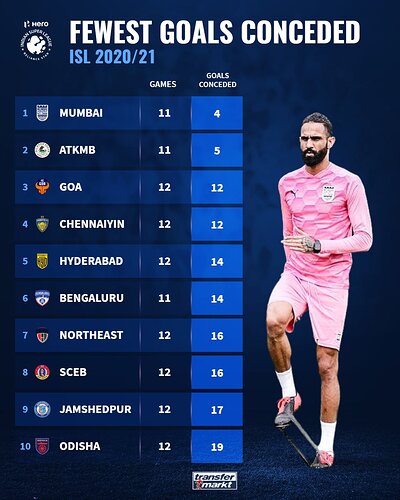 changes to it’s XI with Juande getting his first start, while Bengaluru fc make 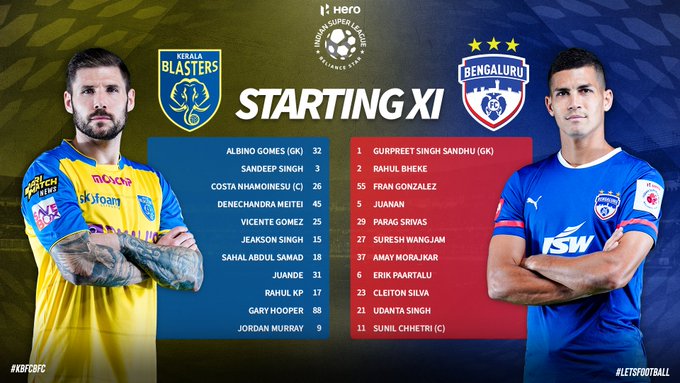 different players have scored a

Will we see a new name on the scoresheet tonight? 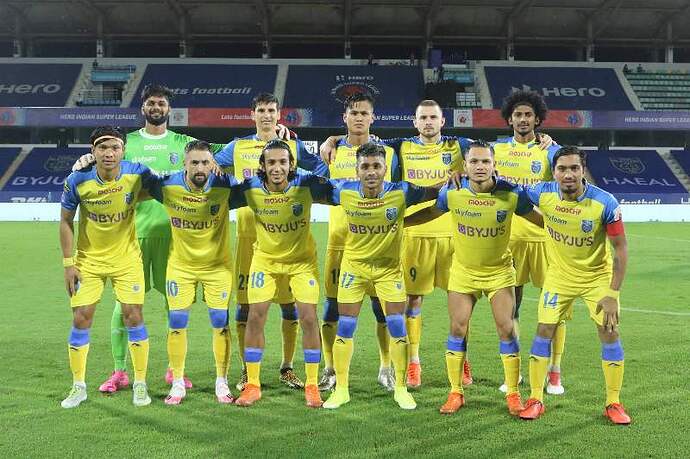 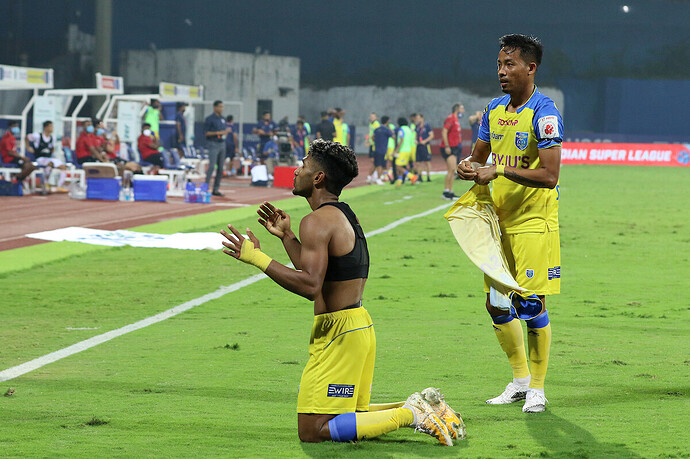 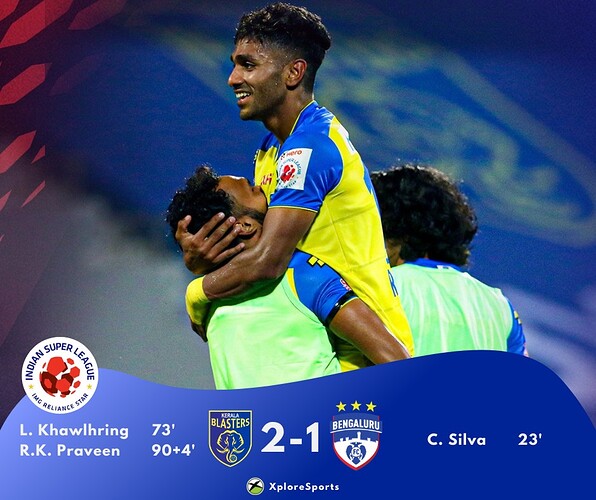 Kerala Blasters came back from behind to rivals Bengaluru FC 2-1 in an Indian Super League (ISL) clash on Wednesday at the GMC Stadium, Bambolim.

Cleiton Silva had given Bengaluru the lead in the 24th minute but Puitea (73’), who came on as a substitute in the second half, brought Kerala Blasters back in the game. Rahul KP (90+4’) then netted the late goal to seal crucial three points for the Yellow Army.

Kerala Blasters move up on the league table eclipsing East Bengal to the ninth position with 13 points from 12 games. Bengaluru, on the other hand, remained on the seventh position, same points as Kerala. 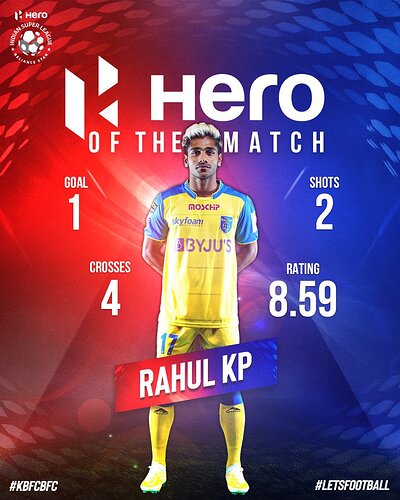 Kerala Blasters take home the club award after their come from behind victory against Bengaluru FC. 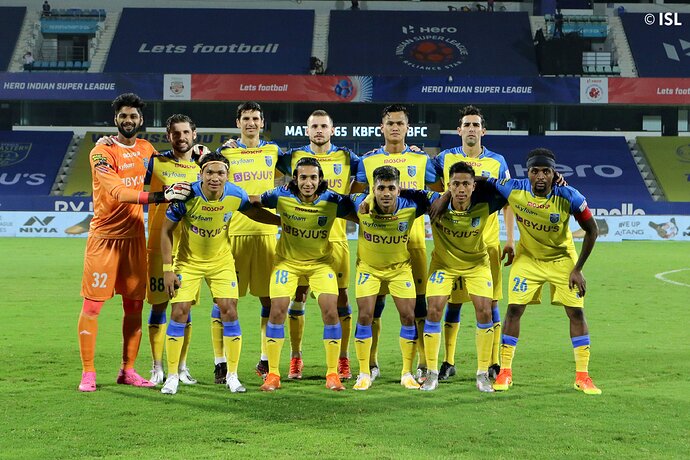 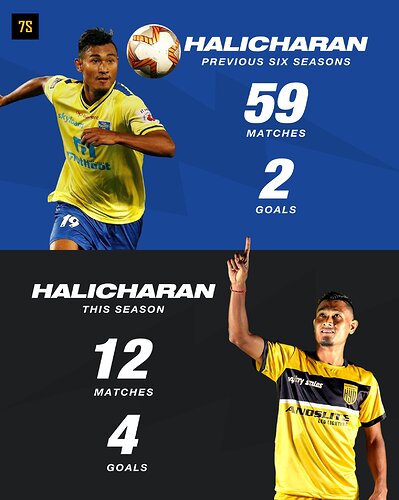 Do not have data of other players to give a definite answer to this but from the above historical data it does seem Halicharan is showing a supersonic improvement this season…quite impressive!

A thrilling contest between two South Indian Rivals was on the menu in tonight’s Hero ISL match in Bambolim! And it served up a treat as Kerala Blasters FC came from behind to stun Bengaluru FC 2-1. The Blues led through Cleiton Silva’s acrobatic strike. Kibu Vicuna’s side came out determined to fight back and drew level through Lalthathanga Khawlhring in the 73rd minute. But the winning goal would arrive in injury time as Rahul KP completed a scintillating counter attack to secure all three points for the Blasters! 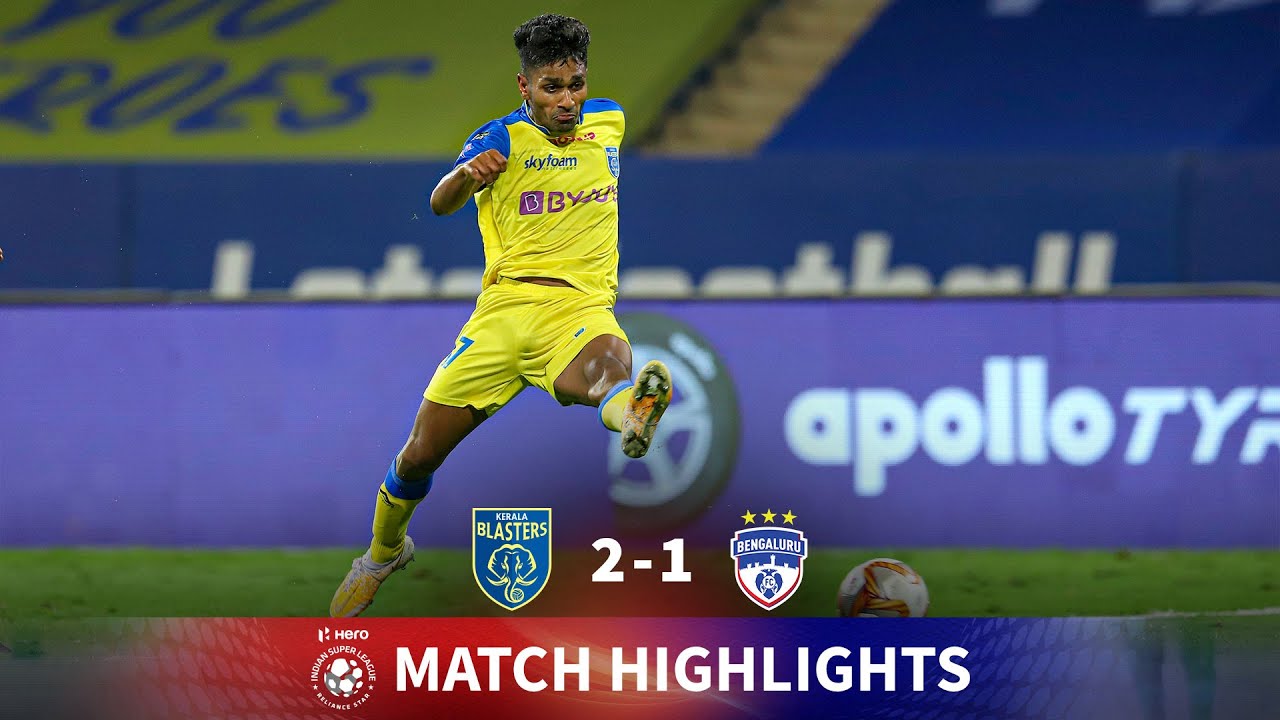 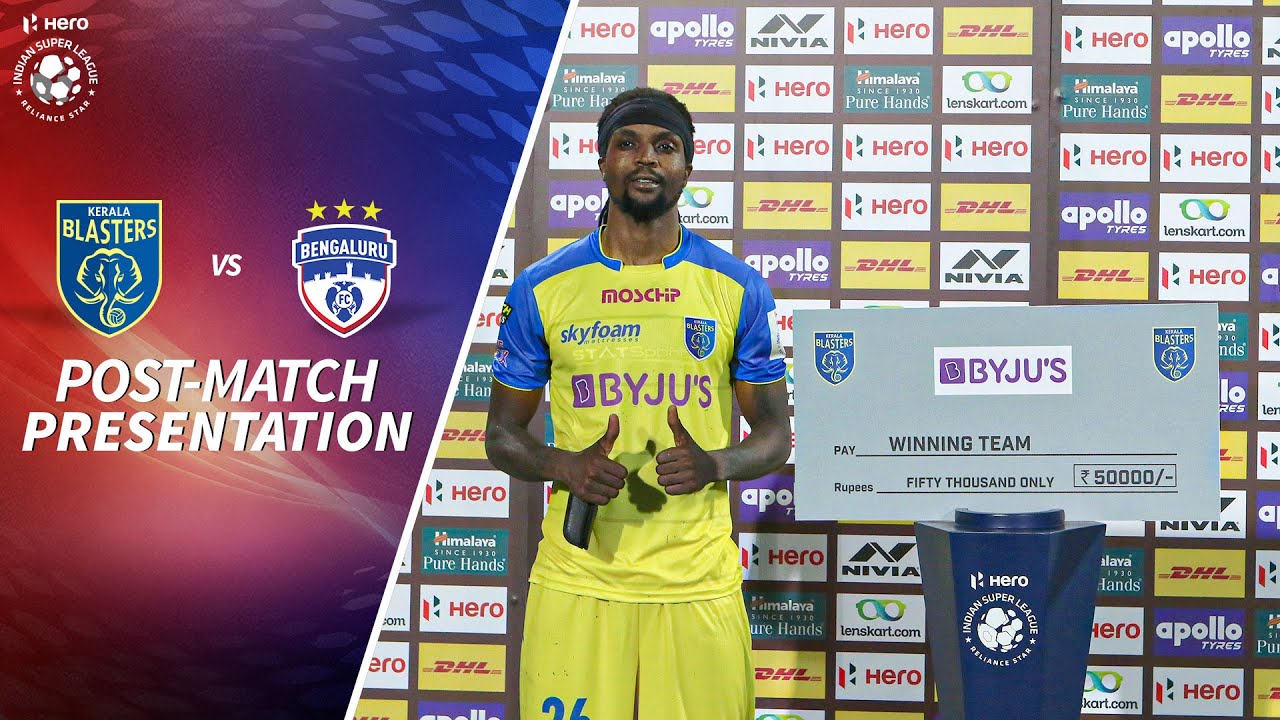 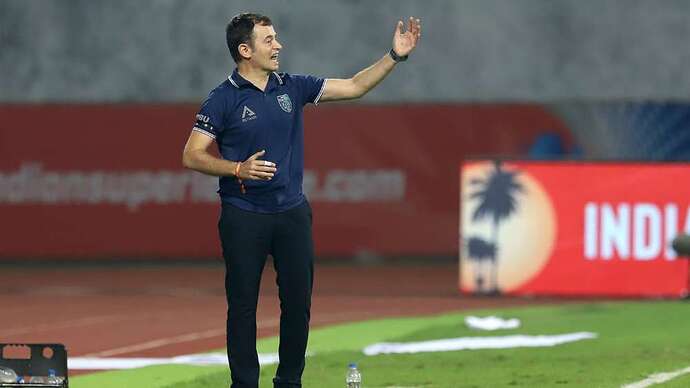 Coach Kibu Vicuna was highly impressed by his team’s commitment and suggested that he was pleased to get an important win.

“The attitude, commitment of the players is very important in our team. We had a very good attitude in the last three games. It was a difficult game today (Wednesday) because Bengaluru have very good players. They scored a goal from the one chance they got. We know that they are strong with their throw-ins but we came back and we are happy that we got three very important points,” said Vicuna.

The I-League winning coach hailed the ‘never-give-up’ attitude of his players and felt that is what earned them the win over Bengaluru.

“It is an important win because now we have 13 points, in the last three matches, we got seven points and also the way we came back with this never give up attitude (was pleasing). Now we have to get the players recovered because we play again in another three days.”