Who are the player's you feel will perform well at the upcoming 2022 world cup?

World cup is around the corner, players preparing for the big event around the world, countries across the world, this is gonna be a great event in the history of football

For me I have five favorite professional footballer who am looking up to perform extra ordinary, let me say fame of beauty

at the world cup.

Officially acquired by Real Madrid right after his 18th birthday, Vini Jr. took some time to burst on to the scene with Los Blancos. Still only 22 years old, the Brazilian had been getting regular minutes at the Santiago Bernabeu since the 2019-20 season, but it was the 21-22 campaign where he really exhibited that star potential.

He went from six goals and seven assists the year prior to a whopping 22 goals and 20 assists last season, one in which his team came away winners of La Liga and the UEFA Champions League. Vini was arguably the second-most valuable player during their tremendous season, behind only Karim Benzema, the eventual Ballon d’Or winner.

For Brazil, he’ll have a similar role to play with Neymar of Paris Saint-Germain fame the linchpin in attack. This will give Vini the freedom down the left to create and push into space, where he’ll undoubtedly cause problems for Serbia, Switzerland and Cameroon’s defenses. 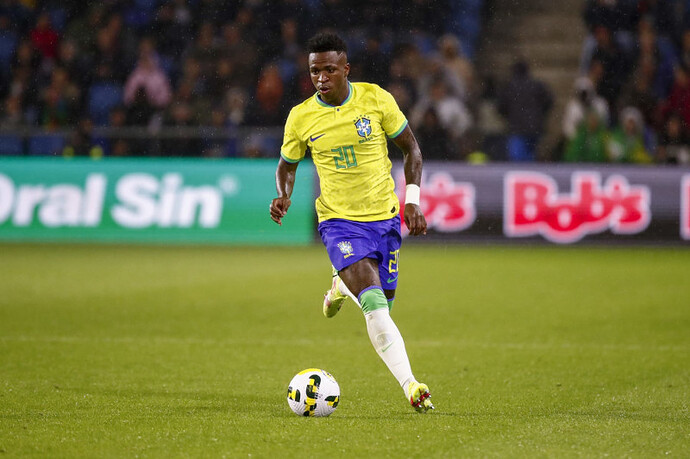 19 years old Musiala will be the player to watch in the German squad at the World Cup.

Musiala has bossed the midfield at Bayern. His stats this season so far:

Most goal contribution in Bundesliga. 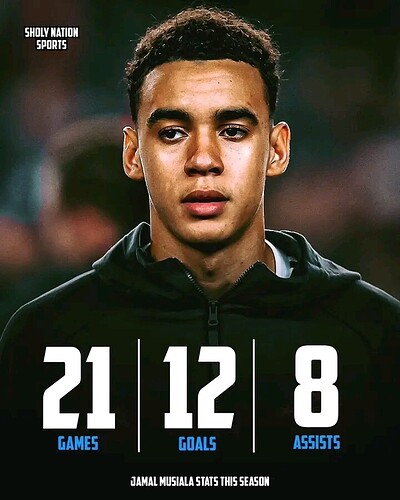 Only Few players in the world are in better form than Valverde, a hugely versatile midfielder who at the age of only 24 is making waves with Real Madrid and has become as irreplaceable for the Spanish giants as he is for his country.

Capable of performing a number of different functions in different positions, even during the course of a match, Valverde is a tireless performer with a huge work rate and has added an attacking dimension to his game.

He showed his box-to-box capabilities in the latest Madrid derby, scoring his side’s second in a 2-1 win, his fourth goal of the season to date.

The kind of player every coach dreams of having, Valverde is Real Madrid’s third striker, fourth midfielder and fifth defender rolled into one. In addition to his ability to cover every blade of grass and his characteristic Uruguayan grit, he offers vision, an eye for goal and a gift for reading the game. 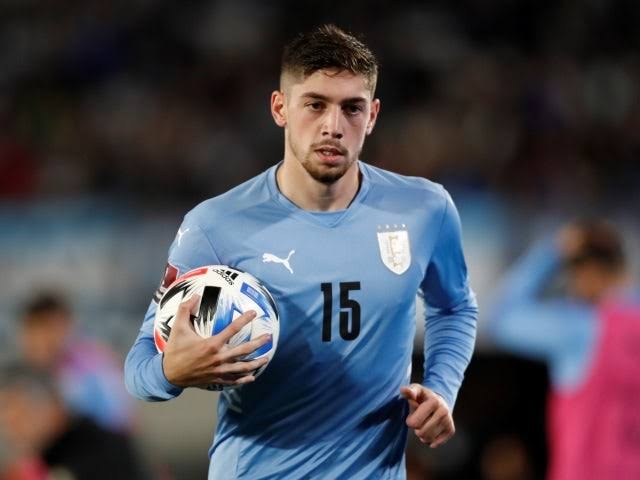 Argentina is predicted to win big at World Cup by EA Sports after FIFA 23 simulation. What’s more, according to EA Sports, Messi will win the Golden Boot and the Golden Ball for being the top goal scorer and the best player, respectively, at the tournament.

EA SPORTS has got it right since 2010

Apart from EA predictions, Argentina is also among the favorite teams this time among fans world wide and the critics alike.

The PSG forward has represented Argentina at four World Cups, with the tournament in Qatar being his fifth.
Messi has won the Champions League four times, La Liga 10 times, Ligue 1 once and the Club World Cup three times at club level. He has also won the Copa America with Argentina.

Messi will be carrying a huge weight to perform this World Cup, being his last WC. I think he is in great form this season both for PSG and Argentina, just in time for the World Cup extravaganza and eye for the coveted missing World Cup trophy!

Lionel Messi for PSG this season: A prolific goalscorer and creative playmaker 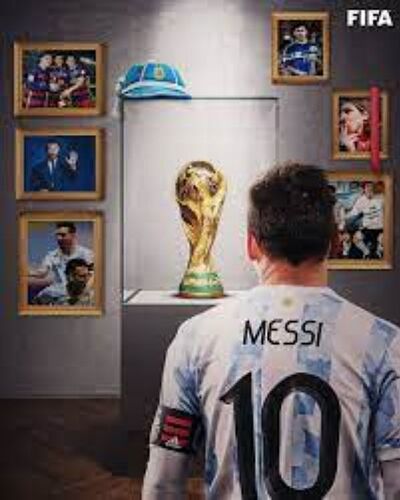 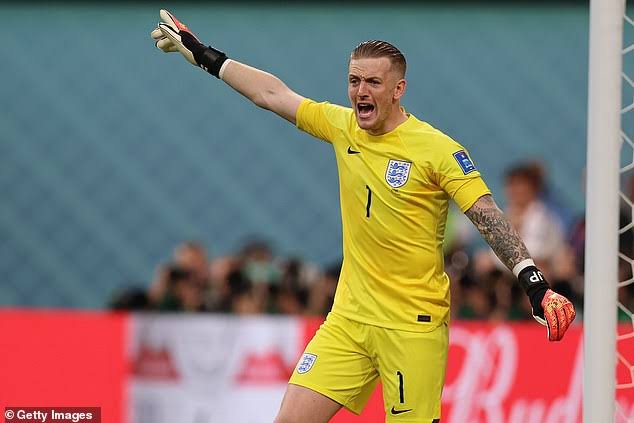 Chelsea are reportedly eyeing up a potential transfer move for Everton and England star Jordan Pickford.

The Blues are set to monitor the goalkeeper at the upcoming 2022 World Cup, with Graham Potter keen to bring in an upgrade on unconvincing duo Edouard Mendy and Kepa Arrizabalaga.

Pickford has been a top performer for Everton in recent years, and will also surely be key for England at the World Cup as they hope to continue their fine recent run in major international tournaments.

If Pickford can impress again for Gareth Southgate’s side, it could soon earn him a big move to Stamford Bridge.

Next on the list is Vini’s teammate at Real Madrid, a man who contradicts any and all theories of aging, 37-year-old Croatia talisman Luka Modric. Even with Los Blancos bringing in talented young French midfield stars Eduardo Camavinga and Aurélien Tchouaméni in recent months, Modric has been able to tally over 1,000 minutes of action so far, chipping in five goals and two assists in his 11th year at Madrid.

Sure, there’s something to be said for having that level of talent around him, and things will be slightly trickier with his national team, but Modric is supremely gifted and reads the game better than anyone else going to Qatar.

Croatia may not be able to replicate its stunning run to the 2018 World Cup final in Russia, but with Modric pulling the strings, the Vatreni cannot be counted out. 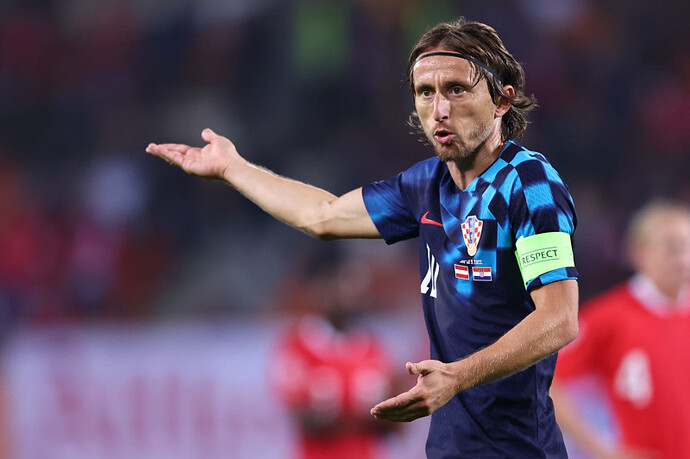 You could look at the way Neymar has been playing for PSG (15 goals and 12 assists in 19 matches) and say he could be at the top of this list. Brazil has the potential to be scary good in Qatar, and Neymar is the main reason why. Granted, he’s playing with two of the players in this top five at club level, but he’s had some serious talent around him in the past and hasn’t been clicking like this.

Somehow now in his 30s, the Brazilian superstar will be playing in his third World Cup already and is a good bet to win Golden Boot with the way this national team can pile on the goals (26 in its last seven matches, all wins). The suspected beef with Kylian Mbappé aside, he looks like he’s having fun with his football at the minute, and that usually translates into good things for Brazil. 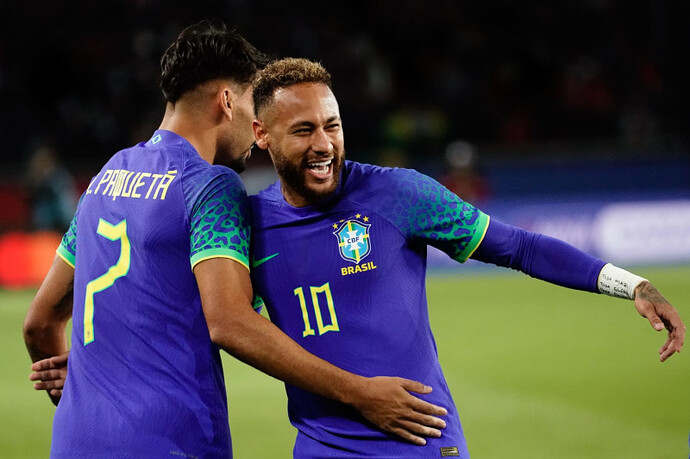 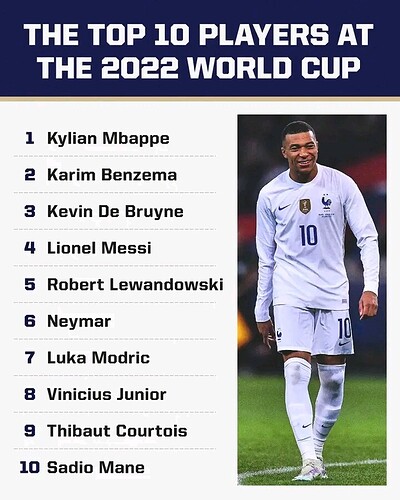 Moving away from Bayern Munich this summer was meant to slow Lewandowski down slightly after all those excellent years in Bavaria. Joining a new league in a different country with a retooling team, Lewangoalski picked up where he left off and has scored 18 in just 19 matches, with four assists to boot. Not too shabby for the 34-year-old.

If he can keep up that scoring clip all season remains to be seen, but entering the World Cup hot is exactly what the Poland national team was hoping they’d get from its best player after his move in the summer. In a group that features presumed winners Argentina with Mexico and Saudi Arabia, the Polish will think the second spot is theirs for the taking. Lewandowki’s goals and leadership could deliver just that. 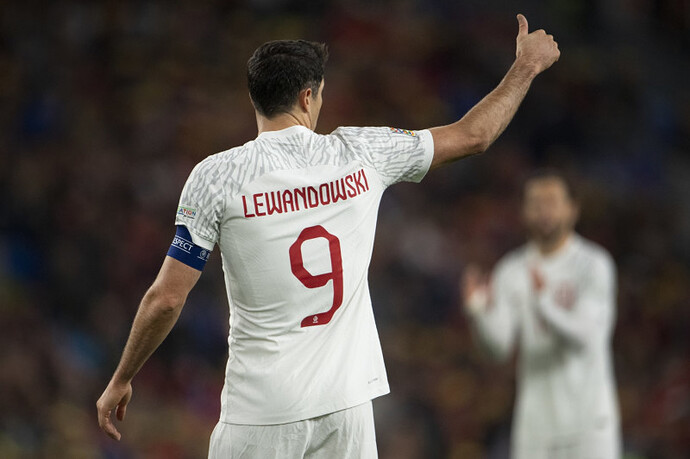 It’s a little bit odd to see Cristiano this far down any top-players list, but that’s the reality in 2022. That’s not suggesting he doesn’t have “it” anymore, but the living legend has struggled through a tumultuous first half of the season with Manchester United.

After almost forcing his way out of the club just one season after returning to Old Trafford, the 37-year-old has been in and out of the lineup and has generally been more of a disturbance than an asset to Erik ten Hag’s transitioning squad. One thing that isn’t in doubt, however, is his value and impact on the Portugal national team.

With an incredible 117 goals in 191 matches, Ronaldo is his nation’s all-time leading scorer and is integral to Portugal’s chances in Qatar—and just about everyone knows it. He’ll captain. He’ll score. He’ll assist. He’ll coach. He’ll take on a do-everything type of role that we may see the last of on the international stage following the tournament’s conclusion 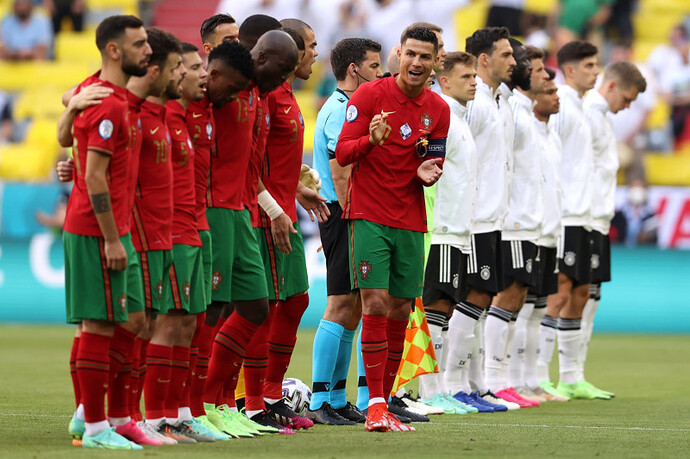 The name you’ve all been waiting for. The greatest player who has ever lived: Lionel Messi.

If he’s to win a World Cup with Argentina in what is likely his last global tournament, the 35-year-old is going into the thing hot. Like piping hot. So far in his second season with PSG, Leo has netted 12 goals and contributed 14 assists in just 18 matches. Those are good numbers.

You may be saying to yourself, “Well Mbappé and Neymar have great numbers, too!” They definitely do, but everything runs through Leo. He’s creating the chances for his other superstars and elevating the team because of it.

Similarly for Argentina, he is the unquestioned leader and focal point of the attack that clicks when he is clicking and rarely without him. Was it mentioned that he’s the best player in the world? That helps.

With a Copa America (finally) in the bag, the main thing missing from Messi’s outrageous trophy cabinet is a World Cup title with Argentina. He’ll get a good crack in Qatar as his side are heavy favorites to top their group and may only be held up by South American rivals Brazil, who can match the Albiceleste on talent. 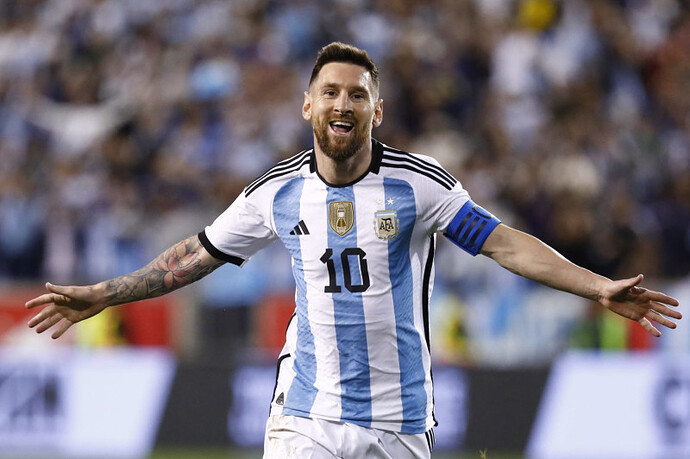 Mbappé was one of the rising stars at the 2018 World Cup in Russia, but he is well and truly rooted in the upper-echelon of the best players in the game right now. And he is only 23 years old.

After re-signing with PSG in the summer and scorning long-time admirers Real Madrid, Mbappé continues to do what he does best and basically scores goals with his eyes closed to lead the Parisians to top of Ligue 1 with a near-perfect record of 12 wins, two draws and zero losses. Like Neymar’s outstanding numbers, the French superstar has contributed a wow-inducing 18 goals and five assists in just 19 matches.

Needless to say, he’s ready for more in Qatar with Les Bleus. Four goals and an assist as a 19-year-old at the 2018 World Cup, one that France won, was an excellent start for Mbappé on the biggest stage. This current France squad is just as stacked but will have the PSG superstar as the key player in all its attacking play—even with Benzema in the starting XI. 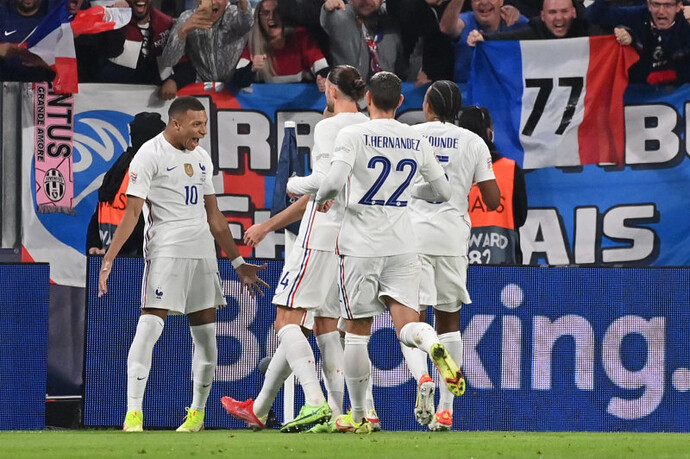