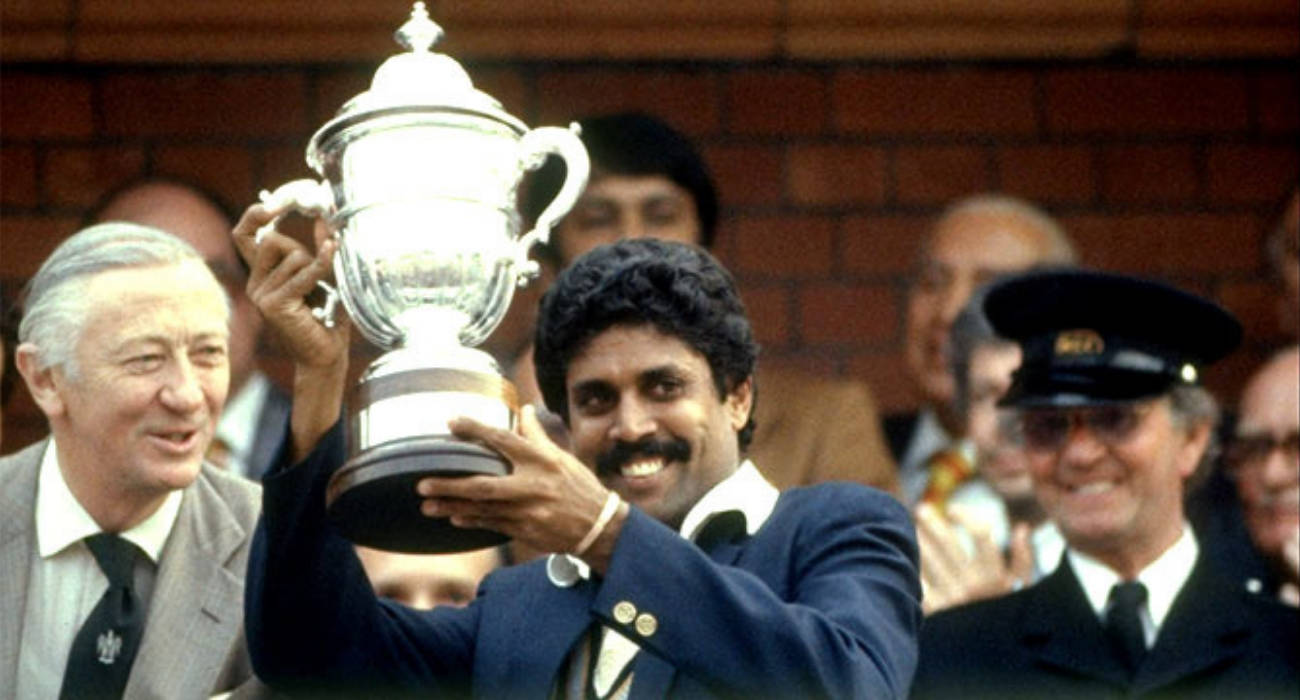 On June 25, 1983, India lifted their first-ever Men’s Cricket World Cup title when Kapil Dev-led side stunned defending champions West Indies, beating them by 43 runs in a memorable final at Lord’s.

West Indies won the toss and opted to field first against India during the summit showdown of the prestigious event. India were bowled out for 183 runs inside 54.4 overs. Indian fans had not much hope as Target of 183 seemed like a cakewalk for mighty Windies.

But, Than in turn of events that create legends, Indian unit put out an unforgettable show and bundled out the humbled Windies for mere 140. India won their maiden title at the tournament to much surprise of the cricketing world and to wild joy of Indian fans.

Catch of Viv by Kapil running back to midwicket, Fans invading the pitch after last wicket, Kapil lifting the trophy in Lord’s Gallery are the images carved out in fans memory forever.

Enjoy the highlights of the epic final.

One of the most iconic and inspiring moment in the history of Indian Cricket.

Picture of Kapil Dev lifting the 1983 World Cup is the most iconic moment in the history of Indian cricket. In the finals India were bowled out for a mere total of 183 runs from 54.4 overs. Kapil Dev’s catch of Sir Vivian Richards and the lbw dismissal of Felix Dujon were the highlights of an epic win. Indian WC dream had come true!

Kapil Dev Ram Lal Nikhanj (born 6 January 1959) is a former Indian cricketer who led India to their maiden World Cup victory in 1983 . He is considered to be one of the greatest cricketing all-rounders of all time and the greatest fast-bowling all-rounder India has ever produced.

Nicknamed ‘ Haryana Hurricane ’ as he used to bamboozle batsmen with his prodigious swing and was the Indian team’s main strike bowler for the major part of his career.

It’s now been 37 years since the way Cricket was played and viewed in India. That iconic moment when Kapil Dev lifted the coveted trophy in the Lord’s balcony, it inspired and brought together the nation with unity. West Indies the 2 time winners were the hot favourites but the Indian team collectively showed a total team effort throughout the tournament. The Rest turned history.

Kapil Dev, Sandeep Patil, Madan Lal, Mohinder Amarnath, Yashpal Sharma, Roger Binny were the key to make this happen and the players proved themselves with individual performances in crucial matches. These icons started the fruitful journey of Indian cricket and set the benchmark high enough for the youngsters to take over. The nation will forever be grateful to Kapil Dev & Co who brought the country on the global map and inspired a generation of youngsters to take up the sport. Kapil Dev’s performance throughout the tournament with both bat and ball, along with his leadership skills is what revolutionized the Indian cricket. His most impactful performance was against Zimbabwe when India were trailing at 17 for 5 and Kapil Dev delivered an unbeaten 175 off just 138 deliveries. He was also the most restrictive bowler of the match, conceding just 32 runs in his 11 overs ultimately resulting in a crucial 31-run victory for India. Thank you Team 83! You are an inspiration for all! Kapil Dev was a flamboyant captain who led team India from the front but there is another man who played a pivotal role in India’s maiden victory. Mohinder Amarnath, who played 69 Tests and 85 ODIs for India was the Man of the Match in both the semifinal and the final.

Don’t forget Kapil’s all round performance (Cup turning inning of 175, Final turning catch of Viv, Most runs for India in the tournament, 12 wickets in the tournament, Captainship - If there was MOS that time, Surely Kapil would be my MOS), Binny & Madan lal who took 18 & 17 wickets respectively, Yashpal & Sandeep winning the Semi, Chika’s 38 Highest score in Final.