Matchday 8 kicks off tonight as ATK Mohun Bagan locks horns with Bengaluru FC in the battle of the equals.

Here is the points table after Gameweek 7! 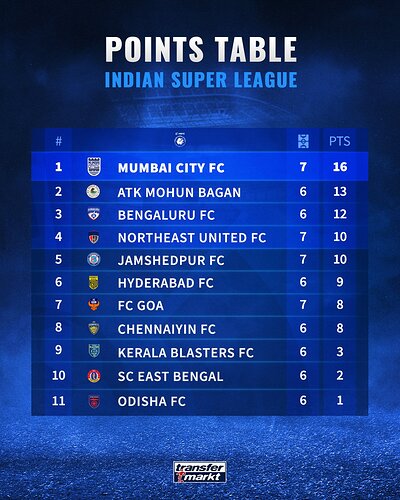 At 17 years 10 months and 3 days , East Bengal’s Haobam Tomba Singh became the youngest player ever to start in a #ISL game .

How did you think the young turk performed ? 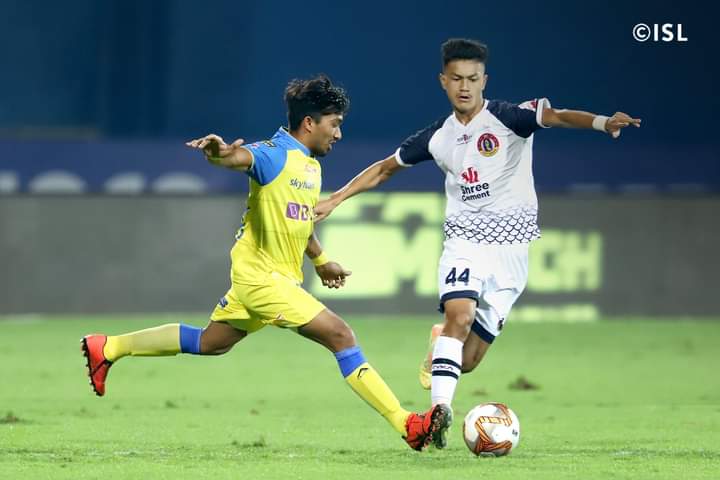 ATK Mohun Bagan will lock horns with Bengalaru FC on the eighth match week of the Indian Super League 2020-21. The match will be held at the Fatorda Stadium in Margao, Goa.

The Mariners were hit with a minor setback in their ISL campaign when they were defeated by Jamshedpur FC. However, Antonio Habas’ side has managed to stay on course and put their disappointment behind.

In their next two fixtures against Hyderabad FC and FC Goa, they managed to get four points, with a draw and a victory. Roy Krishna has been the leading light for the Mariners’ attack, with five goals in six matches this season.

Bengalaru FC head coach, Carles Cuadrat will hope that his side is able to carry on its positive start to the ISL 2020-21 season. The Blues have stayed unbeaten over the course of six matches so far, with three wins and as many draws.

After starting out with three draws in their first four matches, the Blues managed to hit their strides. They have won their last two encounters against Kerala Blasters FC and Odisha FC in convincing fashion.

The attackers, Sunil Chhetri and Cleiton Silva are in fine form and will aim to continue in the same vein. 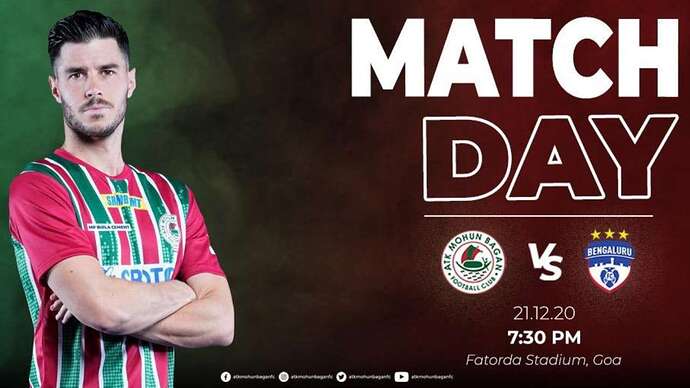 With 12 goal involvements in his last 22 games, will David Williams lead ATK Mohun Bagan to a win today? 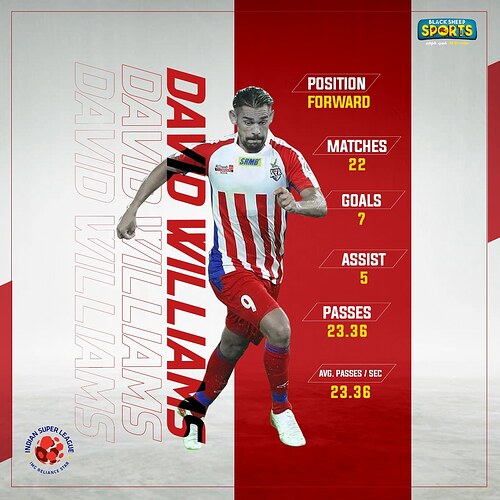 Before the clash of Titans today at Fatorda, let us check some statistics regarding the past meetings of the both teams. 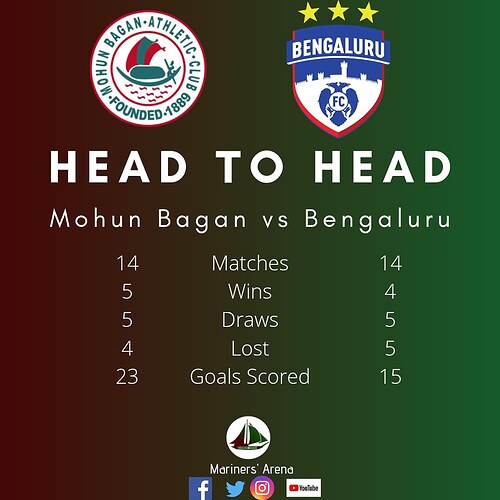 Will Mohun Bagan break ‘The Blues’ solid defence and end their undefeated streak? 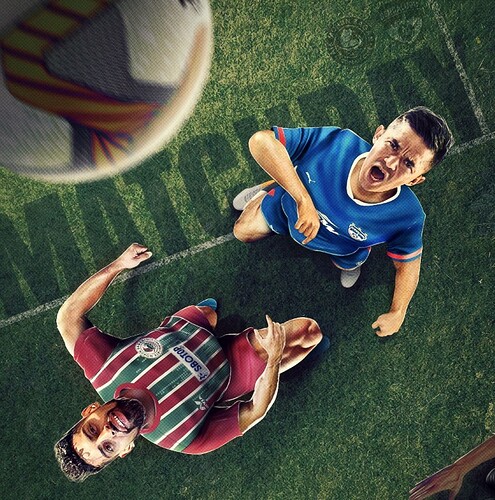 High voltage match is on the way. Expecting a ATKMB win. Chances of a draw game is also high.

As Habas always do the unexpected, but I personally feel that the formation of ATKMB will be 5-3-2 defensive and 4-3-3/ 3-5-2 attacking.

The match will be low scoring as per my expectations. I guess one goal will be the difference, Let’s hope for the better game of football.

“ATKMB were the champions for a reason. They know how to defend and how to be dangerous in their attacks. That’s what we have to try and avoid on Monday” 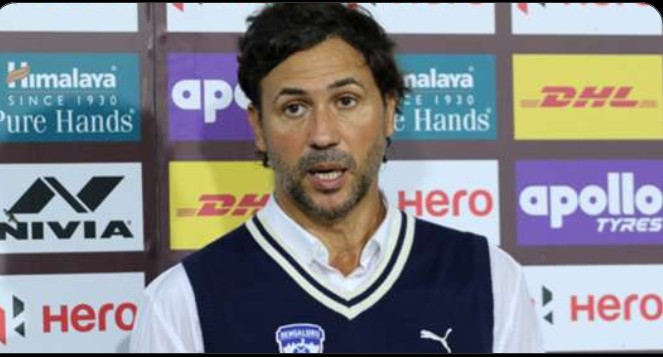 THE TEAM NEWS ARE IN.

who are you backing? 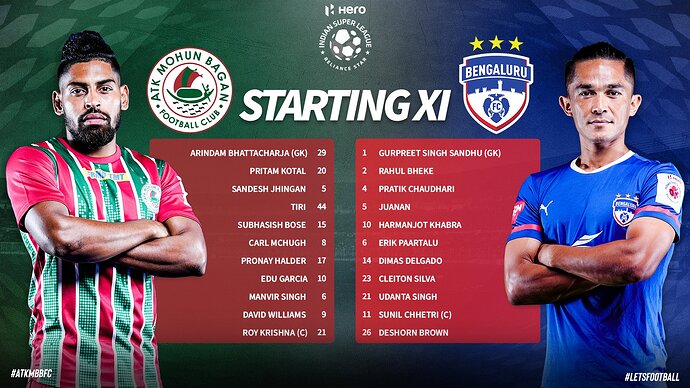 who are you backing?

David Williams has just scored his first goal of the ISL season to put ATK Mohun Bagan ahead.

He has made a habit of scoring against Bengaluru hasn’t he? 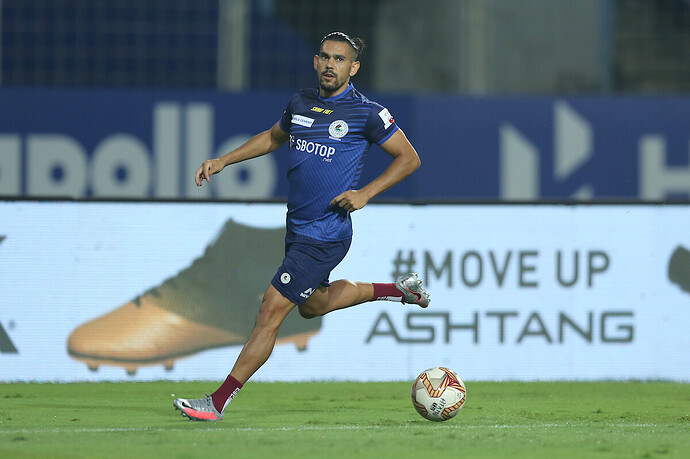 It is a game, where ATKMB have dominated so far and deservedly in the lead.

There is nothing much to write about BFC, who have been below par. The Blues need to find their mojo in the second half, else they are heading towards their first defeat of the season. 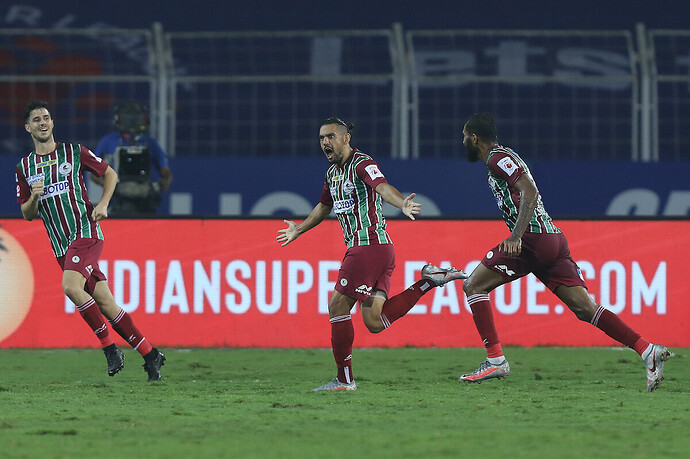 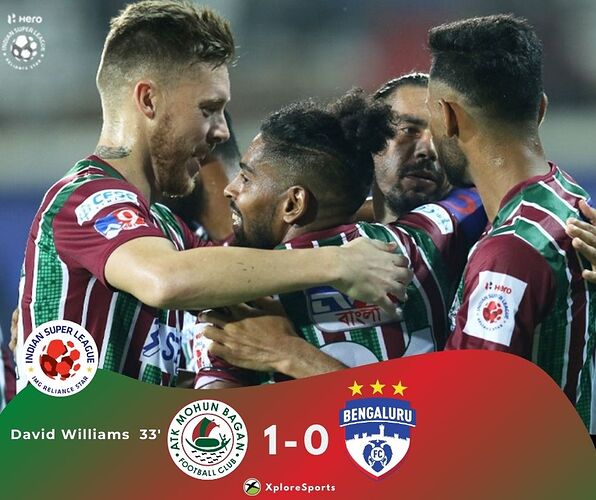 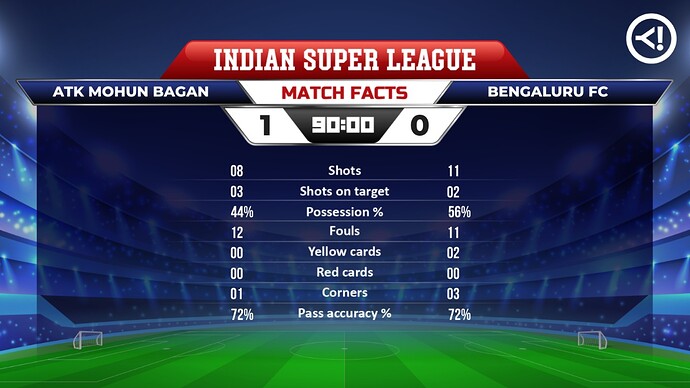 Hero of the match: David Williams of ATK Mohun Bagan for his stunning goal tonight. 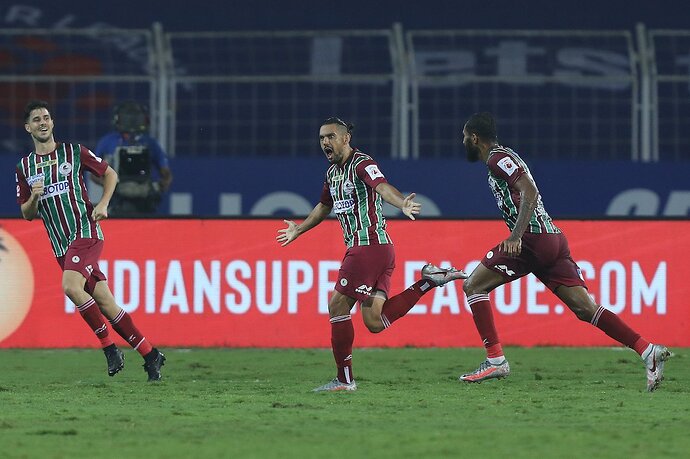 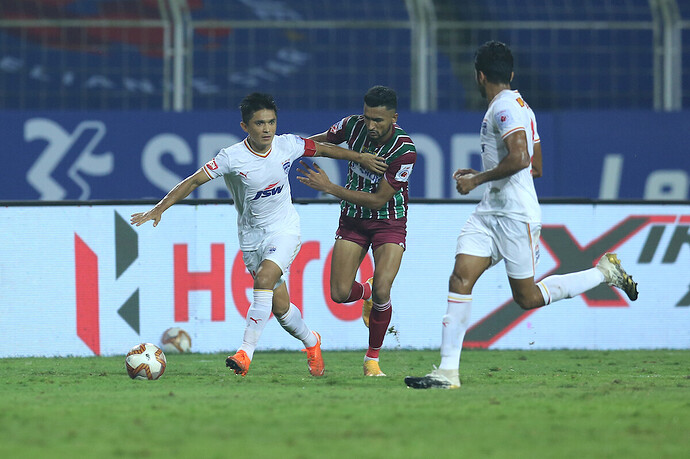 ATK Mohun Bagan FC have a passing accuracy of 67% in the current campaign of the Indian Super League, the worst amongst all teams. Imprecision. 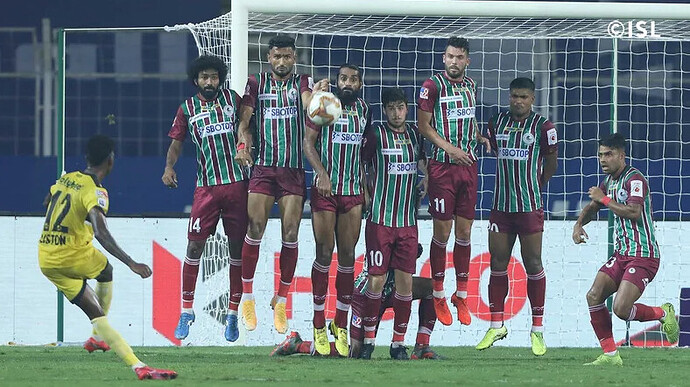 Here’s how the ISL table stacks up after tonight’s result at the Fatorda. 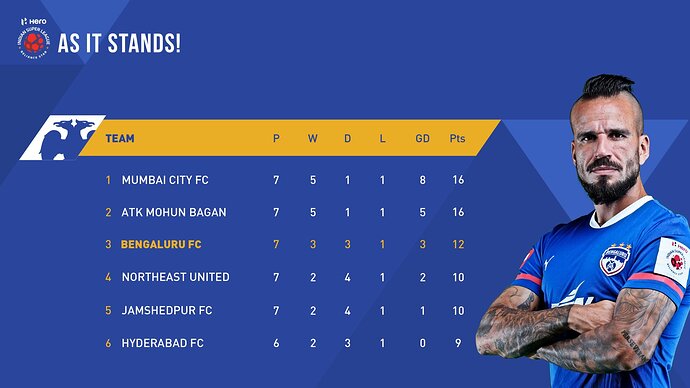 As I mentioned, always expect the unexpected from Habas. Formations were 5-3-2 defense and 4-3-3 attack as predicted. But but but, its not a defensive approach, it’s high pressing attacking football. Every player was good.

If you had picked Tiri, Williams and McHugh for your fantasy team you got it correct. Tiri is actually the best defender in ISL no doubt. Along side Sandesh was good as well. Manvir was impressive. Edu Garcia was moving like brilliant.

Although I predicted 1-0 in favour of ATKMB, and exactly the same has happened but it actually could have been more goal win.

From BFC point of view, Demus was good but constant attacking left them clueless. Partalu was off colour. Sunil has to play in the defensive third most of the time because of the constant press. Actually BFC was just trying to find the way to settle in the whole game. Suresh should start in this team. Pratik was sloppy , he actually could get one red card.

Simple game plan out played BFC today. I am really happy that all my predictions gone correct. So far ATKMB’s best performance. The team started picking up, expecting more in the upcoming game. Mark my words this ISL is going to be Devid Williams’s ISL if he keep himself fit.

Great display of the game of football .
Note: Attacking moves are in green arrow and defensive moves are in red arrow. 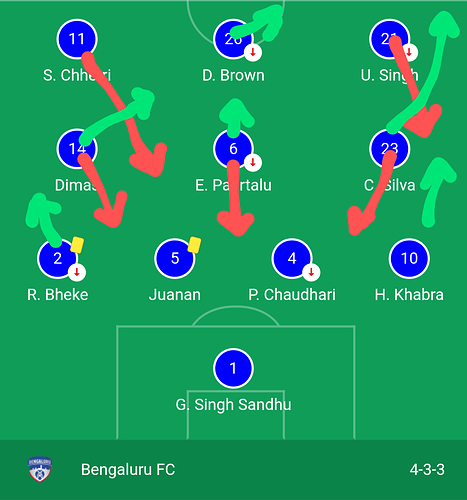 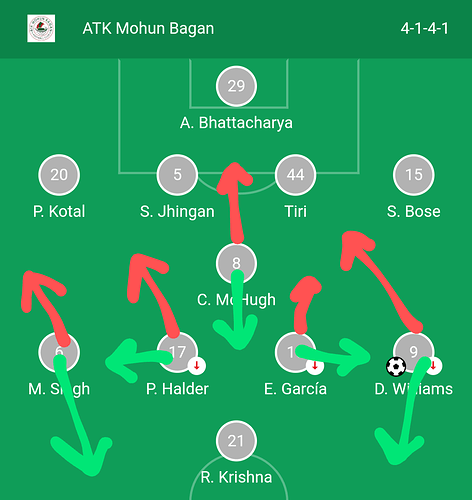 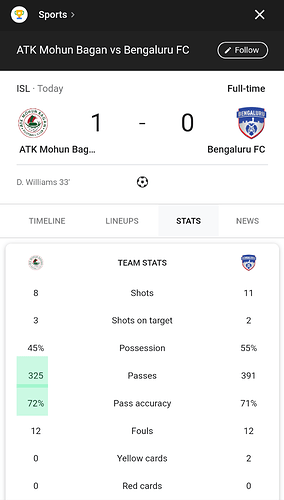