The Matchday 17 of the 2020-21 ISL season kicked off yesterday as MumbaiCity FC restores its six-point lead at the top of the ISL table by beating Kerala Blasters 2-1. 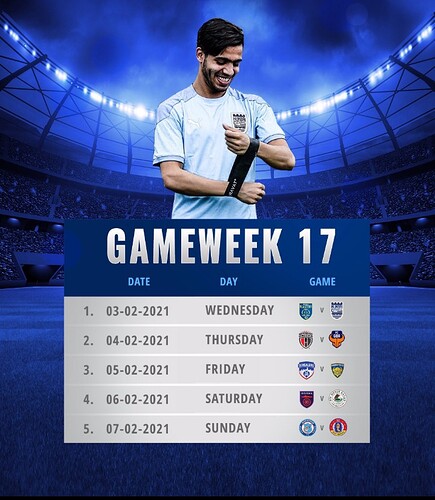 Plenty of exciting action in the ISL this Week! Join in the discussion and share your views on the best and worst matches and anything in between.

] SC East Bengal coach Fowler faces a minimum ban of five matches and 6 lakh fine for an alleged racist remark against referees after a match against FC Goa.

Fowler had allegedly said the refereeing was either “anti-English or anti-East Bengal”.

] AIFF disciplinary committee will allow Fowler to explain his version of the comments before making a final decision on whether to punish him or not. If he is given the five-match ban, the Englishman will not be present for East Bengal’s remaining games. 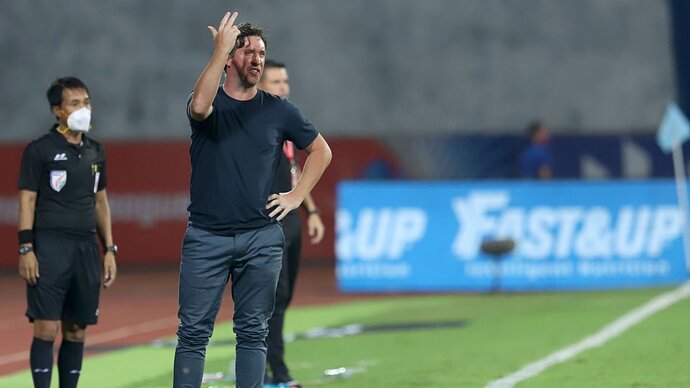 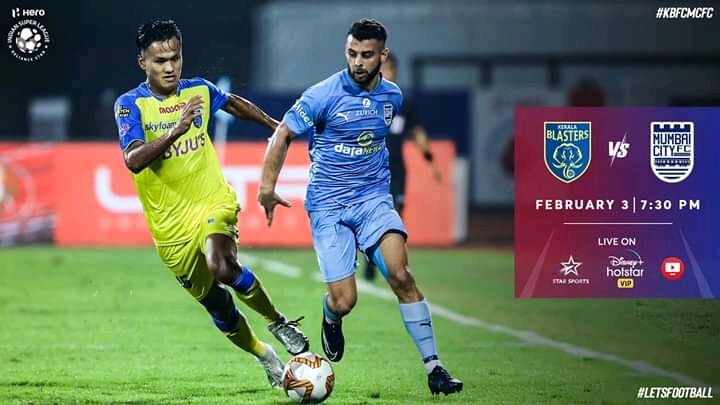 Kerala Blasters will face table-toppers Mumbai City FC in the Indian Super League (ISL) on Wednesday. The match will be played at the GMC Stadium in Bambolim, Goa.

Kerala Blasters FC will be expecting a tough match against Mumbai City FC. Kibu Vicuna’s side, who are currently ninth on the ISL table, have won only three matches this season.

In the last match against ATK Mohun Bagan, Kerala Blasters FC were leading with a two-goal margin. However, they embarassingly blew the lead and lost the game 3-2. Low on confidence, the Tuskers will hope for a better result against Mumbai City FC.

It won’t be an easy task though as Mumbai City have scored the most goals in the ISL this season. Constrastingly, Blasters have the most leaky defence in the present campaign. It will be a difficult task for Vicuna’s men to contain the free-flowing Mumbai City FC.

Mumbai City FC have looked a completely different side under Sergio Lobera this season. They are currently sitting atop the ISL table, three points clear of second-placed ATK Mohun Bagan. The Islanders recently set a new ISL record for the longest unbeaten run. However, their 12-match undefeated streak came to an end in their last outing against NorthEast United FC.

] SC East Bengal coach Fowler faces a minimum ban of five matches and 6 lakh fine for an alleged racist remark against referees after a match against FC Goa.

Hmmm… There we go again!

Referees and Coaches seem to be the highlight of this ISL season!

Do you think that will change today? 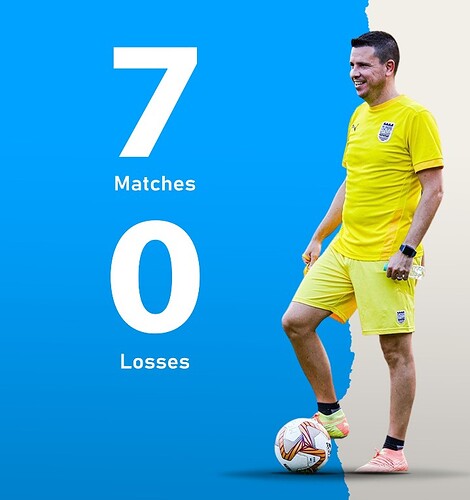 As we all know today’s favourite is MCFC.

But they are down by 1 goal why?

Hope that they could hold up to the lead today, being an ATKMB fan I just want that to happen. 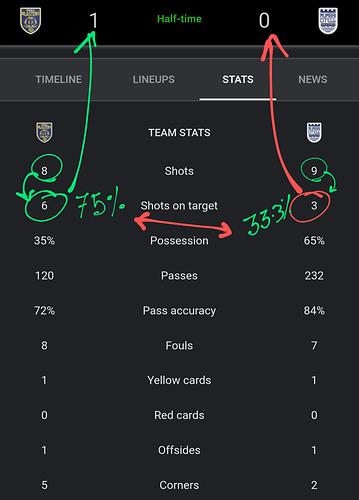 Again and again. KBFC completely scattered. MCFC got the goal because of the gift given by the KBFC defense.

Bipin stretched the game, looked better. But bumos and le fondrey was off.

KBFC support staffs submitted kone’s name for substitution with Garry Hooper mistakenly. They wanted to substitute Juande. If this is the condition of the support staff then nothing to say. 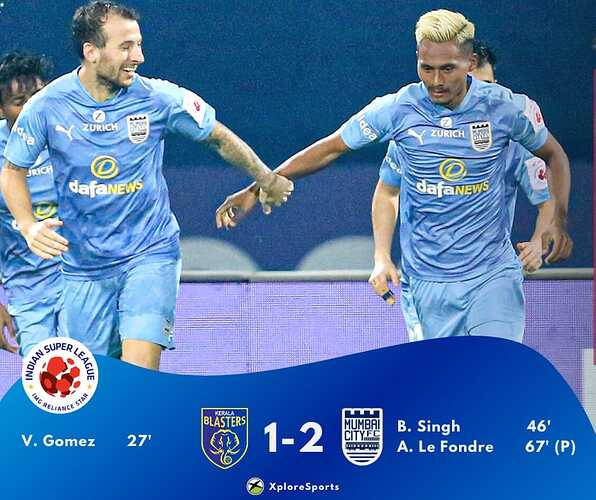 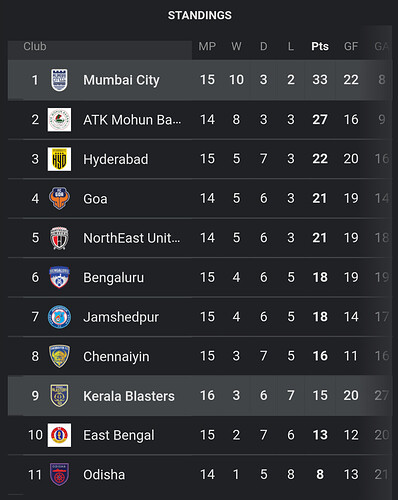 ] AIFF disciplinary committee will allow Fowler to explain his version of the comments before making a final decision on whether to punish him or not. If he is given the five-match ban, the Englishman will not be present for East Bengal’s remaining games.

Fowler was in the dock for stating that he was “not sure whether the Referees have an Anti-English thing or Anti East Bengal thing” in the ISL being conducted in Goa.
Fowler insisted there was nothing racist about his outburst.

“The Committee held such utterances and publications are gross inconceivable derogatory and contemptuous aspersions apart from blatant malice on the part of Mr. Fowler and tends to offend the dignity, reputation and image of the Referees in India.”

"It is a very important win for us after a long time of not winning. After the last game, the reaction of the team, I am very proud of my players, they showed good character. I am very happy.

"I think we made enough chances to get a good result. We played very well against the best team in the competition. Another penalty, Costa saying it wasn’t penalty. Things happen against us.

"We work psychologically with the team but the trends in football is important. When you are getting good results even when you aren’t playing well and when you lose even when playing well, it’s tough.

"Congratulations to Mumbai City FC for winning the game.

“I am disappointed because football has been cruel with us. I think we deserve to have more points. We are training to be better, we have to improve in the defensive phase because we are conceding a lot. But we are creating so many chances.”

Mumbai City FC 's captain Amrinder Singh is the Hero of the Match!

Cy Goddard picks up the DHL Winning Pass of the Match!

For providing the pass for Mumbai City FC’s equaliser.

Mumbai City FC once again proved their mettle by coming from behind to beat Kerala Blasters FC and register their 10th win of Hero ISL​ 2020-21. 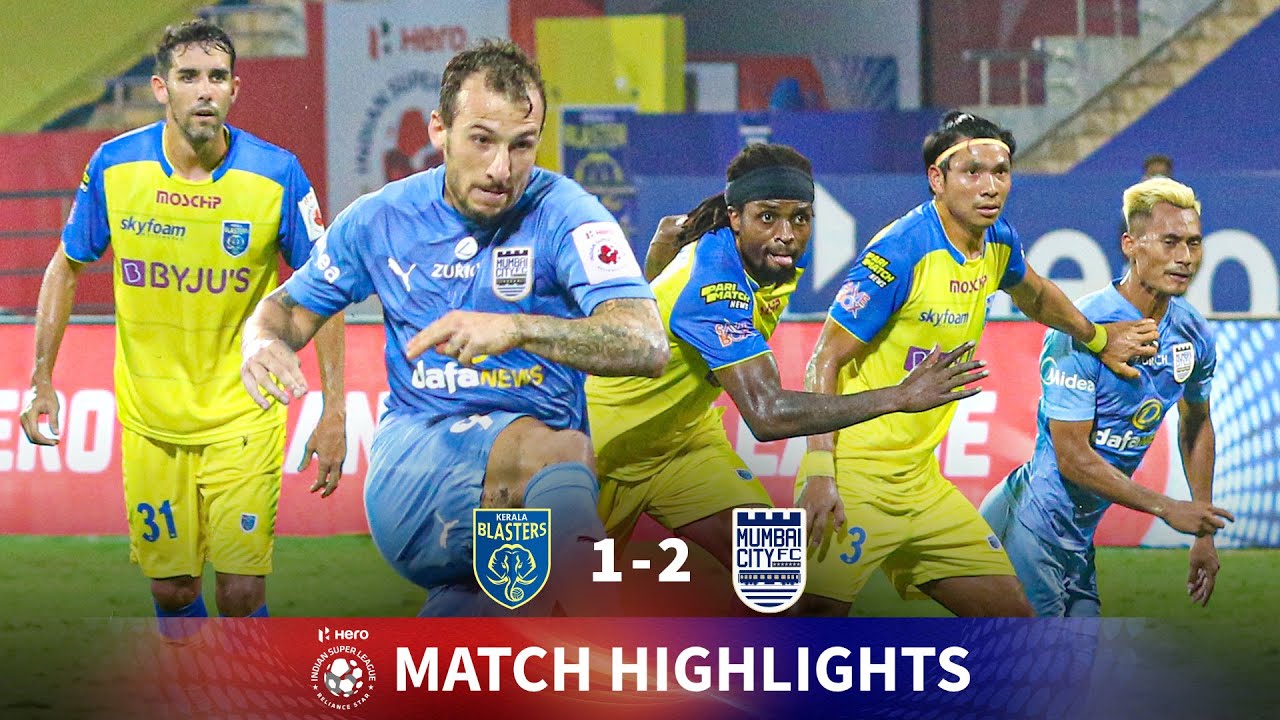 Mumbai City FC 's captain Amrinder Singh is the Hero of the Match!

Cy Goddard picks up the DHL Winning Pass of the Match!

For providing the pass for Mumbai City FC’s equaliser. 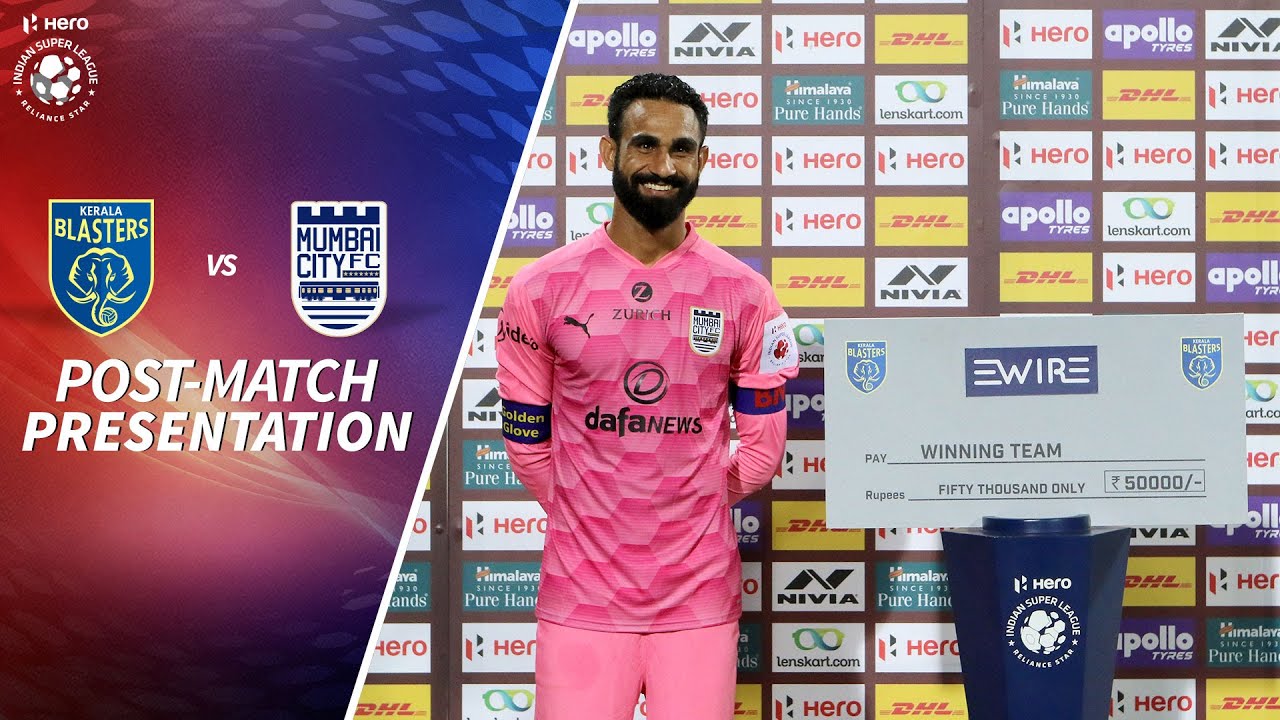 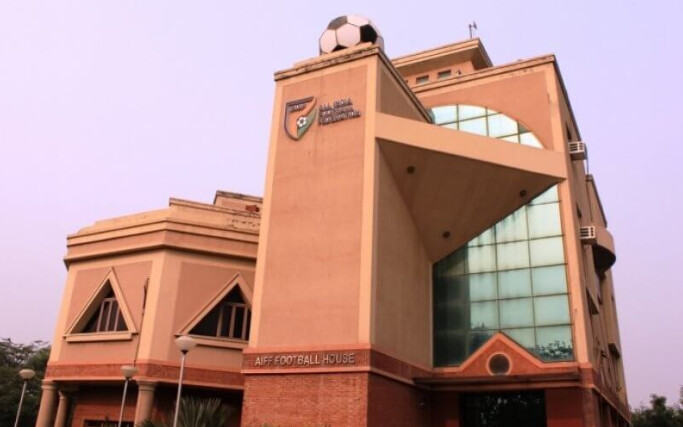 The All India Football Federation (AIFF) Disciplinary Committee has sanctioned SC East Bengal Head Coach Mr Robbie Fowler for breaching Article 50 (misconduct against match officials) of the AIFF Disciplinary Code. He has been suspended for 4 matches and fined Rs 5 lakh. This punitive action is specifically in regard to Mr Fowler’s criticism of on-field refereeing decisions in matches of the Hero Indian Super League 2020-21 season involving SC East Bengal.

Article 50.4 of the AIFF Disciplinary Code provides that fine and/or match suspension, as may be deemed suitable by the Disciplinary Committee, may be imposed for any person engaging in public criticism or making any adverse comment (such as about the integrity of a person) in media, press conferences etc. anytime against a Match Official.

The adverse remarks have questioned and cast aspersions on the integrity and honesty of the Match Officials who have supervised the matches with the best of their abilities with sincerity and maintaining neutrality. Moreover, anyone making any criticism through public media must be extremely cautious to ensure that under the garb of criticism and remarks in no way defame someone either directly or by innuendos.

This is not unprecedented in the Hero ISL. In the 2017-18 season, Mr Ranko Popovic, then FC Pune City Head Coach, was meted out the same punishment for his outburst against Match Officials. Even last season, Mr Antonio Lopez Habas (then ATK FC Head Coach) and Mr Eelco Schattorie (then Kerala Blasters FC Head Coach) were also handed similar punishments by the AIFF.

However, the Committee, taking note of certain media reports clarified that none of Mr Fowler’s comments was racist ones.

A captain’s performance from Amrinder Singh

Mumbai City FC’s Sergio Lobera answers questions of the media after his side came back to defeat the Kerala Blasters 2-1.

Kerala Blasters’ Kibu Vicuna answers questions of the media after his side fell to a resilient Mumbai City FC side. 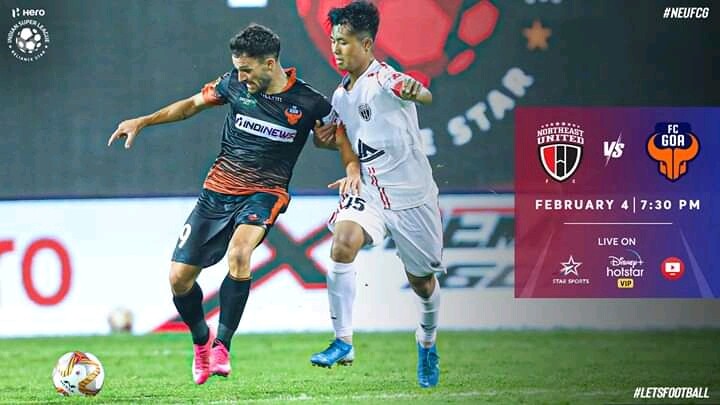 With their sights on the third place in the table, NorthEast United FC and FC Goa lock horns in a big[ Indian Super League (ISL) clash on Thursday. The game will be played at the Tilak Maidan in Vasco.

The rejuvenated NorthEast United FC won their last three ISL fixtures. They got the better of Jamshedpur FC, ATK Mohun Bagan FC, and Mumbai City FC. The Highlanders are 5th in the standings with 21 points. Khalid Jamil’s unorthodox approach to games has made it difficult for teams to understand the tactical side of NorthEast United FC.

FC Goa are on a seven-match unbeaten run, that includes three consecutive draws. The Gaurs have been consistent throughout the season and find themselves at fourth in the standings. Juan Ferrando’s side has made good use of the quality in the squad, and will pose a tough test for the Highlanders. 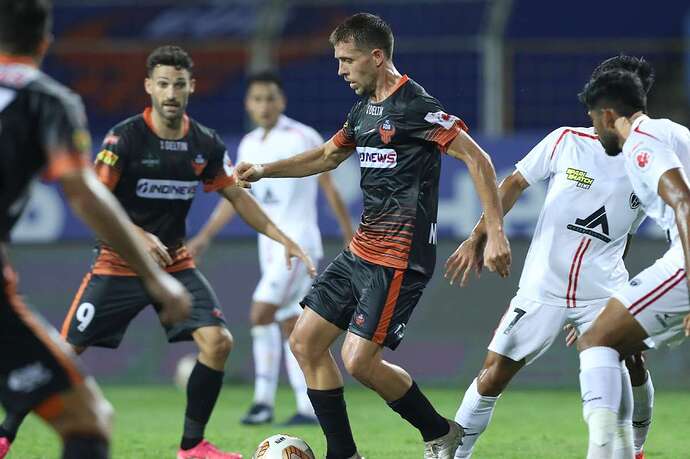 NorthEast United FC and FC Goa have played each other on 13 occasions in the ISL. The Highlanders have managed to win twice over FC Goa. The Gaurs have notched up five wins while six games ended in draws.

The two teams played out a 1-1 draw when they met earlier in the current ISL season.