In this thread, we will be covering 5 fixtures of Game Week 16 from 30th of January to 2nd February 2021

Inching closer to the business end

Here are the standings after Round 15 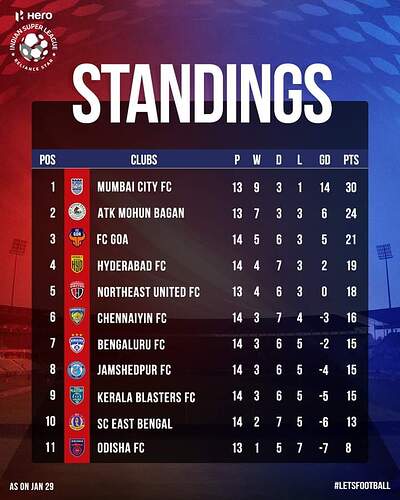 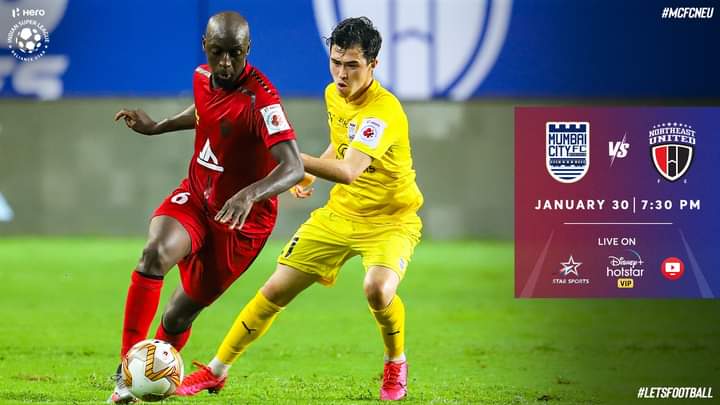 Mumbai City FC will be eager to get the better of NorthEast United FC when the two sides clash at the GMC Stadium in Bambolim on Saturday. NorthEast is the only side to beat Mumbai City this campaign having edged the Islanders 1-0 in both sides’ season opener. However, beating Mumbai City for a second time won’t be easy, especially when you consider how the Islanders have gone on since that defeat.

Unbeaten in 12 games ever since the defeat to NorthEast, Mumbai City, with a win or draw on Saturday, can become the first team in league history to have gone unbeaten for 13 successive games. Defensively sound and sharp in attack, the Islanders have conceded five times – the least by a team in the league – and found the back of the net 19 times over the course of the campaign.

Sergio Lobera’s men tend to score most of their goals in the first half having netted 12 of their 19 goals in the opening period of contests. They will be hoping for another strong start against the Highlanders as they look to make amends for their only loss of the season. A well-drilled outfit, Mumbai City are very dangerous from set-pieces and have scored 12 times from such situations – the most by any side in the league. Their defence is also difficult to breach as their eight clean sheets so far suggest.

NorthEast, on the other hand, will be confident in their ability to go toe-to-toe with Mumbai City after a run of good results. They head into the game on the back of a three-match unbeaten run that’s seen them win both their previous two games. 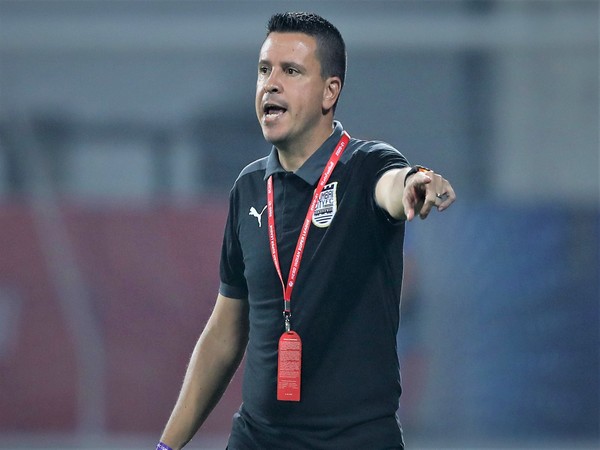 “I am not worried about the first match. They have improved a lot with the new coach [interim head coach Khalid Jamil] in the last two games. They are playing very good attacking football and very comfortable keeping possession of the ball. For us it’s going to be a different game from the first leg but we have obviously improved from the first match of the season. It’s going to be a very good game and it’s not easy now to play against NorthEast,” Lobera said ahead of the game.

"First of all, I would like to give credit to the players for their hard work and good performance in the last two games. Hopefully, we will continue with the same spirit in tomorrow’s match. Mumbai City, unbeaten 12 games, are a good team but we must believe that we can beat them tomorrow. We just have to be disciplined in our attacking and defending principles and be confident. We have beaten them once but tomorrow is a new game and a fresh challenge for us. I’m sure that the players will be putting in their best efforts to get three points tomorrow,” NorthEast assistant coach Alison Kharsyntiew said ahead of the game.

Edu Bedia is the first player to attempt 1,000 passes in this campaign of the Hero ISL. 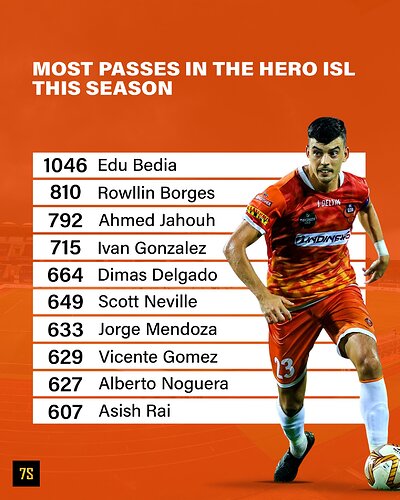 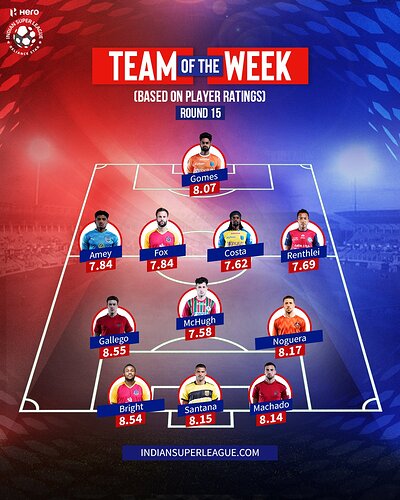 That’s why this is Football. Exciting game.

The Sleeping Giant (killer) is awaken. This team is beating all like beasts. Now the question is why?

My answer is the coach is indian he is picking the best indian players in the squad unlike the other overseas coaches.

Nim dorji - not that good with defence but comes in overlaps
Lakra- good defending. Neutralising Jacky.
Camara and apuiah more than briliant.
Suhair not that good with the ball but off the ball he is disturbing the defence like hell.
Galego, Machado and deshorn pressing.

Typical 4-2-3-1 attacking. Keeping things simple and focusing on what you have got. Brilliant managing Mr. Jamil.

In case of MCFC , They are looking like they are facing out of syllabus question. They are one outstanding side looking forward for some stunning football in the 2nd half.

In case of MCFC , They are looking like they are facing out of syllabus question.

When complacency kicks in it affects the performance. I actually think these realizations in between are good for the team and will help them stay on top of the game in the long run.

Having said this, rooting for the underdogs to climb up the chart and fiercely contest for the championship trophy.

MCFC returned one but today is not their day. Defensively NEUFC was on their mark. A.Jahouh was lucky to not get the red card. He is a marvelous player but he got a problem with keeping his nerve cool.

Sarthak Golui my school junior. I played with him in childhood. Today when I see him replacing M. Fall., It was a proud moment.

However these results will keep this league more competitive. 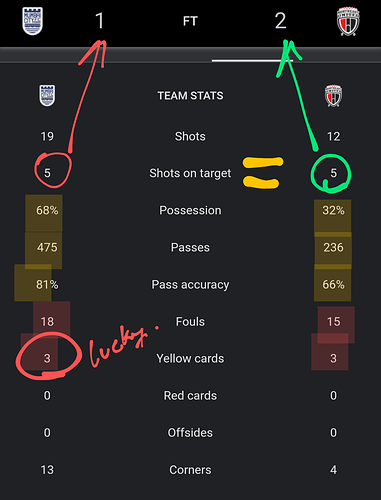 2020-21: Beat the Kolkata giants and Mumbai twice. Will the perennial underdog story of North East United have a better ending? 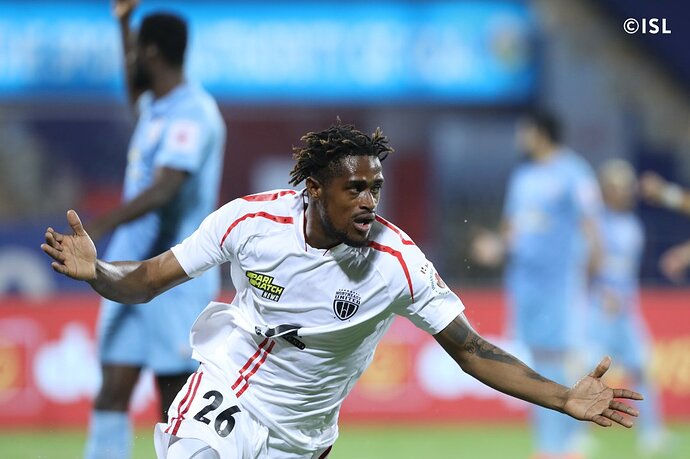 NorthEast United FC have completed a league double over Mumbai City FC. A first-half brace from Deshorn Brown and some resilient defending helped the Highlanders beat the league leaders 2-1. With this win, they break into the top four and are level on points with third-placed FC Goa. This was also their third win on the trot.

As for Mumbai, after being outplayed in the first quarter of the game, they found their way back after the first water break. They did find one goal back, courtesy Adam Le Fondre, but it was too little too late for the Islanders.

Sadly for Mumbai, this defeat means they won’t be able to better FC Goa’s record of 12 games unbeaten. Both these teams are tied on 12 games. 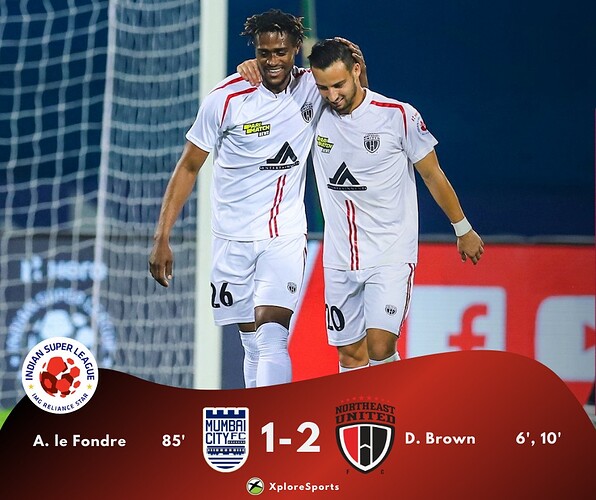 Deshorn Brown takes home the Hero of the Match award

For netting the brace that powered NorthEast United FF to victory 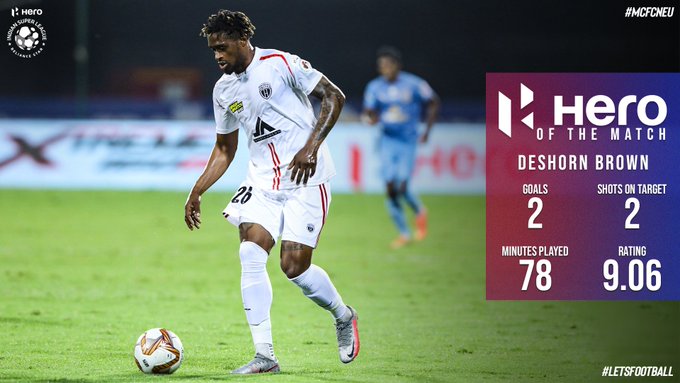 Nim Dorjee Tamang gets the DHL Winning Pass of the Match!

For his inch-perfect cross for the opening goal. 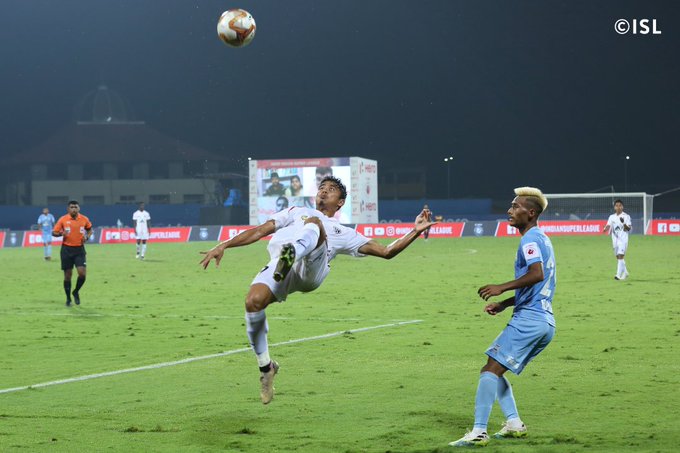 "The start wasn’t good. We conceded two goals in 10 minutes and it was difficult for us to be in this situation because after that we didn’t play well. Our balance in defense was not good. When we lost ball there was lot of spaces between lines and they have players who exploited this.

They played better than us today. I congratulate them. I need to analyse my team’s game and try to improve our mistakes from today. We created chances in the end today, but playing we were playing impulsively and not as per our style. Today they (NEUFC) deserve the win and I need to congratulate them." 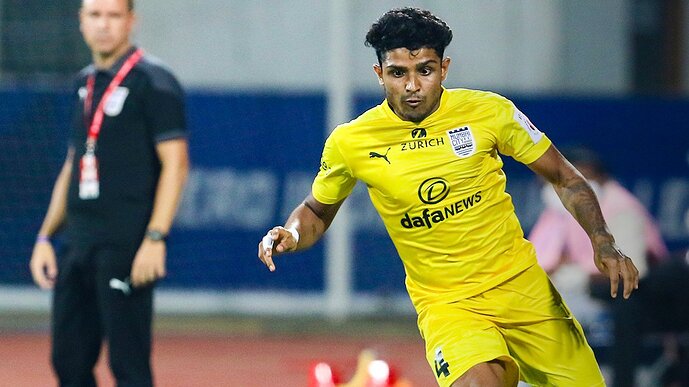 NorthEast United FC claimed their first double over Mumbai City FC with stunning 2-1 win in Bambolim. The Highlanders wasted little time in striking an early blow as Deshorn Brown netted a brace within the first 10 minutes!

It took until the 85th minute for the Islanders to score a goal and it came through substitute Adam Le Fondre. However, the decisive goal would elude them as NEUFC hung on for a third straight win, preventing the Islanders from achieving an unbeaten record of 13 matches! 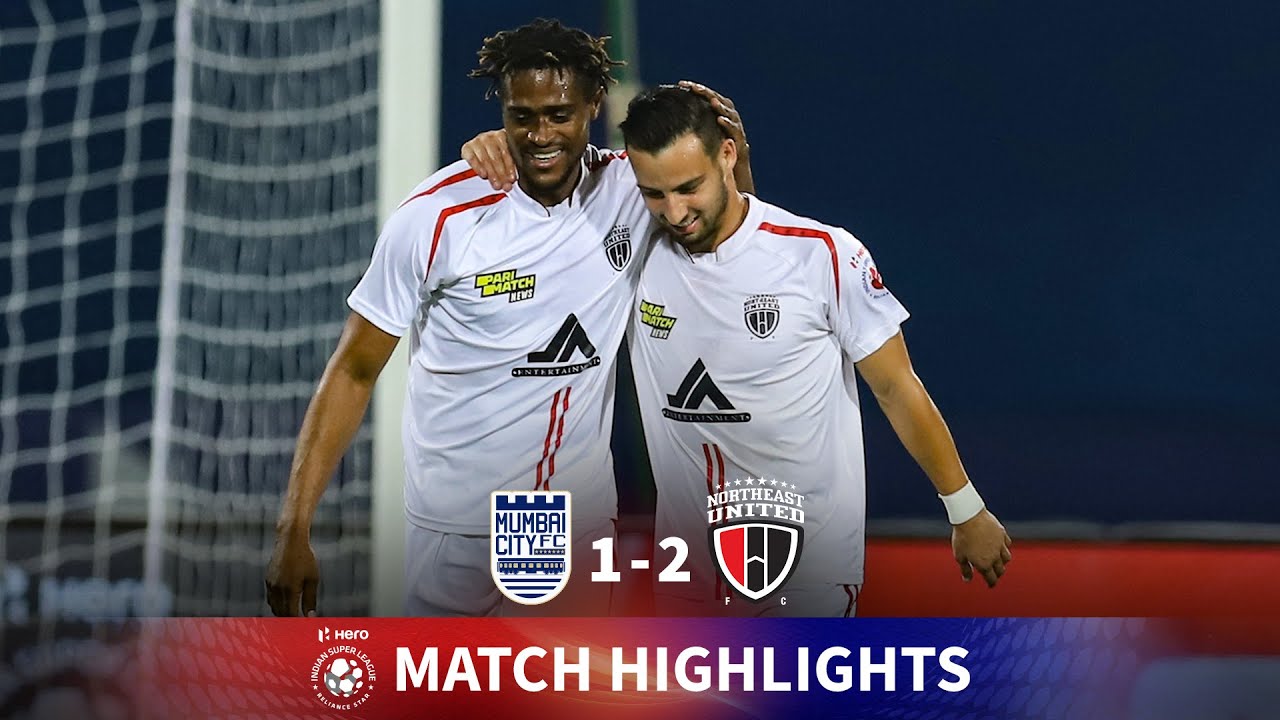 Deshorn Brown takes home the Hero of the Match award

For netting the brace that powered NorthEast United FF to victory

Nim Dorjee Tamang gets the DHL Winning Pass of the Match!

For his inch-perfect cross for the opening goal. 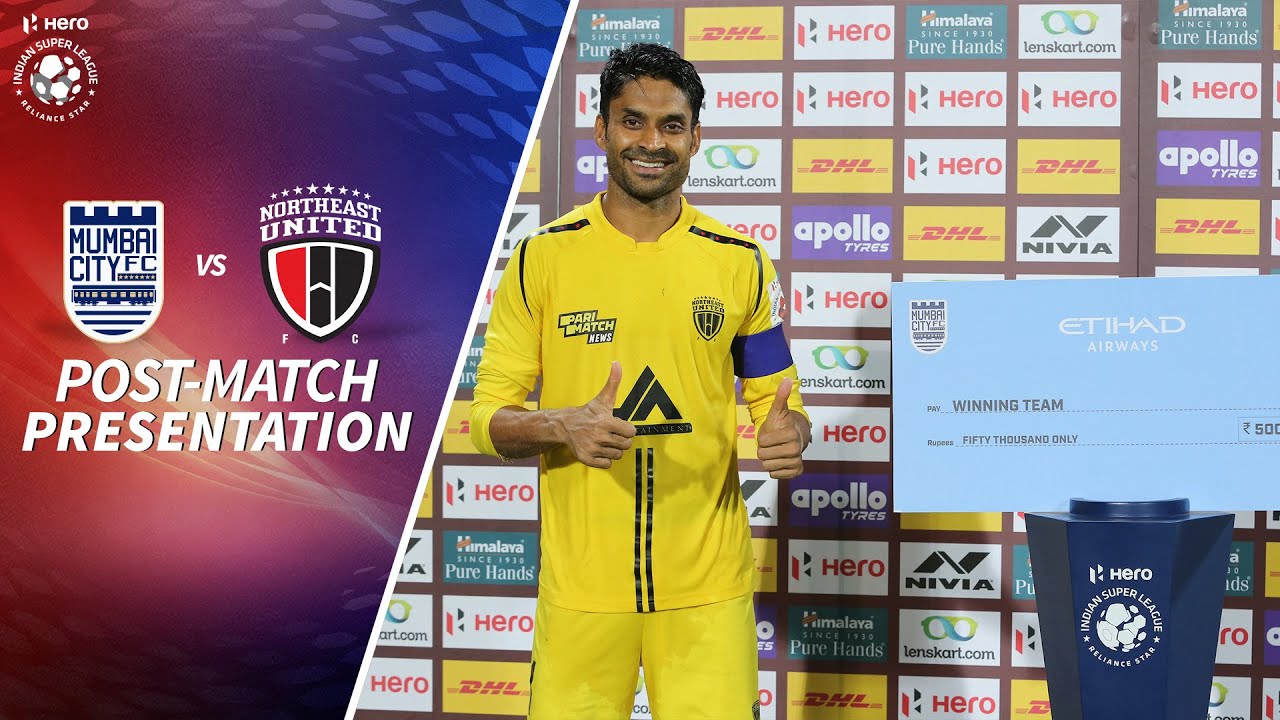 Joao Victor plays a slick pass and Sandaza calmly slots in the finish to put Hyderabad FC into the lead. 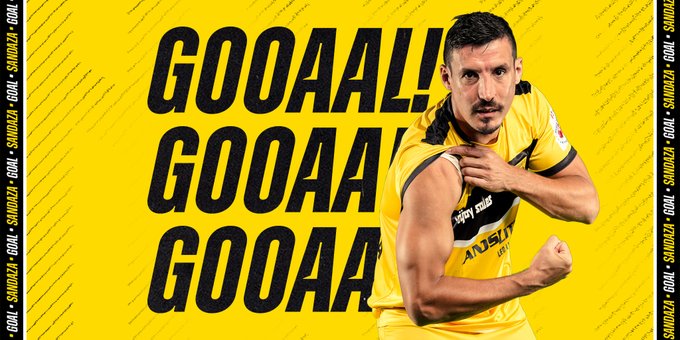 ATK Mohun Bagan will have a chance to cut Mumbai City’s lead at the top to three points when it takes on Kerala Blasters in the ISL 2020-21 2nd match at the Fatorda Stadium tonight.

Antonio Habas’ side has witnessed a dip in form, notching just two wins in its last five games. The Mariners lost to NorthEast United in their previous encounter and will be eager to get points in the bag when they take on Kerala Blasters, which is unbeaten in five games.

Having roped in Marcelinho on loan from Odisha FC, Habas hopes his side’s attack can step up.

Kibu Vicuna’s men have scored seven goals in their last five games and are still in contention for a top-four berth, trailing fourth-placed NorthEast United by six points. ATK Mohun Bagan won 1-0 the last time the two sides clashed on the opening day of ISL 2020-21. 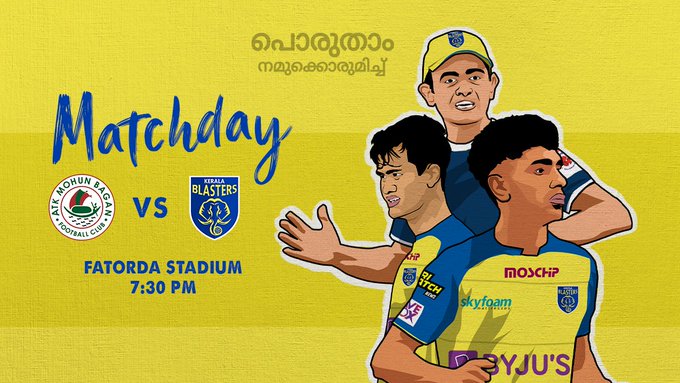 Amrinder - The best goalkeeper in India 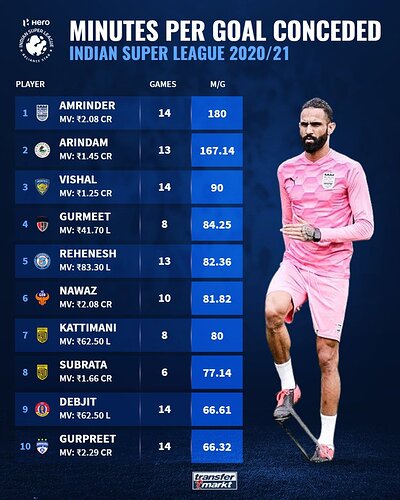