A perfect 10 from Mourtada Fall while Akash Mishra retains his place!

Here’s your Round 14 Team of the Week 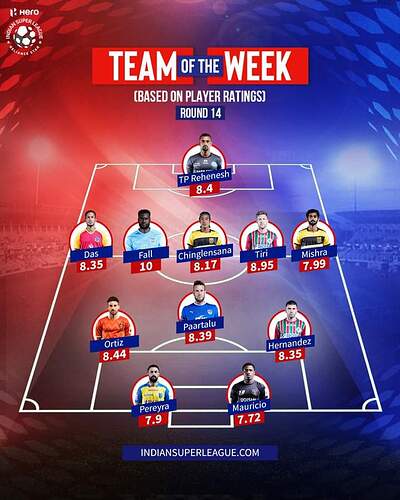 League Standing after Round 14 of games… 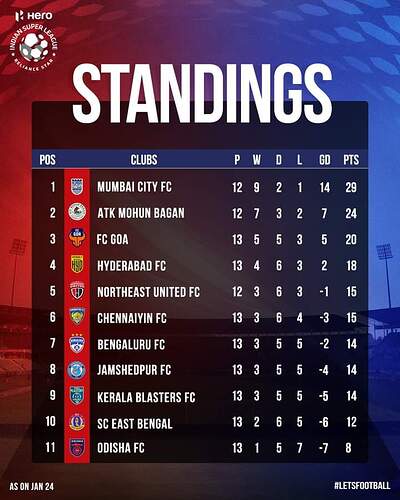 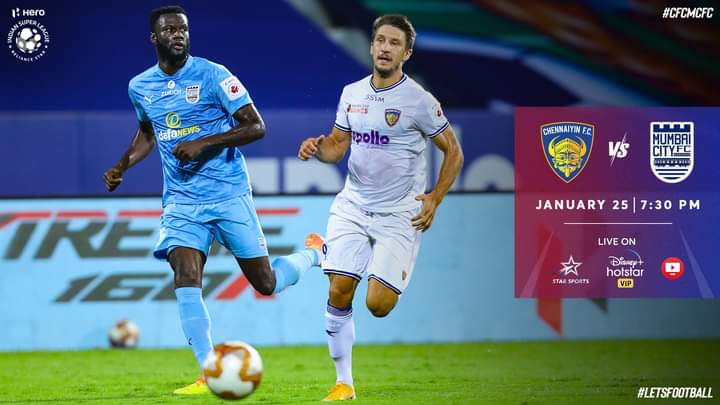 Mumbai City FC will be looking to extend their unbeaten run in Hero Indian Super League (Hero ISL) 2020-21 to 12 games when they face Chennaiyin FC at the GMC Stadium in Bambolim on Monday. The Islanders find themselves sitting comfortable at the top of the league and will be aiming to do the double over the Marina Machans having beaten them 2-1 earlier in the campaign.

The head-to-head between the teams though suggests that we could be in for a close contest. The two sides have squared off 13 times with Chennaiyin winning six times and Mumbai City emerging triumphant on five occasions.

However, Sergio Lobera’s men will back themselves to get the job done against a Chennaiyin outfit that’s struggled to find the back of the net this season. Unbeaten in their last 11 games with nine wins during that incredible run, a victory or draw will see the Islanders equal FC Goa’s record unbeaten streak of 12 games in the Hero ISL.

“We are happy with our position on the table and our results but it’s always possible to improve. For example, the last game [vs SC East Bengal], especially in the second half. It’s very important for us not to think about the past and we need to know that the most important game for us is the next game,” said Lobera ahead of the game.

"It’s not nice to lose a game and especially in the last minute. Also, in the last 10-15 minutes, they [ATK Mohun Bagan] were dominating the game. The spirit of the players at this moment is very down but we have to fight back against Mumbai City which will also be a difficult game,” Laszlo said ahead of the game. 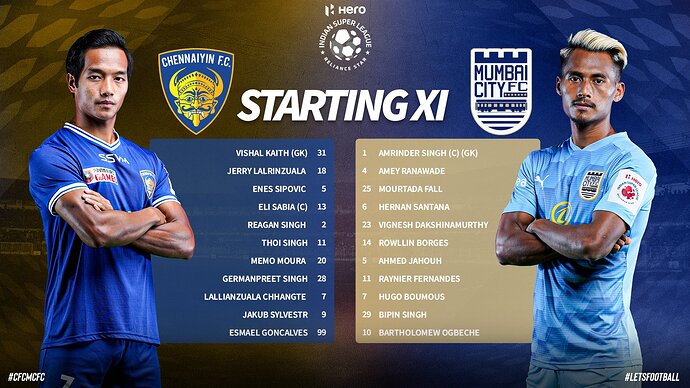 Ogbeche’s header the difference between the two sides at the break. 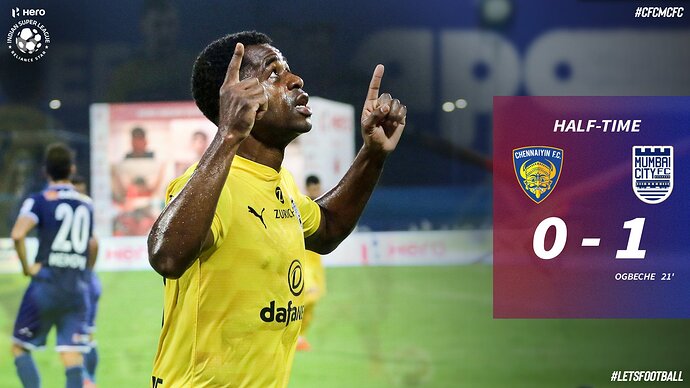 Mumbai City FC midfielder Hugo Boumous has the best differential between expected assists (2.64) and assists (six) at this stage of the ISL 7 season (+3.36). 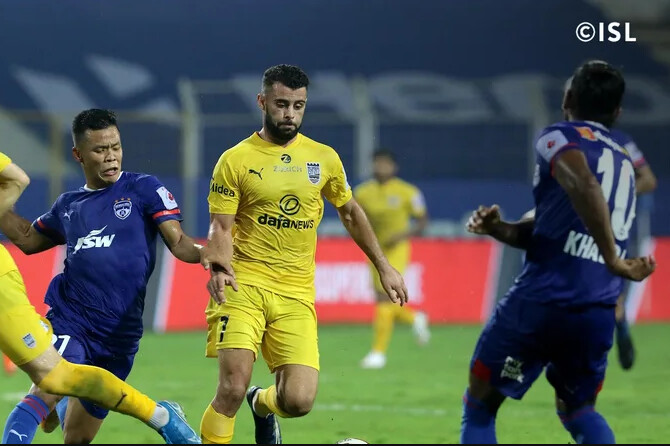 5 of the season for Bartholomew Ogbeche 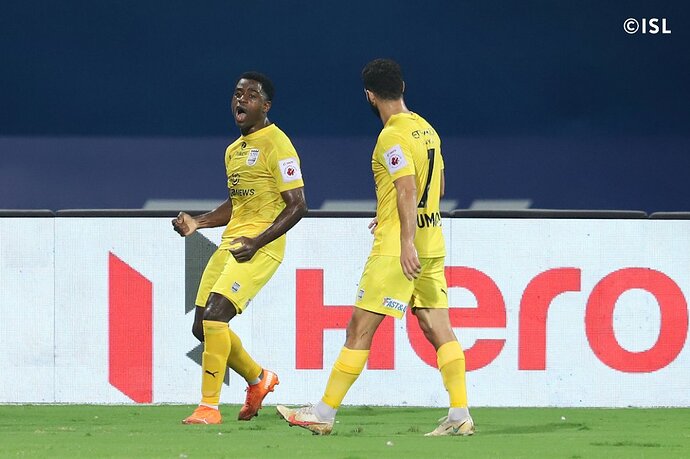 Can Chennaiyin FC break down their rock-solid defence in the upcoming 45 minutes? 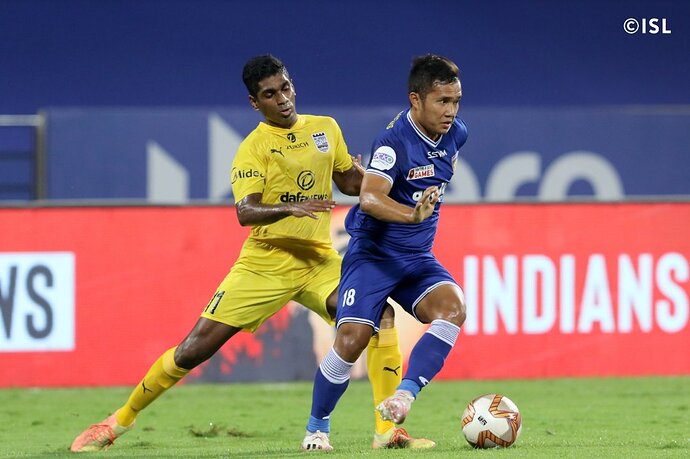 Mumbai City FC’s unbeaten run in ISL 2020-21 remains intact as it draws 1-1 with Chennaiyin FC. Ogbeche put the Islanders ahead in the 21st minute with a thumping header, while Chennaiyin drew level when Isma struck from the spot in the 76th minute. 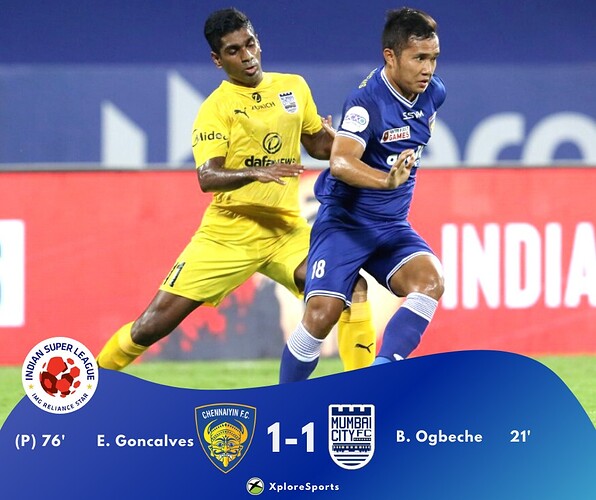 Chennaiyin FC hold Mumbai City FC to a 1-1 draw at the GMC Stadium in Bambolim on Monday.

CFC began the match on an attacking note but Mumbai City FC then controlled most of the possession creating plenty of chances. Bartholomew Ogbeche (21’) broke the deadlock for the Islanders in the first-half as they continued to impose thread on their opponents. Chennaiyin FC, however, returned with plenty of intent in the second-half as Isma (76’) scored from the spot to put the game on level terms. Chennaiyin FC was awarded the penalty, courtesy of a poor challenge from Ahmed Jahouh, inside the box.

By the virtue of the result, Mumbai City FC remain at the top of table while Chennaiyin FC are at the fifth spot.

Bipin Singh is the winner of the DHL Winning Pass of the Match for assisting Bartholomew Ogbeche’s goal. 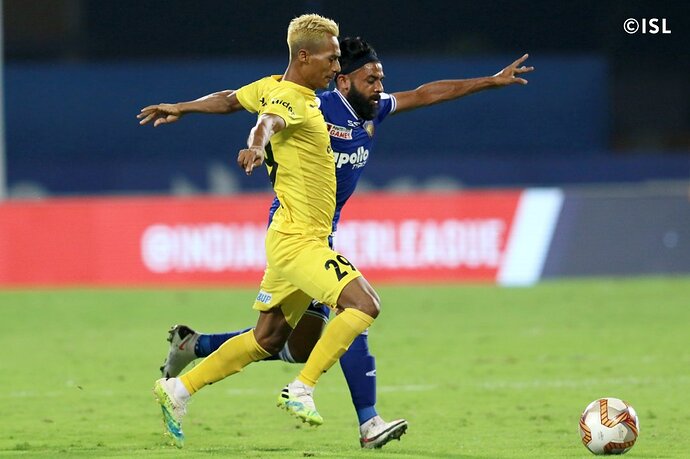 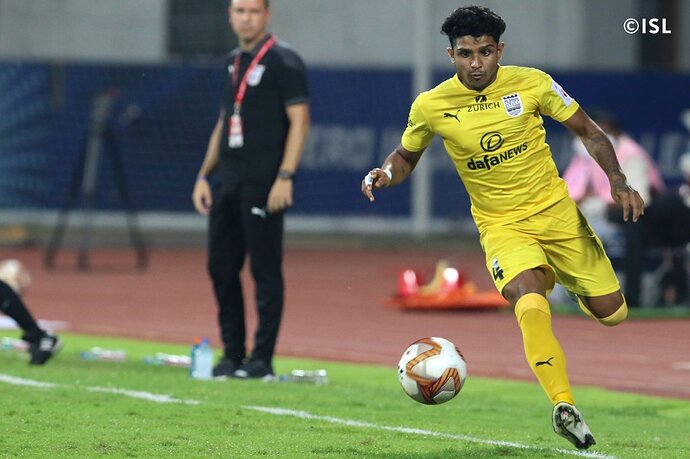 Chennaiyin FC and Mumbai City FC fought out a 1-1 draw in tonight’s HeroISL contest. Both teams came out aggressive and looked to strike early. A typical Mumbai City FC build-up play allowed the Islanders to take the lead, courtesy of a Bartholomew Ogbeche header. Chennaiyin FC were able to claw their way back as they earned a penalty off a mishap from Ahmed Jahouh. Esmael Goncalves smashed home the spot-kick and put Csaba Laszlo’s side back in the game.

As both teams searched for the winner, the defences were up to the task and ensured no more goals ensued. With the result, Sergio Lobera’s side tied the record for most consecutive games unbeaten with a shot at history in their next outing. 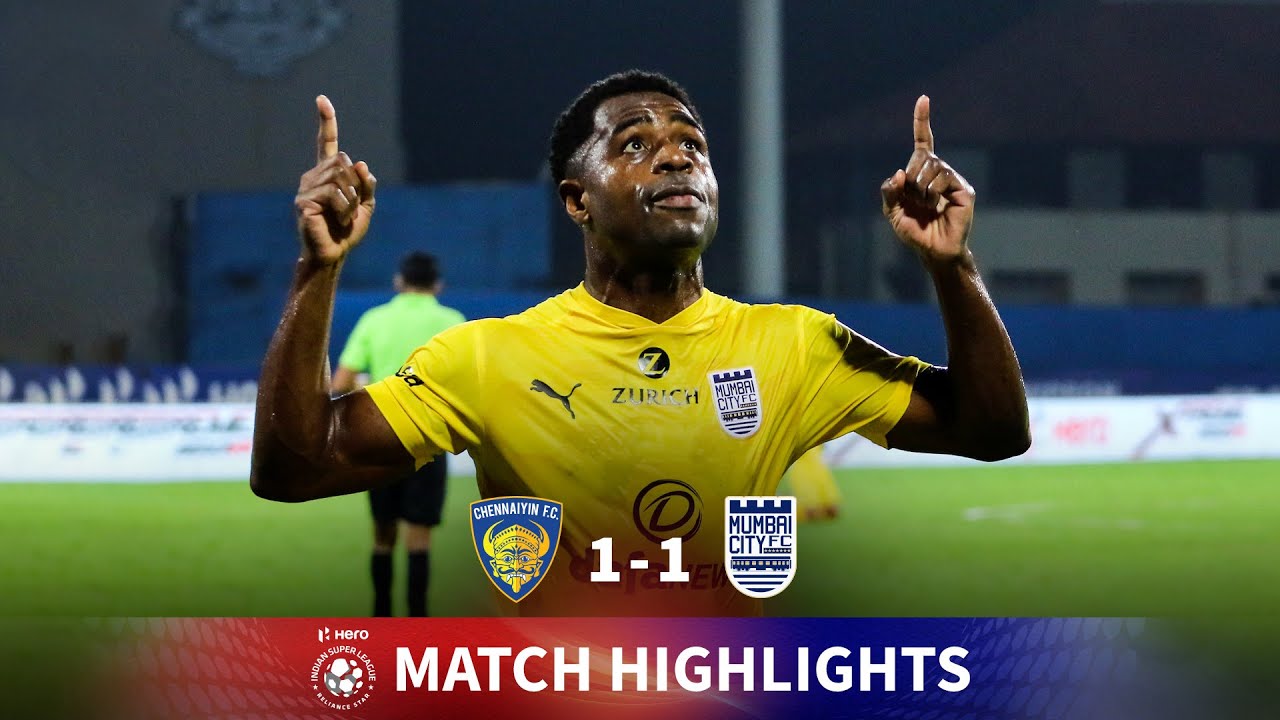 Bipin Singh is the winner of the DHL Winning Pass of the Match for assisting Bartholomew Ogbeche’s goal. 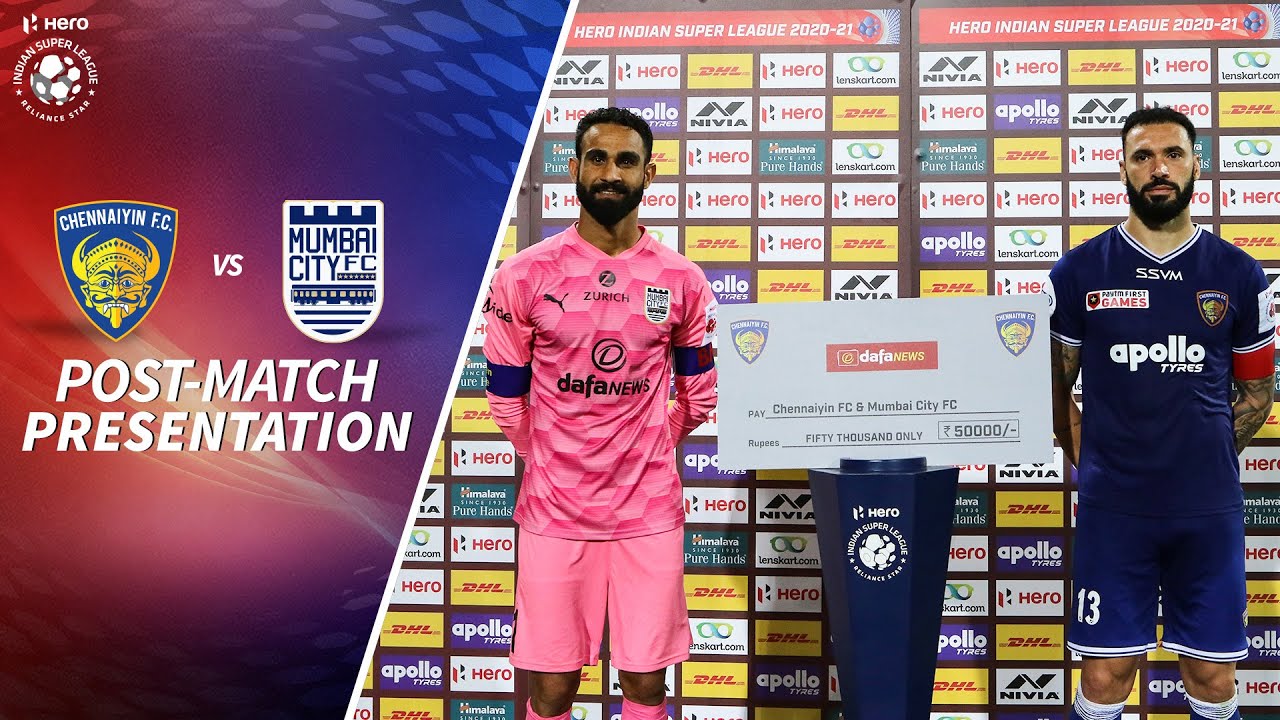 By avoiding defeat against Chennaiyin FC, Mumbai City FC have equalled the ISL record for 12 matches without a defeat 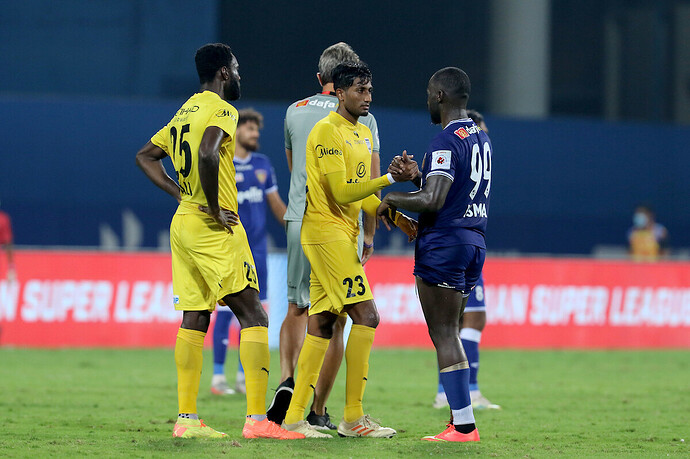 That was Chennaiyin FC’s 7th draw of the season. The most by any team in this ISL campaign. 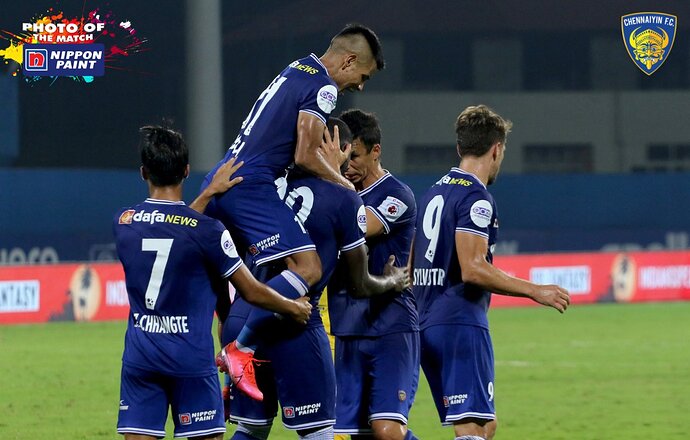 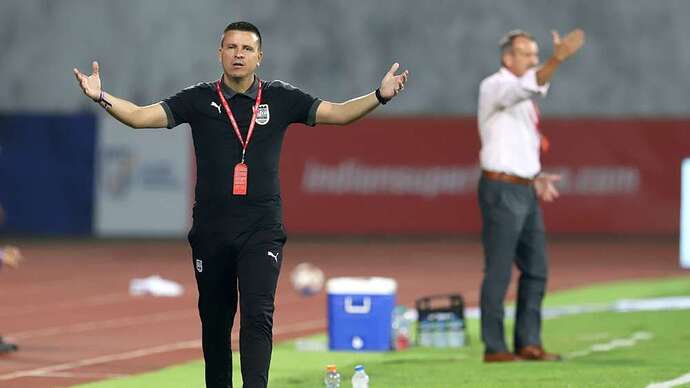 Mumbai City’s unbeaten streak in the ongoing Indian Super League (ISL) extended to 12 games but they failed to register a win against Chennaiyin on Monday.

Sergio Lobera was unhappy after the game as he felt that his team dropped two points.

“I am disappointed with the result because my players have to be careful. They played a very good game and I am happy compared to the last game against East Bengal but when you drop two points obviously I cannot be happy.”

Lobera admitted that Ahmed Jahouh’s mistake cost the team two points but he wants to move on and shift his focus to the next match.

“We need to avoid these kinds of situations. We have players with experience and we need to know when to do certain things and when not to do. Obviously, it was a big mistake but now we have to focus on the next game. (Ahmed) Jahouh is a very good player and has done well throughout this season but he needs to improve in certain areas. Today he gave away a gift and we lost two points,” said the Spaniard.