In the last one month, (January 21 to February 21). Hyderabad FC have had the best defence in the league. They have played six matches in this period and have conceded just three goals. 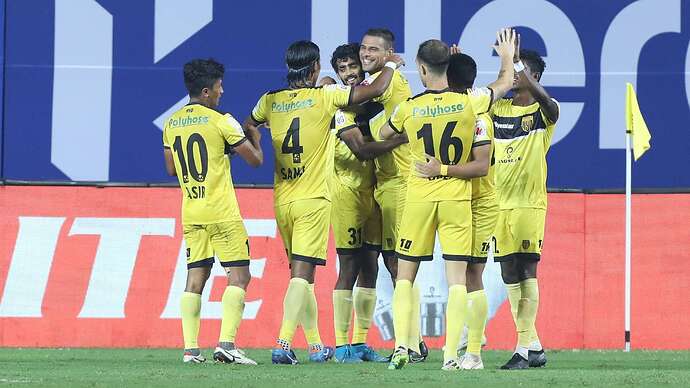 Both Hyderabad FC and ATK Mohun Bagan are at the top of their form and will bring their A-game in the match. While the former is unbeaten in their last ten matches, the latter is on a five-game winning spree.

Hyderabad FC’s Asish Rai is nursing a hamstring injury. His availability remains uncertain. ATK Mohun Bagan, on the other hand, have no suspension concerns and are injury-free. 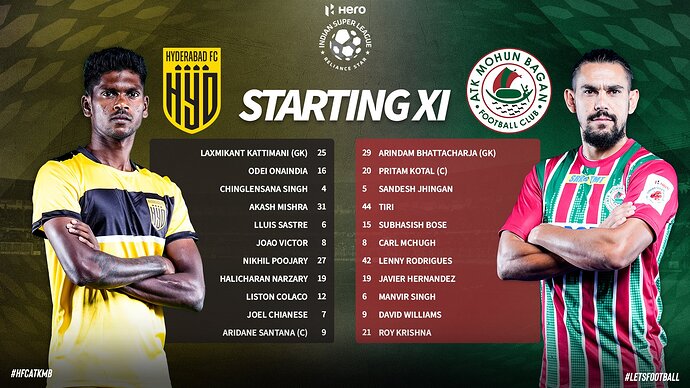 Goals Conceded in the ISL this season

ATK Mohun Bagan missing in this table! Or are they in a different ‘league’ and un-comparable to the rest?

Or are they in a different ‘league’ and un-comparable to the rest?

In their last five matches ATK Mohun Bagan have scored 13 goals in the Indian Super League, they scored the same number of goals in 13 games prior to these five matches. Attacking. 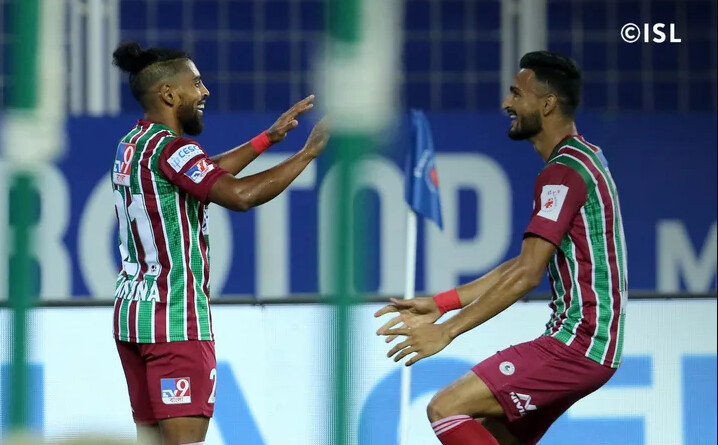 A red card and a goal scored in the first 10 minutes for Hyderabad FC. That’s one way to start a near must-win match. 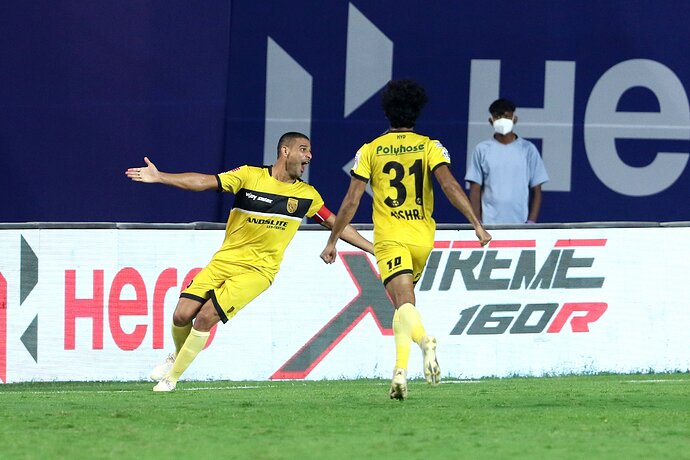 This was to happen. The problem is you just cannot introduce all your striker at one go.

Manvir needs to replace by Prabir as quick as possible. In place of leny or McHugh pronoy needs to be introduced.

Needs to reinforce the mid right in the start of 2nd half.

Chances are wasted. Refs need to take care about the flow of the match. It’s not always you have blow the whistle. Some times advantage can be given as per rule.

One sloppy mistake and Santana is there to capitalize.

If ATKMB wants to win they need to focus on mid. Roy will score if he get one half chance but the mid has to provide that half. 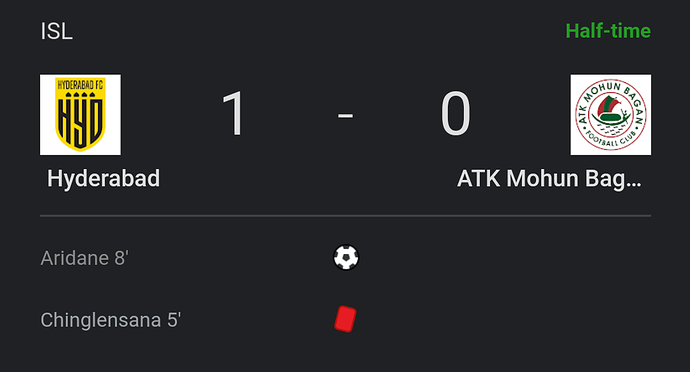 In previous year ATK was in this kind of situation for the first place. They were crumbled in pressure. They lost the game to qualify for the champions league.

This time that must not happen. Today’s result was might be because of the pressure. 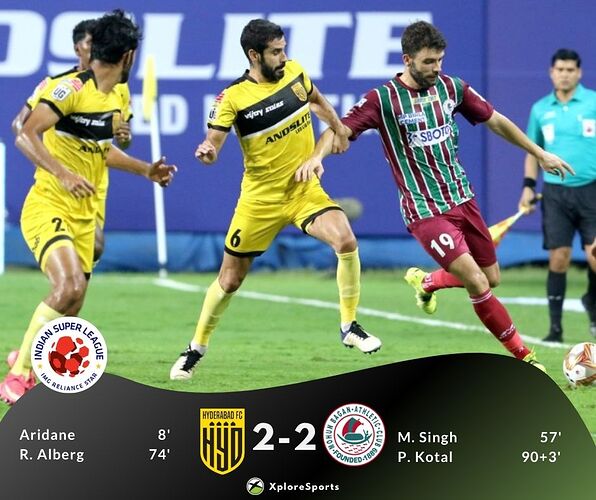 What an entertaining game of football! Four goals and a red card, this match had everything.

It all started with Sana being sent off after which Aridane scored to give HFC the lead. Manvir equalised in the second half for ATK Mohun Bagan but HFC took the lead again through a fantastic strike from Roland Alberg. In the dying embers of the match, Kattimani’s mistake cost HFC as Pritam Kotal turned the ball in to level the proceedings once more.

Hyderabad and FC Goa will have all to fight it out in their last match of the league stage. NorthEast United FC have the advantage now. ATK Mohun Bagan failed to seal the top spot in the table and will now play a decider against Mumbai City FC on Sunday.

"Playing that long against ATK Mohun Bagan was very tough. The last goal was a shame. We have to try and win the last game. It’s impossible to not be proud of these boys.

"Sometimes when you are with 10 men, sometimes it’s tough for opposition because you are attacking only when you can. Your position is actually better. It’s tough to do it for more than 90 minutes and that’s the merit of this team. It’s a shame to concede in injury time, I don’t know how many times we have conceded in injury time.

"I don’t like to cry (about the offside). It’s easy to cry when the decision goes against you but say nothing the other way around. The referees can go wrong just like the players and the coach. The level will grow. Congratulations to my players, we will try to win against Goa but if we can’t congratulations to the four teams that will.

“In my opinion, all the teams who qualify for playoffs will have a chance to win.”

contributor for his side 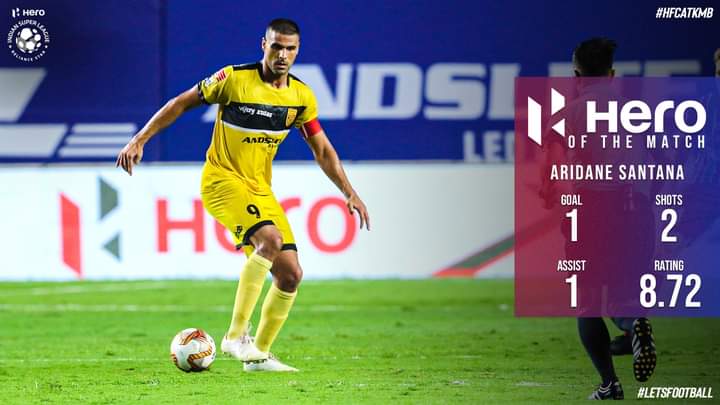 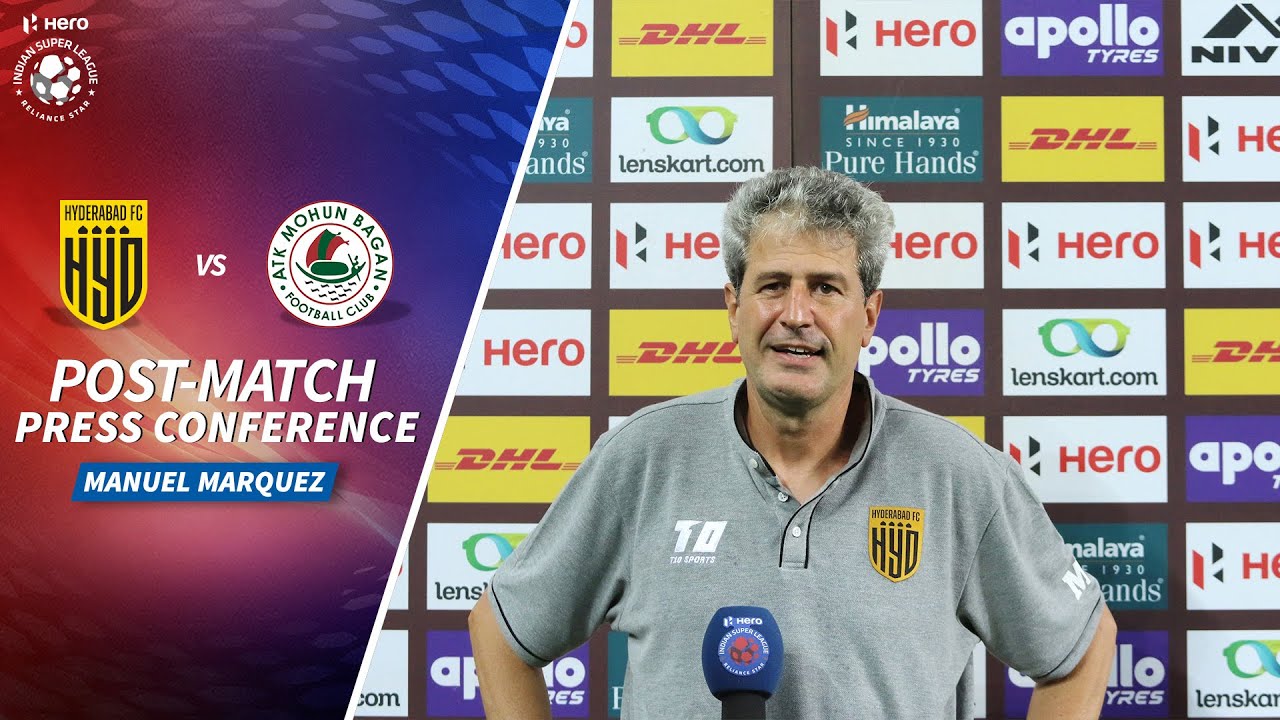 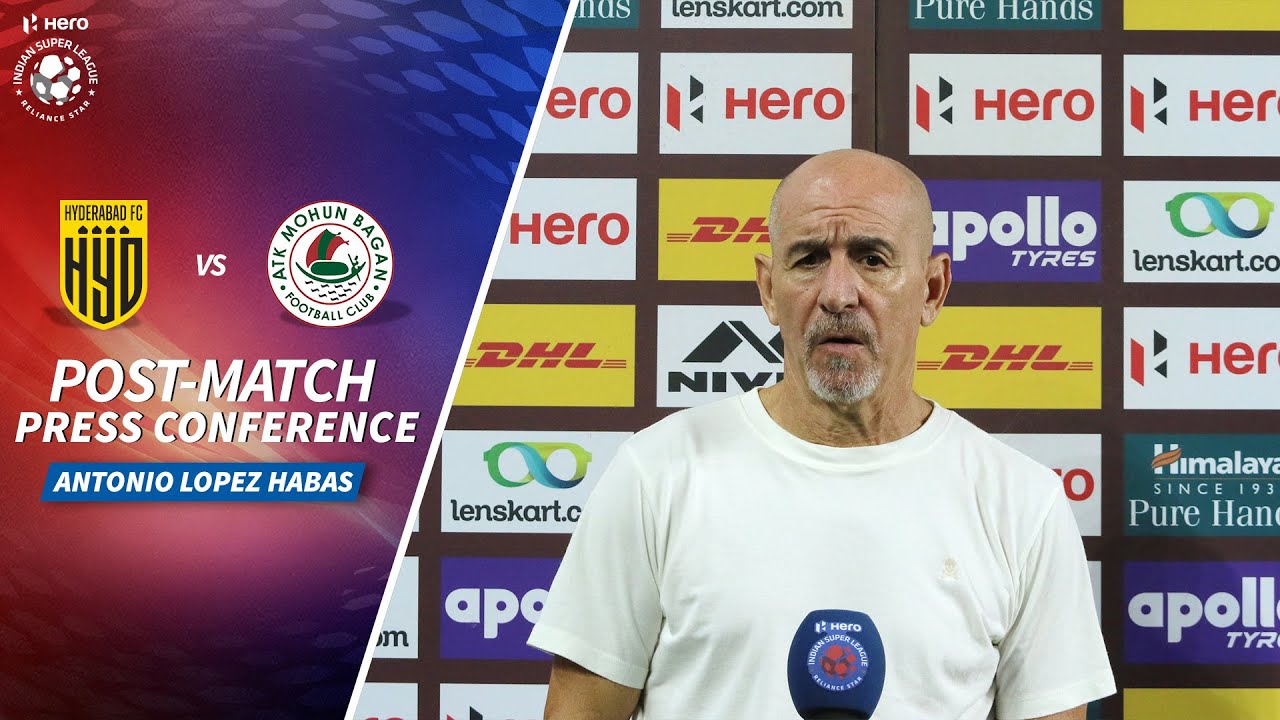 Check out an action-packed highlights of the game. 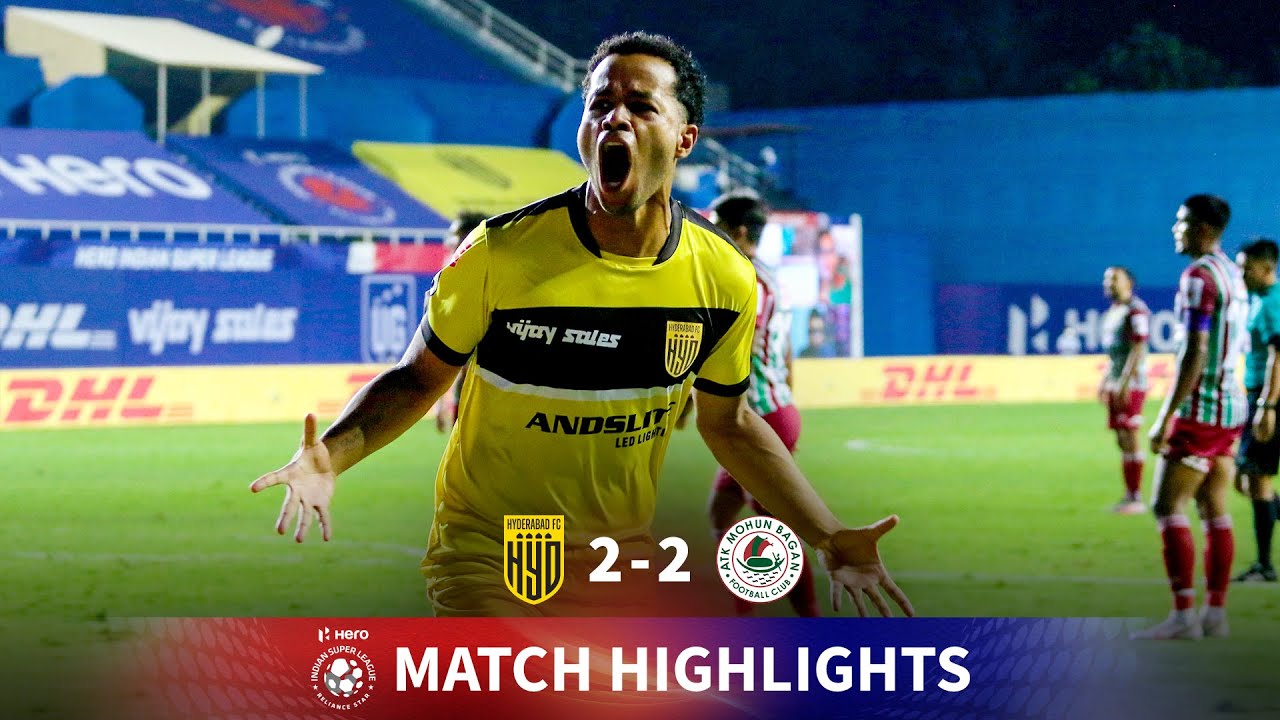 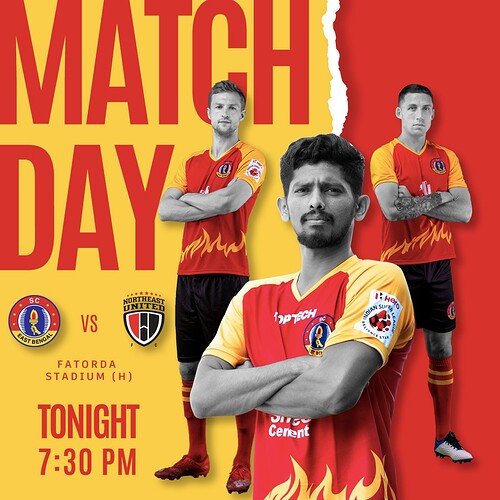 NorthEast United FC face off against SC East Bengal at the Fatorda Stadium on Tuesday. The Highlanders need a win to keep their hopes of qualifying for the semi-finals intact, while SC East Bengal will be looking to finish their campaign on a strong note with some positive results from their two remaining matches this season.

The Red and Gold Brigade lost 3-1 to ATK Mohun Bagan in the Kolkata Derby last time around. They failed to capitalize on their few chances and their only goal from the game was an own goal. However, their biggest concern heading into the game against NorthEast will be their defensive frailties that’s held them back this season and has played a role in the Kolkata club winning just one of their last eight matches.

SC East Bengal have managed to keep just three clean sheets this season despite roping in seasoned Hero ISL campaigner and custodian Subrata Paul in the winter transfer window. They have conceded 25 goals so far and eight of them have come during the final 15 minutes of games when they seem, particularly, susceptible. Against their city rivals, it was skipper Daniel Fox’s mistake that gave the Mariners a lead in the second half.

Meanwhile, NorthEast United’s unbeaten run of eight matches has pushed them into contention for a top four spot. A lot of this progress is down to their marked improvement in the attacking third. The Highlanders have scored 27 goals in 18 matches this season, and 15 of these goals have come during the ongoing unbeaten run.

SC East Bengal Assistant Coach said ahead of the game

"The derby was a tough result to take… we have had an eye on next season more than this season. We have brought in a couple of players who have improved us. The Highlanders have done great. They started the season very well. The have a good blend of youth in the team and they deserve to be in the top four. It’s going to be a test but that’s the best time to see what your players are made of,” SC East Bengal’s assistant coach Tony Grant said ahead of the game.

“We have to play very well against SC East Bengal. We have to defend and attack well, create chances and utilize the ones that we have. We have to give our 100%. They (SC East Bengal) lost 3-1 against ATK Mohun Bagan in the last game. But this is a game we cannot take easy. We should give our best efforts in the 90 minutes and hopefully we will get the three points,” NorthEast’s assistant coach Alison Kharsyntiew said ahead of the match.

Their only meeting in the league resulted in a NorthEast United win.