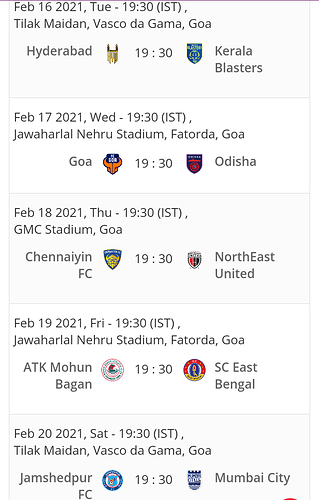 Here’s the team of the week from Round 19 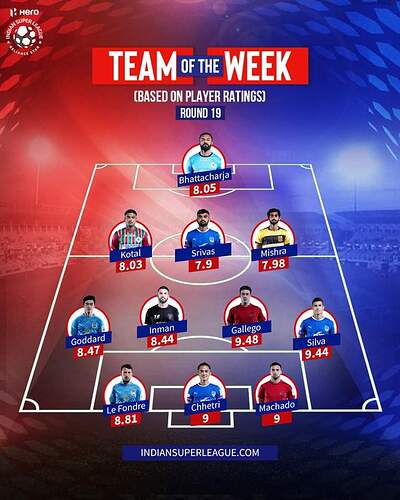 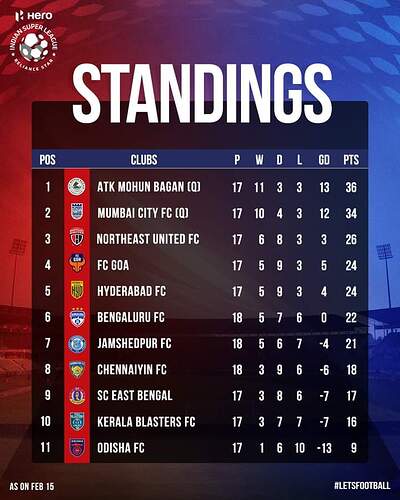 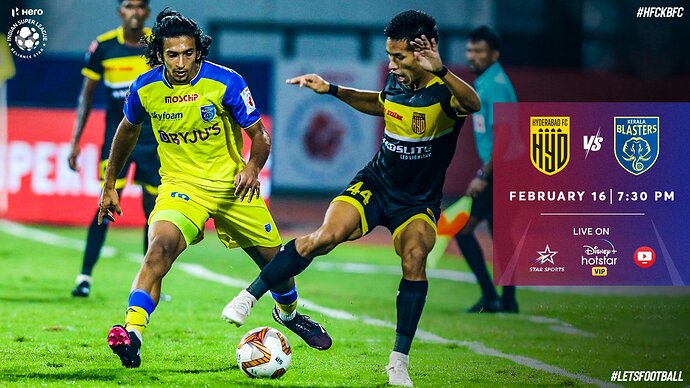 Hyderabad FC take on Kerala Blasters FC at the Tilak Maidan Stadium in Vasco on Tuesday. Aridane Santana’s late goal earned a point for Hyderabad against SC East Bengal in their last match, while the Blasters were also held to a draw against Odisha FC in their previous encounter.

Manuel Marquez’s side are in the reckoning for a top four spot and will want three points against the Blasters before they take on ATK Mohun Bagan. The Telangana-based club are unbeaten in their last nine matches, but six of those games have ended in draws. These draws can be put down to their inability to convert chances.

Hyderabad’s last two matches ended as 0-0 (against NorthEast United FC) and 1-1 draws. They collectively attempted 16 shots in both matches, but only six of them were on target and Marquez will know that his players need to do better against Kerala’s leaky defence, which has conceded 29 goals this season. Scoring goals will also help improve Hyderabad’s goal difference, which could play a part in determining the remaining two semi-final spots.

Meanwhile, the Blasters’ defence has let them down this season. After their last match against Odisha, Kerala have now dropped points from winning positions for a third match in a row. They scored early against both ATK Mohun Bagan and Mumbai City, but conceded late goals to lose those games. In their match against Odisha, Kerala scored twice in the second half to take the lead but only managed to secure a point.

Kerala should have defended better against Odisha and both the goals that they conceded against them could have been avoided. They’ve struggled at the back all campaign having conceded the most penalties (7) and also allowed a massive 82 shots on target.

Hyderabad FC Coach ahead of the game

“It’s a very important match. We are in the last three games. We know that at this moment NorthEast United, FC Goa and Hyderabad still have a chance to qualify. We have to win the next game against Kerala if we want to make it to the top four. We are unbeaten in nine games but six of them have been draws. We have to try to win the next match because we have had a fantastic season,” said Hyderabad’s head coach Marquez.

Kerala Blasters Coach ahead of the game

“We are focusing on the next three games, especially the game against Hyderabad. After the last match, we have analysed the game. We are correcting the things that we have to correct. We are only focusing on the remaining three games and trying to get the nine points. We are playing for the fans. We want to finish in the best possible place on the league table. We are going to fight every game for the three points,” Kerala’s head coach Kibu Vicuna said ahead of the match. 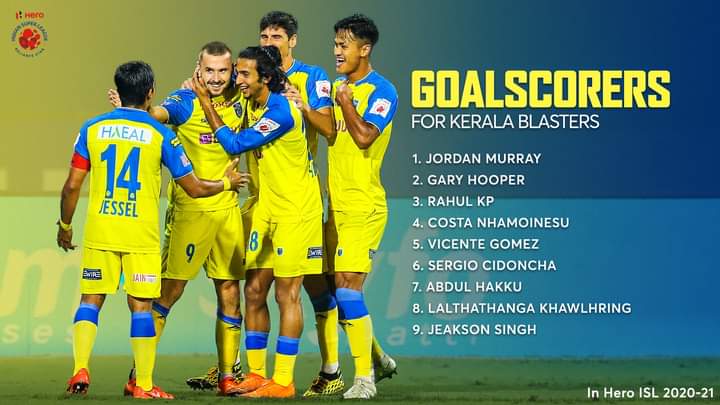 FC Goa captain Edu Bedia has been issued a show cause by the AIFF disciplinary committee regarding unsporting behaviour (biting Deepak Tangri). He has time till 10pm on Wednesday to respond. 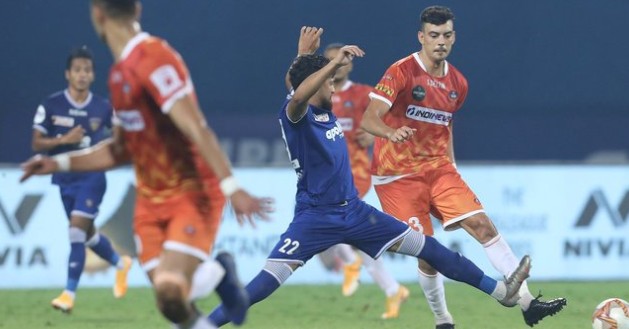 During Saturday’s ISL encounter it emerged that Bedia had bit opposition CFC defender Deepak Tangri around his waist after the defender had charged Bedia from behind. The player, though, has denied the charge as he claimed it was just a gesture of anger due to the challenge and not a bite. We will know the verdict after Wednesday’s deadline.

Hyderabad FC have now scored 21 goals in the 17 league games. 17 of those 21 have come in the second half of games this season. In comparison, Kerala have scored 11 goals in the first half of their games and 13 in the second half, which brings it to 30 goals scored by the two teams, after the break. This promises a thrilling contest till the final whistle in Vasco. 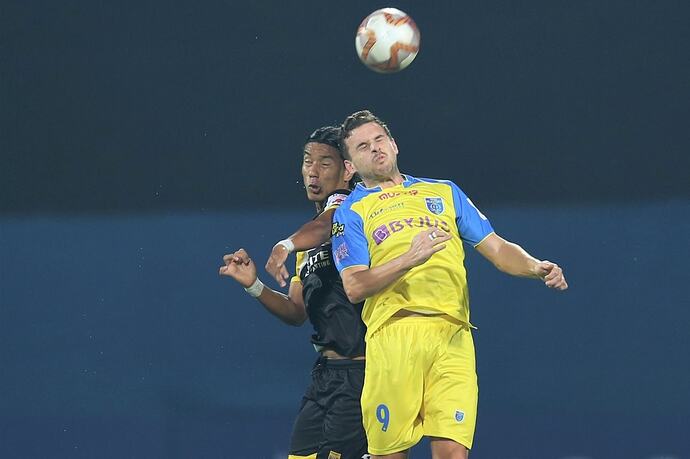 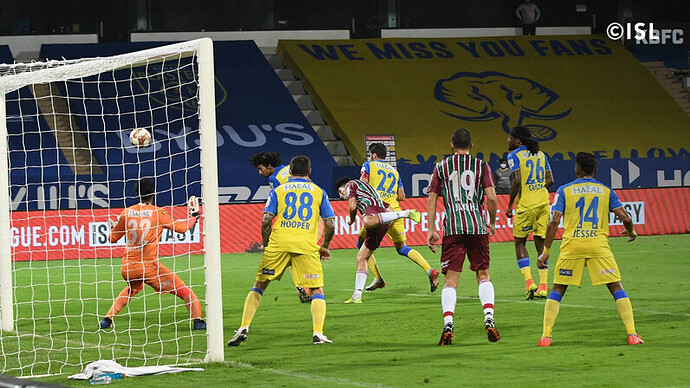 Hyderabad FC now have 4 clean sheets since the turn of the year. The Blasters have kept just three clean sheets all season. 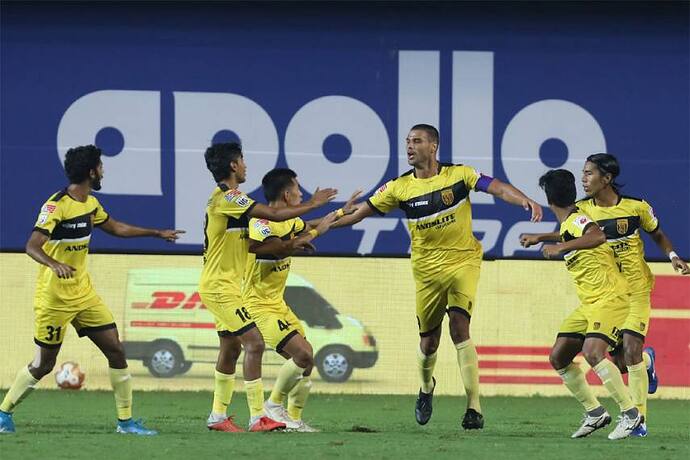 Hyderabad FC’s full-back Asish Rai is third in the list for interceptions completed in the ISL this season, with 48 to his name. Kerala has Vicente Gomez at the top of this list, who has made 22 interceptions this season. 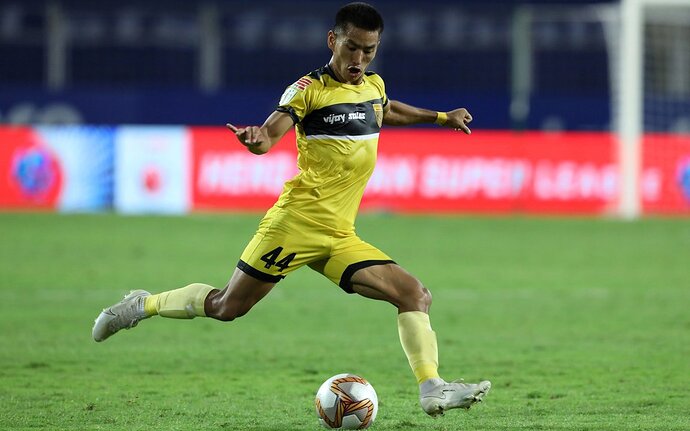 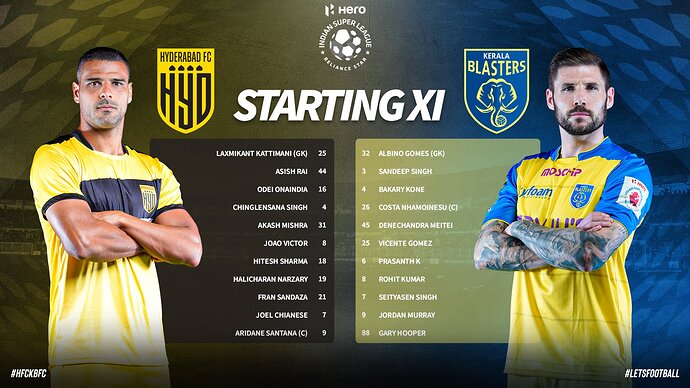 Hyderabad’s Odei Onaindia and KeralaBlasters’ Costa Nhamoinesu are the only defenders who have played more than 10 games in the current campaign of the ISL and are yet to be dribbled past by any opponent. Solid. 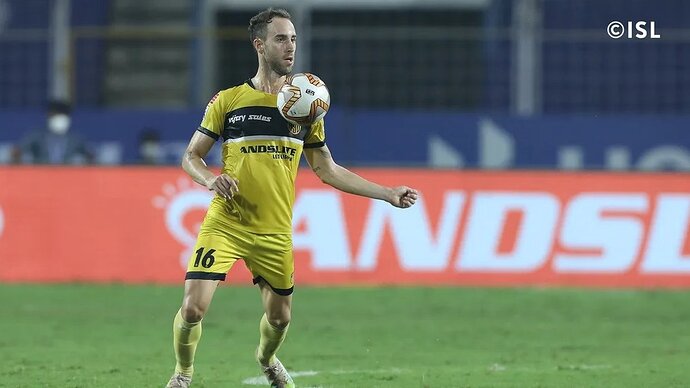 Evenly contested so far in Vasco! 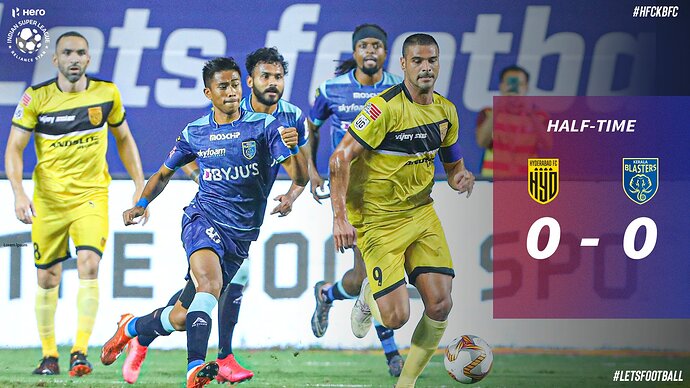 The Blasters have now conceded 29 goals in their 17 league games this season.

The Blasters are 2 goals down which means they have now conceded the most goals in ISL this season with 31 goals conceded, 1 goal more than Odisha FC…

Hyderabad FC have now scored 21 goals in the 17 league games. 17 of those 21 have come in the second half of games this season

“It’s a very important match. We are in the last three games. We know that at this moment NorthEast United, FC Goa and Hyderabad still have a chance to qualify.

As it stands, Hyderabad have now move up to 3rd on the log with a point above NorthEast United and 2 games to go. 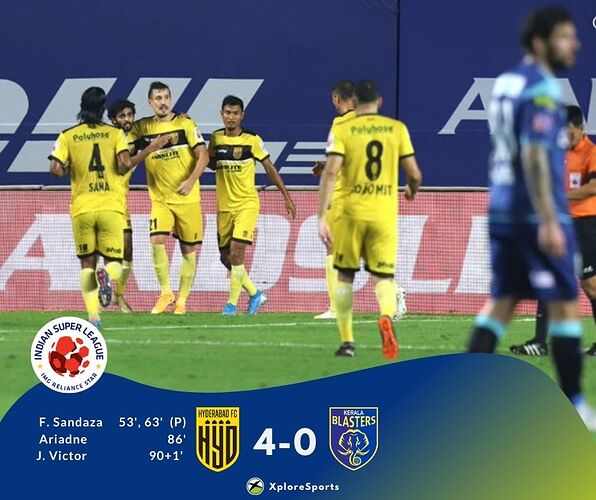 We are unbeaten in nine games but six of them have been draws.