The Matchday 19 of the 2020-21 ISL season kick off today as East Bengal take on Hyderabad FC. 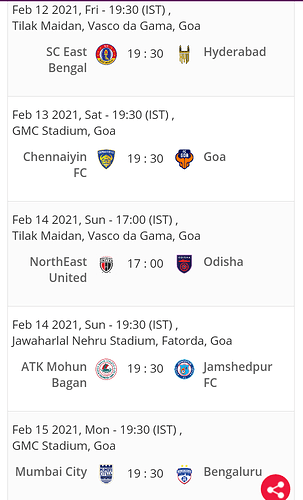 On to the last four rounds of the League stage! 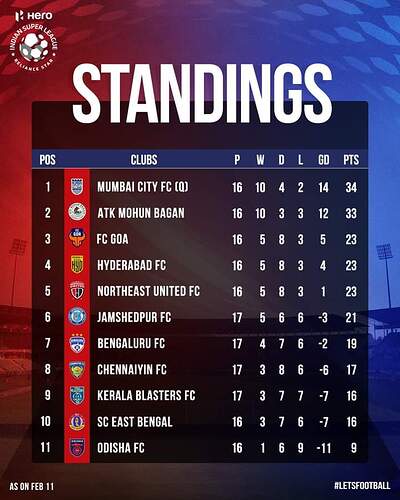 Here’s the Team of the Week from Round 18 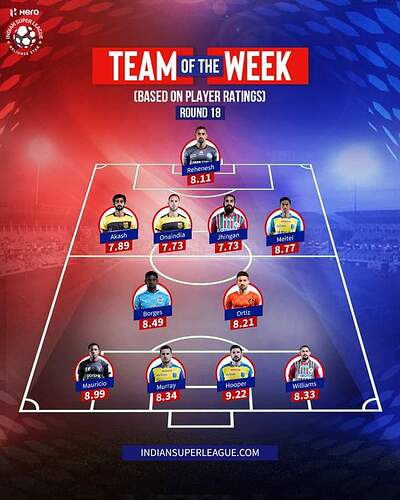 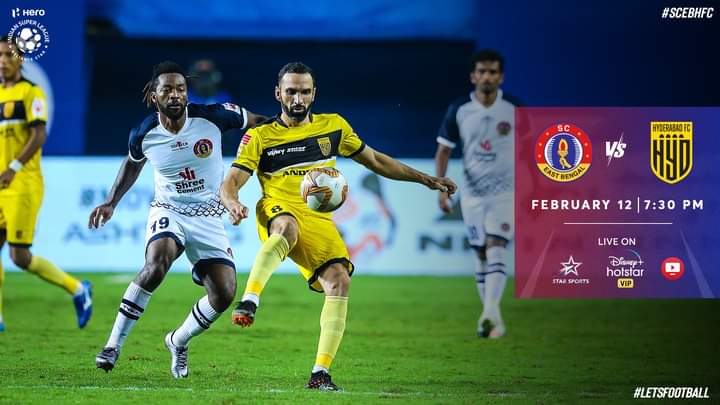 SC East Bengal will be eyeing consecutive wins in Hero Indian Super League (Hero ISL) 2020-21 when they take on Hyderabad FC at the Tilak Maidan Stadium in Vasco on Friday. The Kolkata club have an outside chance of qualifying for the semis but need to win all of their remaining matches to still be in the top four reckoning, while Hyderabad currently find themselves occupying one of the semi-final spots and will need to win against SC East Bengal to strengthen their position.

The two teams were involved in a five-goal thriller earlier in the campaign which Hyderabad won 3-2. Manuel Marquez’s men will be eager for a similar result as they target completing the double over the Red and Gold Brigade. Unbeaten in their last eight matches, Hyderabad are one of the in-form teams in the league and will be eager for a win having secured just three victories during their unbeaten run.

A well-balanced side that has plenty of goal-scorers in the team as well as a solid defence, Hyderabad have netted 20 times this season and have kept four clean sheets in their last six games. They perhaps have the best contingent of young Indian players and also boast a dynamic bench with plenty of depth that’s made a difference to their side’s fortunes on more than one occasion this season.

SC East Bengal, meanwhile, will know that there is no room for error and need to win all their remaining games to have an outside shot at making the semis. Robbie Fowler’s men have demonstrated their mental strength by bouncing back after a poor start to the campaign but need to find consistency and go on a run of positive results between now and the end of the league stage.

How much will form determine the outcome of tonight’s encounter? 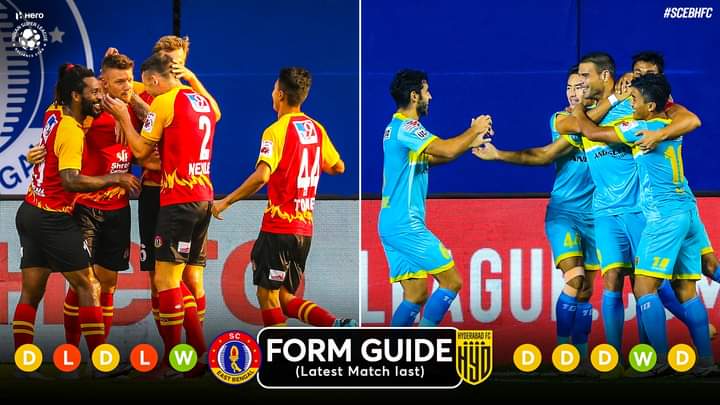 Last gasp goal by Aridane Santana denies SC Eat Bengal all three points. The Hyderabad skipper brings his team back in the game in the dying moments of the match.

Bright Enobkhare gave the Red and Golds the lead in the 59th minute but the Hyderabad skipper scored in the 92nd minute to earn his team a point. 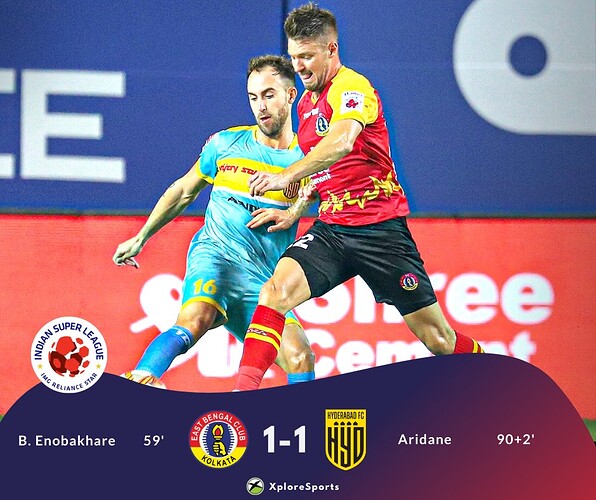 This is Hyderabad FC’s ninth draw this season. Only Jamshedpur FC and Kerala Blasters in the 2018-19 season have drawn so many games in a single ISL campaign. Neither of those teams qualified for the semi-finals 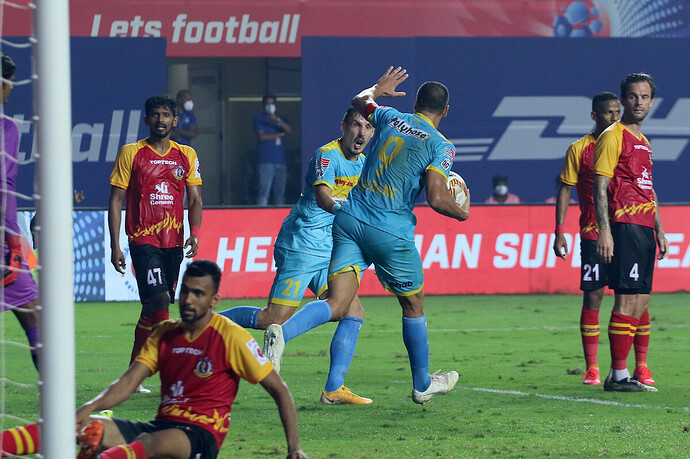 A draw for Hyderabad FC in tonight’s match sees ATK Mohun Bagan become the second team to qualify for the semi-finals of Hero ISL 2020-21!

Mumbai FC had previously secured it’s place in the playoffs after their last game 3-3 against FC Goa. 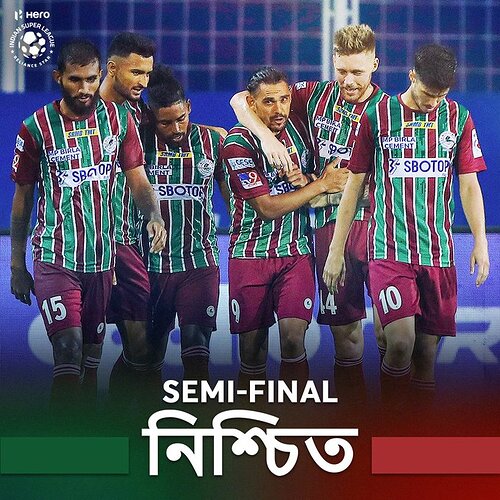 For assisting the opening goal of the game, Anthony Pilkington takes home the DHL Winning Pass of the Match! 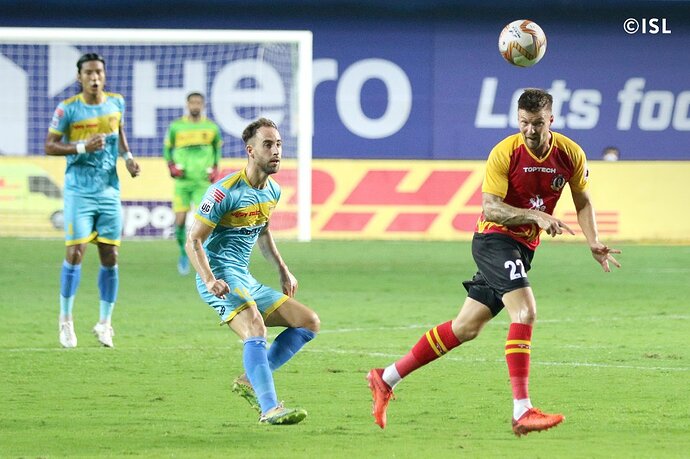 Hero of the Match

For putting in an energetic shift once again, Hyderabad’s Akash Mishra takes home the Hero of the Match award! 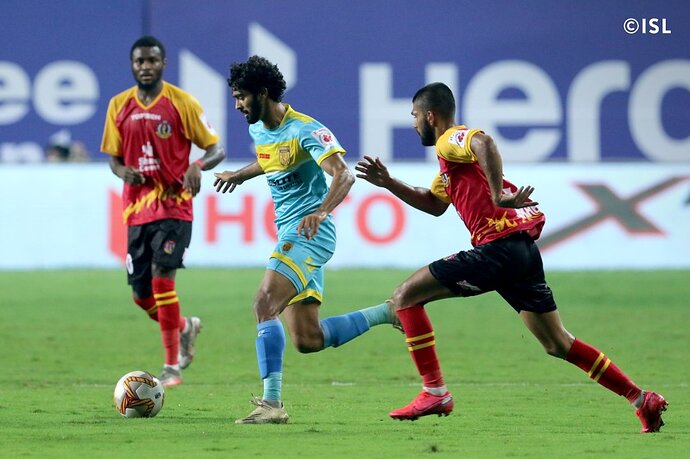 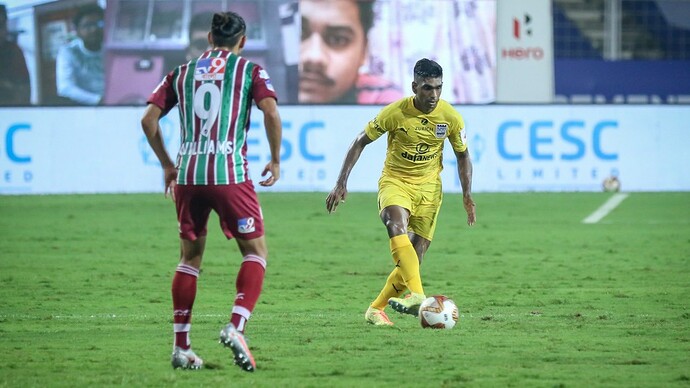 An integral part of the 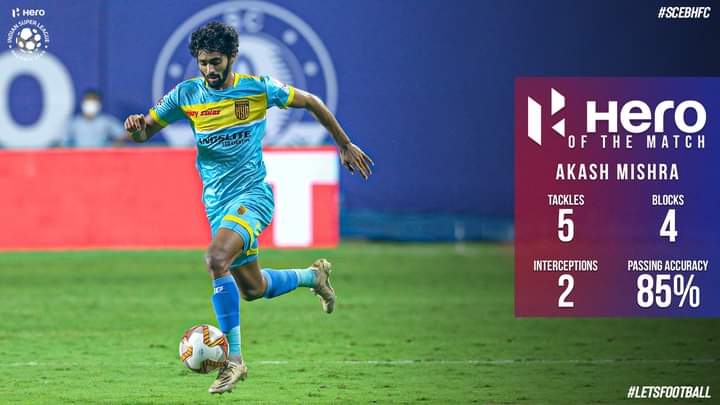 Hyderabad FC’s Manuel Marquez answers questions of the media after his side fought to a 1-1 draw against SC East Bengal.

SC East Bengal’s Tony Grant answers questions of the media after his side fought to a 1-1 draw against Hyderabad FC tonight.

Check out the Full Highlights 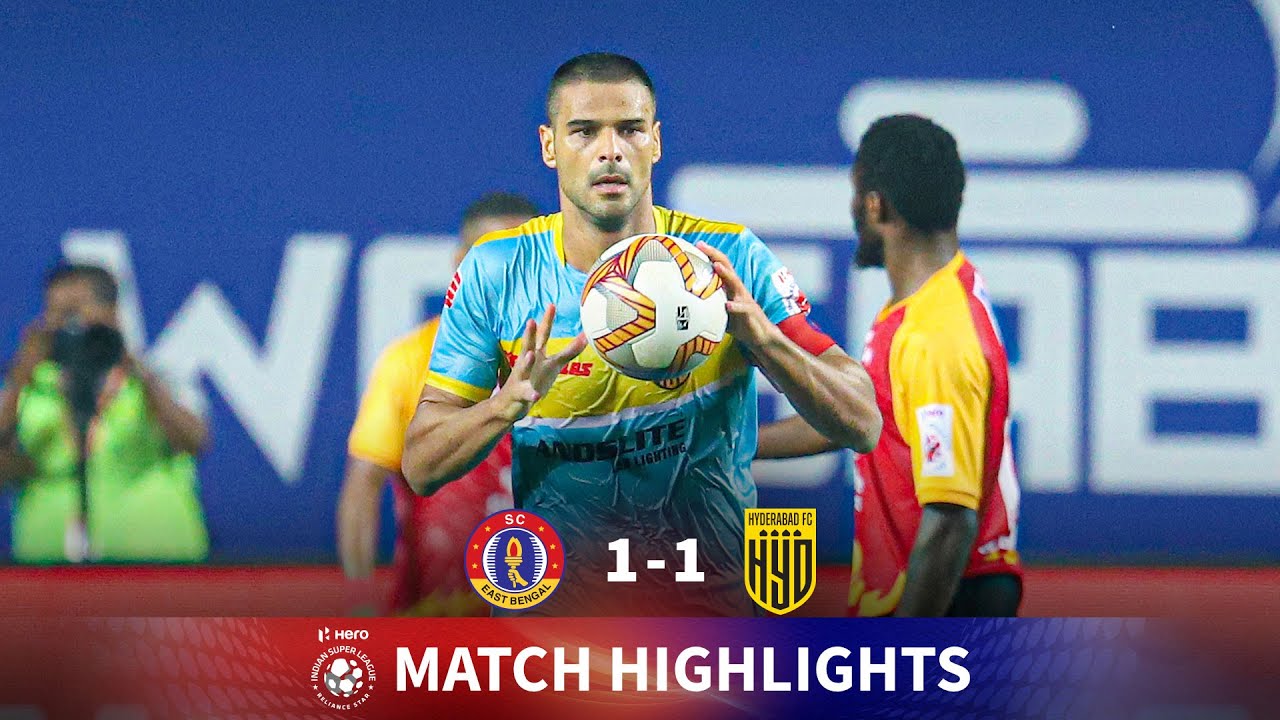 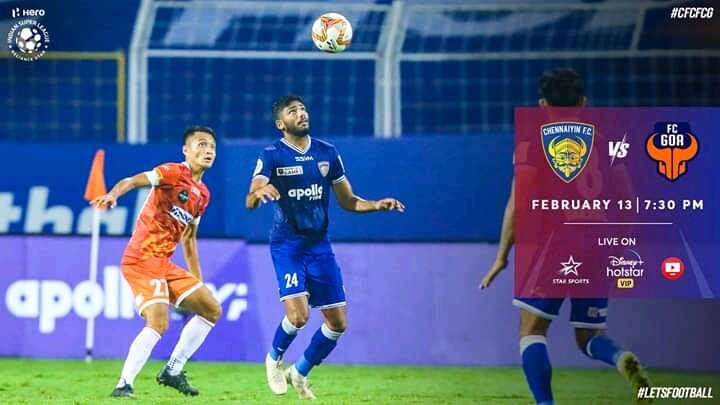 FC Goa will hope to extend their undefeated run in the Indian Super League (ISL) as they host a depleted Chennaiyin FC on Saturday.

Chennaiyin FC find themselves in the 8th place on the ISL standings with just 17 points from as many games. They have been desolate in front of the goal and have only managed to score 11 times in 17 matches so far. It is the worst scoring rate in the current season.

Chennaiyin FC have also drawn 8 games, which further proves their struggles with conversion in the final third.

Csaba Laszlo’s side are mathematically still alive in the league for a top-four spot but their chances look almost impossible at the moment. They succumbed to a 0-1 loss to Jamshedpur FC in their previous ISL fixture, courtesy of an injury-time own goal by their centre-back Enes Sipovic. Anirudh Thapa is not 100% fit for the game and is expected to miss the fixture.

In contrast, FC Goa are in the third place on the ISL standings. They have 23 points from 16 ISL fixtures and face stiff competition from Hyderabad FC and NorthEast United in the top-four race.

The Gaurs have been consistent throughout the season and look poised to seal a playoffs spot. FC Goa like to play with the ball and have an attacking yet tactical brand of style.

They have some quality playmakers like Alberto Noguera, Brandon Fernandes, Jorge Ortiz Mendoza, and Edu Bedia, who have dazzled in the midfield.

FC Goa have drawn their last 5 ISL games and are on a 9-game unbeaten run. A 3-3 draw with table-toppers Mumbai City FC in their most recent ISL fixture must have instilled a lot of confidence in the team. 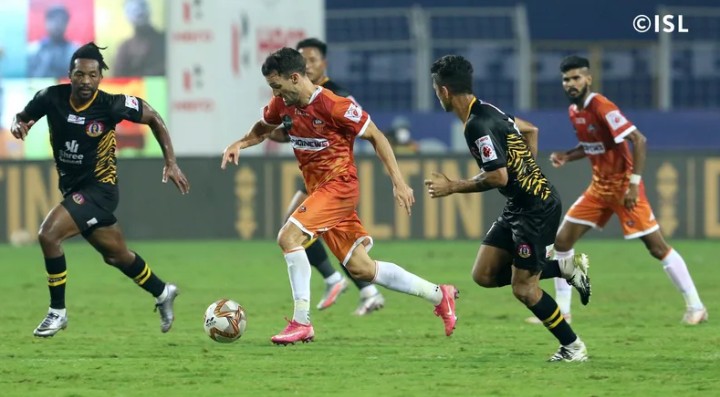 An entertaining first-half comes to an end. It was breathless from start to finish as the two teams go down the tunnel level at 1-1.

Expect more goals in the second half 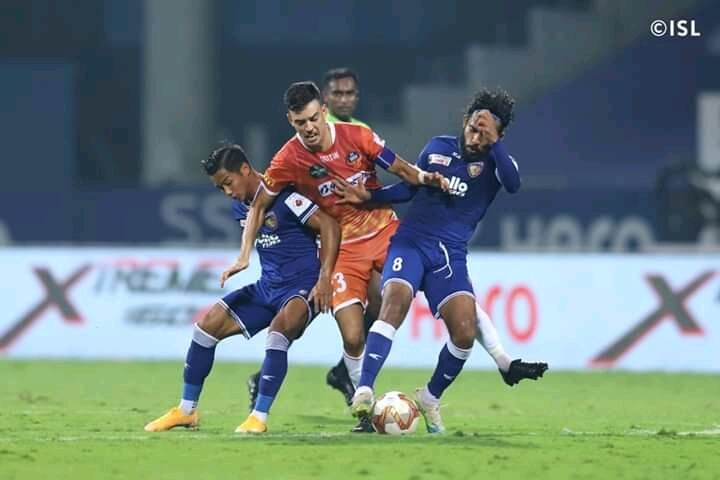 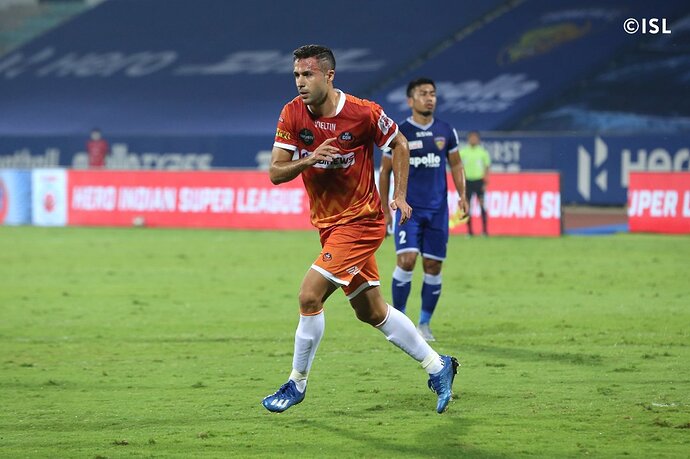 After scoring only once in their last SIX games, Chennaiyin FC finally scores!

This was the second goal of the season for Jakub Sylvester in 16 outings. 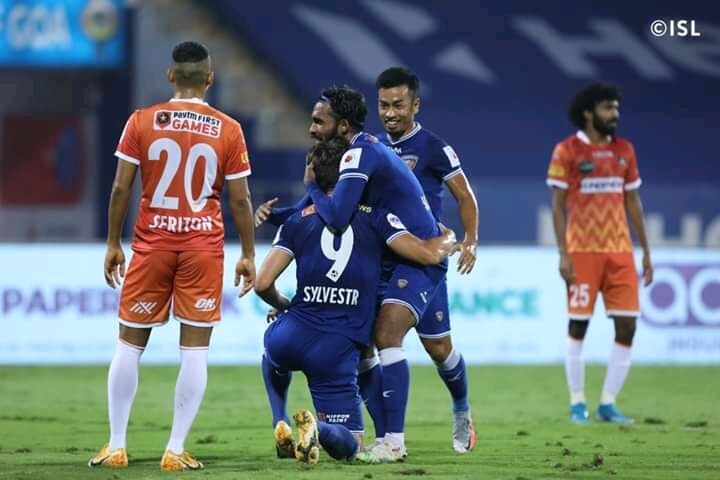