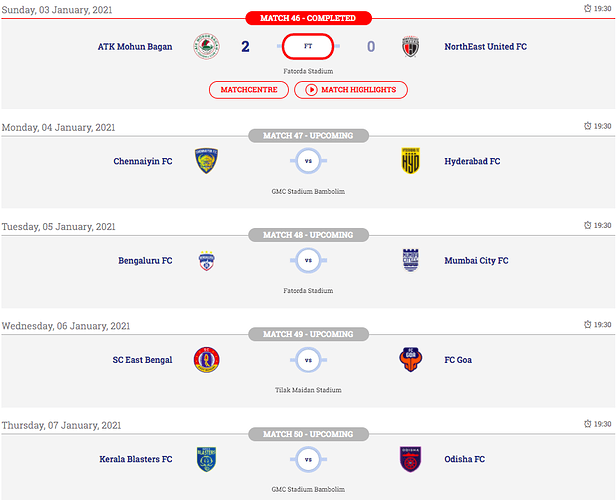 NorthEast is currently 6th on the table with 2 wins, 5 draws and a defeat from 8 matches while ATKMB is 2nd in the table with 17 points and has only lost one match so far. 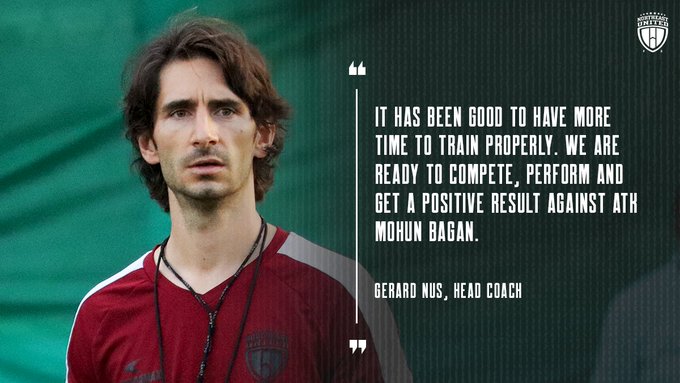 ATKMB pressing well trying to break the dead lock. Wing play is happening but sharpness is lacking. But attacking in numbers. 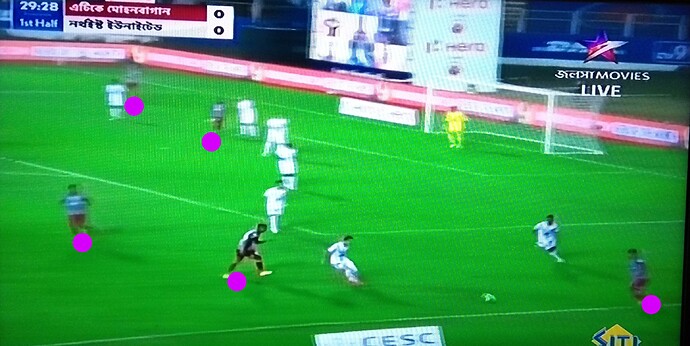 This team is giant killer. They won against Mumbai in the first match. Lambort, fox in CB and camara in CDM is creating a defensive shield. Basic to break this orientation is wing play. But defense is good for the ball in air. In the context of attack this team is completely null.

Trying to attack from wing, but the wing play should be done keeping the ball in ground. Possesion is more unlike the other game. Roy krishna was alone for multiple cases. Prabir was trying to move from the right few times but it seems that he is not completely fit. Previous season prabir was fastest player in almost every game but today he was not even in the list of top 5 fastest player. Manvir will come. Let’s hope that goal will come. 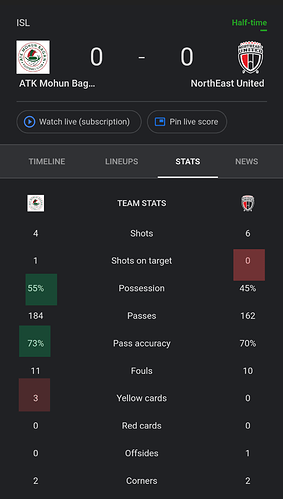 Lambot unforturnate Own Goal and Roy Krishna Header gives ATKMB the win that takes them back to the top of the table. 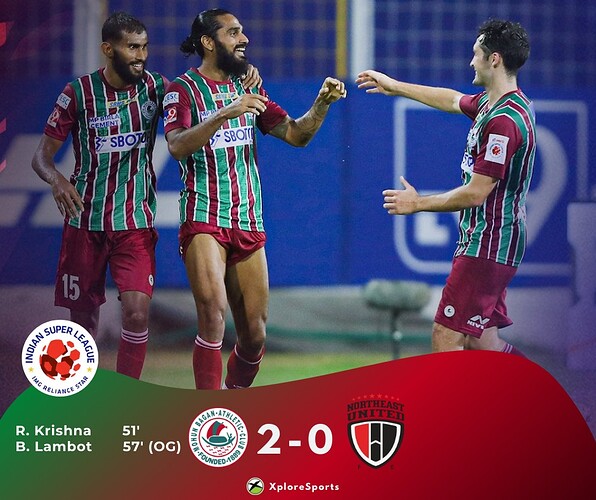 The Kolkata side was the dominant team and despite not much happening in the game otherwise, they were more clinical and got the win. It will be a second loss in three games for NEUFC. 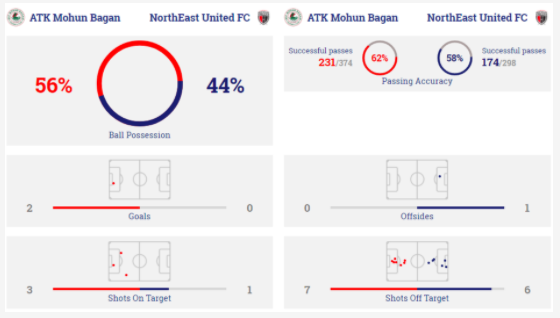 That’s what had happened today with NEUFC defense line. How much would you expect as a manager from your defense? If you expect 90 mins of defense then this exactly this will happen. Sylla is not good moreover if he is the only target man you will not score any goal that’s evident.

Don’t criticize lambot much because if you put aside the OG he played really well. Machado should be played more that will create some attacking moves to provide some time to settle the defense but no the manager wanted a clumsy mess in front of box to disturb the creation of opponent. That move was successful in first half but in second half repeating the same strategy is a blunder.

But but but, the first finish of ROY my word this man knows the goal. Briliant in one word a half chance converted brilliantly, throwing the body in the air and making such a pointer contact on the ball was exceptional in one word.

Refs again was bad in some decision, Galego was sure red card. Williams was fouled several times but not given.

Once again good day for kolkata as the two kolkatan giant had took their win today. 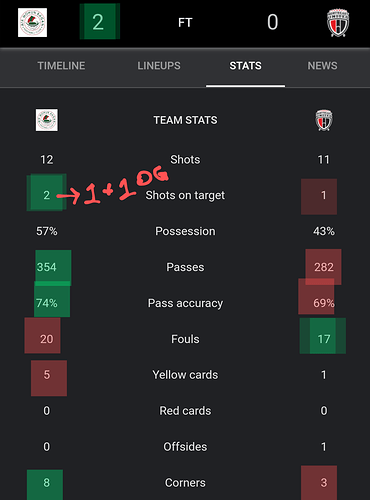 "I think that we did well in the first half, they followed their plan. The two set pieces in the second half cost us the game.

“I disagree that we weren’t good, it was just mistakes in the set pieces. It’s hard when we don’t take the chances. We need to congratulate them at the end. They have the same coach and players as last season and that helps.”

"The second half, the team played good football. I am happy.

“Our side want to play football, quality or not, we have to respect the opponents. I don’t want a single player with arrogance about the way we play.”

This is the 4th time in this season of the Indian Super League, ATK Mohun Bagan FC striker Roy Krishna has found the back of the net with his sole shot on target in a match. Deadly. 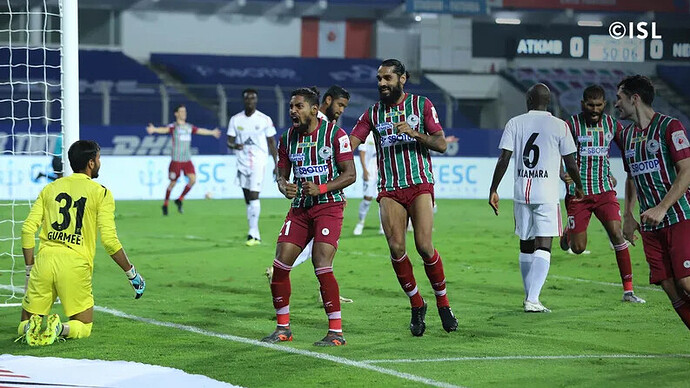 Let’s take a look why ATKMB defense is good. 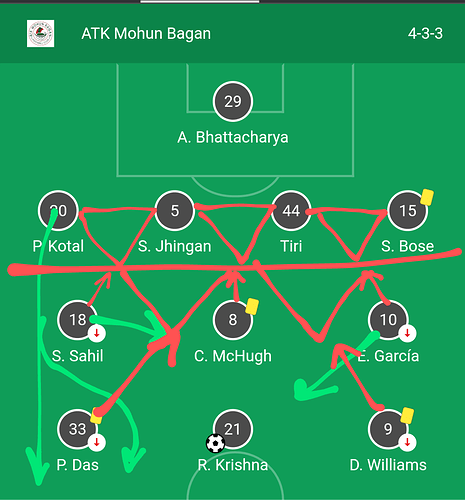 Similarly NEUFC was also creating some more or less defensively. 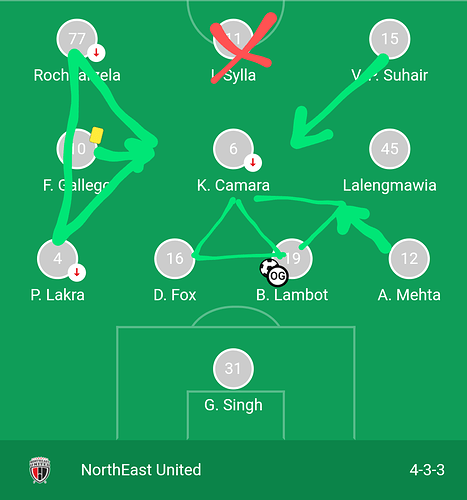 Let’s see if NEUFC manage a controlled diet in their next game, as per your recommendation!

Jay they have to, it’s simple basic.
Appiah was not there today who actually scores for them. Sylla was there,

mark my word balwant is a better striker than him as per the current form. Historically he played for QPR in EPL but those days are gone.

How can you start a game with zero strike force. Expecting that galego will help from set piece only. That’s a bad plan sorry. No team in the world can maintain a deadlock for 90 min. Although there is nothing impossible in football but this is very much near to it. 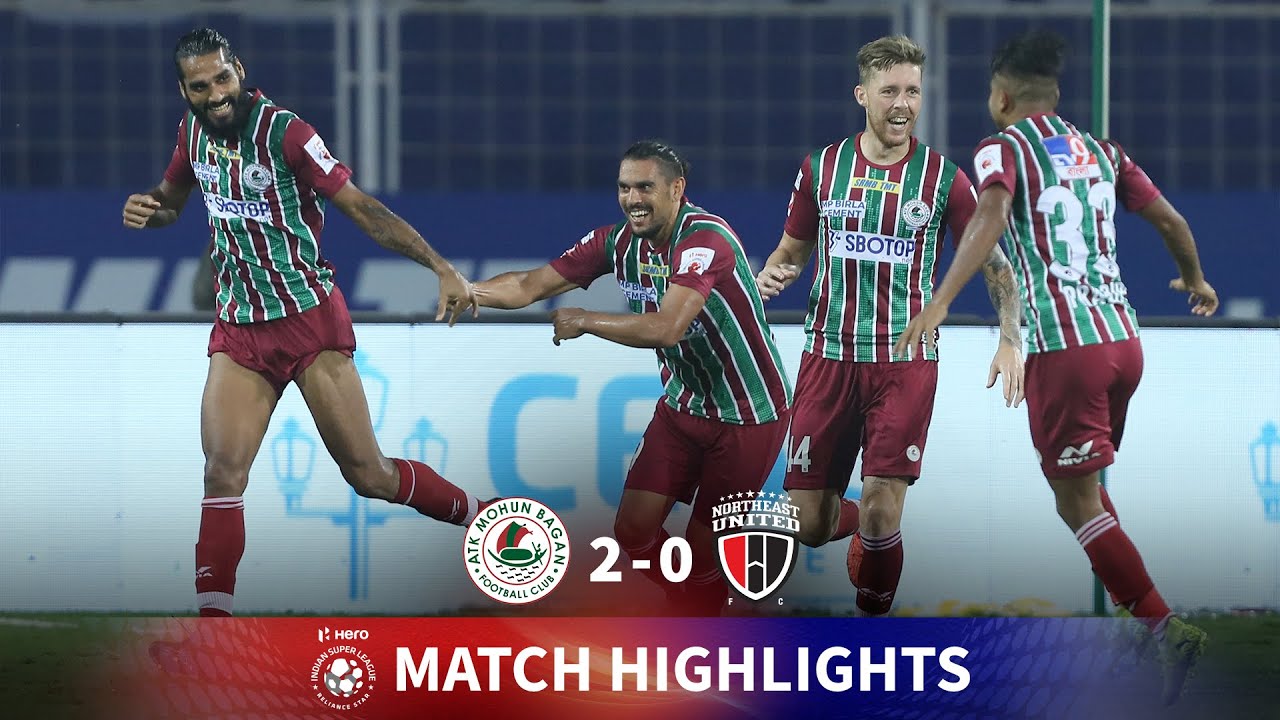 Hero of the Match - Roy Krishna 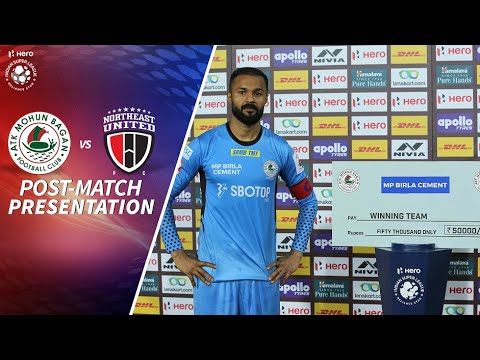 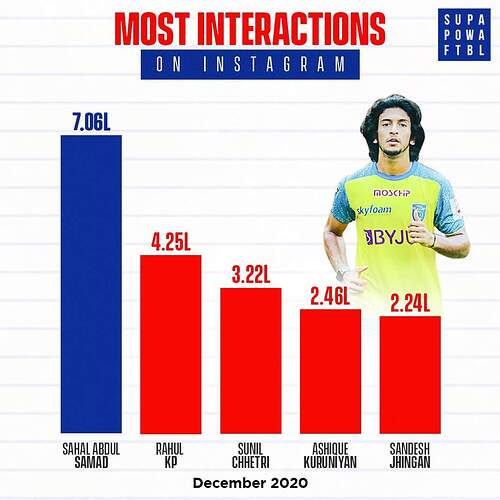 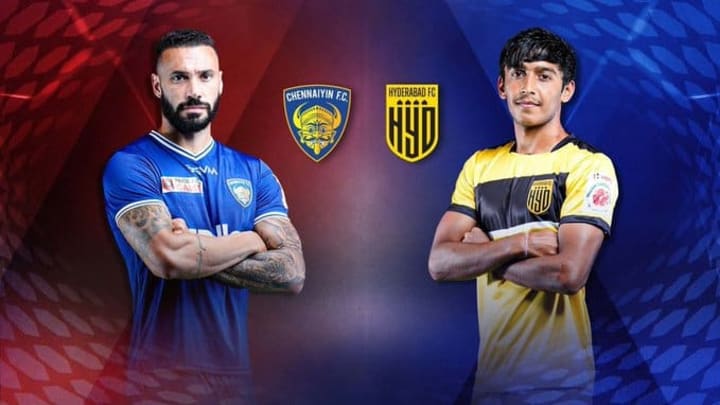 Csaba Laszlo’s side has only two wins from eight games this season. They have been guilty of squandering many opportunities in almost every game they have played so far.

The last two games - against ATK Mohun Bagan and SC East Bengal - have been a perfect encapsulation of Chennaiyin’s season. In both games, the Marina Machans were arguably the better team but managed just a point.

Hyderabad FC’s strong start to the season has been somewhat soured by their performance in their last three games. The Nizams faced a defeat in each of the games.

In their last match against FC Goa, they were in complete control and took the lead through Aridane Santana in the 58th minute. However, Ishan Pandita equalized late in the game, and Igor Angulo scored the winner in stoppage time to condemn Hyderabad to their third straight loss of the season.

Chennaiyin beat Hyderabad in both the games they played last season. The first face-off at the Jawaharlal Nehru Stadium in Chennai was a classic, with three goals in second-half stoppage time. Nerijus Valskis and Andre Schembri gave Chennaiyin the win.

In the reverse fixture, Chennaiyin were rather more comfortable, as they won 3-1 at the GMC Balayogi Athletic Stadium in Hyderabad. 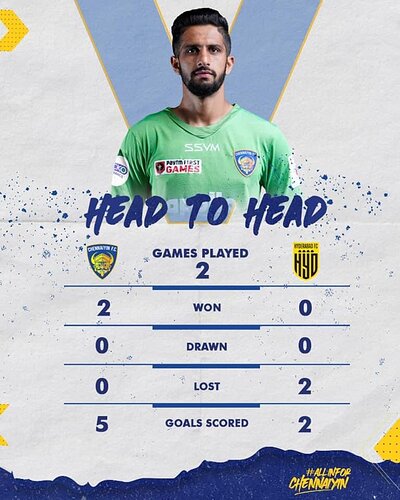 Chennaiyin FC recovered well from two back-to-back losses earlier in the season, to go on a four-match unbeaten run.

Will the unbeaten run continue tonight? 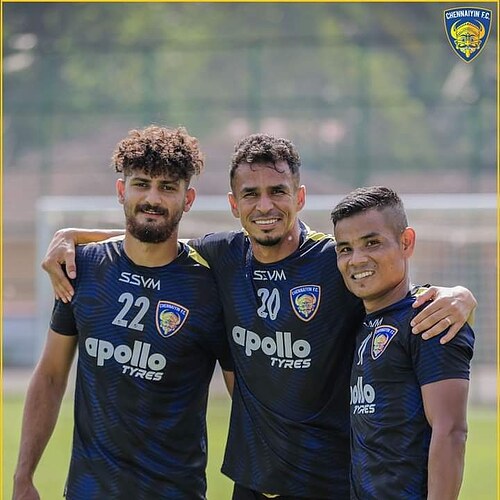 Chennaiyin have also been guilty of giving away cheap goals from set-piece situations despite the presence of aerially strong players.

Csaba Laszlo’s men needs to gear up for that tonight. 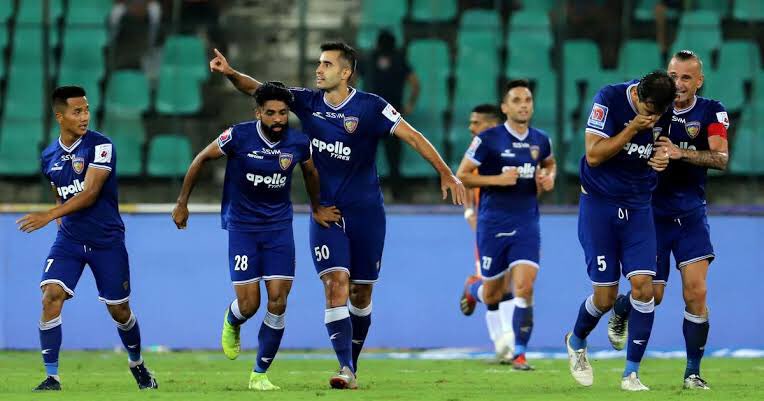 Yasir, Odei, souvik, akash, asish and santana these all players are playing really well. But chianese misses 4 standard chances. I think if Liston was there he could have finished any one of them. You always have to pick a foreigner that’s not essential.

For CFC ,crivellaro was missed. Sabia and sipovic played again nicely. Changte was good along side thapa. Tangri was again good. Vishal k saved some excellent shots. Jerry was moving well. Silvestra was a bit off colour.

Goals may come. But hydrabad should introduce Liston as early as possible. 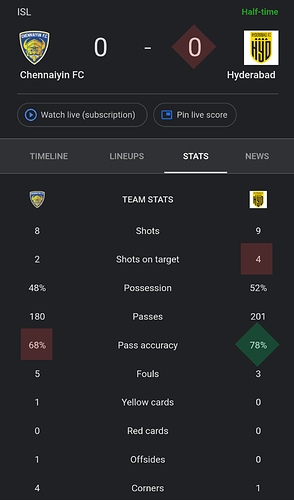 What a comprehensive win for Hyderabad FC!

First goal for Hyderabad came off a mistake at the back for Chennaiyin but the designate home side collapsed at the back there on in. Hyderabad was too good today. Chennaiyin missed its skipper Rafael Crivellaro. Narzary scored two superb goals with his left foot.

Hyderabad has bounced back from its three successive losses with a big win which takes it to 6th on the table. 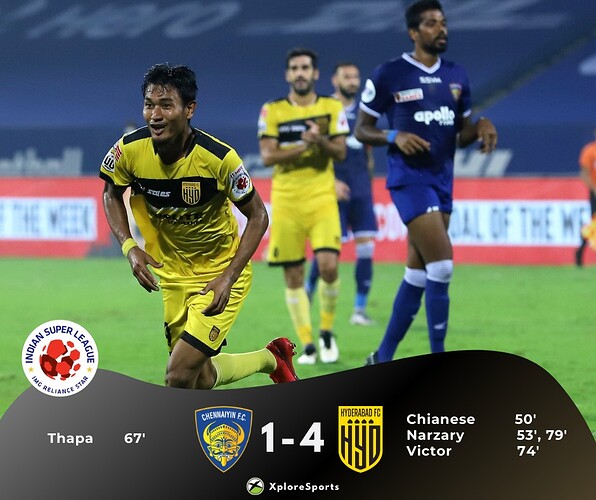