The ten group winners qualify for the 2022 World Cup. The ten group runners-up will be joined by the two best group winners from the 2020/21 UEFA Nations League overall ranking that have neither qualified directly for the final tournament as European Qualifiers group winners, nor entered the play-offs already as European Qualifiers group runners-up. The 12 teams will be drawn into three play-off paths for one-off semi-finals and a final. The three path winners qualify for the World Cup.

In this thread, we shall be covering all European Qualifying Matches from Matchday 1 to Matchday 3 (Wednesday 24th March to Wednesday 31st March)

Join us in the Discussion and share your views on the various Matches and anything in between.

Matches kick off at 20:45 CET unless otherwise stated. All times CET.

Group A: Portugal vs Azerbaijan Serbia vs Republic of Ireland

Group D: Finland vs Bosnia and Herzegovina, France vs Ukraine

Group B: Spain vs Greece, Sweden vs Georgia

Group I: Andorra vs Albania, England vs San Marino, Hungary vs Poland 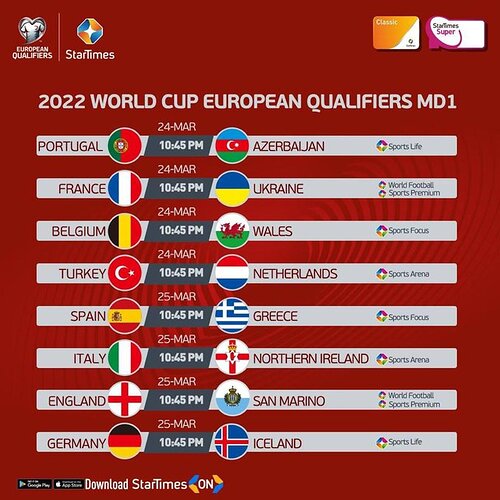 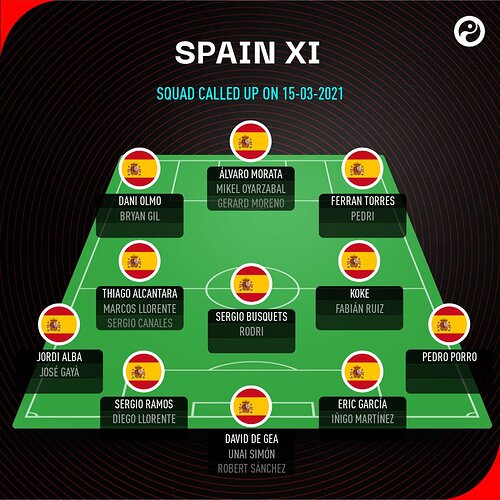 OFFICIAL: Germany have announced their squad for their upcoming World Cup qualifying fixtures. 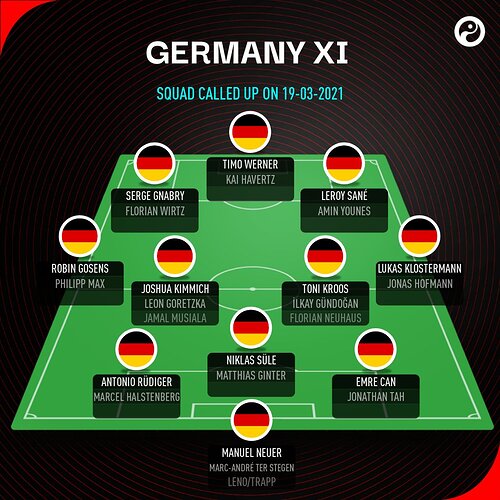 OFFICIAL: England have announced their squad for the upcoming World Cup qualifiers against San Marino, Albania and Poland. 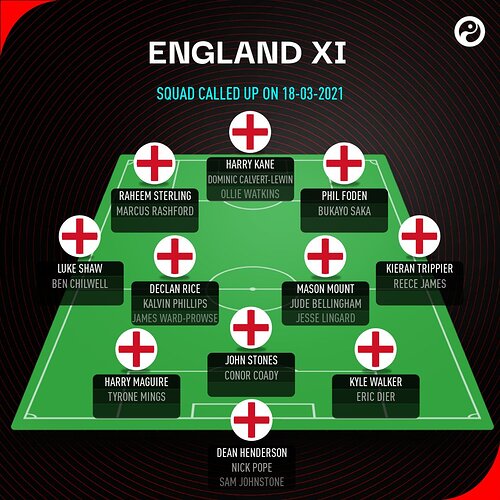 OFFICIAL: France have announced their squad for their upcoming World Cup qualifying games against Ukraine, Kazakhstan and Bosnia and Herzegovina. 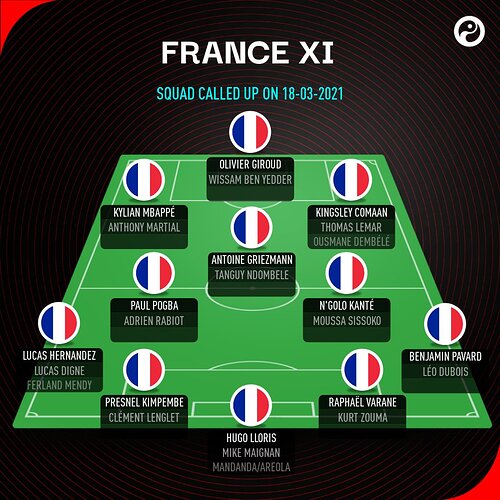 OFFICIAL: Belgium have announced their squad for the upcoming World Cup qualifiers. 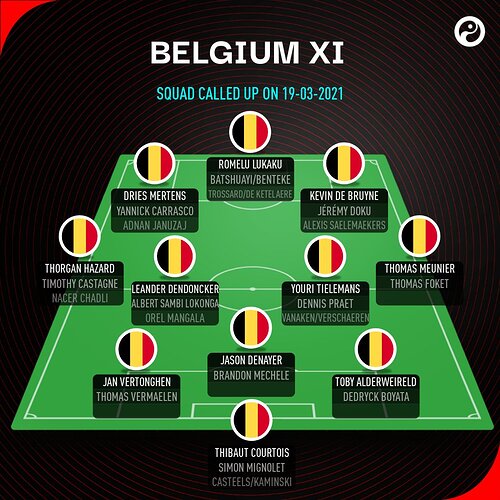 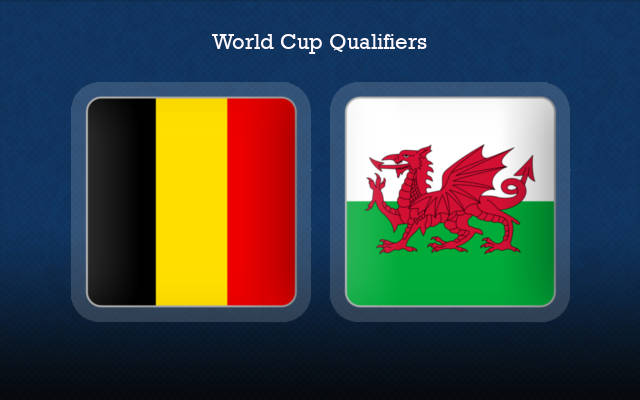 Belgium are coming off a memorable 2020, when they lost just one of the eight games they played all year. That defeat to England did not stop them from topping Group 2 in the UEFA Nations League A, with the finals set to be played later this year. As far as the FIFA World Cup 2022 Qualifiers are concerned, the Red Devils are the odds on favourites to top Group E and book their place in next year’s tournament.

Wales, on the other hand, are not fancied to top their group but are expected to finish runners-up and progress to the qualifying play-offs. 2020 was a solid year for the Dragons, who only lost the friendly to England in October, winning five of the remaining seven games to continue their resurgence under Ryan Giggs while also earning promotion to UEFA Nations League A for the next edition.

Wales were 3-1 victors the last time they locked horns with Belgium, back in the 2016 UEFA Euro.

Belgium have found the back of the net in each of their last 23 games in all competitions since falling to a 1-0 defeat to France in the 2018 FIFA World Cup final. 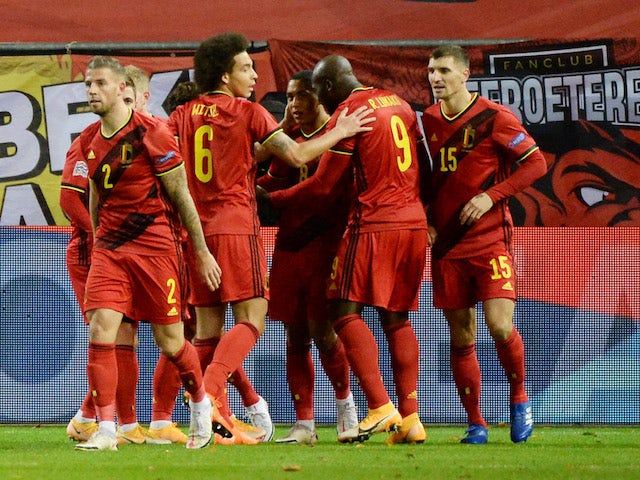 Wales have not been beaten in any of their last 11 competitive fixtures, dating back to June 2019 (W8 D3). 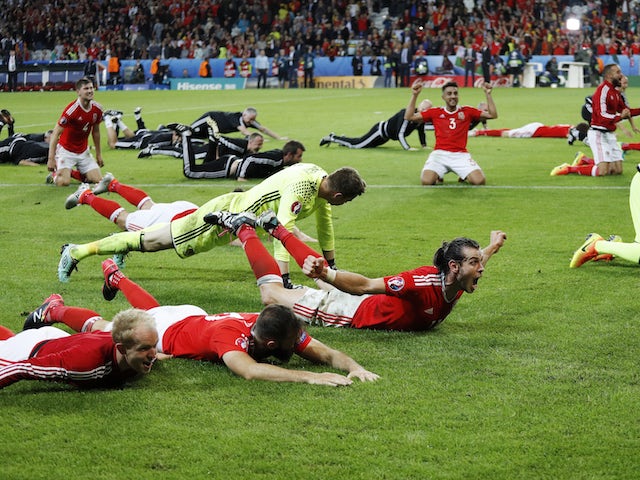 Rob Page is yet to oversee a defeat since taking over temporarily in the absence of Ryan Giggs (W2 D1), with Wales conceding just one goal in those games. 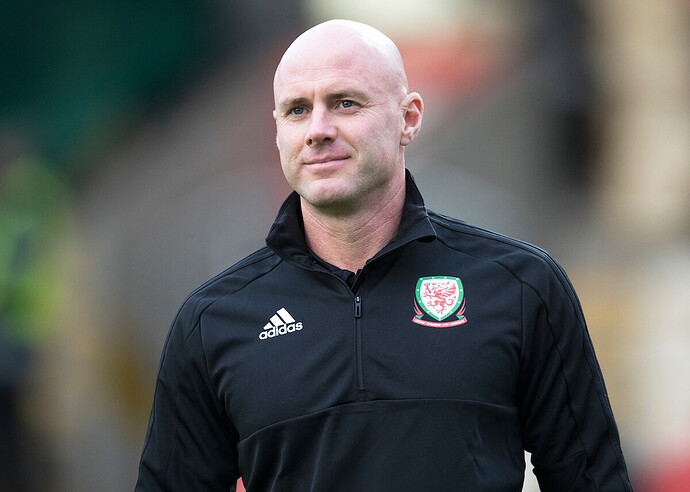 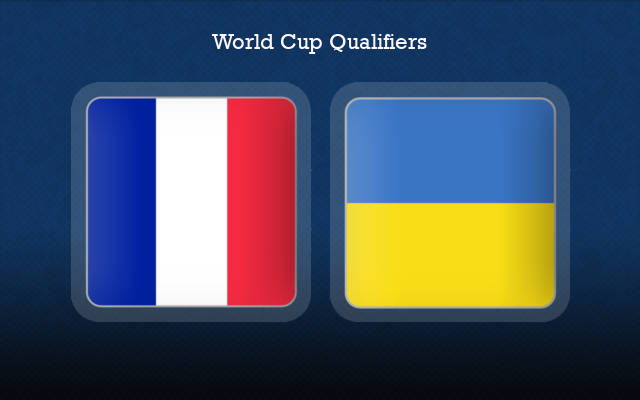 France go into the qualifying campaign as the favourites to emerge as group winners. And they will be aiming to live up to that tag this week, by building upon their victories against Portugal and Sweden in the UEFA Nations League last November.

Ukraine, meanwhile, are without a win since their shock 1-0 triumph over Spain last October. Following that match, Andriy Shevchenko’s men have fallen to consecutive defeats to Poland (friendly), Germany and Switzerland with the latter two coming in the UEFA Nations League. They will be hoping to put up a strong fight and come away with at least a point against the Les Bleus.

The last time these two teams met was in October 2020, when a ruthless France side thrashed an injury and COVID-hit Ukraine outfit 7-1 at the very same venue where they will battle on Wednesday.

Ousmane Dembele has been recalled to the squad for the first time since 2019, with Dayot Upamecano, Corentin Tolisso, Houssem Aouar, Eduardo Camavinga, Nabil Fekir and Marcus Thuram among the notable absentees from a star-studded selection.

Serhiy Bolbat, Taras Stepanenko, Artem Besedin and Viktor Tsyhankov are all absent due to injury, while Ihor Kharatin and Viktor Korniyenko are unable to join up with the squad due to COVID-19. 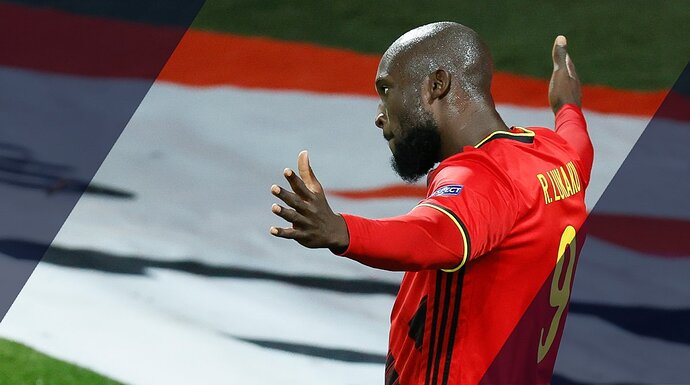 This will be the 11th meeting between France and Ukraine. Six out of the previous ten encounters have been won by France while Ukraine have picked up just one win (D3). 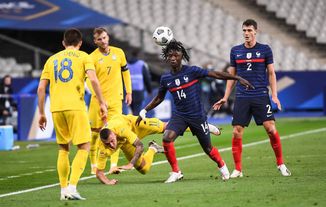 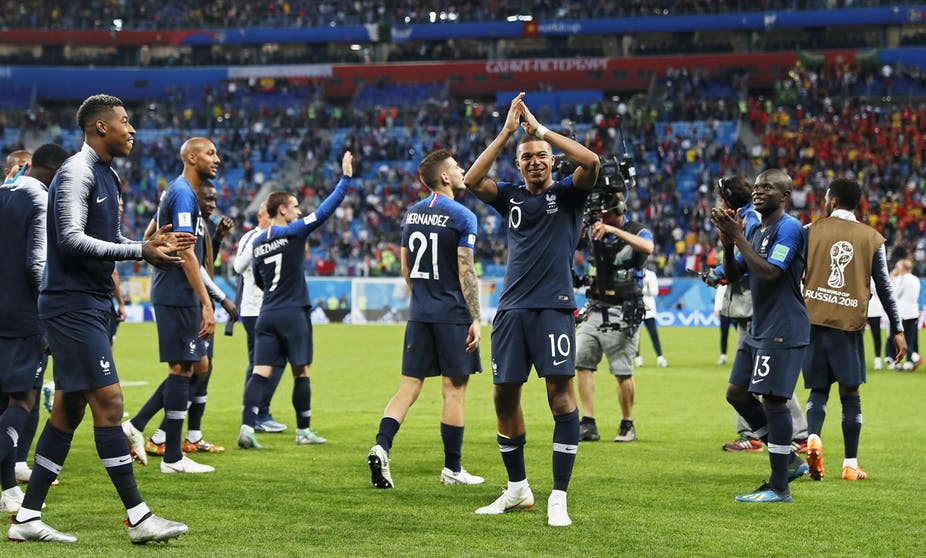 Ukraine have won just two of their eight matches in the last year, losing the remaining six, although the wins did come against strong opposition in Switzerland and Spain. 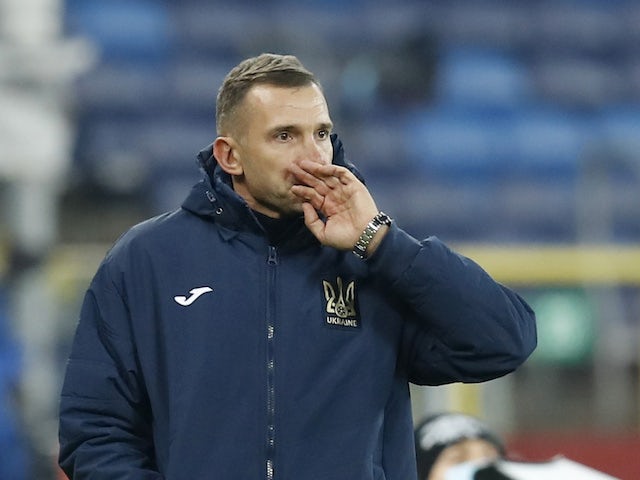 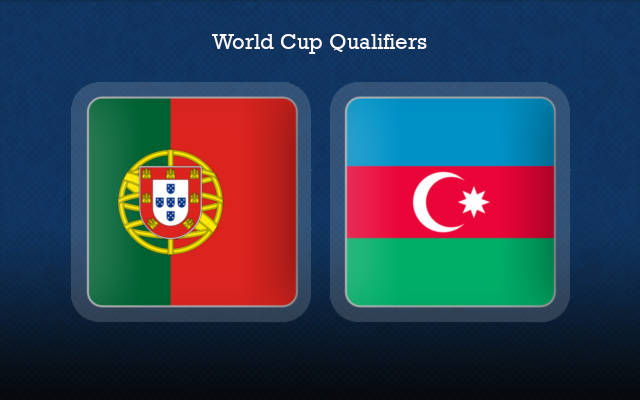 Reigning champions of the Euros 2016 Portugal will kickstart the qualifying campaign for the upcoming 2022 FIFA World Cup on Wednesday, as they take on Azerbaijan at the Allianz Stadium in Turin.

The Covid-19 restrictions in respective countries have forced the authorities to move the game to Italy, with Portuguese captain Cristiano Ronaldo playing a crucial role in advocating for the venue that usually serves as the home stadium for his club Juventus.

Starting on a positive note could be critical for Portugal, who have been drawn in Group A that includes potentially tricky and strong opponents like Serbia and the Republic of Ireland. It also has Luxembourg although they serve as the minnows of this particular group, where finishing first will lead to a direct entry into the main stage of the World Cup.

It is a prize Azerbaijan will certainly be looking for, although it is going to be a humongous task for them to overcome the challenges of footballing giants like Portugal, Ireland and Serbia. On Wednesday, they could potentially have the opportunity to make a statement by sealing at least a point against Ronaldo’s men and draw an early blow in this first international break of 2021.

Azerbaijan are goalless in their last four matches in all competitions. Their last goal came in the 1-0 win over Cyprus with captain Maksim Medvedev scoring the winner. 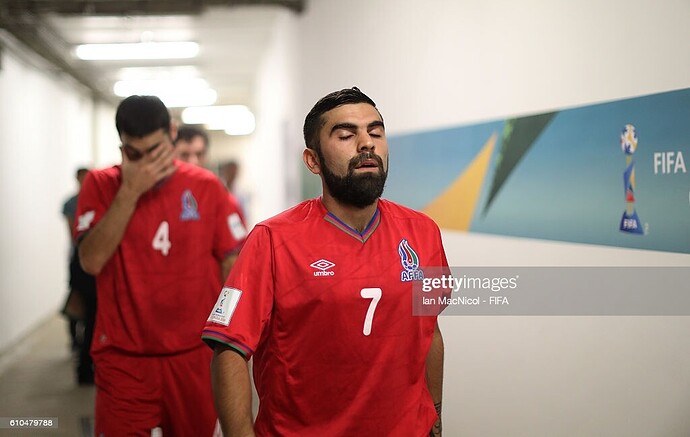 Portugal have secured four wins in six matches, although both the failed attempts came against France, in the UEFA Nations League. 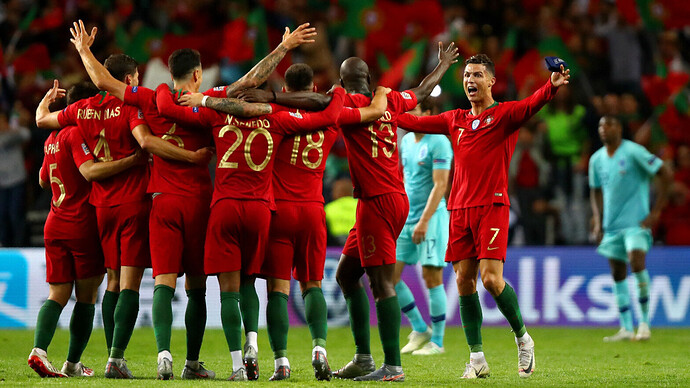