Matchweek 16 began on Friday Night with Brentford knocking horns with Watford. A late winner secured all three points for Brentford.

The games continue to come thick and fast across Europe, and Gameweek 16 of the 2021/22 Premier League season will kick off this weekend. The action on Saturday will get underway at the Etihad, with Manchester City playing hosts to Wolverhampton Wanderers in the lunchtime match.

Chelsea, Manchester United, Liverpool and Arsenal will also be in action in what promises to be an exciting weekend of Premier League Football.

How things are looking as we head into Matchweek 16 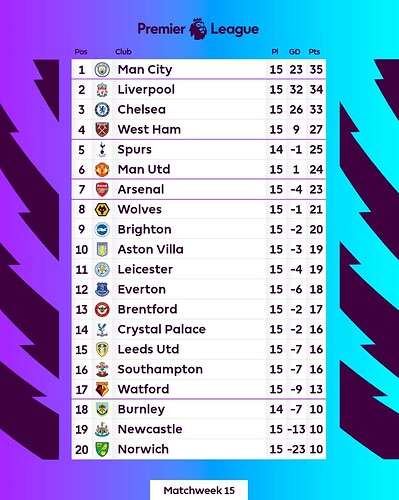 In this thread, we shall be covering all Matchweek 16 fixtures between 11th and 12th of December. Join the discussion and share your views on the various matches

huge fixtures to get stuck into on Saturday 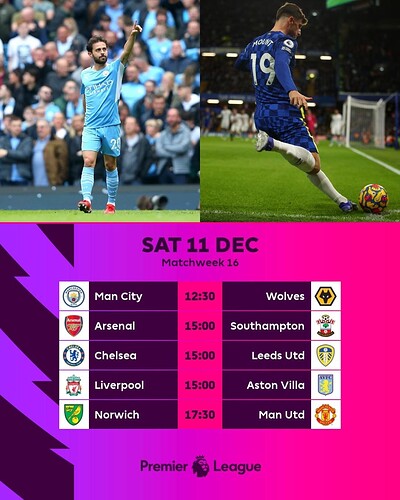 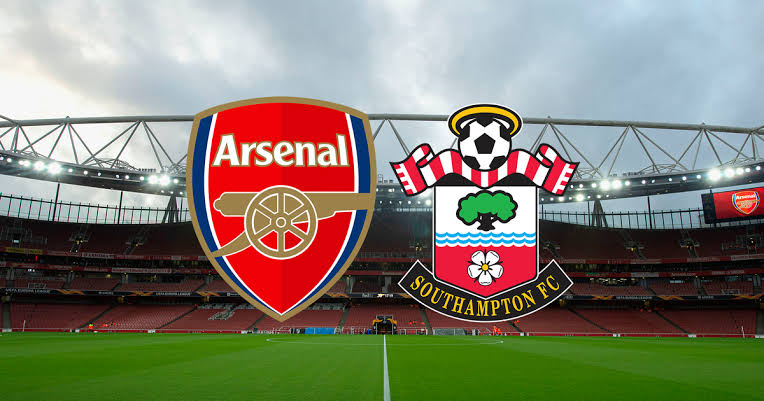 Arsenal are currently in the 7th spot and could reclaim the 5th place if Manchester United falter against Norwich City, as Tottenham are not in contention this week. However, the major concern will be their recent form, as the Everton defeat raised a few questions regarding the team’s mentality.

The Gunners lost both previous games after initially taking the lead, and against Everton, they were outclassed in the last ten minutes at Goodison Park. Mikel Arteta will hope the result was just a blip and aim to bounce back swiftly against Southampton. A win will be the bare minimum requirement from the manager as the race for the fourth spot picks up steam.

have had a few good results this season, although Ralph Hasenhuttl’s side are yet to hit consistent form. They are on a winless run of four games which could stretch further with a defeat at the Emirates, where they haven’t beaten Arsenal in 26 games.

The Saints are in real danger of being considered among those in a relegation battle. Despite their six-point advantage over 18th-placed Burnley, a defeat on Saturday will bring them closer to the danger zone and put tremendous pressure on Hasenhuttl.

With Granit Xhaka returning to the side for the Everton game, it will be interesting to see how Arteta sets out his midfield. Ainsley Maitland-Niles has not played since impressing against Watford and, with Thomas Partey himself admitting he’s not been good enough, could potentially come back into the side.

Other than that, Arsenal have a clean bill of health and they will be buoyed by the fact Gabriel Martinelli is fit.

In their top-flight history, only against Fulham (27 since 1949) and Manchester City (27 between 1976 and 2012) have Arsenal had a longer unbeaten home run than their current run of 26 against Southampton. 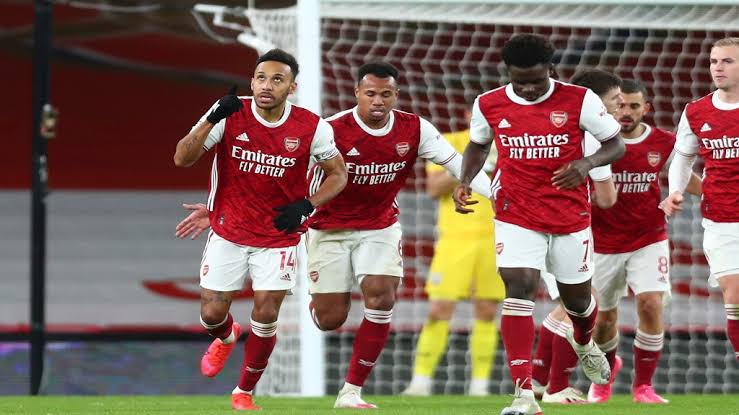 Southampton have lost 14 away Premier League matches in 2021, their most away league defeats in a single year since 2004, when they lost 15. 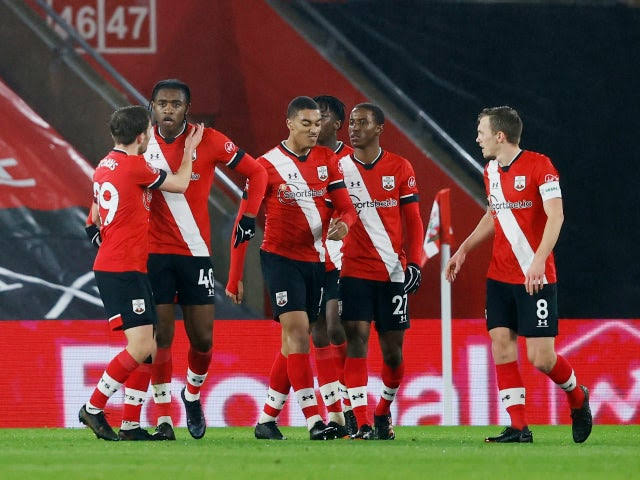 Southampton have conceded 47 away Premier League goals in 2021, the joint-most by a team in a year in Premier League history (also Sheffield Wednesday in 1997, Bolton Wanderers in 2007 and Wigan Athletic in 2009). The last top-flight side to concede more in a year was Luton Town in 1991 (49) while the last side to ship 50 was both Watford and West Brom in 1985. 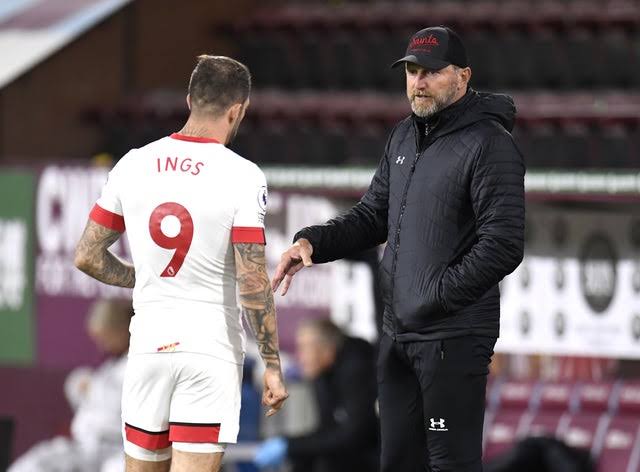 Arsenal’s Martin Ødegaard has scored in each of his last two Premier League appearances although ended on the losing side in each game against Man Utd and Everton. Only four players in Premier League history have scored in three in a row and lost each time, most recently Michail Antonio for West Ham in August/September 2016. The last Gunners player to score in three league games in a row and lose all three was Malcolm Macdonald in March 1977. 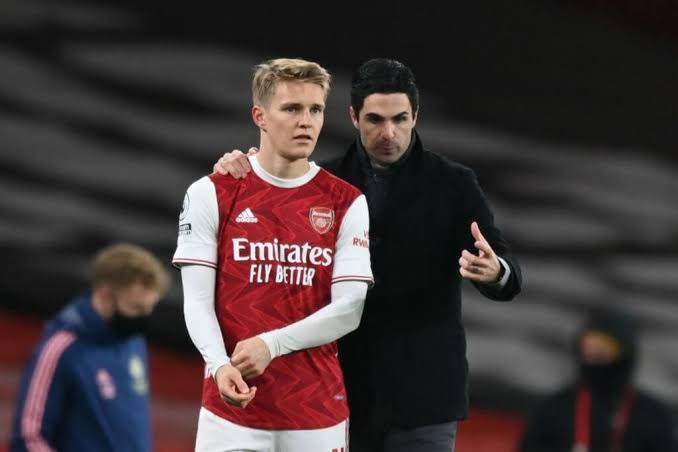 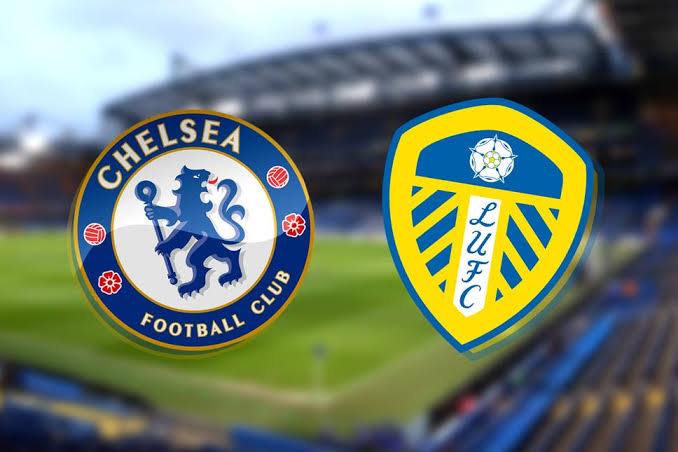 The reigning European champions are coming off the back of a shock 3-3 Champions League draw with Zenit St. Petersburg in midweek. It saw them lose top position in Group H to Juventus.

It was the second game in a row that Thomas Tuchel’s side failed to win, having also lost 3-2 to West Ham last weekend.

The defeat, only their second of the top-flight campaign, condemned the side to third in the standings. Liverpool and Manchester City have since stolen a march over them with victories in their respective games.

The Blues are now hoping to return to winning ways here against minnows Leeds United.

Leeds are languishing in 15th place in the table with just 16 points from 15 games. The Peacocks have been a pale shadow of their rip-roaring selves that took the league by storm upon their top-flight return last season.

Chelsea are light on numbers in midfield with Mateo Kovacic having tested positive for Covid-19 just a day after returning to full training following an eight-match layoff with a hamstring injury.

Jorginho missed the draw against Zenit with back pain, while Tuchel does not know when N’Golo Kante will be ready to return from a knee injury and Ruben Loftus-Cheek was injured during the warm-up in Russia.

Ben Chilwell (knee) is a long-term absentee, while Trevoh Chalobah has been sidelined of late with a hamstring injury.

Chelsea have won their last four home league games against Leeds - they’ve never won five in a row against them at Stamford Bridge. 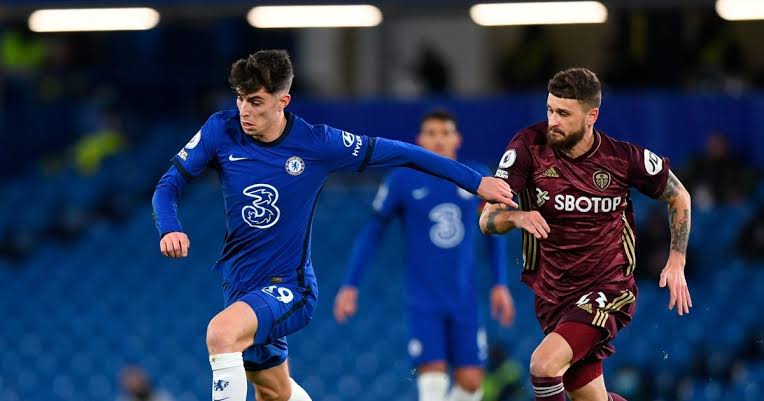 Leeds are winless in their last six meetings with Chelsea in all competitions (D2 L4), since a 2-0 home win in December 2002. 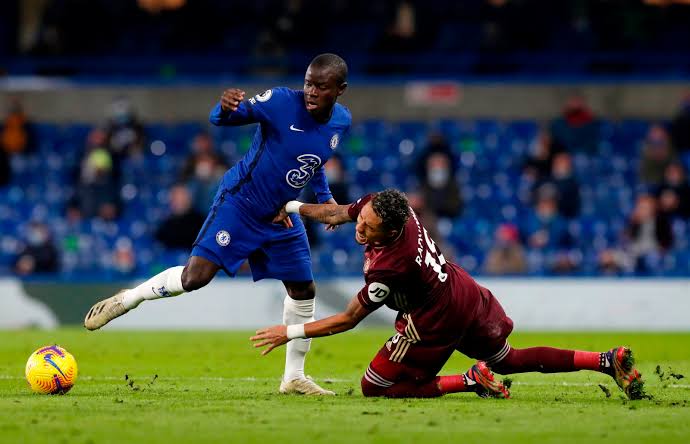 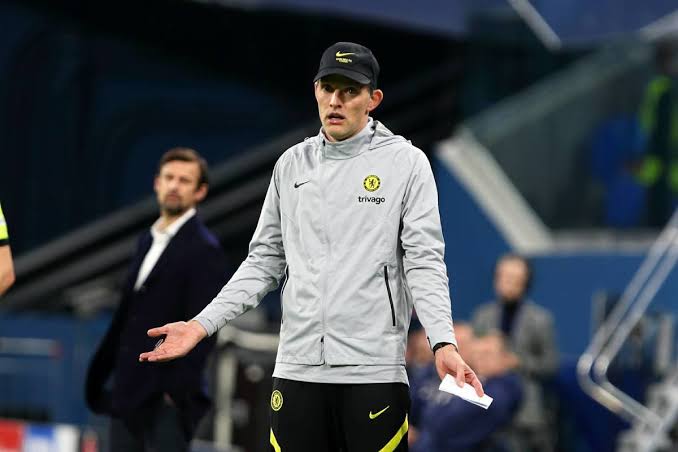 Leeds have won just two of their last 32 away matches in London in all competitions (D7 L23) and have lost two of their last three games when scoring first in the capital: against Chelsea last December and Spurs in November (won 2-1 in the other vs Fulham). 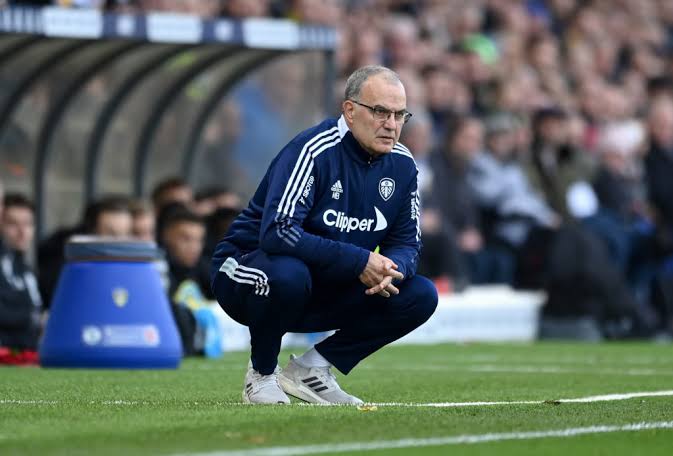 Both Chelsea and Leeds have scored a joint league-high three goals in the 90th minute of Premier League games this season; Chelsea’s three have put the gloss on already won games for them, while Leeds’ three have either been winning (1) or equalising (2) strikes. 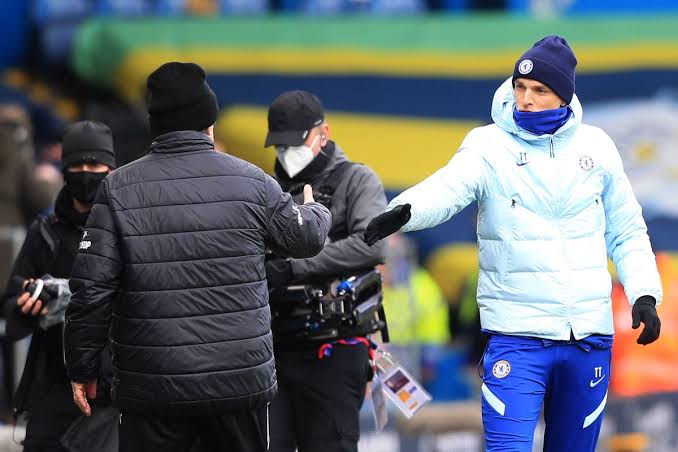 Mason Mount has both scored and assisted a goal in three of his last four Premier League starts for Chelsea, with the English midfielder scoring five and assisting three in these games. Mount has the most league goals (9) and assists (6) of any Chelsea player under Thomas Tuchel. 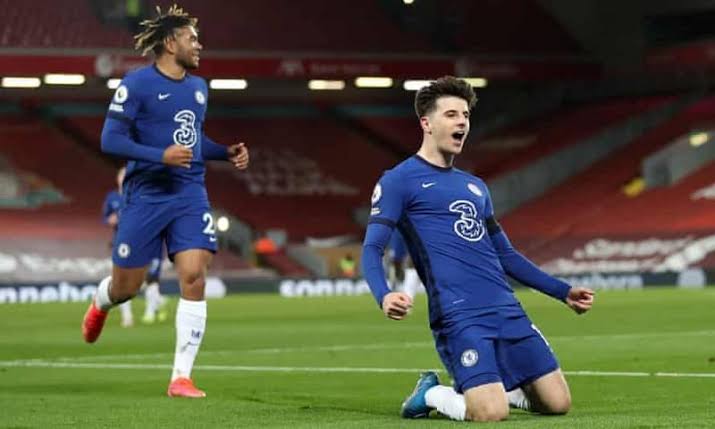 Raphinha has scored six of Leeds’ 15 Premier League goals this season, with no other player at the club netting more than twice so far this term. His six goals have been worth seven points to the Whites, with only Jamie Vardy’s strikes being more valuable to his side this season (8). 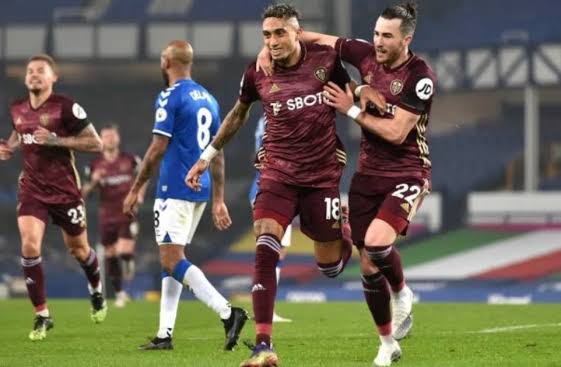 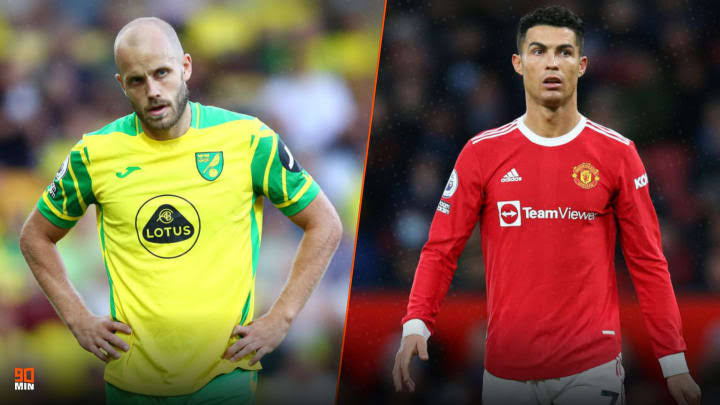 Norwich City started the 2021/22 season in disastrous fashion, with their first win of the campaign coming in Daniel Farke’s last match in charge. Dean Smith has since replaced Farke at the helm at the club and has positively influenced the players. The Canaries have lost only one of the four games overseen by Smith, with that defeat coming last weekend against Tottenham Hotspur.

On the other hand, Manchester United’s form has been on an upswing since the departure of Ole Gunnar Solskjaer. The Red Devils have won three and drawn two of their five games in this period, with interim boss Ralf Rangnick taking charge of the last two fixtures. Most recently, Young Boys held his men to a 1-1 draw, a fair result in a game played by youngsters and second-string players.

Aaron Wan-Bissaka picked up an injury in the draw with Young Boys while Mason Greenwood has impressed during Rangnick’s two games so far.

Paul Pogba is still injured, along with Anthony Martial and the game is likely to come too early for Raphael Varane and Edinson Cavani.

Norwich head coach Dean Smith has concerns over the availability of four unnamed players because of a combination of injuries and Covid.

Loanee Brandon Williams is ineligible to face his parent club but Todd Cantwell is fit and available.