The 2020 French Open qualifying round begins tomorrow Monday Sep 21 after the tournament was delayed from its usual June time frame due to COVID19 Pandemic. The main draw will air starting Sunday, Sep 27 through Sunday, Oct 11. 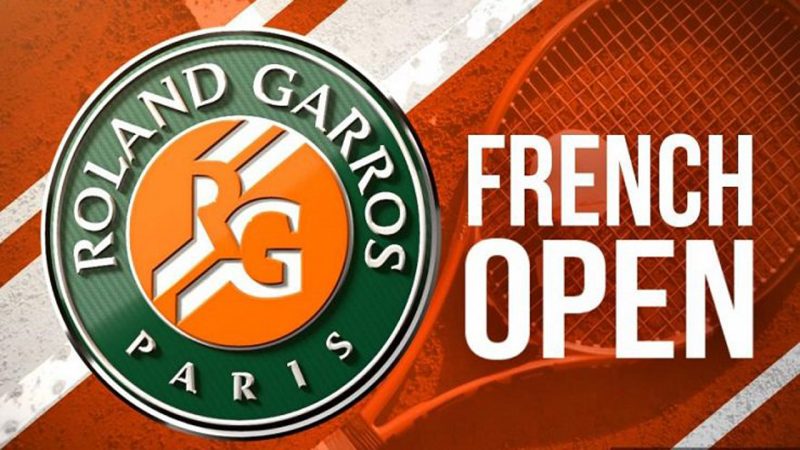 The tournament will be headlined by Rafael Nadal and Novak Djokovic on the men’s side and Simona Halep and Serena Williams on the women’s side.

Nadal will be going for a record 13th French Open and his 20th Grand Slam, which would tie him with Federer for all-time major titles. Djokovic will be coming off a stunning disqualification in the U.S. Open as he eyes for his 18th Grand Slam. Meanwhile, Federer will not be playing at the 2020 French Open, as he recovers from knee injury.

U.S. Open winner Dominic Thiem will try for back-to-back Grand Slam win. Veteran Andy Murray has received a French Open wild card and will hope for a comeback in tennis.

On the women’s side, Serena Williams will try once again to tie Margaret Court’s record of 24 Grand Slams, after falling short at the U.S. Open. While top seed Simona Halep will look for her 3rd major.

World No. 1 Ashleigh Barty will again not be playing due to coronavirus concerns. Meanwhile U.S. Open winner Naomi Osaka withdrew from French Open due to a hamstring injury.

Despite the rise in cases in Paris, French open will allow fans in the stands. Earlier, the organizers allowed up to a combined 11,500 fans on the three main courts. They changed those guidelines recently, limiting the number to 5,000 and only on Court Philippe Chatrier.

Let’s share the Grand Slam updates on this thread.

Major blow before the tournament

The FFT is planning to allow 5,000 spectators per day following a recent spike in COVID-19 cases in the country. It had previously said the clay-court major would permit a maximum of 11,500 fans per day. 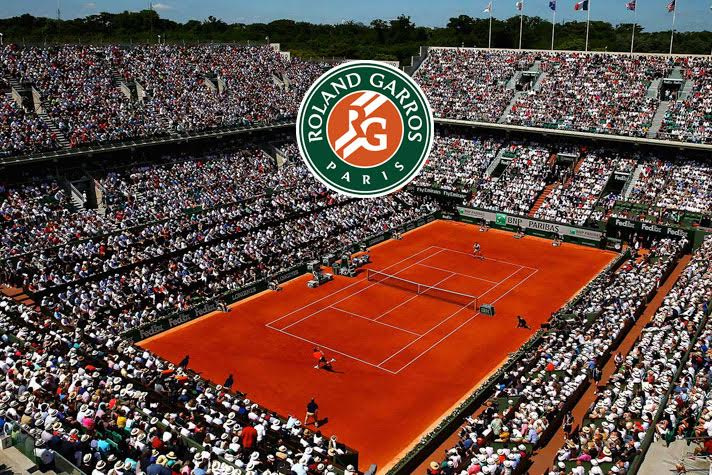 AQ French Open following US Open! Take some time to adjust to it. Normally with US GS ends for the year.

Bianca Andreescu pulls out of tournament

World #7 Andreescu has joined Naomi Osaka and Ashleigh Barty in the list of women’s players who have pulled out of French Open 2020.

“I have come to the difficult decision to skip the clay court swing this year and will be taking the remainder of the season off to focus on my health and training,” the Canadian said.

The 20-year-old further said she is looking forward to the next year’s Tokyo Olympics and wants to utilise the time in improving her game. 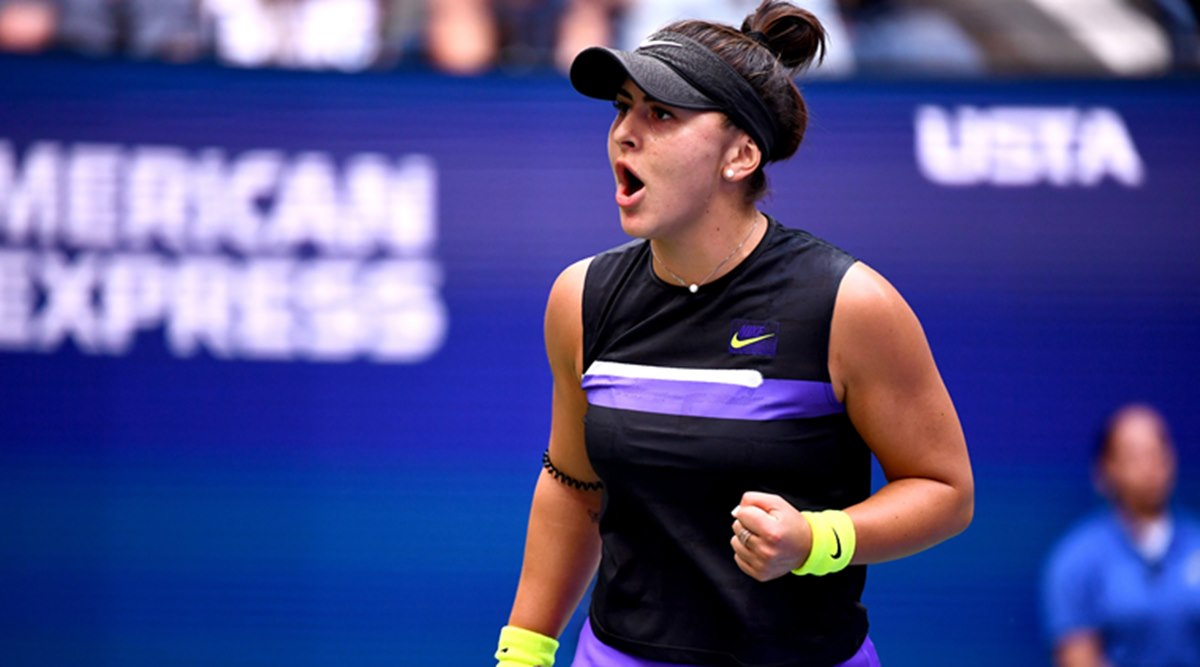 Nadal will return to the Roland Garros with a chance to equal Roger Federer’s record of 20 Grand Slam titles. Nadal is a 12-time champion at the clay-court major and boasts a 93-2 tournament record, starting with his title run on his 2005 debut as a teenager.

Although despite having a top notch record on clay Nadal failed to deliver at the recently concluded ATP masters in Rome. An upset by Schwartzman in the semi final led to Djokovic winning the tournament.

The 2020 Roland Garros will feature all the top 10 players except Roger Federer.

Nadal the most successful singles player - male or female - at a single Grand Slam! 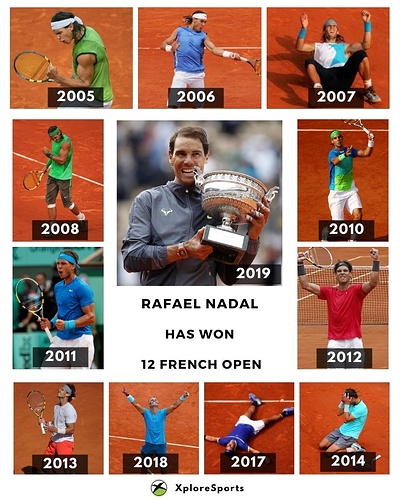 Corentin Moutet and Lorenzo Giustino faced each other in Round 1 of the French Open. They created history by making it the second longest match in Roland Garros history. The match lasted for 6 hours and 5 minutes.

A total of 459 points was won by both the players collectively, Guistino defeated the Frenchman 0-6, 7-6, 7-6, 2-6, and 18-16. It was also the first Grand Slam win for the Italian player Guistino. The fifth set scoreline was 18-16, a record for French Open’s red clay. It was almost as if nobody will give up at any point. Surprisingly, Giustino won only 34 games as compared to Moutet’s 40 but still ended on the winning side. 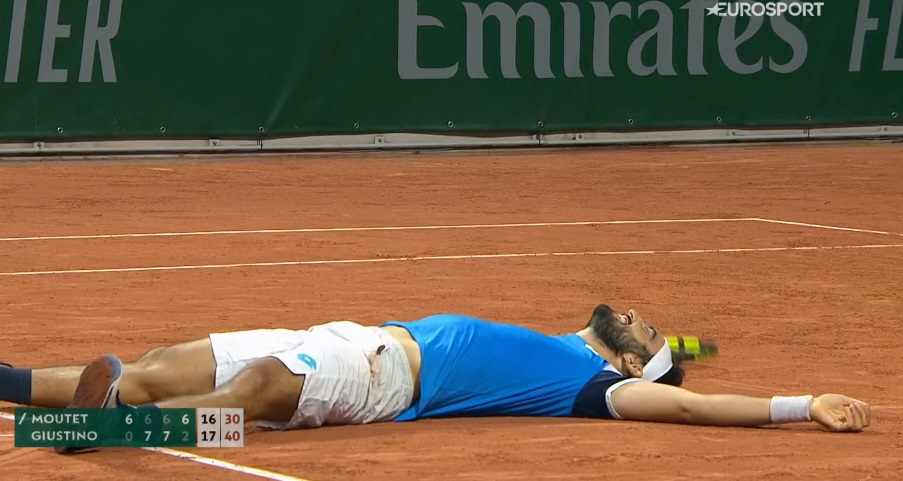 Russian Daniil Medvedev, a runner-up at the 2019 U.S. Open and semi-finalist in New York this year, was knocked out from the first round of the French Open for the 4th successive year. Medvedev lost to Hungary’s Marton Fucsovics 6-4 7-6(3) 2-6 6-1.

Serena William’s will have to wait for her 24th Grand Slam title after an Achilles tendon injury has forced her to withdraw from the ongoing French Open. 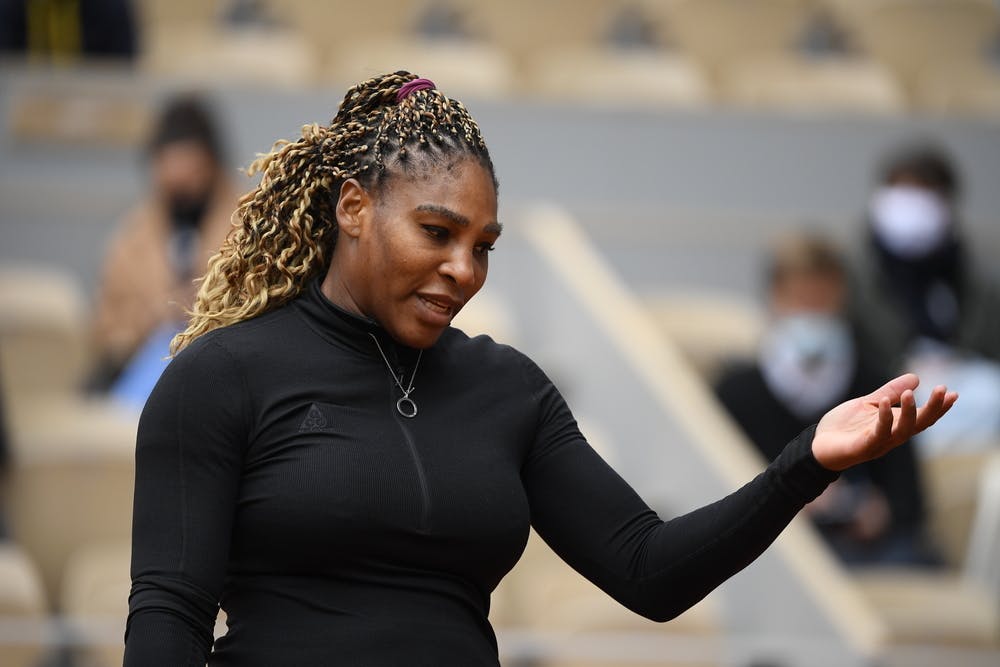 Top seeded Djokovic advances to last 16 for the 11th straight year after a straight set win 6-0 6-3 6-2 over Colombian Daniel Galan.
He will be up against Russian Karen Khachanov in the fourth round of the French Open on Monday, October 5. 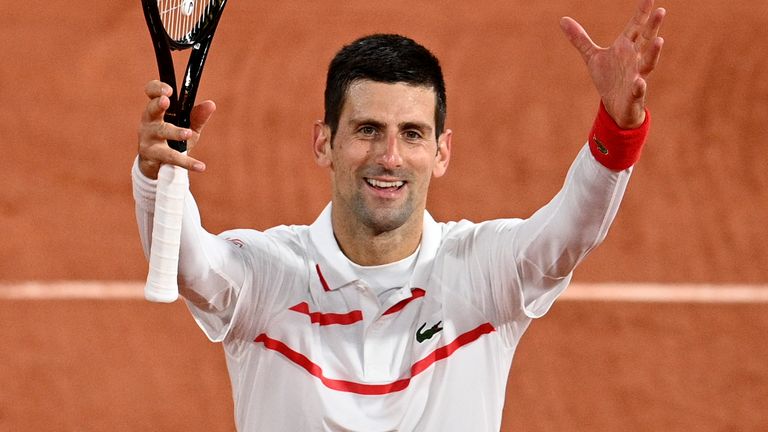 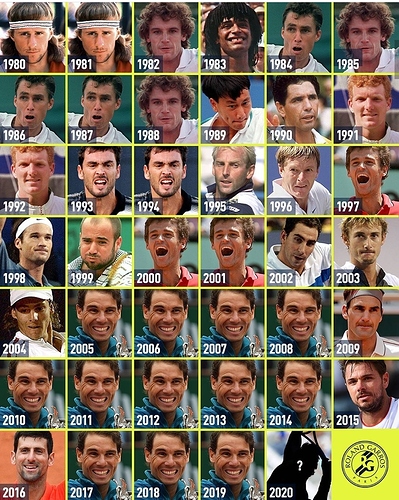 Champions who have been crowned multiple times! 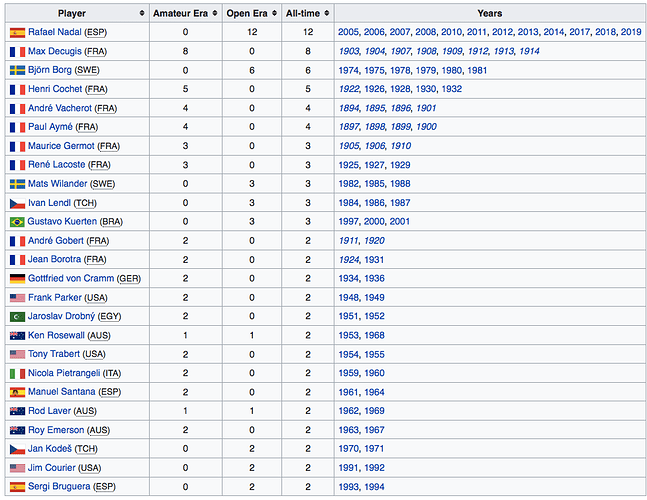 Nadal will next face Jannik Sinner. 19-year-old Sinner, ranked 75, put in a superb performance to beat the US Open finalist Alexander Zverev in another 4th round match today.
Sinner, 19, is the youngest to have made the last-eight of a Grand Slam tournament in 14 years.

While Schwartzman continued his stealthy progress as he eases into the quarter-finals with a 6-1 6-3 6-4 victory over Italian Lorenzo Sonego.

Swiatek bounced Halep, the top seed, in straight sets 6-1, 6-2 in the fourth round to deliver the biggest surprise so far in a women’s draw.

3rd Seeded Svitolina, Podoroska and Trevisan advance to the Quarter-finals.

Swiatek will face Trevisan while Svitolina will face Padoroska in quarter-finals on Tuesday, 6th Oct.

But, I guess Djoker would upstage him this year! What do you guys say? 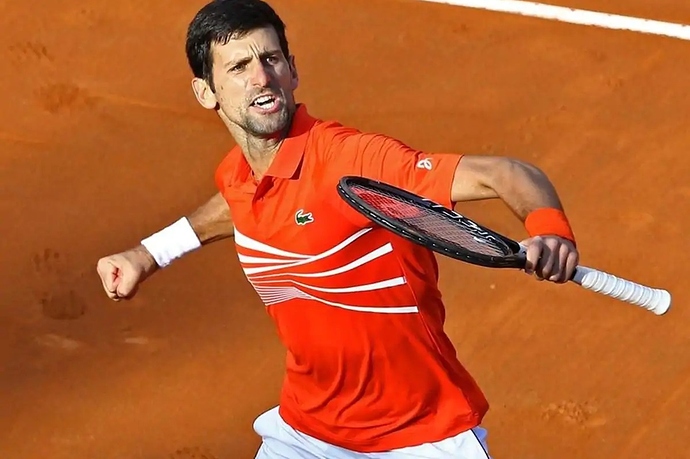 Rafael Nadal has reached his 13th Roland Garros semi-final with a straight-sets win over Italian teenager Jannik Sinner. Nadal defeated 19-year-old Sinner 7-6 (7/4), 6-4, 6-1 to clinch a 98th victory in his 100th match at the French Open. He will next face Diego Schwartzman over whom he holds a 9-1 career advantage, as he moves closer to equalling Roger Federer’s all-time record of 20 major grand slams. 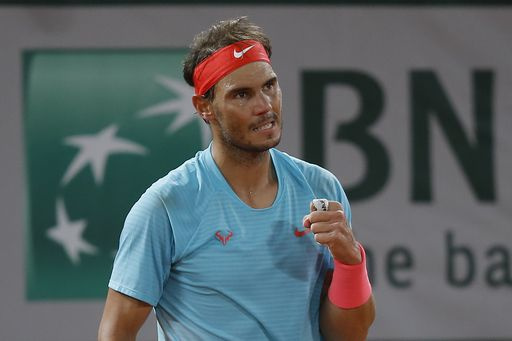 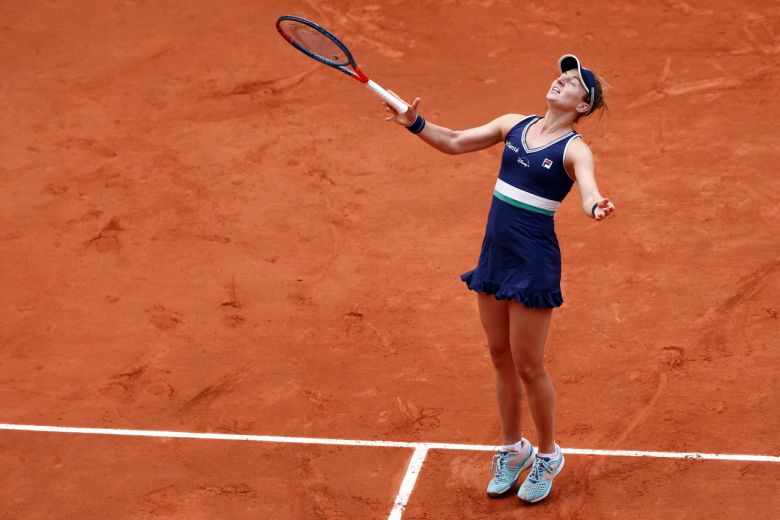 To make matter all the more sweeter, This is only her second main draw of a major tournament.

Both the semi-final matches will be played on Friday 9th Oct.

In the women’s singles semi-final event, Kvitova will face this year’s Australian Open champion Sofia Kenin for a place in a maiden French Open final.

Its the Men’s semi final tonight. The Champion of Clay, Rafael Nadal faces the Argentine Diego Schwartzman. Just about 2 weeks ago Nadal was blown out by Schwartzman in the ATP Rome Masters and he will look to avenge his defeat at Roland Garros. Nadal who is in the quest to equal Roger Federer`s 20 Grand Slam titles has only ever lost two matches at the claycourt major - to Robin Soderling and Novak Djokovic. If you look at the history between these two Nadal is 10-1 up and in his prime form as he has dropped only 34 games in the last 5 matches.

The other semi-final will see Novak Djokovic against Tsitsipas. Djokovic has been defeated in the past by Tsitsipas and he battled injury issues in his quarter-final match. Djokovic is chasing a second Roland Garros title and 18th Grand Slam to become the first man in half a century to win all four major Grand Slams twice. Tsitsipas, the Greek teenager has impressed with his attacking gameplay and big crunchy services.

Its going to be a battle between the favourites and the Underdogs. Who do you think will win?

Nadal vs Djokovic Finals, Nadal to win his 13th title.