A player like Lionel Messi is a rare and special type of player in the history of football. Few have lit up the pitch like the Argentine maestro, and unsurprisingly, the PSG forward has mostly played at the very highest level in football. At the top of the football pyramid, you are more likely to see more top level managers than anywhere else in the game. However, players like Messi did not appear in a vacuum and the Argentine had to work his way to the top from humble origins.

Despite playing under great managers like Pep Guardiola and Luis Enrique, Messi hasn’t always had the best management around his generational talent. The Argentine has sometimes had to shoulder the responsibility of carrying the team when the managers weren’t able to elevate the rest of the side to his level.

It is pretty rare and hard to notice because of how dominant the Argentine is in all his teams. Even at the worst of times, Messi has covered any tactical deficiencies in his teams. The maestro has also reached astronomical figures in nearly all of his professional seasons, regardless of the manager. Two Argentine maestros taking La Albiceleste to win World Cups, Copa Americas, and other competitions sounded like such a big, beautiful dream. However, the opposite happened, and Diego Maradona’s career as Lionel Messi’s Argentina coach was a rather disastrous situation. Much excitement about Maradona’s appointment to the national team was quickly trampled after Argentina shockingly lost 6-1 to Bolivia.

Messi notably struggled to score competitively for the national side throughout Maradona’s time as head coach. The star managed a shocking two goals from 2008 to 2010, although he scored twice as many in 2007 alone. In the 2010 World Cup, it became quite clear that Maradona was unfit to manage La Albiceleste. In the quarter-finals, Germany beat a confused Argentina side 4-0, which lead to Maradona’s eventual sack. After earning a good reputation as a manager with dexterity in the Argentine domestic league, Tata Martino made the move to Spain to manage Barcelona in 2013. His style of play with Newell’s Old Boys attracted the higher-ups at Camp Nou, but his one-year stint with the Bluagrana didn’t reach expectations. In Martino’s defense, Barcelona started off the season with brilliance and wins, but things went south sooner rather than later.

Although Messi played well under Tata Martino’s management, scoring 41 goals in 46 games was notably the star’s lowest goal output per season since 2008. However, the manager couldn’t get Barcelona to any trophies that season, apart from a Supercopa de Espana at the beginning of the campaign. Losing the league title to Atletico Madrid and crashing out of the Champions League, also thanks to Atletico, was too much for Blaugrana to bear. Martino was later sacked that season. As much as Ronald Koeman did his best to right the flailing ship that was Barcelona, Lionel Messi notably left the club under the Dutchman’s tenure. Koeman struggled to fix Barca’s problems on the field, but it was hardly going to be an easy task. When he entered after Quique Setien was sacked, the former defender had to deal with Messi’s transfer request, alongside a demoralized squad.

To be fair, Koeman did steady the club somewhat, eventually winning the Copa del Rey, but their financial doldrums pushed Barcelona into turbulent waters. The club were unable to keep Messi at Camp Nou, eventually letting him go on a free transfer. Koeman couldn’t string wins together, with the squad left in disarray after their beacon had left the team. It all culminated in the Dutchman’s sacking, with another club legend, Xavi Hernandez, taking over the reins.

The former Real Betis manager is regarded, by Blaugranes, as one of the worst managers in Barcelona’s expansive history. Managing the side from January to August 2020, Quique Setien took charge of only 25 games. The club notably fired him just three days after losing 8-2 to Bayern Munich in the Champions League quarter-finals, putting an end to a troubling managerial tenure. Barcelona notably ended the season without a single trophy, having been kicked out of the Copa del Rey by Athletic Bilbao, with Real Madrid winning La Liga. 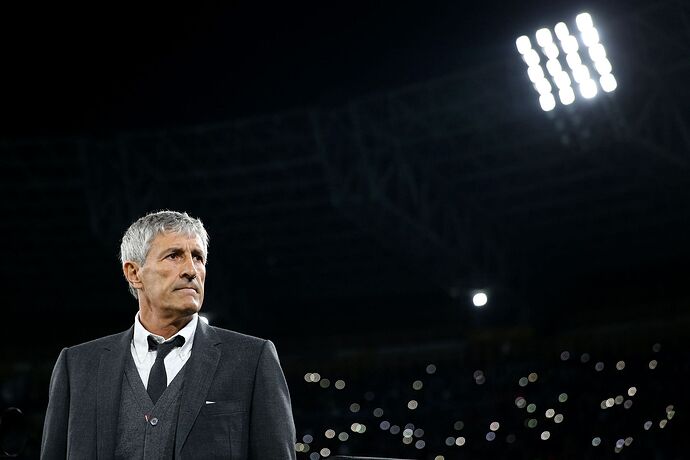