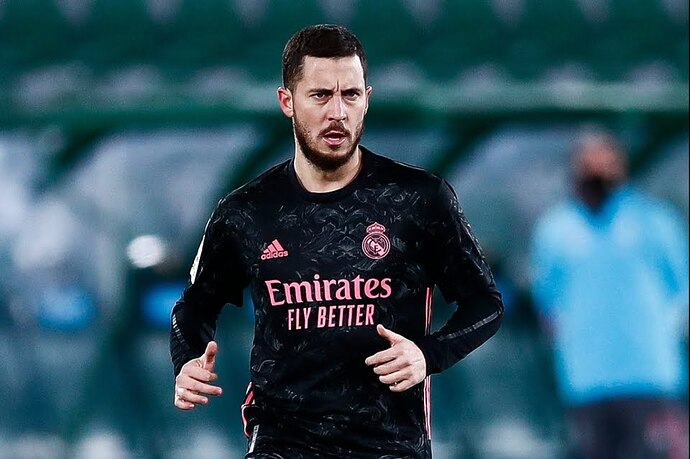 Eden Hazard has been sidelined with TEN different injuries since joining Real Madrid , including a fractured foot that saw him miss 17 matches from December to January last year. Over his 18 months at the Bernabeu, Hazard has played just 30 times and scored a mere three goals. Eden Hazard has missed a total of 38 games across all competitions since joining Real Madrid in 2019-20. A whole league season’s worth of games!

The injury troubles continue for Eden Hazard with Real Madrid confirming that he is set to be out for up to six weeks with a thigh problem.

Eden Hazard wanted to become the best player in the world by Joining Real Madrid, but seems to have somewhat slipped into obscurity. Where has it gone wrong for the Belgian?

His dream move has been a nightmare 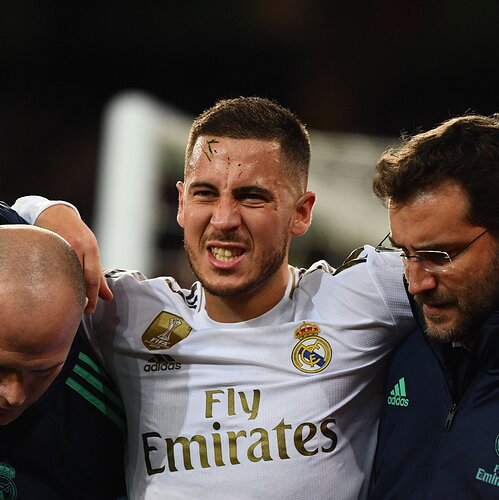 Since the beginning of the 2019/20 season, Eden Hazard has missed a total of 38 games since signing for Real Madrid…

Sometimes grass isn’t always greener on the other side. 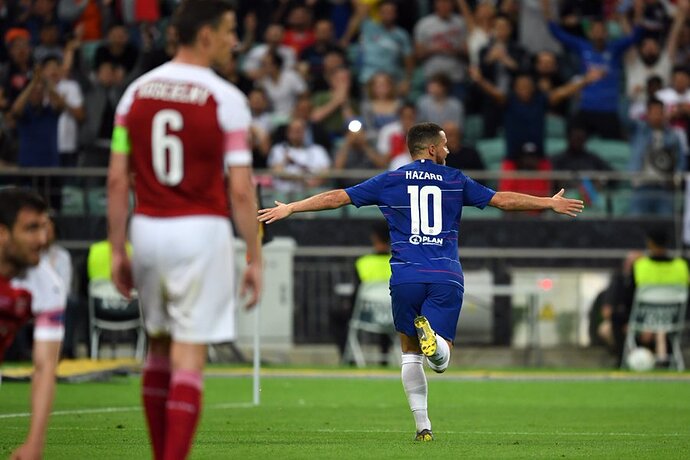 In total, Real Madrid’s big-money signing has missed a total of 282 days due to injury, leaving him unfit for 43 games in one and a half seasons. 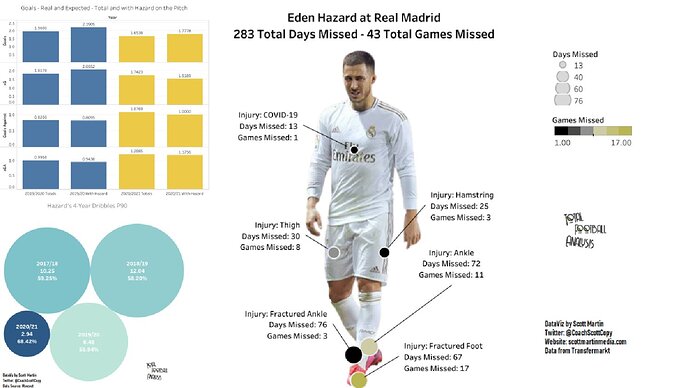 The injuries just don’t seem to be giving any relieve! 10 separate injuries / illness in 18 months at Madrid is beyond comprehension.

It is so sad to see this promising Belgian fade into oblivion!

Hope to see him recover from his injury and make a remarkable comeback to reclaim his glory days!

A peak into Hazard’s stupendous run at Chelsea! 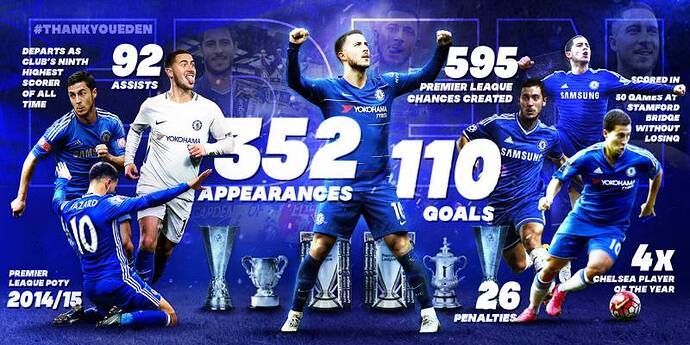 Hazard is simply not good enough - he never was.

I completely disagree with this. You’re being Sentimental here. Eden Hazard is a World class talent, on his own day, he can single handedly win games for his teams just as we’ve often seen him do at Chelsea and with his National team, Belgium. Man is just unlucky with injuries at Spain. It got nothing to do with the talent or quality in La Liga.

The game in England may appear to be played at a faster pace but I am not sure that the players are faster.

It lacks flow. Lots of stoppage as a result of poor passing. Often the passes went awry, or wrong footed the guy.

Passing is technically inferior and so is their dribbling.

Overuse of the long pass resulting in loss of possession. Juxtapose this with La Liga’s strategy of breaking down the opponent. In comparison, The Premiere League makes for a choppy game.

Mids don’t appear to be near as creative and appeared to be backs that happened to play higher on the pitch.

Players are stiff and mechanical.

Over a season, La Liga teams would break them down and dominate with their intricate passing and strong possession game. No amount of physicality would make up for the difference in pure skill.

By the way, even when Hazard has been uninjured, he has played in 8 matches and has a whopping 2 goals and 1 assist in 2020-2021. Raphael Varane, a defenceman who previous to 2021 has never scored more than 1 goal in a season has already scored as many goals as Hazard this year. The stats don’t lie.

The Ass we see at Real is not the same as the one we saw at Chelsea, a comparison in his statistics in the game but also in the market value he has at Real and the one he had at Chelsea show this

last year in Chelsea 150mil eur
this time in Real 50mil eur
reduction -33,33%
Eden Hazard was born on Jan. 7, 1991. He is currently 29 years old and plays as a Wide Man for Real Madrid in Spain. His overall rating 91 with a potential of 91. Hazard has got a 4-star skillmoves rating. He prefers to shoot with his right foot. His workrates are High / Medium. Hazard’s height is 175 cm cm and his weight is estimated at 74 kg kg according to our database. Currently, Eden Hazard is playing with numbers 10 and 7. His best stats are: Dribbling: 95, Agility: 95, Ball Control: 94, Acceleration: 94, Balance: 94. 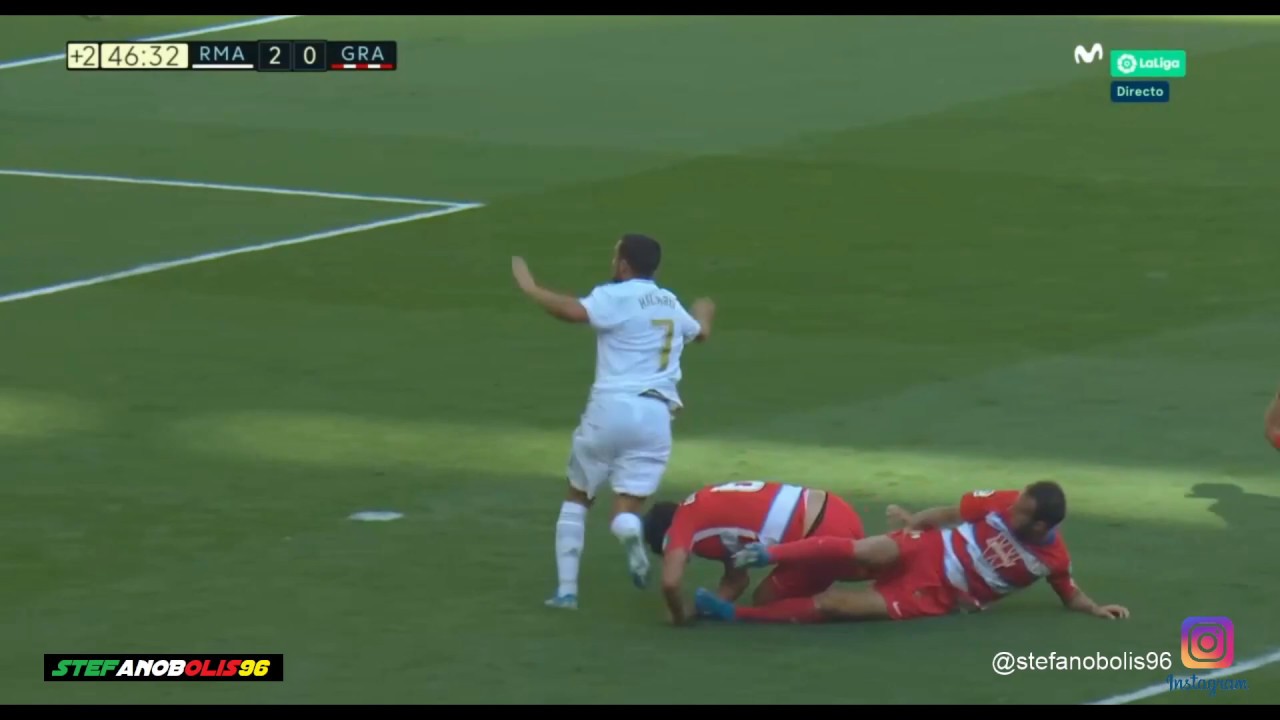 His stats bear out my initial post that he would do much better in the Premiere League because of the inferior talent of the players. I hope he goes back there real soon.

It is not a matter of inferior talent, the way of playing is different in Spain and different in England. AZAR fits due to technique in Spanish as well, but it did not adapt to Real.

inferior talent of the players.

The Premier League is probably one of the most difficult Leagues in the world due to its physicality requirement and Competitiveness. Players finds it more difficult to adapt there compared to other leagues. Eden Hazard bossed the Premier League with ease while he was there and would have done better in Spain if not for his constant injuries.

The Premier League is a bit more physical and pacier while La Liga is more of being Technical and patient in the build up’s. But then, Eden Hazard is one of the most technically gifted players around. He has an ability to move through defenders easily, create chances and score goals too. Surely, he has what it takes to thrive in La Liga.

With all due respect to your views about the competitiveness and playing styles of both the leagues, I think you are a bit hard on Hazard’s stint at Real Madrid.

Physical injuries can hamper the performance of players and we are talking about a player who has proven his exceptional ability in the last World Cup as well.

Belgium arguably played the best football at the 2018 World Cup and captain Eden Hazard finished the tournament as the highest WhoScored rated player (8.53).

Only Harry Kane and Antoine Griezmann (both 6) played a direct hand in more goals than Hazard (5), who was a constant threat for defences with his unbelievable close control and dribbling ability.

Hazard completed more dribbles than any other player at the 2018 World Cup (40), while also winning the most fouls (27). It’s so hard to stop Hazard at full speed that often the only way to get near him is to bring him down illegally.

Hazard wasn’t just world class in possession, but the Belgium forward was also superb without it. Hazard won possession in the attacking third on nine occasions at the 2018 World Cup, more than any other player. 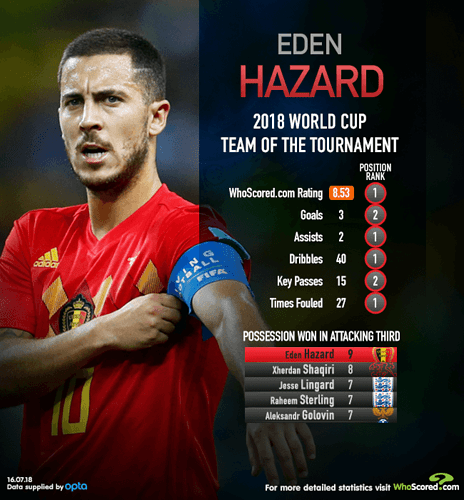 I stand by my argument that Laliga has the superior talent over the Premiere League. That to me is the only explanation why Hazard dominated while at Chelsea. One of the other posters said: “The Premier League is probably one of the most difficult Leagues in the world due to its physicality requirement and Competitiveness.” Physicality will never win out over pure skill. And competitiveness has never been a barometer for talent. The MLS in North America is considered competitive; surely no one is saying that this makes them as talented as the big boys in Spain. As for Hazard, if he gets it going in Laliga, I don’t have a problem admitting I was wrong. But from what I have seen, and I watch every game that Real Madrid plays (even when he was healthy) I don’t believe he has the skills to dominate in Laliga. He is just simply facing better players than he was in England.

Real Madrid is a big team with a huge history, the pressure that is also very big as well as the competition for a position in the top eleven may not be able to withstand the weight of this team

This is another reason that Hazard looks out of place in Laliga. The competition to get playing time on his own team is way more difficult than when he was with Chelsea. This will be exacerbated if Madrid signs Mbappe or Haaland. Another external pressure was that he was considered the replacement for Ronaldo. This is perhaps thee biggest flop in big signings in football. The other issue, is that even when Madrid tries to sell him - and they will - who’s going to buy him at anywhere close to his purchase price and his exorbitant salary. He is Gareth Bale 2.0.