After a dream run, the team was expected to reign season 2020-2021 as well. However things are not rosy this season. In the recent heavy weight clash against Manchester City, they lost 1-4 with significant ramifications for the title race.

For the first time in FIFTY-EIGHT years, Liverpool had lost three consecutive league games at Anfield.
After 23 games this season, Liverpool (40) now have 27 fewer points than they did at the same stage last season (67), the biggest drop by any reigning champion at this stage of a campaign in English top-flight history.

Liverpool Stats at the Half-Way Stage of Each Season 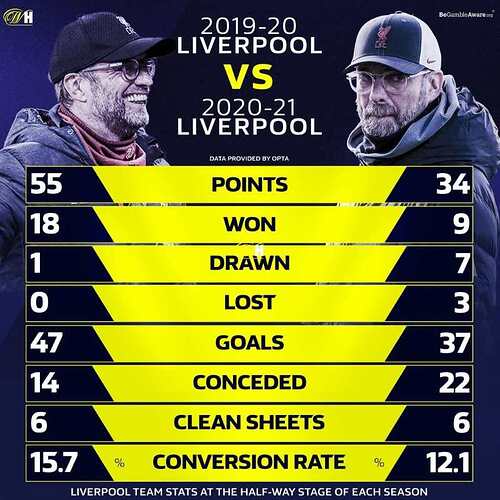 Can somebody explain to me what is wrong with Liverpool??

What has changed between last season & this season?

The hosts take the lead in a matter of minutes.

Bad times for Liverpool! I am yet to figure out this deteriorating state of Liverpool.

Maybe other teams have gotten competitive this season.

Maybe other teams have gotten competitive this season.

Not really! They’ve been knocked off their strides this season, and coupled with their injury crisis. Key players such as Virgil Van Dijk, Joel Matip and Diego Jota has all been out for a while now. But with the quality of players that are still available for Jurgen Klopp, one would expect them to win most of the matches they’ve failed to win so far.

Jurgen Klopp insisted on Monday he is ready for the challenge of turning his team around after a tough period both on and off the field.

“I can split things, I can switch off, one thing and the other thing, I don’t carry things around,” he added. “Of course we are influenced by things that happen around but nobody has to worry about me or whatever. I might not look (fine) because the weather is not cool, the beard gets more and more grey, I don’t sleep a lot, my eyes look like this, but I am full of energy.” 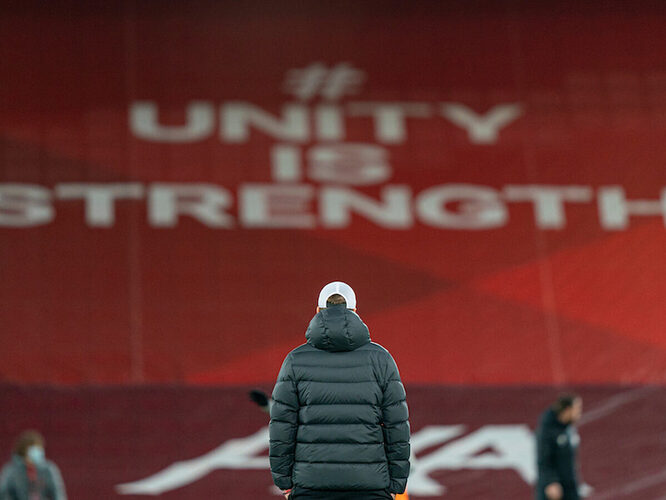 Liverpool captain Jordan Henderson said Klopp comes into his own in periods of adversity.

"He is always there for us and tries to protect us the most but as players we take full responsibility,” Henderson said.

“There are no question marks over the manager and how he reacts after games. He handles situations like that really well and that is why we want to go out there and put in a performance.”

I personally feel this is just a test of time for Liverpool and Jurgen Klopp, I think they were badly affected by injuries to key players especially Van Dijk and new recruit Diego Jota because he was really on fire for them before the injury but I still don’t think that’s the major reason why Liverpool are failing right now as I think the major reason they’re failing is due to the fact that they aren’t getting the best out of their top performers in the last two seasons, Robertson and Alexander Arnold performance has dropped drastically and so is Sallah, Mane and Firminho too with Sallah going like 5 games without a goal and Mane also going like 8 games without scoring too, in fact the trio has 30 goals between them with Sallah getting half of those goals with 17 while Mane has 7 and Firminho 6 while this might look impressive, its not good enough for the standard Liverpool has set for themselves, it’s not as if Liverpool are conceding too much even though they conceded 7 in their last two games to City and Leicester but their major problem is scoring enough goals to win games like they did last season when their attackers were constantly a threat to any opposition and banging in the goals and also Thiago hasn’t been able to offer them as much as Henderson used to do in the middle of the park and drifting him back as cover for Center Back position has also affected them but all in all, I feel for Liverpool to stand any chance of making the top 4 this season, they need to get their attackers as fearless as they used to be.

Sir Alex Ferguson- insight into why Liverpool are struggling this season

Liverpool’s woes this season have come through a number of key injuries, with Virgil van Dijk, Joe Gomez and Joel Matip all out for the season.

As well as their defence being sidelined, other important members of the squad have been plagued by injuries too.

Fabinho, Jordan Henderson, Alisson, Diogo Jota and Trent Alexander-Arnold have all faced spells out of the side.

It has seen their title defence fall apart and the Reds now face a battle to stay in the top four.

With Manchester City 19 points ahead of them, Liverpool’s chances of retaining their crown are virtually zero.

Instead, Jurgen Klopp must get his side back in form with them sitting sixth in the table - five points behind fourth-placed West Ham.

Former United boss Ferguson had similar issues with injuries back in 2012 during what is now remembered as one of the most dramatic title chases in the history of English football.

The Red Devils suffered more problems in the physio room than any other side that year in the Premier League, losing a collected 1681 days to injuries.

All in all, United had 39 significant injuries whereas Manchester City had the least with seven.

At the time, Ferguson said: "There have been some changes in the team from the one that started the season.

"You don’t envisage having quite so many injuries.

"It doesn’t disrupt us to a great degree but it does unsettle the balance of the team.

“Sometimes we are having to rethink which team to play whereas when the team is in full flow you don’t need to worry.”

However, as everyone now knows - United went on to lose that title race, which went down to the last second on the final day as Sergio Aguero scored the winner against QPR - yet, Liverpool would probably chomp your hand off if they could run Pep Guardiola’s men that close right now. 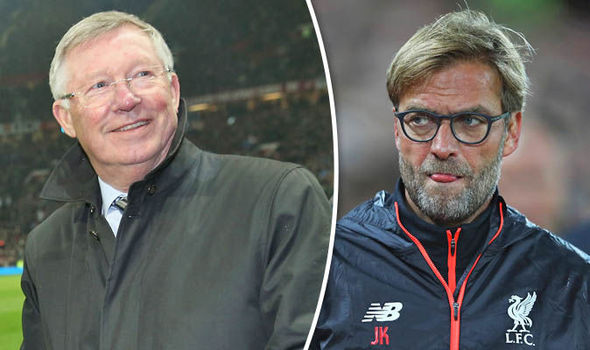 Liverpool’s injuries at the back: 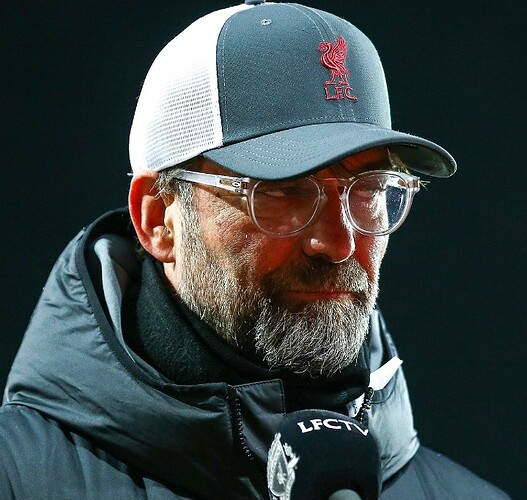 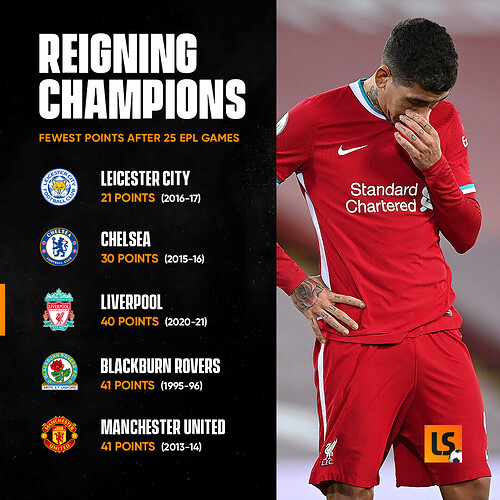 So far, injuries seem to be one of the prime contributing factors to the below par form of Liverpool this season. Apart from that as @Yusuf mentioned :

Came across this interesting data for those who are interested in analyzing this further as a case study. The chart also compares the performance of other clubs.

After 23 games this season, Liverpool had 27 fewer points than they did at the same stage last season, the biggest drop by any reigning champion at this stage of a campaign in English top-flight history.

Difference between Premier League points this season and last season, after 23 games played 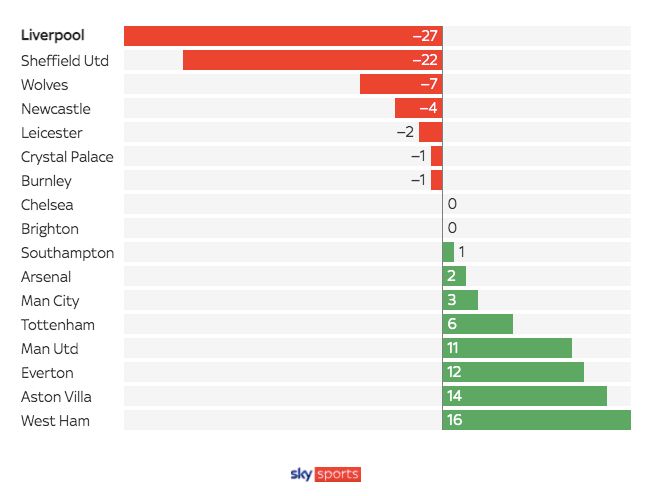 The decline is also greater than any other team that have dipped this season, including Sheffield United (-22), Wolves (-7), Newcastle (-4), Leicester (-2), Crystal Palace and Burnley (both -1).

At the other end of the spectrum, West Ham (+16) and Aston Villa (+14) are among the clubs who have thrived under the unusual circumstances this term, and are far improved on their point tallies of the equivalent stage during 2019/20.

Liverpool have lost players through injuries and illness for over 1,000 days this season 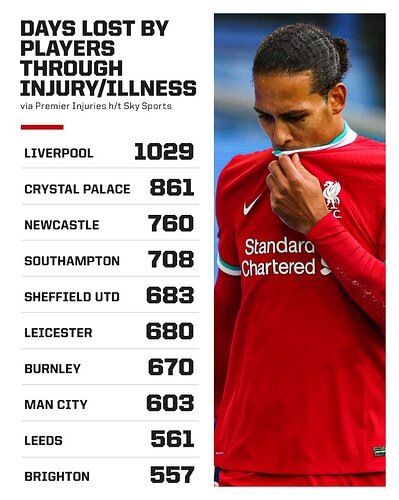 Jurgen Klopp in an exclusive interview with Sky Sports:

“Most of the problems are as a result of the injury situation,” says Klopp. "This year we have faced completely new problems. I have never in my life - and I have been doing the job for 20 years - had to change the last line every week.

"We had a situation on Friday night. We trained all week, or the few days that we had to train, with one specific line-up and then overnight we had to change it completely. That is another big thing to do that is common in football but we have had it plenty of times.

“People might say that is an excuse. I could not care less, to be honest. We do not use it as an excuse but if you ask me the question then it is the explanation for why things changed.”

"We can still defend in a game but the way that we have to adapt is changing the whole balance of the team. That sounds really football-specific but someone who is in it and has done the job would tell you that it is true. That has been a massive challenge.

"Particularly when you are constantly facing top-class teams. It is not just that you are having to adapt to something, it is that the other teams do not have to adapt and can just play on a good day their best football and on another day their second-best football.

"Still, for a while, we got the results we wanted. But then we started playing not that well any more because now we had to put more focus on protecting our offensive situations.

"That is when the results go and you find that the train you want to be on is - if not gone - already far away.

“Now, we are playing good football again. We create chances but we don’t score. So we have had pretty much all of the problems that you can have in football in one season.”

Klopp laughs at the thought of it.

"I am not angry about it or whatever, I am 53 years old. I have had different moments in my life. Wonderful moments, lesser moments. It is just a football problem.

"Dealing with frustration, dealing with failures, you can learn so much in these moments, it is unbelievable. That is what we will do.

99 - Excluding penalties and own goals, Liverpool have failed to score with each of their last 99 shots at Anfield in the Premier League. Since we have exact times of shots available in the competition (2006-07), only two sides have had a longer such run on home soil. Wasteful. 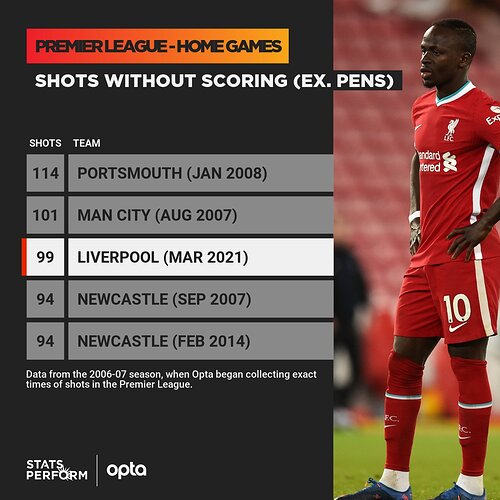 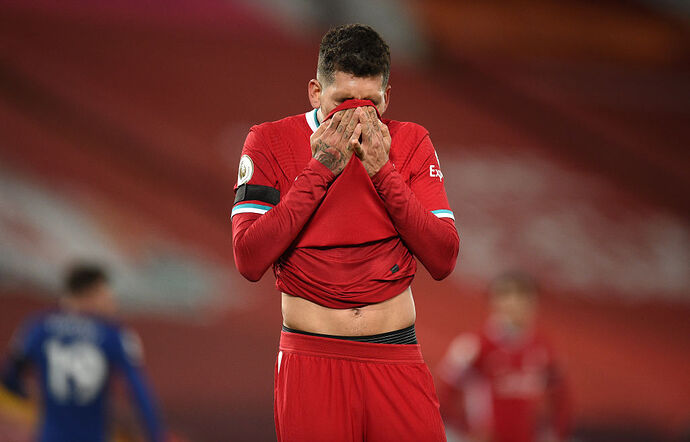 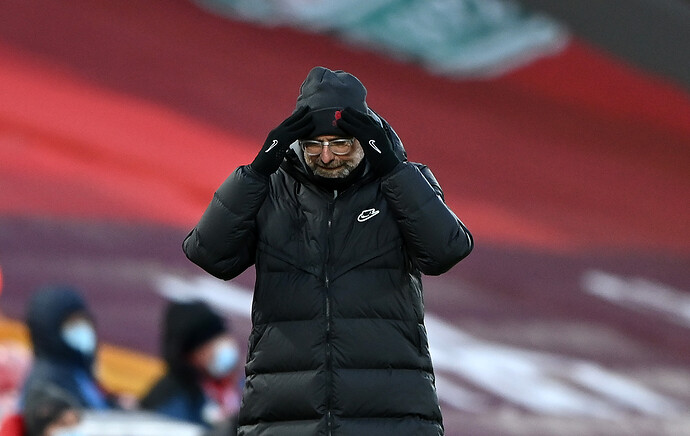 Wigan’s win today means that Liverpool are now the team with the fewest home points of any team in England’s top four divisions in 2021. 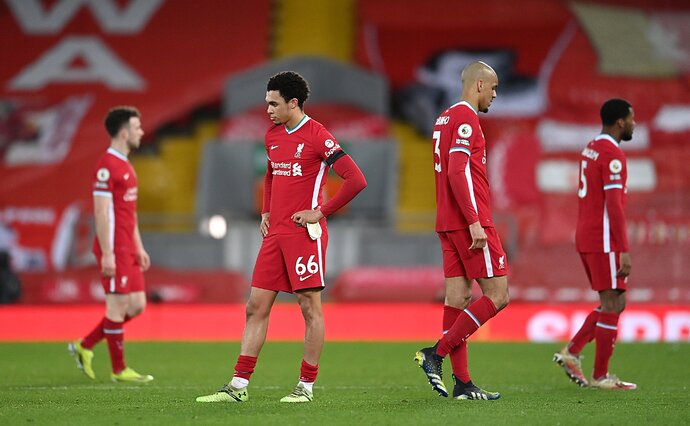 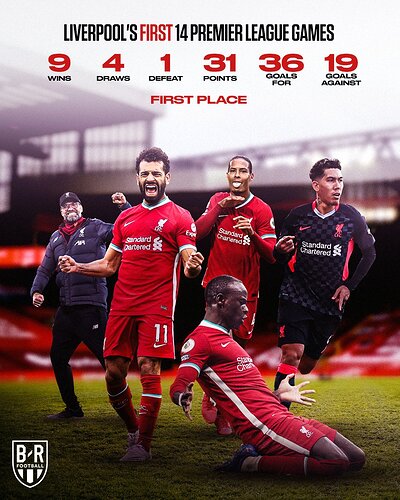 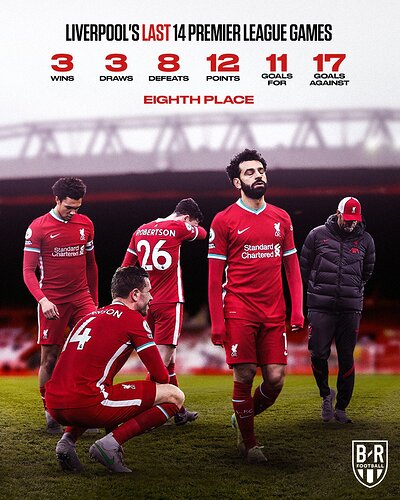 “If he’s still there next season, he will definitely be challenging with Manchester City.

“His contract runs until 2024, so we still have three more years of Klopp in the Premier League for him to have the chance of winning another Premier League title for Liverpool.”

Barnes dismisses the idea of Klopp taking the Germany job after Joachim Low revealed that he will be stepping down as Germany boss after this summer’s European Championship.