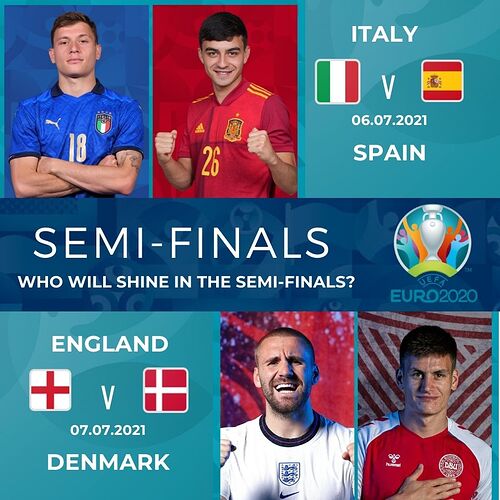 48 matches, 24 teams and only four remain standing tall. The UEFA Euro 2020 campaign is in its final phase as we kick off the semi-finals this Tuesday night with a truly monumental clash. The iconic Wembley Stadium will provide the setting as two giants of Europe, Italy and Spain, battle it out for a place in the finals.

On Wednesday, England will also welcome the Euro 2020 surprise package, Denmark to the Wembley stadium as they battle it out for a place in the final.

In this thread, we shall be covering all EURO 2020 Semifinal fixtures from 6th to 7th July 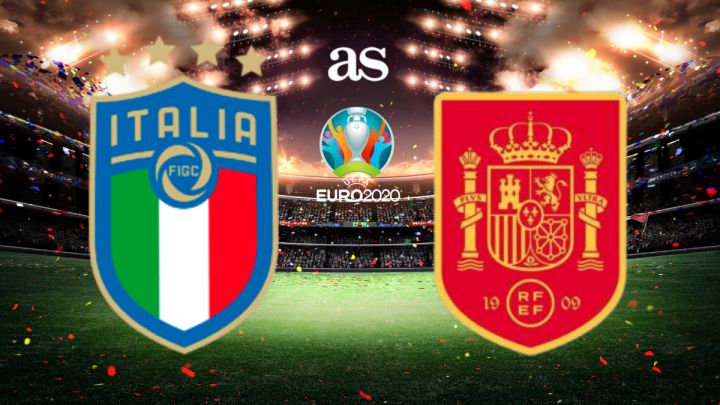 Two of the favourites to win the European Championship, Spain and Italy, will clash on Tuesday at Wembley for a ticket to the tournament’s final.

Roberto Mancini’s men, who dismantled Belgium in the quarter-finals, will try to get revenge from the 2012 final, where Spain beat the Italians 4-0.

The Azzurri stretched their record-breaking unbeaten run to 32 games and became the first nation to win 15 consecutive matches in European competition, including tournaments and qualifying.

Moreover, Italy have won their last 13 games and their last defeat was back in September 2018 against Portugal. In Group A they won all their matches.

Meanwhile, Spain will try to win the tournament for the fourth time, which would make them the most successful nation in the competition’s history, overtaking Germany’s three wins.

La Roja have already scored 12 goals in the competition, same as their highest ever total at the continental finals, set during the 2008 and 2012 campaigns. It will be the 38th meeting between the two countries, with Spain enjoying 13 wins to Italy’s 11, with both teams having scored and conceded 51 times in the process.

Spain haven’t played a major tournament semi-final since their 2012 victory, so the 2010 World Cup winners will try to make history with a fourth title against either the hosts England or Denmark in the final.

Bonucci wary of the threat posed by Morata

The Spain striker has been the target for much criticism in his homeland due to his relatively poor form with two goals in five matches at the finals, a disappointing return for the number of chances he gets.

Italy captain Leonardo Bonucci has sung the praises of his Juventus team mate, saying: “`I’ve had to go through what he went through and I know what it’s like to read and feel certain things as well. He’s a great guy and a terrific footballer, a complete striker. He is one of the best centre-forwards in world football and we need to make sure we are switched on (on Tuesday night).”

Can Italy’s ageless defensive duo cope against a mobile Spanish side?

Italy have the second-best defensive record behind England at the tournament having conceded just two in five matches and kept three clean sheets, thanks largely to the veteran duo of Giorgio Chiellini (36) and Bonucci (34).

While the pair may struggle for pace, they are able to rely on their vast experience – both have won more than 100 caps apiece – and the organisation they instil in their team-mates.

Spain have a mobile, multi-functional approach to attack which is not necessarily beholden to a central striker and Enrique will hope they can change the angles and open up space between Italy’s two great pillars in defence.

Did you know!!!
Italy coach Roberto Mancini became only the second coach in European Championship history to win each of his first five matches in the finals after Michel Hidalgo, who won all five of his matches in charge of France in 1984. 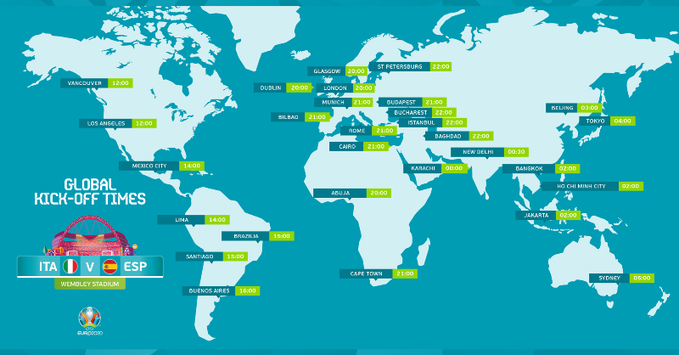 Italy are 2nd in line but as luck would have it they face Spain in semi-finals. Both Spain and Italy are superior to their potential opponents on the other side of the draw. However, England remain the only team yet to concede.

Judging by the numbers,

Spain should be favourites to lift the trophy at Wembley next Sunday.

Having said that, let’s not undermine the fact that all numbers and logic go for a toss when underdogs become a force defying all odds.

Italy have had a stupendous run this tournament and look invincible. We dare not underestimate the four time Champions of the FIFA World Cup!

Having achieved what seemed impossible by getting this far, Denmark have turned into the most resilient team since the shocking start with Christian Eriksen’s cardiac arrest on the field. They have rallied on in the tournament and built a sense of togetherness that cannot be quantified by numbers. Perhaps a human factor such as this will prove decisive and take them to their 2nd Euro Finals since 1992 where they were the Champions. 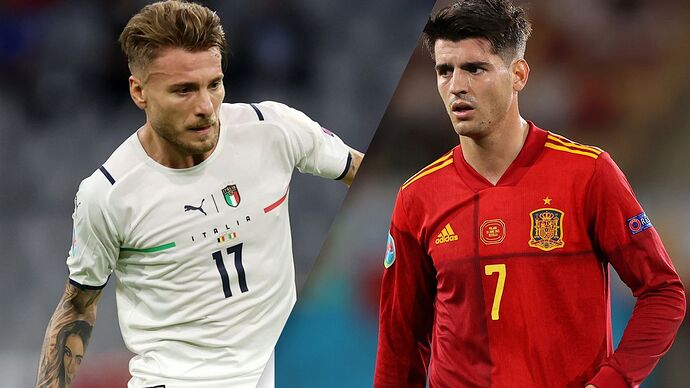 Italy will be without Leonardo Spinazzola after the Roma full-back - one of the best players at the tournament - was stretchered off against Belgium and subsequently underwent surgery on a ruptured Achilles tendon. He will be sidelined for several months.

Chelsea’s Emerson Palmieri will be expected to deputise for Spinazzola, as he did off the bench against Belgium.

Spain withdrew Pablo Sarabia at half-time of their win over Switzerland due to a muscle injury and he isn’t expected to be fit for tonight.

This will be the 34th meeting between Italy and Spain. Of the previous 33, the Azzurri have won just nine while La Roja have picked up 12 victories, with 12 games ending in draws. Spain have lost just one of their last eight matches against Italy. However, that defeat came in the previous edition of the European Championships in 2016. 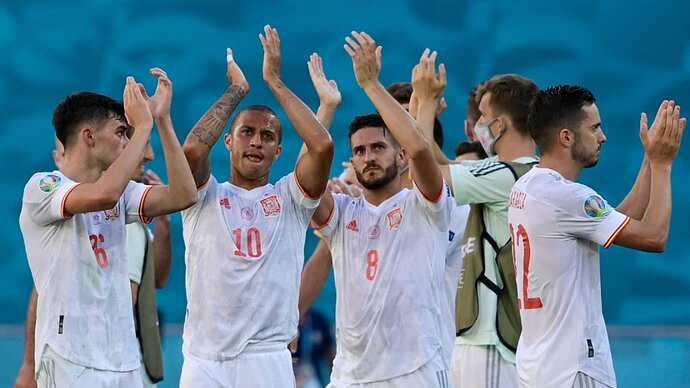 Italy and Spain have met nine times previously in European Championships/World Cup, with the former winning four and the latter just one (D4). 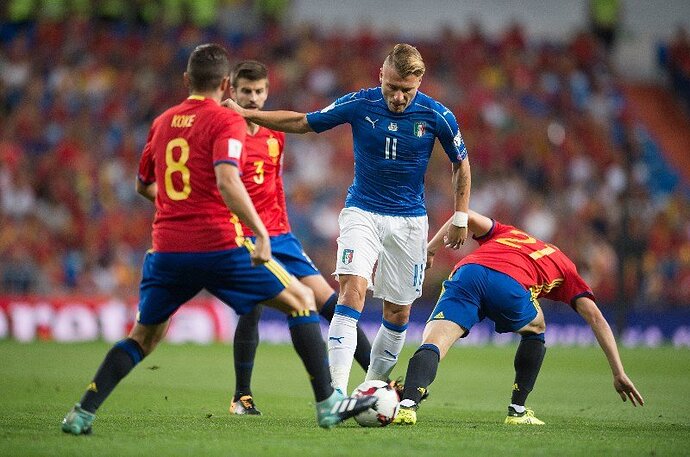 Spain are currently on a 13-game unbeaten run in all competitions (including friendlies). In fact, La Roja have lost just one of their 18 games since international football resumed after the Covid lockdown in September last year (W9 D8). 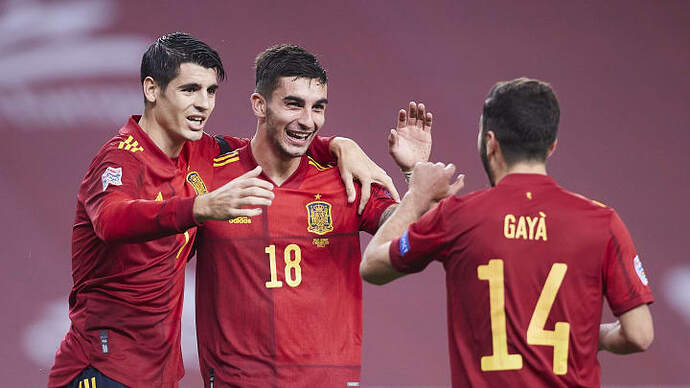 Italy, meanwhile, are on a 32-match undefeated streak – a national team record for the Azzurri. They last lost a game in September 2018, 1-0 against Portugal in the UEFA Nations League. 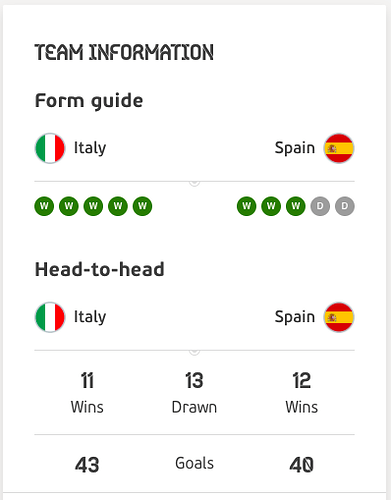 Coach Luis Enrique : “I’m only the leader off the pitch. The real leaders are the players and I have lots of them - within the group that play and those on the bench. If we win this match and go through to the final then it’ll be wholly down to these footballers of ours.”

On psychology – a favourite and important subject for the Asturian – Luis Enrique says: “We have [psychologist] Joaquín Valdés to handle the psychology of this event and it’s a fact that we try to avoid anyone getting over exuberant about a big occasion like this. It’s about having precisely the right motivation and focus.”

Roberto Mancini, Italy coach on the Italian media considering Italy favorites to reach the final: “I hope that you get it right, for once. It won’t be that simple: we will have to play a great match, Spain are a great team. We are in the semi-finals, so it’s very hard to find simple games.”

Mancini on tiki-taka: “[Spain] invented it, it has led them to extraordinary successes and they continue to do it well. Our possession is slightly different; we are Italian and we cannot suddenly become Spanish. We will try to play our game.”

Did you kow!!!
Chelsea are the only team with a representative in the squad of all four semifinalists at EURO 2020 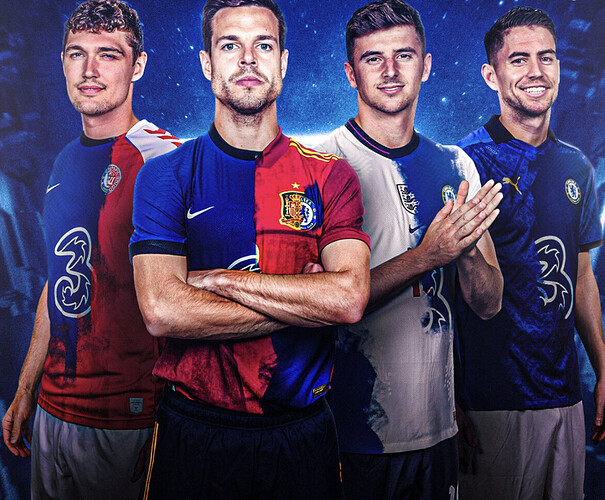 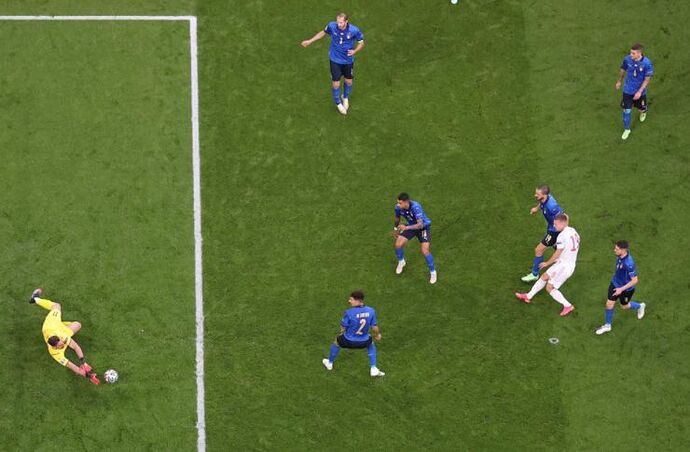 Italy level with Spain in semi-finals at half-time. 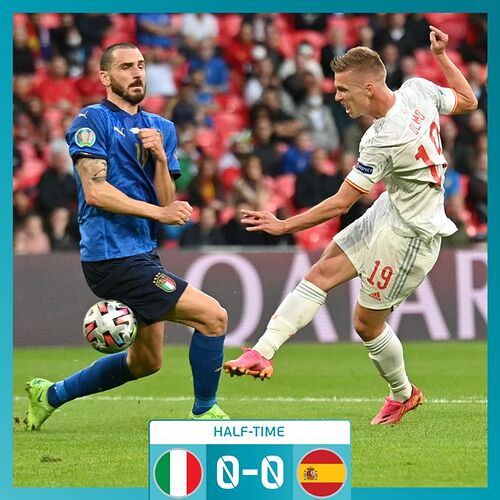 Spain were the better side in that first half. The much-anticipated duel for possession was not a contest, with Luis Enrique’s side clearly having the better of the ball. Still, Italy had the biggest chance of the game when Emerson hit the bar just before the break. It is wide open, but Italy probably need to change a detail or two when they try to build from the back, as something is not working as planned.

If this type of game doesn’t have you transfixed, then you and I are very different. Loads of daring, lots of enterprise, no quarter given or asked, full-tilt football full of high technique. But high anxiety too. There’s already a palpable sense of “first to score wins”. That might be a very early call, but it’s how this lovely first half has left most of the Wembley audience feeling.