The wait is finally over. After a year-long postponement due to the pandemic, the much-anticipated UEFA Euro 2020 will finally kick off this Friday night.

Twenty four nations are going for glory with games spread all over the continent. 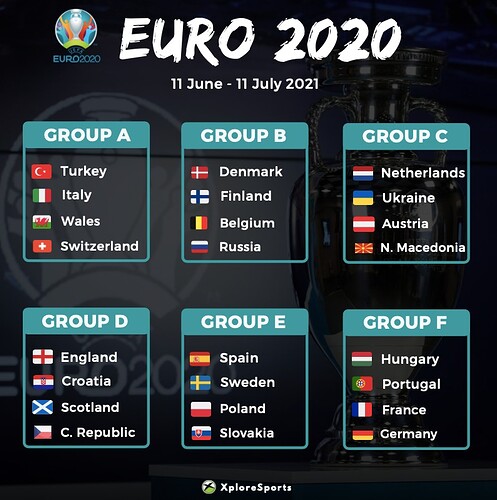 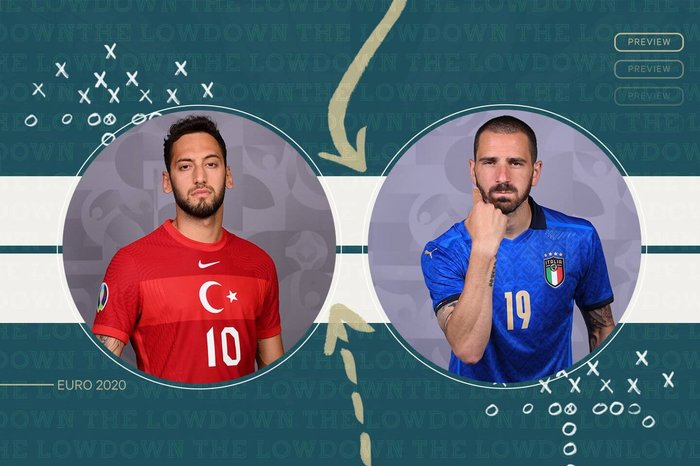 UEFA Euro 2020 will kick off tonight with a Group A encounter that pits a resilient Turkey outfit against an in-form Italy at Stadio Olimpico in Rome.

Turkey enjoyed a fine qualifying campaign for the Euros, finishing behind France in Group H, losing just one of the ten games they played while letting in a mere three goals. That was followed by the disappointment of relegation in the UEFA Nations League, though, with the Crescent-Stars unable to get going in the tournament last year.

However, Senol Gunes’ side has managed to pick up some momentum heading into the Euros, winning four of their six games since the turn of the year (D2), which includes a 4-2 triumph over the Netherlands in the World Cup Qualifiers in March.

Italy, meanwhile, after having faced the ignominy of missing out on the 2018 FIFA World Cup, have been on a roll under Roberto Mancini. The Azzurri cruised through their Euro Qualifiers, topping Group J with utmost comfort as they won each of their ten games, scoring 37 times and letting in just four goals. They go into this tournament as favorites, having been on a brilliant 27-game unbeaten run, last losing a match in September 2018. 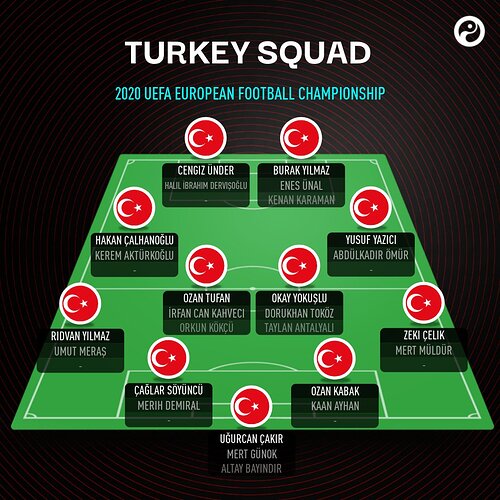 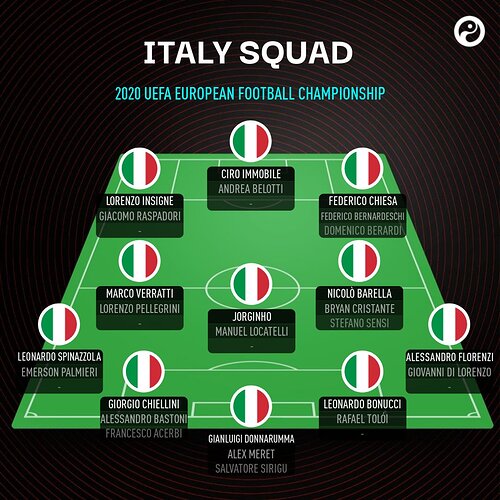 Italy have never lost at the Stadio Olimpico in a major tournament, World Cup and Euro combined, winning six and drawing two. They also haven’t conceded a single goal in each of those last seven games. 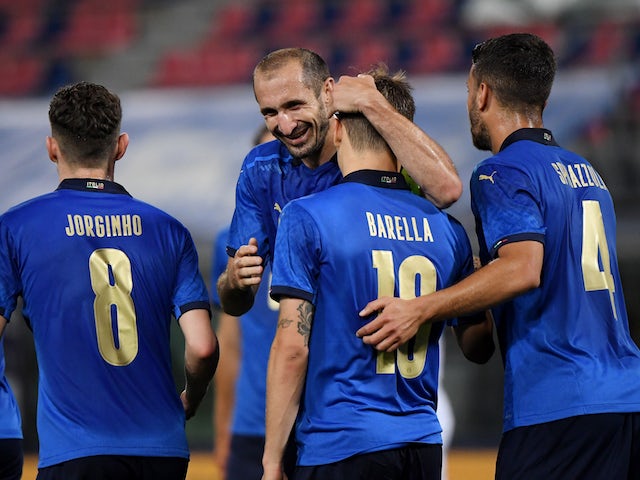 Turkey conceded only three goals in 10 games in the Euro 2020 qualifying campaign, the joint-best defensive record alongside Belgium. 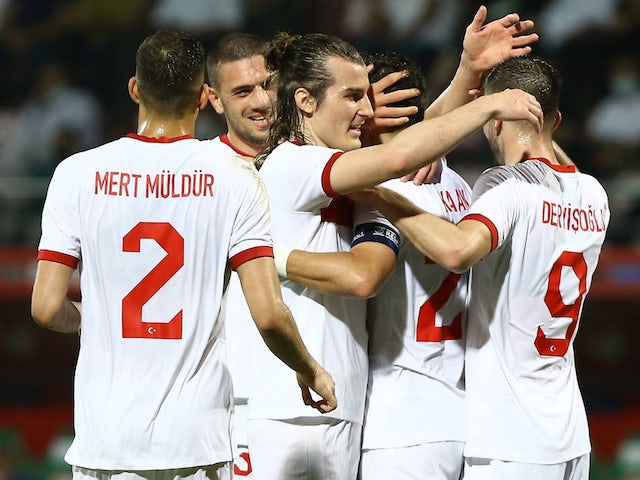 Turkey have lost all four of their opening games at Euro finals - this includes their opening match against Italy in the 2000 tournament (1-2). 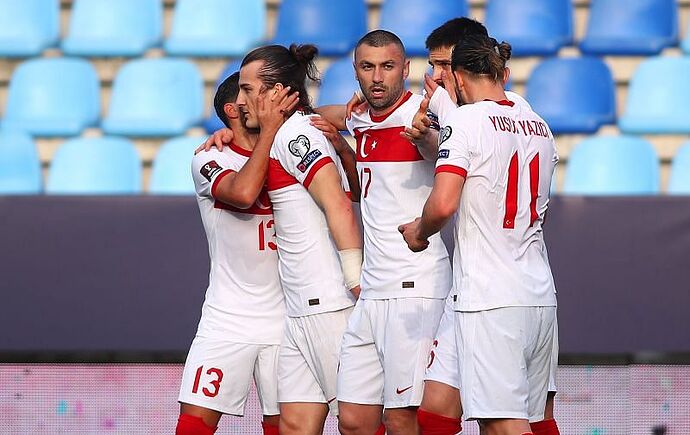 Coach: Şenol Güneş
A six-time title-winning goalkeeper for Trabzonspor and Turkey, Güneş coached his country to third place at their only recent FIFA World Cup in 2002. He won two championships in charge of Beşiktaş, prior to reprising his Turkey role in 2019.

Key player: Burak Yılmaz
The team’s elder statesman at 35, and Güneş’s first-choice striker. Turkey’s second-highest international scorer has managed a goal every two games throughout his career, and is still banging them in at newly crowned French champions LOSC Lille.

One to watch: Hakan Çalhanoğlu
With great technique, long-range shooting ability and knuckleball expertise, the 27-year-old is a playmaker that produces. Playing some of the best football of his career, the No10 notched four goals and ten assists for AC Milan in Serie A this season.

Did you know?
Turkey have qualified for five of the last seven EUROs, having made it to the finals for the first time in 1996.

Coach: Roberto Mancini
One of the best forward players of his generation, though never that lucky with the Azzurri, Mancini is eager to sparkle as an international coach after winning club trophies in Italy, England and Turkey.

Key player: Nicolò Barella
The box-to-box midfielder holds the key to Mancini’s formation. Sardinian-born and now a key part of Inter’s Serie A winning side, the 24-year-old really is the full package, bringing tackling, technique, lots of energy and dangerous, well-timed runs into the opposition box.

One to watch: Federico Chiesa
Older readers will remember the name Chiesa from his father, a star of the much-vaunted Parma side of the late 1990s. Born during that period, Federico has had a stellar first season with Juventus, including netting the winner in the Coppa Italia final. The big stage won’t faze him and he could shine for his country.

Did you know?
Italy’s flawless EURO qualifying campaign ended with a 9-1 win against Armenia in Palermo. It was their national-record 11th straight victory, and gave them ten wins in a calendar year for the first time. One more goal and it would also have matched their biggest victory ever: 9-0 against the United States in 1948.

Match ball ready at the Olimpico in Rome! 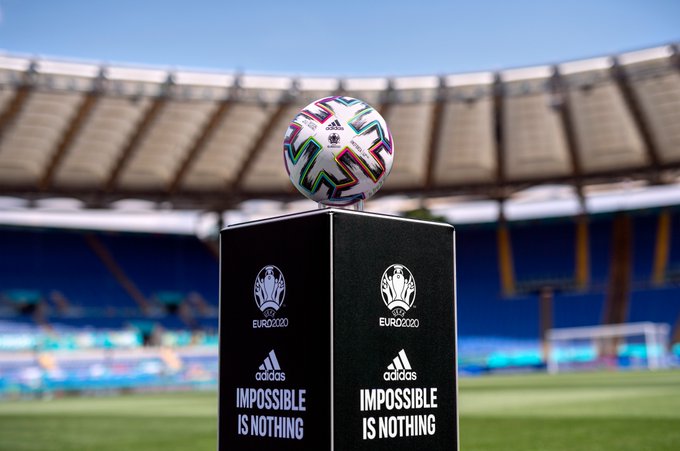 For Turkey, he has Hakan Çalhanoğlu 𝒂𝒏𝒅 club teammate Yusuf Yazıcı serving up the chances.

The 11 Azzurri selected by Roberto Mancini for tonight’s opener! 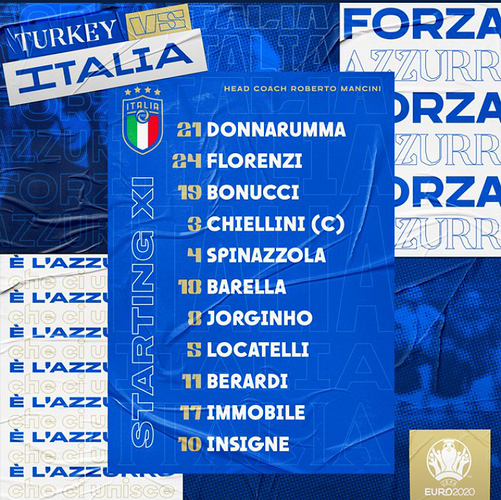 2000 - Turkey and Italy’s only previous encounter in a major tournament was at Euro 2000, also on 11th June. It was also their opening game of the tournament, ending 2-1 to Italy courtesy of goals from Antonio Conte and a Filippo Inzaghi penalty. 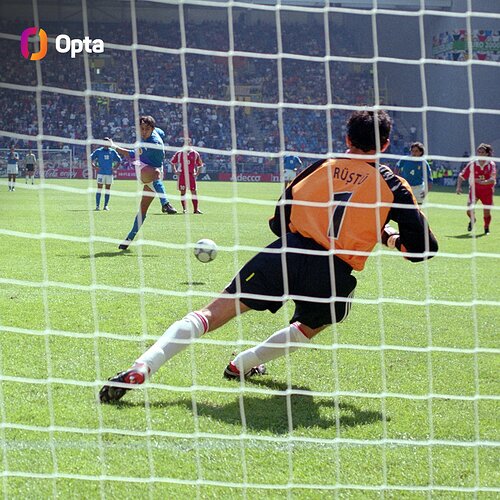 8 - Italy have never lost at the Stadio Olimpico in a major tournament (World Cup and Euros combined - W6 D2). They also haven’t conceded a single goal in each of the last seven of those eight games. 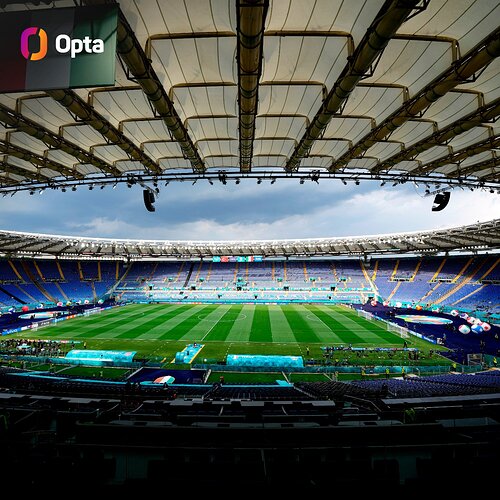 Ciro Immobile has had 10 shots on target in his last three competitive games for Italy.

Averaging a shot on target every 20 minutes in those three games. 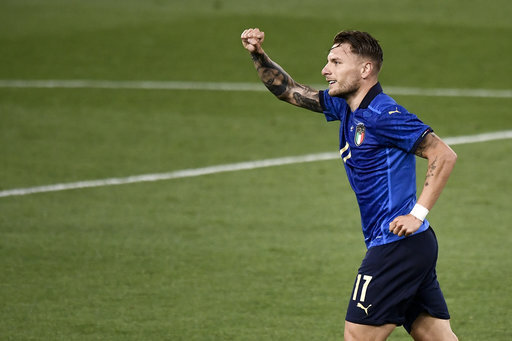 Manuel Locatelli during the 2020/21 Serie A season: 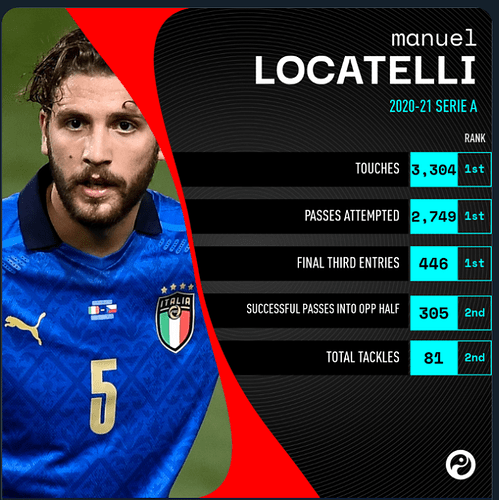 22 - Aged 22 years and 106 days, Gianluigi Donnarumma today becomes the youngest ever goalkeeper to play at a major tournament (World Cup & Euros) for Italy. 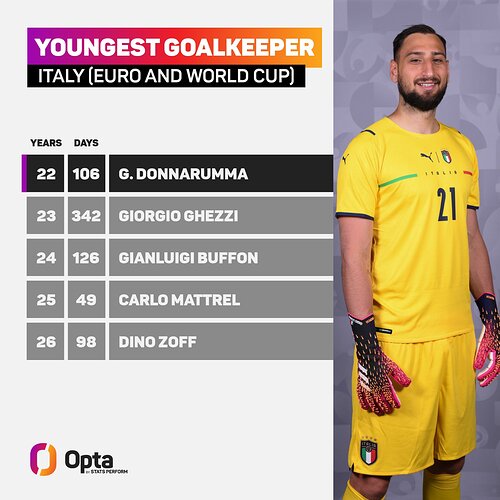