🤔 Thoughts on Cristiano Ronaldo’s Punishment by Manchester United- Is it a correct decision? 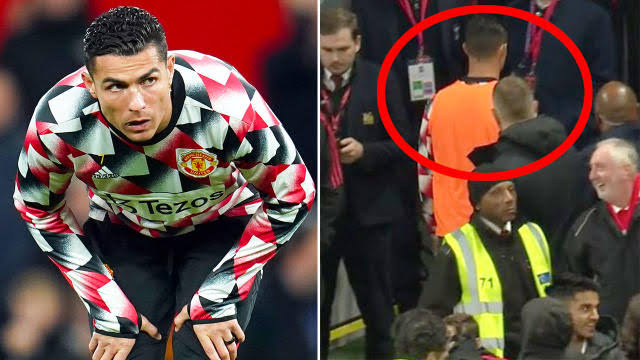 Cristiano Ronaldo has made all the football headlines these past few days for walking down the old trafford tunnel before full time vs Tottenham.

And it has since come to light that Ronaldo flatly refused to make an appearance in the dying minutes after being brought back to the bench, according to Mail Sport.

The attacker has since been removed from Manchester United’s matchday squad against Chelsea after failing to comply with Ten Hag’s stringent disciplinary guidelines: "For Manchester United’s match against Chelsea on Saturday, Cristiano Ronaldo won’t be on the team. The remainder of the team is entirely focused on getting ready for that match, "a statement released by United reads.

This issue has generated a lot of debate amongst football fans over the past hours. What are your thoughts about this?

My take on this…

Erik did the right thing by punishing Ronaldo, he’s a great player but the team should always come first & he’s not above the coach. Every player regardless who they’re should get on board with whatever the coach wants (if its for the betterment of the squad). Most disappointing thing is a lot of players look up to him as a role model.
This is Poor behavior from Ronaldo by all standards. 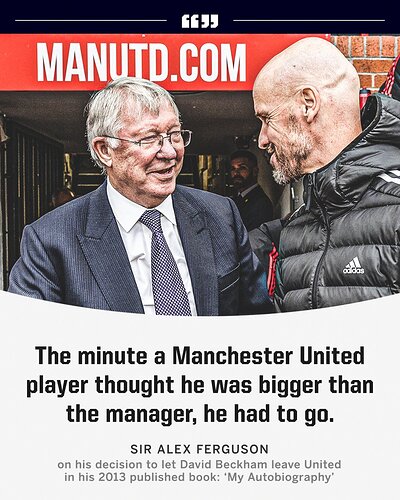 Revealed: How much Ronaldo could be fined for walking off vs Spurs 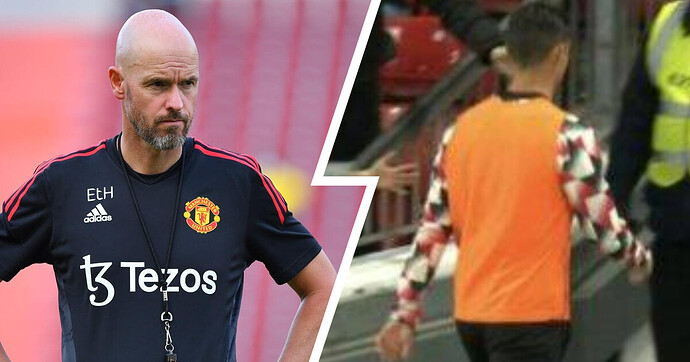 Cristiano Ronaldo may have to forego a whopping £1 million from his wages as fine for walking off before the final whistle against Tottenham Hotspur.

That’s according to the Daily Star, who claim Erik ten Hag is not pleased with how Ronaldo disrespected Manchester United.

As a result, the boss wishes to dock his wages for two weeks, which amounts to £1 million.

The 37-year-old won’t be part of the squad to face Chelsea, as per a club statement.

With the winter transfer window fast approaching, it’s up to United to find a permanent solution for Ronaldo.

“Giving in to the pressure is not an option. It never was. This is Manchester United, and united we must stand.” 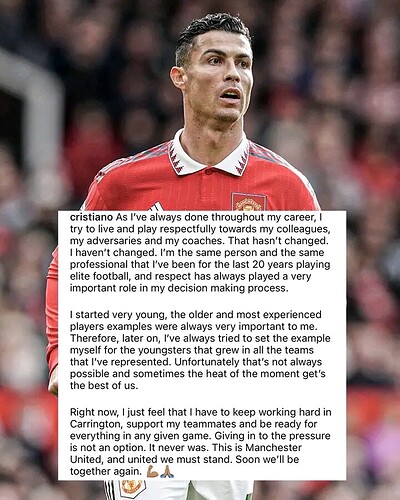 “It is only logical that Ronaldo will be absolutely fuming with that, naturally, I wouldn’t expect anything different from him. I think the big problem Erik ten Hag has got is that, coming up to this next window, he has to think very carefully about what he does.

If he doesn’t see Ronaldo as a starter in his team more often than not, I think he has to release him from his contract. He has to let him go. It’s not fair on anybody, on the club, on Ronaldo, on Ten Hag, that the first question after every game is ‘Why didn’t Ronaldo start?’”

I agree with his Rio’s opinion to some extent. I agree that Ten Hag should make it clear that he doesn’t want Ronaldo as a starter. However, it is not Ten Hag’s fault as no one wanted Ronaldo in the transfer window.

Coming to Ronaldo’s reaction, I believe it was wrong. Even if he is who he is, no player should put his personal benefit over the team’s. 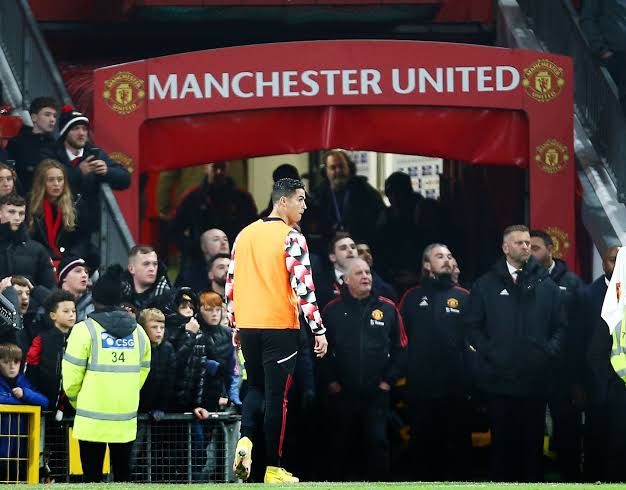 I must to say Erik ten hag made a nice decision on Cristiano Ronaldo issue about leaving the field during a football and also refusing to come on against Tottenham. Ronaldo is a disciplined professional footballer no doubt about that, but he has to learn more from football, he as to obey every command from the head coach, Erik made a nice decision, that’s my view.

Cristiano Ronaldo’s decision by leaving the pitch was a bad idea someone like him could have made
No matter who you are or the kind of achievement you’ve had,a player should not consider himself bigger than the club.

As the new manager always say,he wants a team that work together,he does not want to build a team that win matches alone but also a team with unity and players fighting for their place.
Ronaldo’s decision to leave the pitch when the match is still on and his team is winning is a wrong decision for him cause he is an idol to other players and a lot of people look up to him

I would say Ronaldo deserve whatever punishment he’s given either by the club or the manager himself.

Erik ten Hag asked whether Cristiano Ronaldo has been fined: “That is not an issue to discuss here. That is between Cristiano and the club.”

Erik ten Hag asked if Cristiano Ronaldo will return to first-team training on Monday: “First we will talk. I don’t think [it will be long-term], no. That is not my purpose. I want him to be in the squad, I want him to get in form for every game, because he has an impact.” 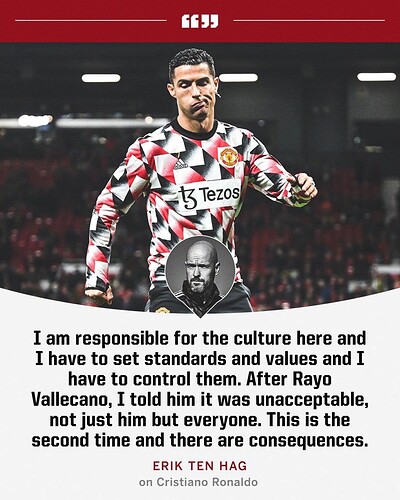 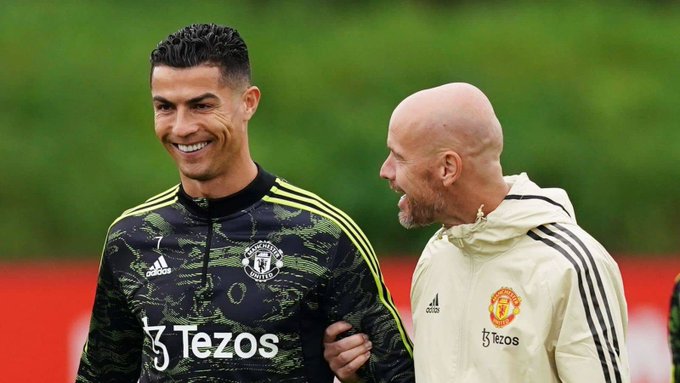 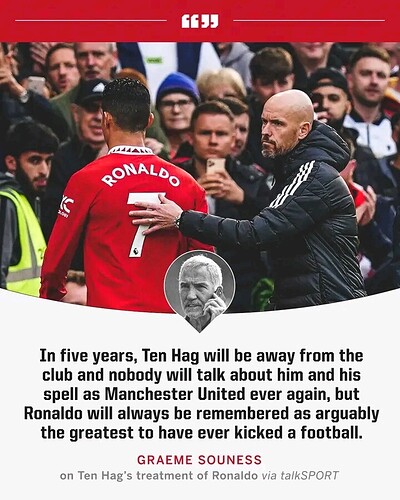 Hmmm… a little too presumptuous!

There is no doubt Ronaldo will always be remembered fondly for his earlier stint at ManU but for this second one maybe in a negative light, for how things could go if the player thinks himself greater than the club.

Too early to say anything about Erik ten Hag’s legacy. He sure is taking tough calls in tough situations and showing the positive impact on the outcome with his squad selection.

Are Manchester United better without Ronaldo? 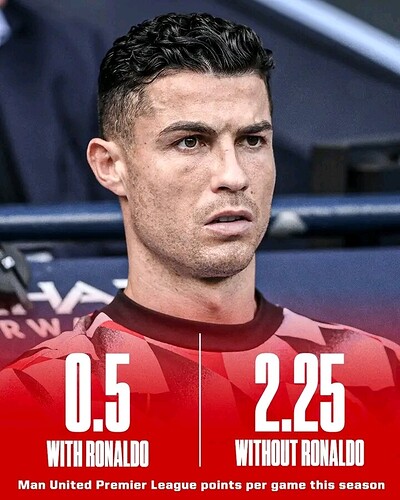 I sure would remember ten Hag next to Alex Ferguson for fair selection based on current player performance and not on past accolades and status.

13 Likes
Cristiano Ronaldo - Should he stay at Man Utd or go? 🤔