Indians are killing it at Asian Shooting championship at Qatar. Till now record 15 shooters have qualified for Tokyo so far. 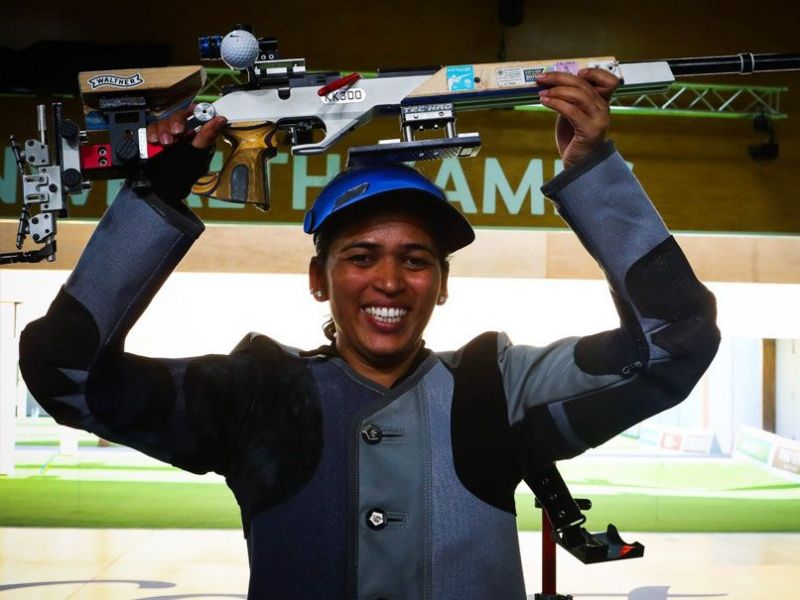 Really a proud accomplishment for India, who will have a record participation of at least 15 shooters at next year’s 2020 Olympics in Tokyo. A few more could potentially join based on ranking as the Games get closer.

Here’s a look at all the shooters who secured an Olympic berth.

25 year old Anjum Moudgil was the first Indian athlete to make the cut for the 2020 Olympics in Tokyo by taking a silver medal at the 2018 World Championships in Changwon, South Korea, which was the first qualification event for the Olympics.

This will be Anjum’s maiden appearance at the Olympic Games. The current top-ranked shooter in the women’s air rifle category, Apurvi Chandela also secured an Olympic berth along with Anjum in the same South Korea World Championship. She finished in fourth place with a score of 207 in the women’s 10m Air Rifle final.

The 26-year-old participated in the 2016 Rio Games where she finished in 34th place. With gold in World Cup, Commonwealth Games and Asian Games, Apurvi can shoot higher for Olympics. The 17-year-old is the only Indian shooter to win a gold medal in ISSF World Championship, ISSF World Cup, Youth Olympic Games,Asian Games and Asian Air Gun Championship. He became the youngest Indian gold medalist at the 2018 Asian Games. He nabbed a silver at the recently concluded 14th Asian Shooting Championship in Qatar.

Saurabh won his 2020 Olympic quota with a gold on home soil at the ISSF World Cup in New Delhi earlier this year. 17-year-old Manu Bhaker sealed her berth for the Olympics through the ISSF World Cup in Munich, where she finished 4th in the women’s 10m Air Pistol.

The youngster has been in splendid form winning a gold at the recently concluded Asian Championship in both individual and team event. 29 year old veteran shooter, Rahi Sarnobat, became the first Indian woman shooter to qualify for the 2012 Olympics in the 25m Air Pistol. She finished 19th at the 2012 London Games. She missed the 2016 Games in Rio due to an injury but sealed an Olympic berth at the ISSF Munich World Cup.

Sarnobat looks a strong contestant with the 2018 Asian Games gold medal under her belt. Sanjeev Rajput who claimed the silver medal with a score of 462 in the final of the ISSF World Cup in Rio sealed a berth for the 2020 Olympics.

The veteran shooter participated in the 2008 Beijing and 2012 London Games. Now with an Olympic berth sealed for a third time in his career, the reigning Commonwealth Games gold medallist will hope to win in Olympics. 30-year-old Verma clinched India’s second quota in the men’s Air Pistol with a gold medal at the ISSF World Cup in Beijing. Verma has won two ISSF World Cup gold medals and an Asian Championship bronze in the last 12 months.

Abhishek remains one of the nation’s main prospects heading into Tokyo 2020. Yashaswini Deswal sealed her berth at Olympics after winning a gold medal at the ISSF World Cup in Rio.

Apart from her individual wins, Deswal has shown great promise in the mixed team category, winning a silver in Doha while pairing up with Chaudhary. The 32-year-old veteran shooter started off India’s stellar show at the Asian Championship, as he claimed a bronze medal and an Olympic berth on the very first day of the competition.
He also won a silver medal at the 2018 Asian Games. Deepak will make his Olympic debut in Tokyo next year. 21 year old Chinki Yadav competes in the 25 metre pistol and secured a quota place for India at the 2020 Summer Olympics by qualifying at the recently concluded 2019 Asian Shooting Championships in Doha. Tejaswini Sawant pocketed a berth at Tokyo 2020 with a 4th placed finish at the Asian Championship. The youngster’s bronze in Doha meant India will have maximum participation in the men’s 50m 3 position Rifle category. At the Asian Championship in Doha, 44 year old veteran Mairaj Khan clinched the silver medal to claim the second men’s skeet quota for the 2020 Tokyo Games. Mairaj had participated in the 2016 Rio Games where he finished in ninth position.

He is the first and only Indian to have held both the World Cup title as well as the Olympic quota for India at the same time. With 15 participants securing a spot at the Tokyo 2020, Indian team will be optimistic on improving their showing from 2016 Rio Olympics where Heena Sidhu finished in 20th position after qualification.

All the best to the entire shooting team who have secured a berth at 2020 Olympics!

The Indian shooting contingent brought the curtains down on a highly successful ISSF World Cup with the women and men’s teams clinching gold medals in the Trap events on Sunday.

In the men’s Trap Team event, Kynan Chenai, Prithviraj Tondaiman and Lakshay beat the Slovakian team in the gold medal match to make it 30 medals for India in the shooting World Cup.

India topped the medals tally with a whopping 30 medals in total (15 gold, 9 silver and 6 bronze). Next best, the USA, were way behind with a total of eight medals (4 gold, 3 silver and one bronze). 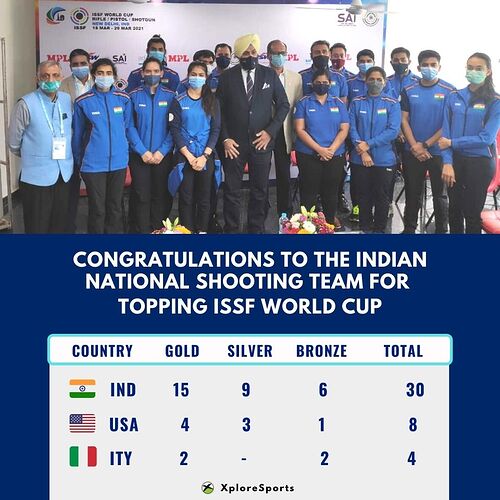 Raninder Singh, the head of the National Rifle Association of India on Sunday said the team for Tokyo Olympics will be announced on April 3 or 4 and it will include two reserves per event owing to the threat posed by Covid-19 pandemic.

Indian shooters have secured an unprecedented 15 Olympic quota places for the country but, as per the federation’s selection policy, the final team will be picked taking into account the scores in all tournaments and trials leading up to the Games.