As we approach the last ten games of this Premier League Season, the title looks destined to be going back to the City of Manchester as Man City could open a 17 point gap between them and their closest rival Manchester United when they host the Red Devils at the Ethiad on Sunday late Kick off while the battle for the top 4 looks to be the most exciting challenge in the Premier League this season, as Chelsea, West ham, Spurs,Everton and the lackluster Liverpool battle it out for the top 4.

Having lost 5 consecutive games at Anfield for the first time in their entire history, Liverpool host a rejuvenated Fulham side at Anfield, Everton travel to Stamford Bridge to play Chelsea who are still unbeaten under Tuchel, Tottenham host Crystal Palace at the Tottenham stadium, Westham host Leeds at the London Stadium and elsewhere, Arsenal travel to the Turf Moor to face Burnley. 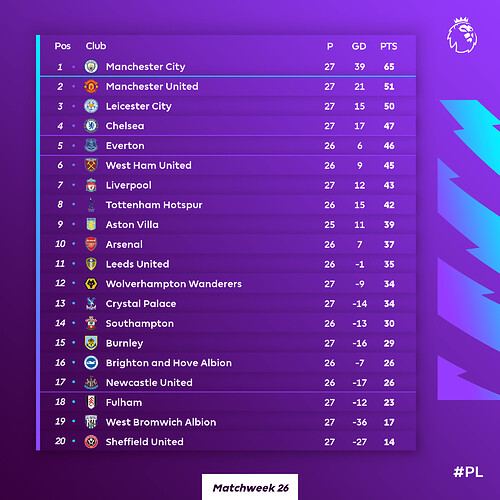 In this thread we will be covering fixtures of Matchday 28 from 6th March to the 8th of March. A total of 10 matches 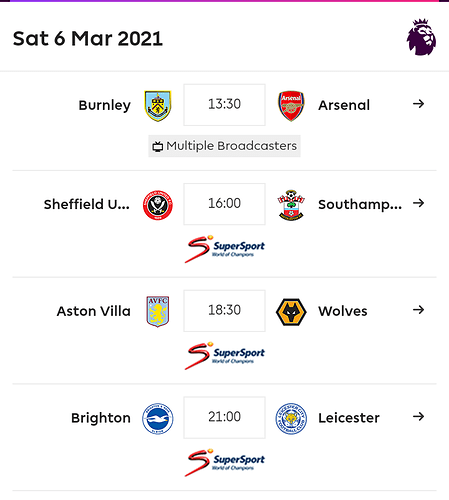 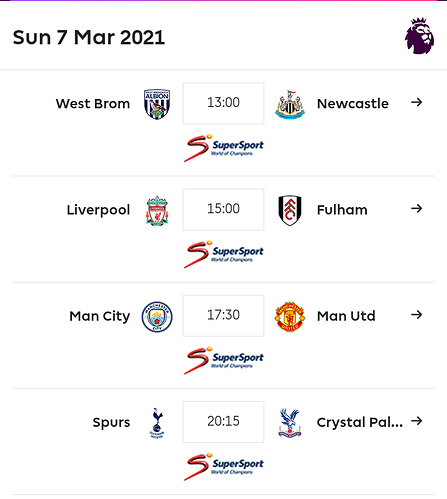 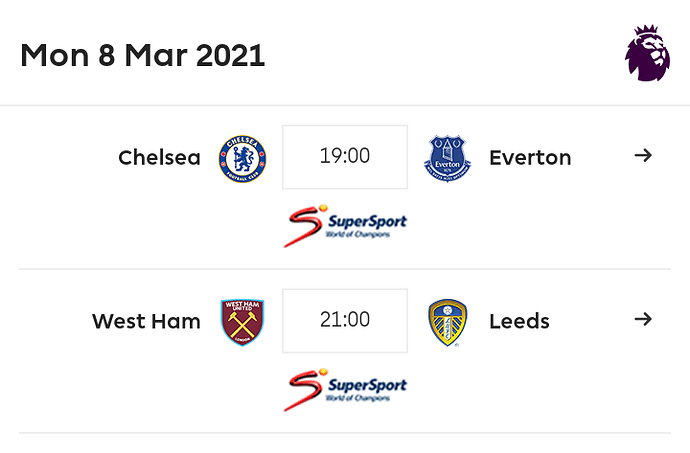 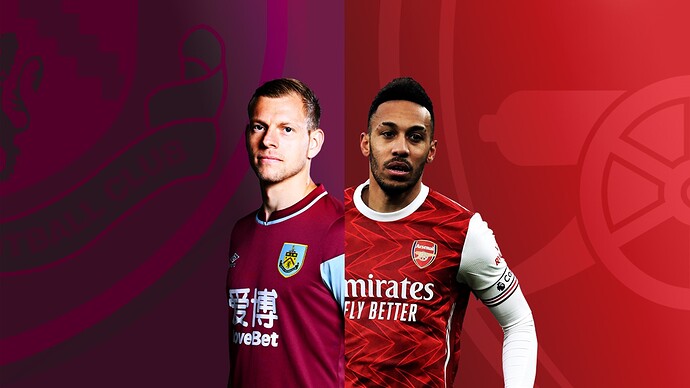 The Premier League is coming at us at a relentless pace at the moment, Gameweek 27 set to get underway this weekend. The first match of the weekend will be played at Turf Moor, where Burnley will play hosts to Arsenal in Saturday’s lunch-time kick-off.

Burnley have found stable footing after a slow start to the season, and have been slowly pulling clear of the relegation zone in the last few months. However, their most recent run of form has been a little underwhelming, with the Clarets without a win in four Premier League games, although they earned a creditable 1-1 draw with Leicester City earlier this week.

Arsenal, on the other hand, continue to blow hot and cold in the Premier League, which is not letting them climb up the table and make a case for a top six finish. As things stand, the Gunners are 10th in the standings, and have won just two of their last six top-flight outings. Their most recent result, though, provides cause for optimism, as they handed Leicester a 3-1 defeat last week.

The reverse fixture, played back in December, saw Burnley eke out a shock 1-0 win over Arsenal, with Pierre-Emerick Aubameyang scoring an own goal.

Jack Cork could add to Burnley’s injury worries for the visit of Arsenal.

Arsenal will be hoping to have Emile Smith Rowe available.

The Gunners have no other fitness concerns as the likes of Bukayo Saka and captain Pierre-Emerick Aubameyang push for recalls having been dropped to the bench last time out.

Burnley are looking to complete their first league double over Arsenal since the 1962-63 campaign, following their 1-0 win at the Emirates earlier this season. 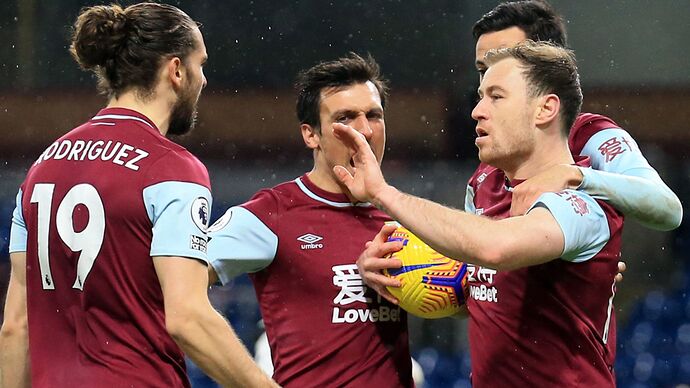 Arsenal are unbeaten in their last eight away league games against Burnley (W4 D4), keeping a clean sheet in four of their last five. Their last league defeat at Turf Moor was in December 1973. 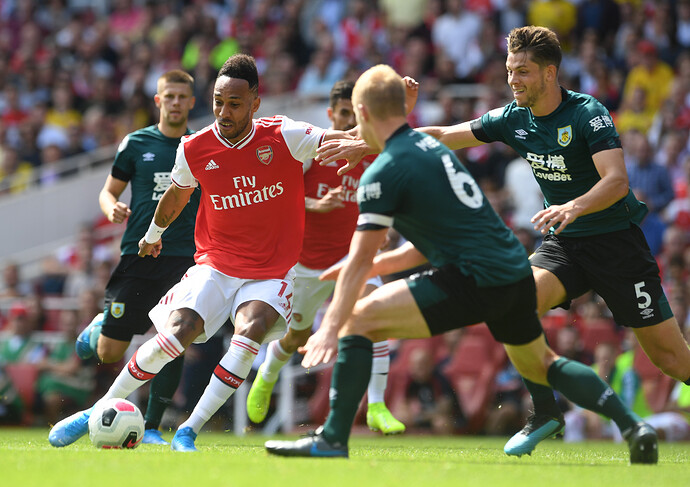 Following 3-2 and 3-1 victories against Benfica and Leicester respectively, Arsenal are looking to score 3+ goals in three consecutive games in all competitions for the first time since September 2019 under Unai Emery. 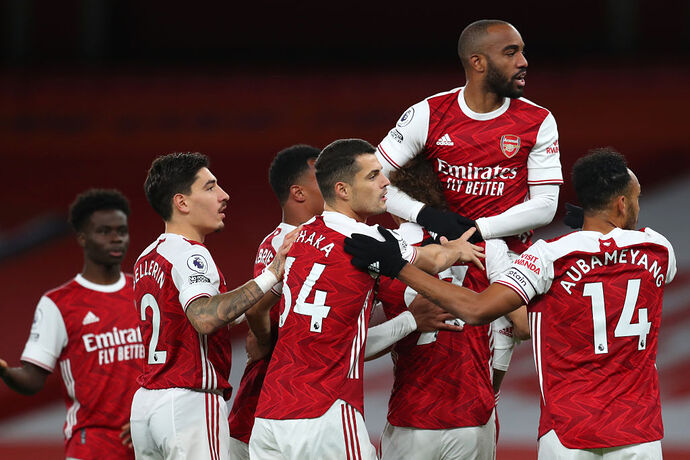 Arsenal’s Nicolas Pépé has scored in four of his last five away games in the Premier League, having netted in just two of his first 18 on the road in the competition. 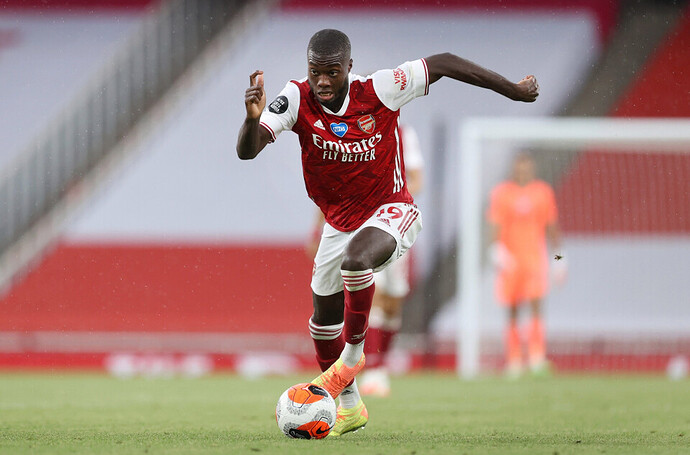 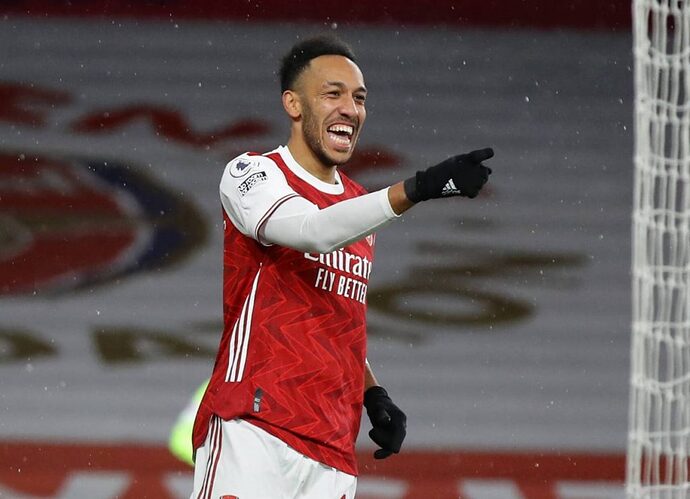 Pierre-Emerick Aubameyang has scored more Premier League goals against Burnley than he has any other side in the competition (7). However, the Gunners captain scored the winning goal at the wrong end in the reverse fixture this season.

Phil Jagielka’s contentious red card for denying Anwar El Ghazi a goal-scoring opportunity during the second half of the 1-0 win against Aston Villa means he must now serve a suspension for Sheffield United.

The 38-year-old joins the injured Chris Basham, Jack O’Connell and John Egan in being unavailable to Wilder, prompting the Blades boss to sarcastically suggest that striker Oli McBurnie will line up in central defence against Southampton.

Ralph Hasenhuttl finally has some positive news on the injury front but warned Southampton will continue go through seasons of highs and crashing lows unless the squad is majorly bolstered this summer.

Oriol Romeu, Will Smallbone and Michael Obafemi remain out with long-term issues but Ibrahima Diallo, Takumi Minamino and Kyle Walker-Peters are back this weekend.

Sheffield United have lost two of their last three home league games against Southampton, more than they had in their previous 15 at Bramall Lane (W11 D3 L1).

Southampton have won their last three league meetings with Sheffield United, last winning four in a row against them in 1950 in the second tier.

Sheffield United have won just one of their seven Premier League meetings with Southampton (D2 L4), with that victory coming in the first such meeting between the sides in October 1992 (2-0).

Sheffield United have lost all eight of their Premier League games played on Saturdays this season - as it stands, it’s the highest number of games a team has played on a specific weekday within a single Premier League season with a 100 per cent loss rate.

Aston Villa skipper Jack Grealish misses out for a fourth game due to a lower leg injury, with boss Dean Smith saying: “He’s doing better, he’s unlikely to play. He looks pain-free so once I sit down with the medical staff, we’ll decide what he’s doing today.”

Matty Cash (hamstring) and Kortney Hause (foot) have been doing some running as their recoveries continue, and Wesley, out since January 2020 due to a knee injury, has been in full contact training.

Nuno Espirito Santo is likely to have the same squad as the defeat for Wolves at Manchester City, with Marcal, Raul Jimenez and Daniel Podence all still on the sidelines through injury. 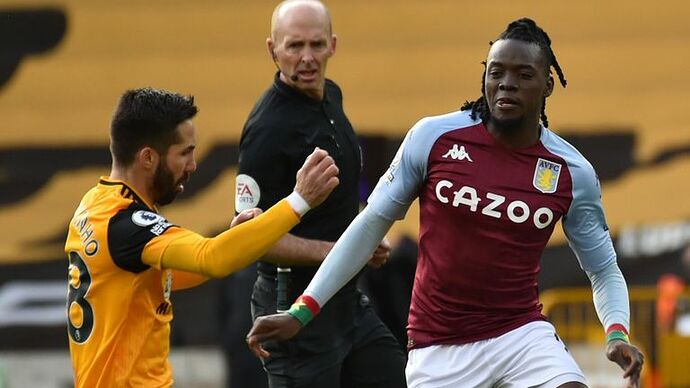 Aston Villa are looking to secure their first league double over Wolves since the 2003-04 campaign, following their 1-0 win at Molineux back in December.
Wolves won this exact fixture 1-0 last season - they haven’t won consecutive away league games against Aston Villa since a run of three between 1957 and 1960.

Aston Villa have won just one of their last six home league games against Wolves (D3 L2), having won six of their seven prior to that (L1).

Aston Villa have won all five of their Premier League home games when scoring first this season and lost all five at Villa Park when conceding first. The other game finished goalless, making Villa Park the only ground not to see a single point gained/lost from a losing/winning position this season.

Aston Villa have the highest win rate in Premier League games played on Saturdays this season (75 per cent - 6/8), while Wolves (five games) are one of two sides yet to win on Saturday in the top-flight so far this term (along with Sheffield United).

Aston Villa netted 27 goals in their first 13 Premier League games this season, netting 3+ goals on six separate occasions - in their last 12 games, they have scored just 11 goals, failing to score more than twice in any game.

Calum Chambers starts for the Gunners, making his first league appearance of the season

Bukayo Saka (19years & 182days) is set to make his 50th Premier League appearance for Arsenal at Burnley today. He will become the second-youngest player to reach half century of league appearances for Arsenal, after Cesc Fabregas (18years & 236days). 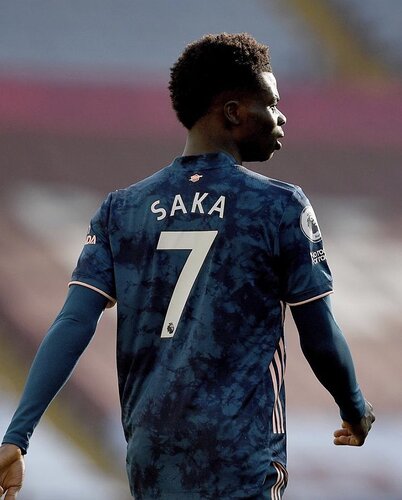 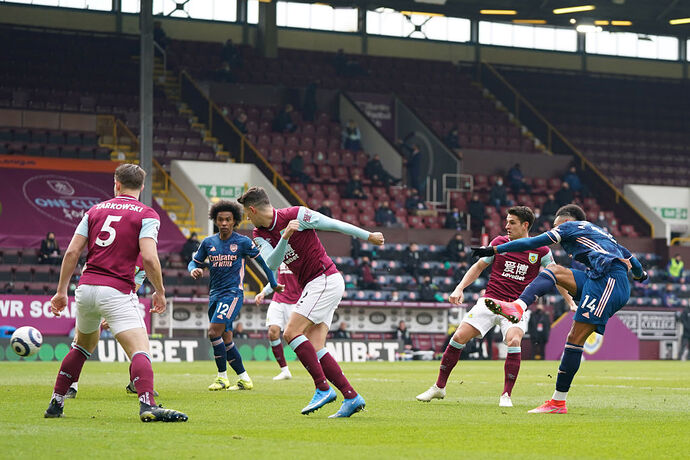 Willian has provided more assists (5) than any other Arsenal player in the Premier League this season.

He’s now provided an assist in back-to-back league games for the Gunners. 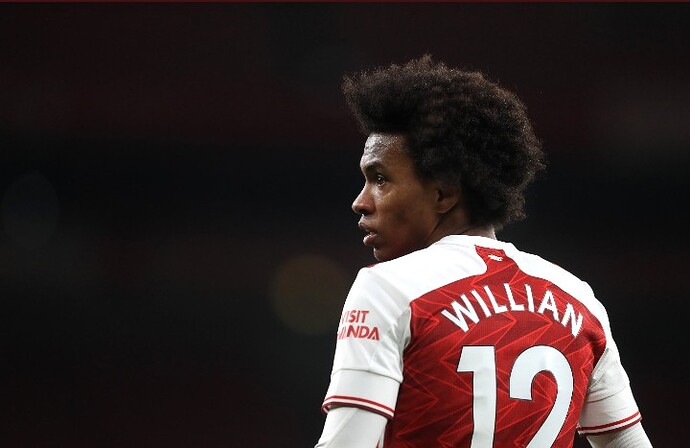 Players to score a goal and an own goal for Arsenal against a specific opponent in a single Premier League season; 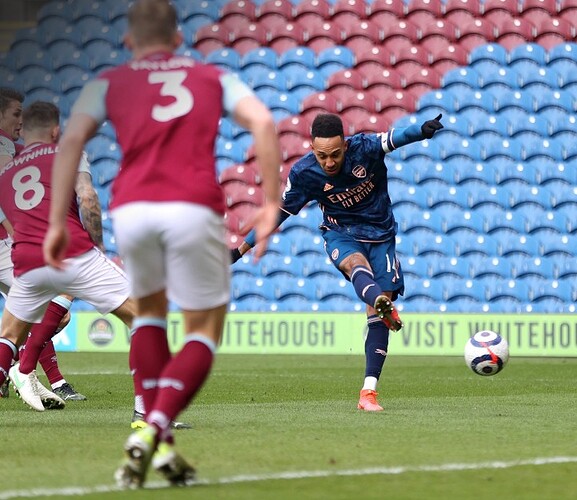 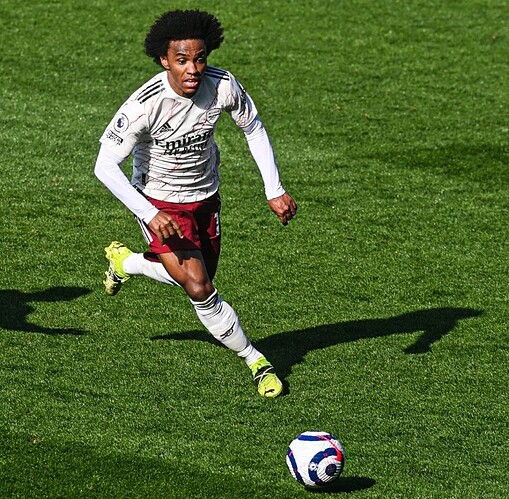