Premier League Matchday 8- Preview & Top Clashes To Watch Out For

Matchday 8 of the Premier League is packed with high action as Manchester City face Liverpool on Sunday. There are some crunchy encounters which can see the points table flip aside. Matchday 8 begins with Brighton facing Burnley. Both sides have not been in good form but Brighton is expected to emerge with the three points in this fixture. 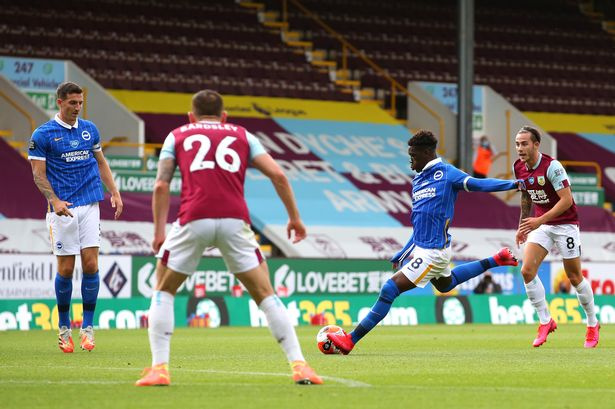 Brighton & Hove Albion come into this game on the back of a 2-1 loss to Jose Mourinho’s Tottenham Hotspur. Burnley, on the other hand, lost 3-0 to Chelsea last Saturday at Turf Moor. In 15 previous encounters between the two sides, the record is exactly even. Brighton & Hove Albion have won four games, lost four and drawn seven. Burnley are currently at the bottom of the table and Brighton are on 16th position. These 3 points will be crucial for either teams to keep the momentum alive.

The Blues, who are seventh in the league table, have turned a corner after a rather middling start to the campaign, with their performances improving vastly in both attack and defence. Frank Lampard’s men are currently on a seven-game unbeaten run in all competitions, most recently beating French outfit Rennes 3-0 in the UEFA Champions League.

How Chelsea could line up vs Sheff Utd with Abraham leading line but Havertz and Pulisic ruled out. 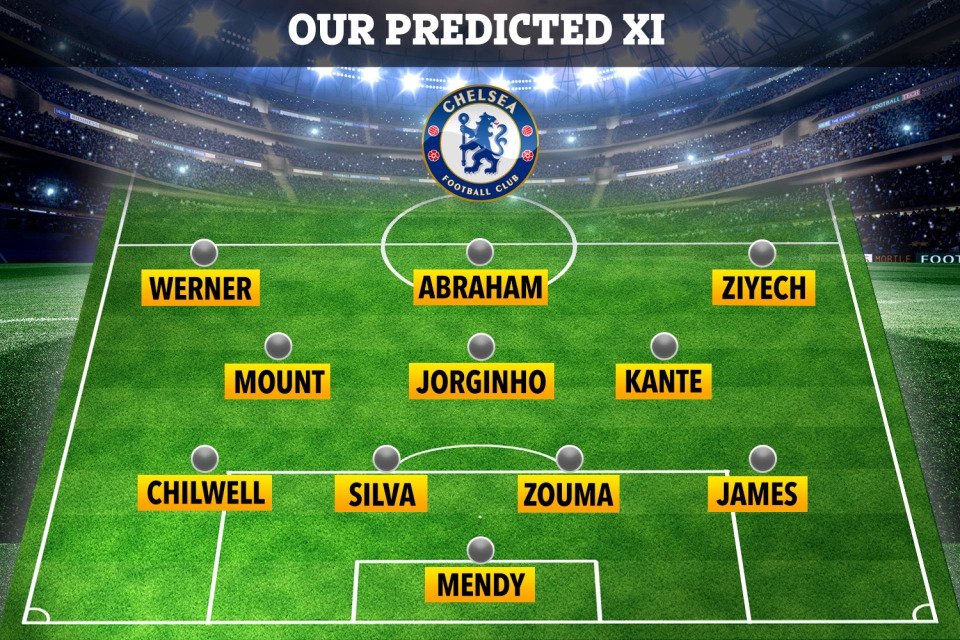 The standout Premier League fixture of gameweek eight sees Manchester City welcome champions Liverpool to the Etihad Stadium in a battle between the top two from the past two seasons.

Liverpool take on title rivals Manchester City at the Etihad on today’s Sunday afternoon in a contest that may ultimately come down to a battle between the Premier League champions’ uncharacteristically porous defence and the home side’s star-studded attack.

Jurgen Klopp’s side may have had the meanest defence in the top flight for the past two campaigns - conceding just 22 and 33 goals in 2018-19 and 2019-20 respectively - but that rock-solid back-line has evaporated this season.

Liverpool have worrying let in 15 goals in their seven Premier League games this campaign, as many as they shipped in their first 26 top-flight matches last term. Indeed, it’s the most the Reds have conceded seven games into a league campaign since 1964-65, while only newly-promoted West Brom have let in more so far this season.

Nevertheless, the English premier league current outright favorites Man City go into this showdown sitting 10th whereas Liverpool have reassumed their position at the top of the table, but only five points separate the two sides and Man City also boast a game in hand, so victory on Sunday would see them move within striking distance of their title rivals. 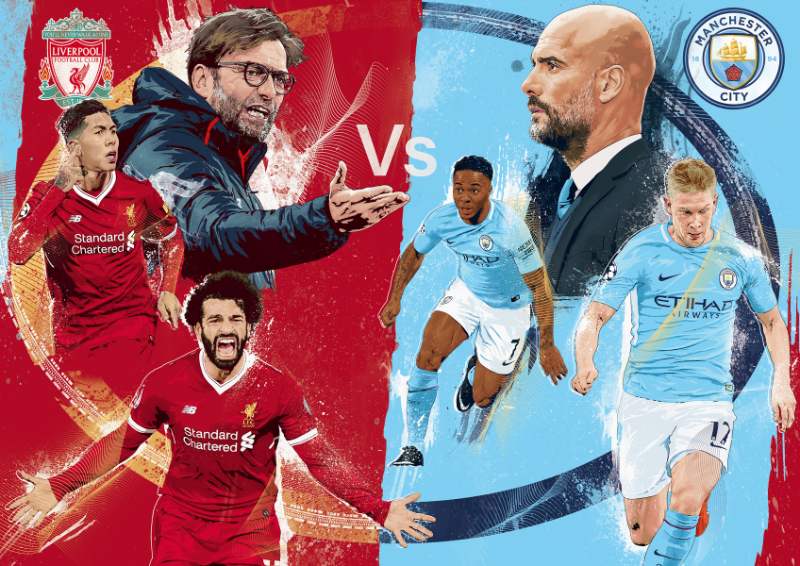 Arsenal will be hoping to extend their good run of form when they play hosts to Aston Villa on matchday eight of the 2020/21 Premier League this weekend. The gunners will be aiming to move up the rungs on the Premier League table when they lock horns with Aston Villa at the Emirates in what will be the final game of matchday eight on Sunday night.

Mikel Arteta’s men who are presently in a very good moment, having picked up three wins in three across all competitions since losing to Leicester City last month. Arsenal beat Manchester United 1-0 in the league last week, following it up with a 4-1 win over Molde in the UEFA Europa League. Ninth in the table heading into the matchday, the Gunners will be hoping to close the gap to the top.

I predict this crucial match 2-1 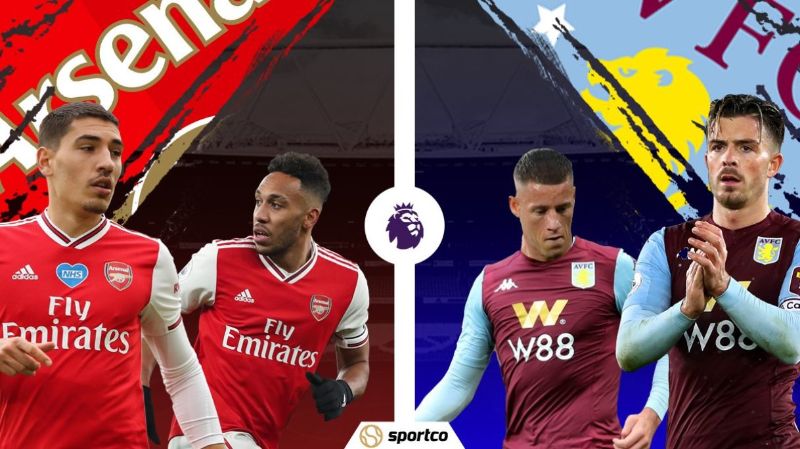 Looks like Chelsea is already seeing the ROI on their heavy transfer splurge during the summer ( £ 220 million ).

Chelsea’s 3 of the new signings, Ben Chilwell, Thiago Silva and Timo Werner were on the scoresheet. Hakim Ziyech was directly involved in 3 of the 4 goals scored and won man-of-the-match for two assists.

Timo Werner seems to be on a roll. Werner has been involved in 5 goals in his last 4 matches (4 goals, 1 assist).

With this win Chelsea moves up to 3rd on the table. Sheffield United remain rooted to the foot of the table without a win this season. 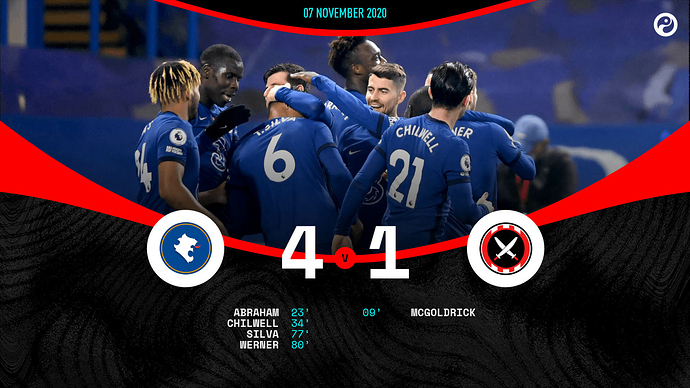 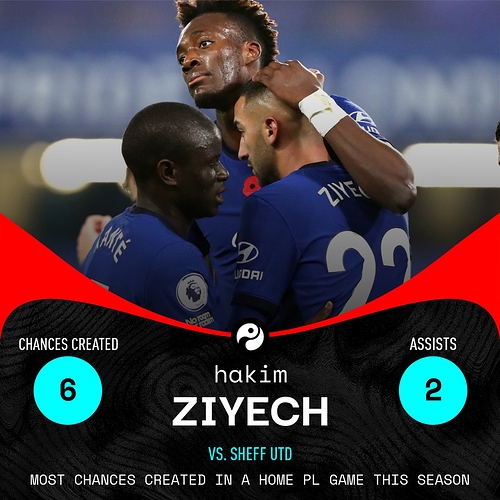 Man United eases pressure on Solskjaer with win at Everton after the midweek defeat to Istanbul Basaksehir. Bruno Fernandes scored twice and Edinson Cavani grabbed his first for the club.

Man United have won each of their last 6 away games in the Premier League, their longest streak since 1993. However, United has failed to win at home in the league this season. 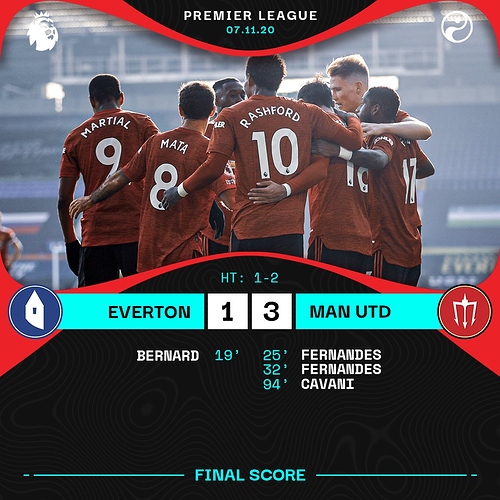 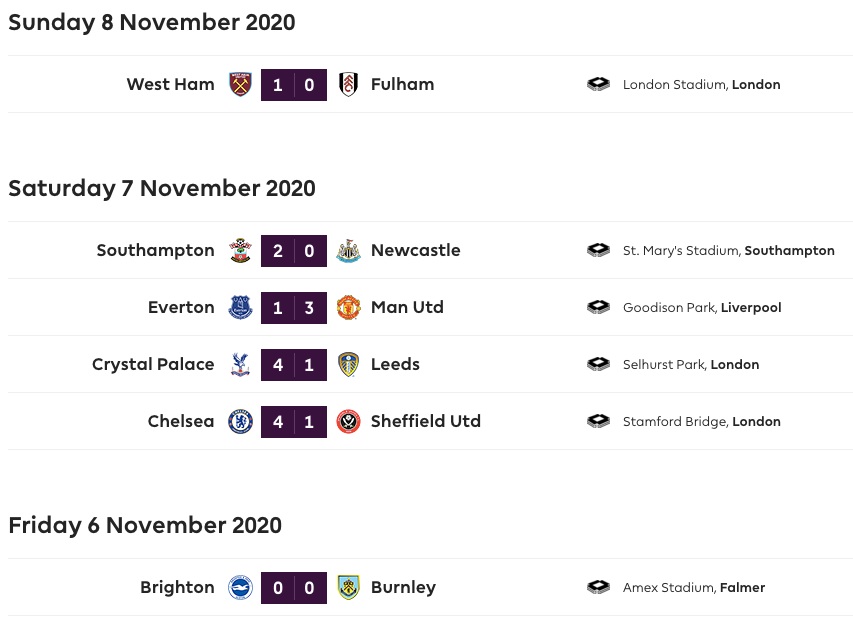 Most Premier League away wins at the Emirates Stadium: 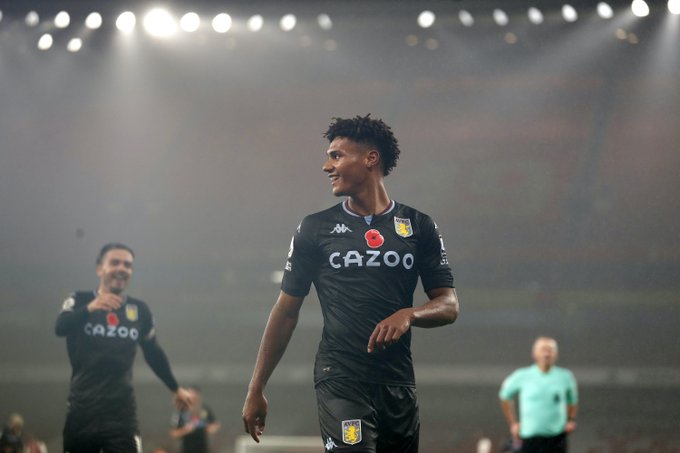 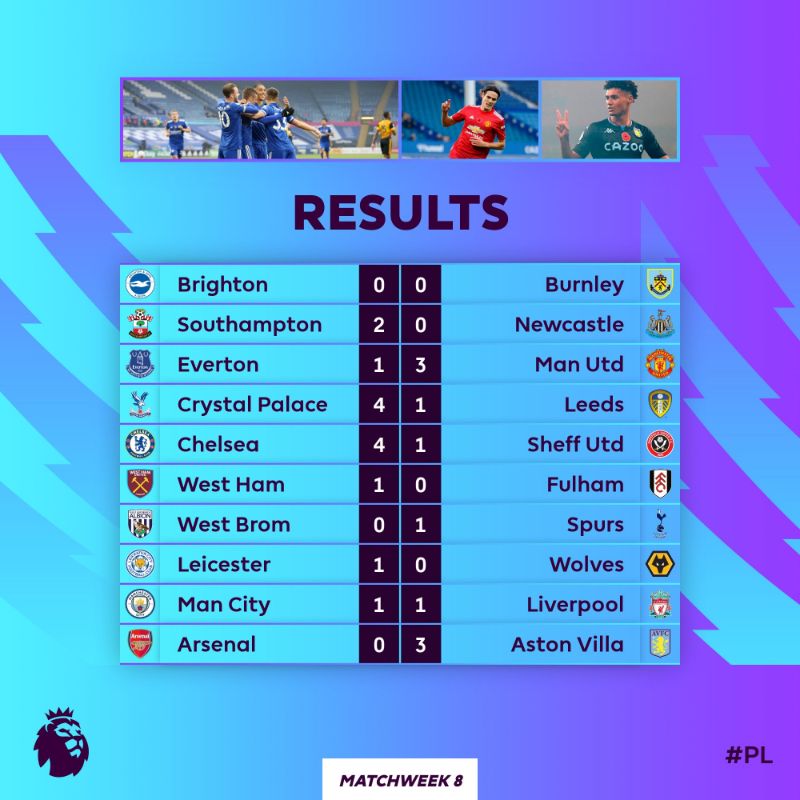 Which were the big surprises?

To me it was Arsenal’s dreadful defeat on home soil.

Ollie Watkins scored two goals as Aston Villa maintained their 100 per cent away record with a 3-0 success at Arsenal.

Villa’s win, their third on the road this campaign without conceding a goal, moves them up to 6th spot on 15 points, three clear of Arsenal in 11th.

I think Arsenal lack consistency and quality and hope they improve after the international break.