Cassius Marcellus Clay Jr (Jan17, 1942- Jun 03, 2016) also named Muhammad Ali was one of the most significant and celebrated sports figures of the 20th century and as one of the greatest boxers of all time. He is the only boxer to feature in “The Ring Magazine Fighter Of The Year’ (6 times).

Ali recorded 56 wins of which 37 came in knockout and 5 losses. The most historic matches were against Liston, Joe Frazier and George Foreman. He won a gold medal (in the light-heavyweight division) at the 1960 Rome Summer Olympic Games. He also became the first and only three-time lineal World Heavyweight Champion.

He was the proud recipient of the Presidential Citizens Medal and Presidential Medal of Freedom, which he received in 2005 by then President George W. Bush. He was inducted in the International Boxing Hall of Fame. He is even honored with a star on the Hollywood Walk of Fame at 6801 Hollywood Boulevard.

Muhammad Ali was a master of knock-out quotes. Perhaps his most famous quote was made when he was 22-year old, about to take on the world :

“Float like a butterfly, sting like a bee. The hands can’t hit what the eyes can’t see.” 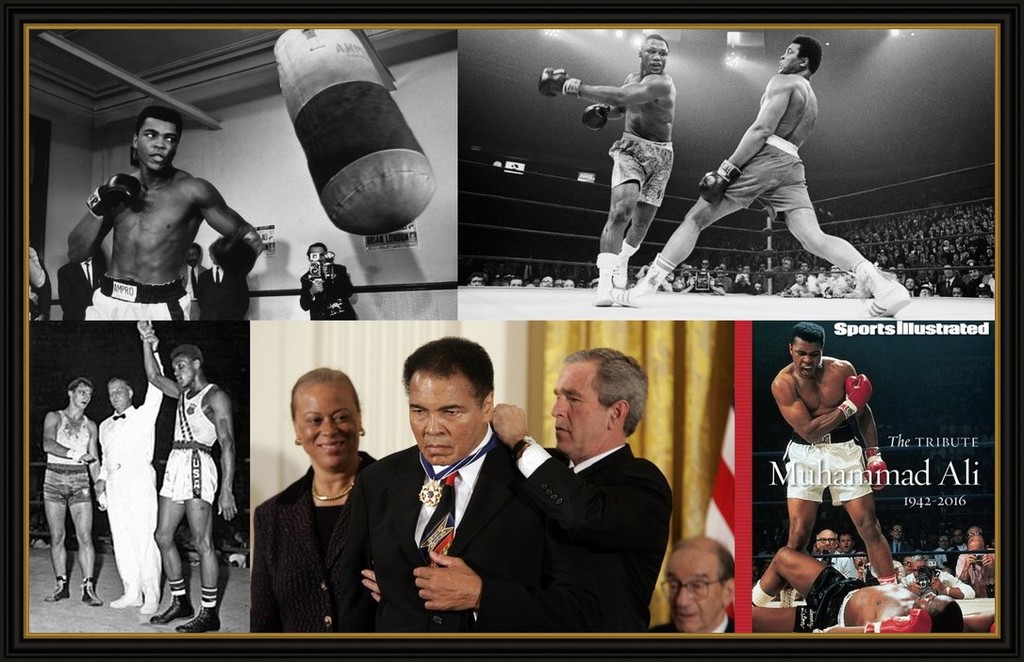 I am the greatest ,i said that even before I knew I was. - mohammed ali.

“I don’t count my sit-ups; I only start counting when it starts hurting because they’re the only ones that count.” – Muhammad Ali

Just think! He was refused to eat in Chicago restaurants and years later he was paid with millions of dollars to eat with the leaders of the world!

Among others Rocky Marciano was the greatest HW ever, then Tyson, then Lewis, then Holmes, then Johnson.

There is a counter view also ho Ali being Greatest. It’s said people put his accomplishments out of the ring in it when judging him.

Marciano was better fro some a she kept hitting hard and never tired. Some say what Ali did to Forman was incredible but no way he would’ve done that twice or in the USA. It’s also said if only Eddie Futch allowed Frazier to continue, boxing history would be very different.

One of my favourite quote of M Ali is - “The fight is won or lost far away from witnesses—behind the lines, in the gym, and out there on the road, long before I dance under those lights.”

I saw a few of his fights recently. What amazes me about him is how fast he was. i mean wow,amazing footwork with the kind of combinations of hooks and jabs he displayed were just amazing. For a example just go through this video https://www.youtube.com/watch?v=Q25FmysqXR0 i mean wow.

On this day, October 1st, Forty Four years later, THE ‘THRILLA IN MANILA’, the third, final and quite frightening boxing fight between Muhammad Ali and Joe Frazier, ought to be remembered as The Fight Too Far. It was contested in 1975 for the heavyweight championship of the world at the Philippine Coliseum in Philippines, on October 1st. Both Ali and Frazier collided like dinosaurs. Ali seemed merciless in the fight clearly dominating with his aggressive blows and counter-punching relentlessly attacking Frazier. In the 12th round, Frazier began to tire, and Ali scored several sharp blows that closed Frazier’s left eye and opened a cut over his right eye. With Frazier’s vision diminished, Ali dominated the 13th and 14th rounds. Ali won by Technical Knockout (TKO) after Frazier’s trainer, Eddie Futch, conceded the fight and refused to allow exhausted and bleeding Frazier to answer the bell for the 15th and final round, despite Frazier’s protests. Frazier’s eyes were both swollen shut.

This fight was a pivotal event for both Ali and Frazier’s pride and existence. All their vengeance was poured into the 42 minutes in which they tried to bury each other for good. Ali’s hurtful insults lingered verbally way after the bell, all the way to Joe’s grave. As Ali’s biographer Thomas Hauser recalls: “There are things that Ali said to Joe I’m sure he forgot 10 minutes later, but they cut very deep”.

An ailing Ali said afterwards that the fight “was the closest thing to dying that I know”, and, when later asked if he had viewed the fight on videotape, reportedly said, “Why would I want to go back and see Hell?”

After the fight he cited Frazier as “the greatest fighter of all times next to me.”

The bout is ranked as one of the best in the sport’s history. The fight was watched by a record global television audience of 1 billion viewers. 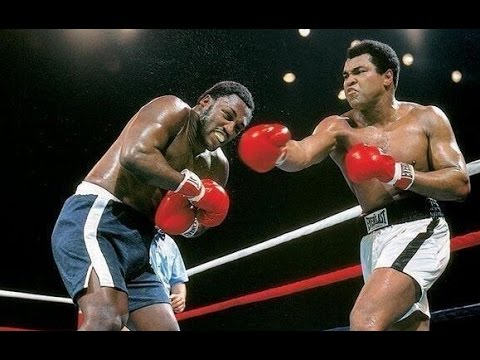 One question that probes me every time I hear the name?

Was he really that great OR it was just politics?!

I think Ali was a Champion and one of the toughest boxers of all time. His fighting spirit was insurmountable and scared his opponents even before the fight. He was no doubt a controversial figure, infamous for his badass attitude towards his opponents and for his flamboyant display of arrogance. However, the world fell in love with his unparalleled charisma and charm. He was a master of self-promotion and was very smart to use the media to his benefit.

He dared to speak his mind, one of the qualities that I personally admire. Ali refused to serve in the US Army in Vietnam war in 1967. His reasoning was that there was no need to fight for freedom in a different part of the world when the blacks in his own country were fighting for basic rights.

Ali : “My conscience won’t let me go shoot my brother, or some darker people, or some poor hungry people in the mud for big powerful America,” he said. “And shoot them for what? They never called me nigger, they never lynched me, they didn’t put no dogs on me, they didn’t rob me of my nationality, rape and kill my mother and father. … Shoot them for what? How can I shoot them poor people?"

As a result of his refusal to serve, he was stripped off the title and suspended for more than 3 years. His passport had been taken away along with his ability to make a living.

His anti-war protest and refusal to be part of US war in Vietnam cost him prime years of his career. Ali had to take up other jobs to pay the bills and help support his family, earning pennies on the dollar compared to his time in the ring. Here was a man willing to sacrifice everything for his principle. This itself speaks volumes. He put it all on the line for what he believed in.

Ali’s comeback journey to boxing stardom is equally awe inspiring after the US Supreme court unanimously overturned his conviction. His story inspired athletes and common man to stand up for equality and beyond.

Post his boxing career, he was diagnosed with Parkinson’s and despite the progression of the disease, he remained active in public life and led a very dignified life devoting much of his time to philanthropy. From a fighter to a savior, from a loudmouth to an inspiration, people around the world adore Ali for his courage and his rags to riches story.

Remembering Muhammad Ali - The King Of Boxing, On His Birth Anniversary!