🏎 Michael Schumacher - The Greatest Formula One Driver of all Time

Michael Schumacher (3 January 1969) a retired German F1 legend who has teamed up with big names like ‘Ferrari’, ‘Mercedes’, and ‘Benetton Ford’ is regarded as the most successful driver in the history of motorsport.

Nicknamed ‘The Red Baron’, Schumacher is widely regarded as one of the greatest Formula One drivers of all time. Schumacher is the only driver in history to win 7 Formula One World Championship, 5 of which he won consecutively.

He holds the record for most World Championship (7), most Grand Prix win (91), the most fastest laps (77) & the most races won in a single season (13). Schumacher won 5 consecutive drivers’ titles from 2000 to 2004, including an unprecedented 6th and 7th title.

Following the 2006 ‘Formula One’ season, he retired for a period of four years. During this period, Michael acted as an advisor to the ‘Ferrari’ team, and as assistant to CEO Jean Todt. In 2010, Michael made a comeback, this time racing for the ‘Mercedes’ team, with German racer Nico Rosberg.

On his retirement from the sport in October 2012, the official Formula One website declared Schumacher as “statistically the greatest driver the sport has ever seen”. He was replaced by Lewis Hamilton at Mercedes for the 2013 season.

In 2004, Forbes magazine listed him as the second highest paid athlete in the world and in 2005, Eurobusiness magazine identified Schumacher as the world’s first billionaire athlete. He donated $10 million as aid for the 2004 Indian Ocean earthquake. His donation had surpassed that of any other sports person, most sports leagues, many worldwide corporations and even some countries.

On December 29, 2013, Schumacher had a major accident while skiing with his son Mick, in the French Alps. He was wearing a helmet, but still had a massive fall, resulting in a serious head injury. Since then Schumacher continues the rehabilitation process in the privacy of his home in Switzerland.

From 2002-04, Michael was named the ‘Laureus World Sportsman of the Year’.

In 2006, he was felicitated with the ‘FIA Gold Medal for Motor Sport’ to commemorate his success.

The French government honoured this brilliant racer with the title of ‘Officier of Légion d’honneur’, the highest of its kind in France.

In 2014, the ‘Millenium Trophy’ was conferred upon the celebrated racer at the ‘Bambi Awards’. 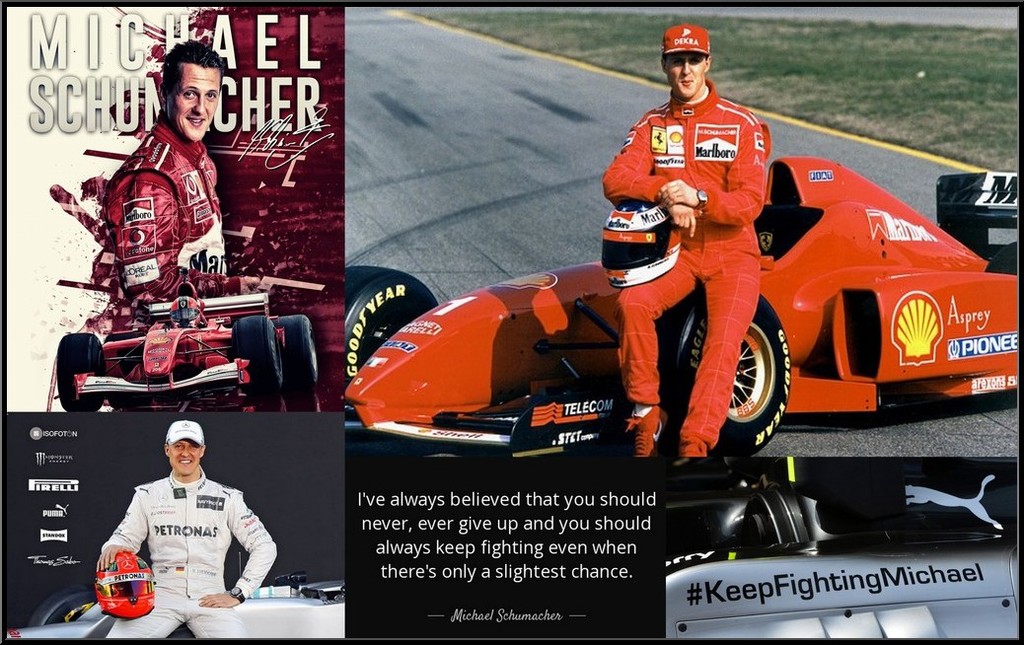 F1 will never be the same. Schumacher is the greatest racing driver of all time. He was simply phenomenal when it comes to the skill and speed.

Michael Schumacher will forever be one of the favorite F1 racing car driver and an equally great person at heart.﻿ This brilliant video compiles his memorable journey.

Hope to see him recover soon and wave at his worldwide fans.
#KeepFightingMichael﻿

No doubt Shumi is legend and capable claimant of GOAT title. But, for me, Senna is rightful claimant of the title. Reasons…

Undoubtedly, a great! But wasn’t Fangio greater? His sheer skill and continued efforts in testing F1 cars in the 50s and 60s helped shape car design a great deal, well before legends like Schumacher and Senna even arrived.

Happy Birthday to the Living Legend!

Michael Schumacher turns 51 today. Best wishes for good health and hope to see you smile your way back to F1 one more time. Update on Michael’s health : As per reports a world stem cell expert is attempting to REGENERATE MICHAEL’s BRAIN.

Schumacher is undergoing a mind-blowing stem-cell treatment using parts of his heart to regenerate his brain. It is hoped the doctor can regenerate the former F1 driver’s entire central nervous system.

It would be an astounding medical achievement if successful.

But, One thing is even if his physical brain re-created, The memories stored there can’t be re-generated. Part of damaged brain which performed control function may benefit from recreation. But, how far it can perform without the conditioning in fetus stage and lifelong training remains to be seen.

Let’s hope for the best and pray for the champ!

It will be a great medical breakthrough! Hope & Prayers are with the Champ!

An Icon, A Legend, A Fighter, A Hero : Happy 51st Birthday Michael! Tribute to my idol!