The first match proved to be anti-climatic. The second match, however, could be a cracker of the game. These two faced each other in the qualifier two last season in one of the most entertaining games of the season. The pick for today’s fantasy game could be:

Pitch Report: The Eden gardens is known for its spin-friendly wicket. Also, arguably three best limited over spinners in Rashid Khan, Kuldeep Yadav, and Sunil Narine would be donning their skills in this game. Choosing the team could be a real challenge in this game.

Team Combination:
Wicket Keeper: Dinesh Karthik is a brilliant keeper and could prove to be an exceptional finisher but i would choose Saha over him because

Batsman:
Robin Uthappa: I just like him, this is more a decision which has come out of heart than from calculations.

David Warner: Yes, coming out after a gap but for the past 4 seasons he consecutively scored more than 500 runs in every season. I expect him to do the same this season.
Kane Williamson: Very consistent. Very very consistent, a 30-40 is assured.
Shubhman Gill: Exceptional talent. anybody who saw him bat in the second qualifier last year was impressed by his composure and poise. I have a feeling that this might be his year.

All Rounder:
This is a section which I won’t even explain why I made these decisions. My choices:
Sunil Narine: I would have made him the captain but his performance has not been very good against SRH, so this could be tricky, however, I would still make him my captain
Shakib Al Hasan: Useful bowler good batsman.
Andre Russell: Just trust me on this and chose him. certain 4 overs and a few lanky blows.

Bowlers:
Rashid Khan
Kuldeep Yadav
The above two should not create any doubts.
Prasidh Krishna: Just 8 credits, will help Lockie Ferguson in the death overs. good at bowling yorkers and slow balls.

Yeah first match proved to be rather boring and a one sided affair…but this match will most probably be quite a close affair… I feel that it is going to be the bowlers who will dominate the match…So my fantasy eleven will be ;-
My Wicketkeeper would be Saha solely because he will open the batting and might take a couple of catches and stampings because of the bowling arsenal of SRH
My batsmen will be the explosive Lynn, on his day he can take on any bowling lineup…And then I have taken Warner who is making a comeback and has always been in red hot form in IPL…then I have gone for the reliant Uthappa who is again a top order batsman…
My all-rounders are the pretty obvious ones…I have taken the deadly duo of Sunil Narine who is also my captain and Andre Russell (my Vice Captain)… My final allrounder will Vijay Shankar …I somehow feel that this guy will be quite handy today’s match…
Then my bowling choices are also pretty obvious and conventional ones…I have gone with the experienced Bhuvi along with the probably the best spinners in modern day cricket that is Kuldeep and Rashid…The final slot has been taken by the young Prasidh Krishna who had a breakthrough season last year. 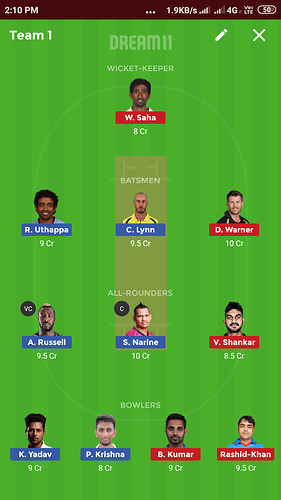 Let’s just not talk about the first match. Not a kind of opening match I expected. While this one would quite turn out to be an interesting one. They’ve faced each other in some interesting knockouts and always given us entertainment.
My fantasy team would be.
Wicket Keeper- Dinesh Karthik. He really has this one chance to prove himself for the world cup. He can bat too and given to the fact that KKR batting second he can win big matches. 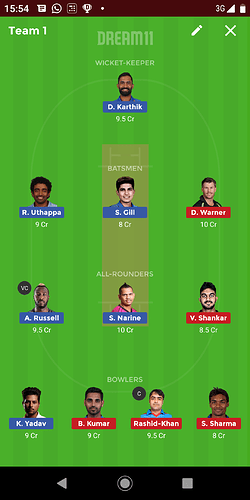 Prediction- KKR win (Only because of the home crowd)