She won 64 Grand Slam championships, more than any other player in history. She won 24 of those singles titles (11 Australian Open, 5 French Open, 3 Wimbeldon & 5 US Open titles), a record that still stands. She also won 19 women’s doubles and 21 mixed doubles titles.

In 1970, Margaret became the second woman (after Maureen Connolly in 1953) to win all the Grand Slam of tennis singles: Wimbledon, the U.S. Open, the Australian Open, and the French Open titles in the same year.

Court is one of only three players in history (all women) to have won the “Grand Slam Box Set” consisting of every senior Grand Slam title (the singles, doubles and mixed doubles).

Court, however, is the only one in tennis history to complete a Multiple Grand Slam set, twice, in all three disciplines: singles, women’s doubles and mixed doubles.

On 13 May 1973, in Ramona, California, Court lost in the Battle of the Sexes match, a heavily publicised and US–televised challenge match to a former World No. 1 male tennis player, the 55-year-old Bobby Riggs. Court who was the top-ranked women’s player at the time, lost the match 2-6, 1-6, as she did not take the match seriously considering it to be a mere exhibition match.
Four months later, Billie Jean King beat Riggs in the Battle of the Sexes match in the Houston Astrodome. The exhibition matches were considered a very significant event in developing greater recognition & respect for women’s tennis.

In 1977 Court decided to retire. She lived in Perth and opened a boutique named Peephole.

The International Tennis Hall of Fame states, “For sheer strength of performance and accomplishment there has never been a tennis player to match her”. 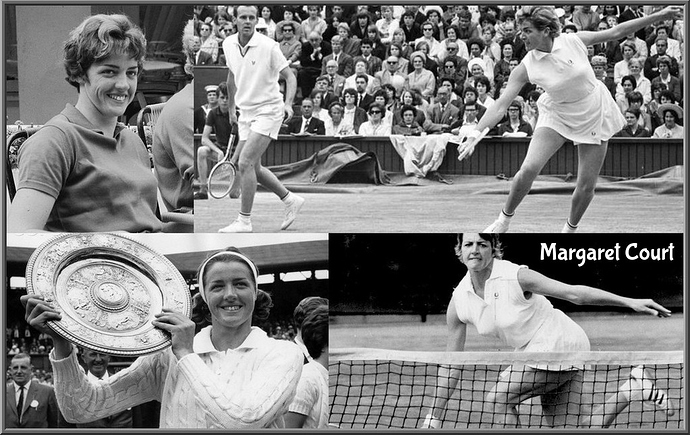 Battle of the Sexes played between Margaret Court and Bobby Riggs on Mother’s Day 1973.

Margaret Court missed out on one major achievement - A tennis player has won all grand slams four times. If Margaret Court had won one more Wimbledon title she would also be the first player to do so.

Steffi Graf is the only player to acheieve this. If Serena Williams wins the French Open once more, she’ll join Graf.

@Yogesh Actually Margaret Court has won the Grand slam in 1970.

In 1970, Margaret became the second woman (after Maureen Connolly in 1953) to win all the Grand Slam of tennis singles: Wimbledon, the U.S. Open, the Australian Open, and the French Open titles in the same year.

I am talking about each grand slam at least 4 times. Court has 3 Wimbledon.