Lionel Messi has reportedly called off contract renewal talks with Barcelona and is planning to leave the club when his contract expires at the end of next season.

According to Cadena SER, the captain is angry and frustrated at the club and has not intention currently of continuing past 2021.

In January he hit out at sporting director Eric Abidal, who he said had implied players had led to Valverde being sacked.

In a February interview with newspaper Mundo Deportivo, he declared the team were not good enough to win this season’s Champions League.

Messi is also said to be “frustrated about the squad’s lack of quality” and has apparently already told some of his team-mates about his decision.

This is shocking and could have been totally unbelievable a few days back. Barca would do anything to keep him.

OR, Is it just a pressure tactic in power struggle?

There has been enough speculations on this before too. But unlike any player, Messi if at all is making plans to not renew the contract next summer then he will retire as the greatest legend in FC Barcelona history. The relationship with the management has fallen apart with players and not only Messi. Barca not lifting any major trophy this season has been haunting him during his final years. MESSI leaving FC Barcelona and joining any other club would be last thing on earth that I would want to see.

Wow!! That definitely is a shocking news but kind of expected given the dynamics at Camp Nou over the past year or so.

It’s just a weird inkling that I mentioned my concern not too long ago.

It will be interesting to see the impact of Messi’s presence in the League - I am sure a matter of great concern for the League management anticipating Messi’s exit / retirement from the league in the near future.

I am sure it must be a heart-wrenching decision for Messi to even be at this point. For 17 long years Messi and Barca have been synonymous. Hope the management figure out a way to hold on to Messi and Barca fans get to see more of Messi at the club!

Time to move to Man City!

Messi thrived under Guardiola at Barca between 2008 and 2012. Together they won 3 La Liga titles, 2 Champions League and 2 Club World Cups. Lionel Messi set for EXIT! Have Barcelona reached a point of no return? | ESPN FC

As per reports, Messi would like to finish his career by playing for Newell’s Old Boys – the Argentine club he was signed from by Barcelona as a schoolboy.

Lionel Messi would never leave FC Barcelona and join any other club. If at all this happens we can possibly see Messi reuniting with Pep or play alongside Cristiano Ronaldo at Juventus. 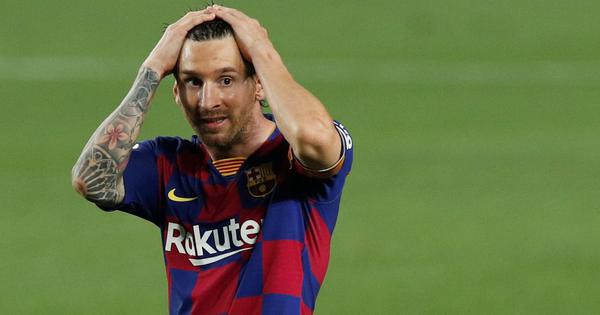 With Lionel Messi’s future in doubt, Barcelona’s serial mismanagement is...

The Argentine is frustrated with the direction in which the Catalan club is headed and has refused talks on an extension of his contract that ends in 2021.