Matchday 9 kicks off tonight as Jamshedpur FC locks horns with Bengaluru FC as last 3 matches of 2020 are being played.

Bengaluru FC and Jamshedpur FC will face each other in their last match of the year in the Indian Super League (ISL).

Bengaluru FC are in a comfortable position on the ISL table. With twelve points from seven matches, the Blues have only Mumbai City FC and ATK Mohun Bagan above them.

They come into this match on the back of a defeat against the Mariners, where they lost courtesy of a solitary goal by David Williams.

This match will be important for Carles Cuadrat and his men if they wish to remain in contention for the top position in this season’s ISL.

Jamshedpur FC’s inconsistent run is starting to prove detrimental for Owen Coyle’s team. Overreliance on Nerijus Valskis is hurting the team with other players not finding the back of the net regularly.

This match will thus be important for them as it could potentially take Jamshedpur closer to the top four. 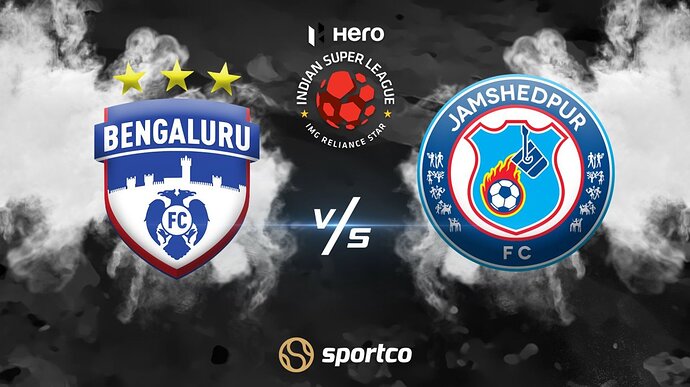 Bengaluru FC and Jamshedpur FC have met on six occasions so far. While the two teams are tied at two wins apiece, 2 matches ended in a draw. 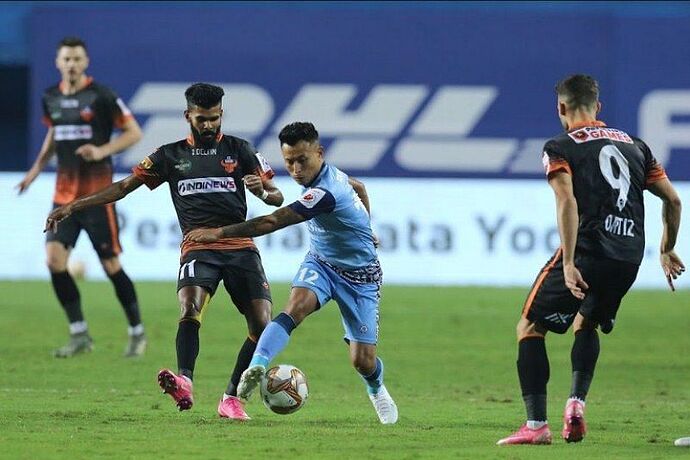 There have been 15 goals scored in the last 6 encounters between Bengaluru FC & Jamshedpur FC!

How many goals are you expecting to see tonight? 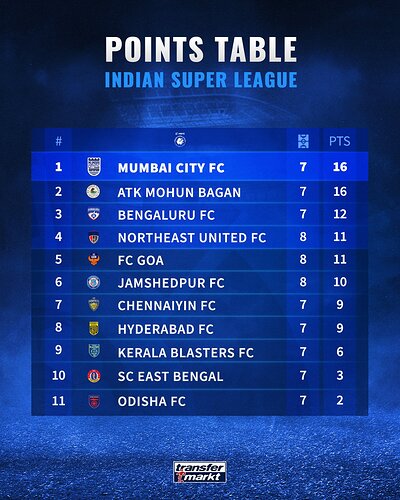 The Dutch🇳🇱 midfielder officially signs for Hyderabad FC until the end of 2020-21 season. 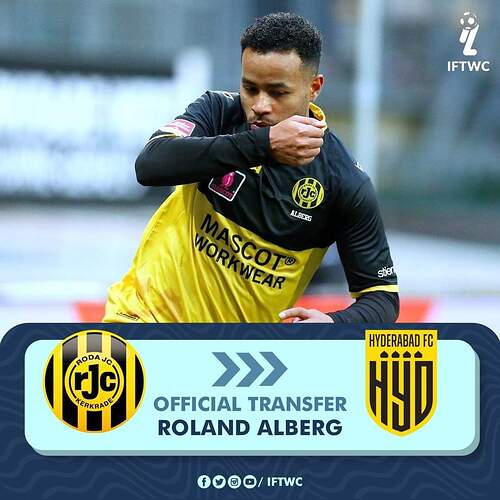 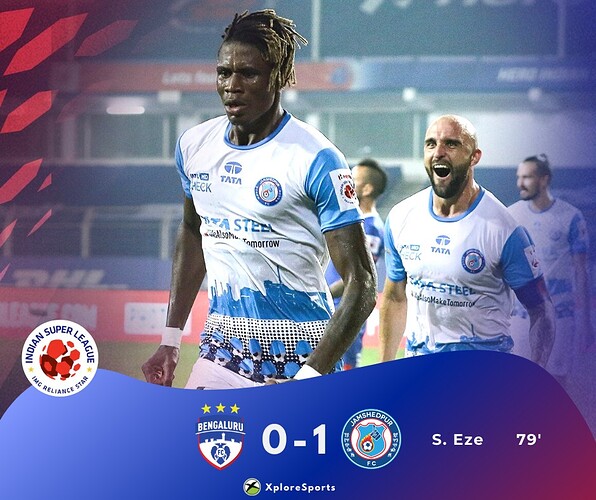 Jamshedpur defeats the Blues to go to the 3rd place in the ISL 2020-21 points table. Stephen Eze’s diving header in the second half remained the difference as Bengaluru FC were left to rue their missed chances. Jamshedpur had a goal unfairly ruled out in their previous game but they get this one. 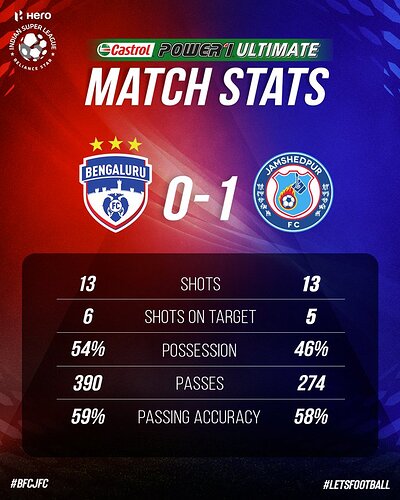 Rehenesh TP receives the Hero of the Match award!
Rehenesh pulled out four top draw saves to help his team go through this one. 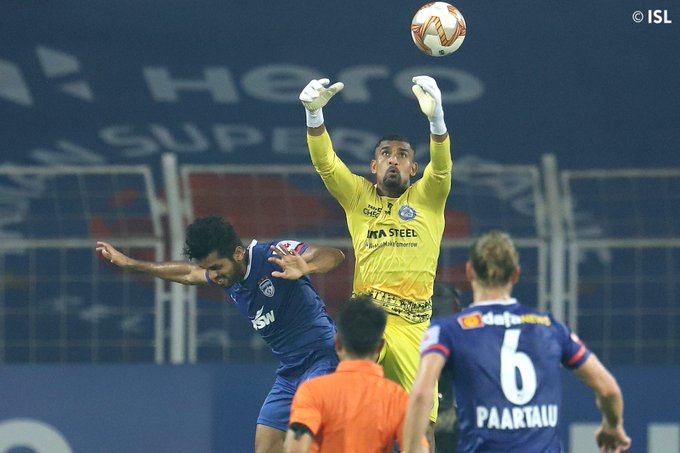 DHL Winning Pass of the Match - Aniket Jadhav
For delivering the pass that led to the match-winning goal. 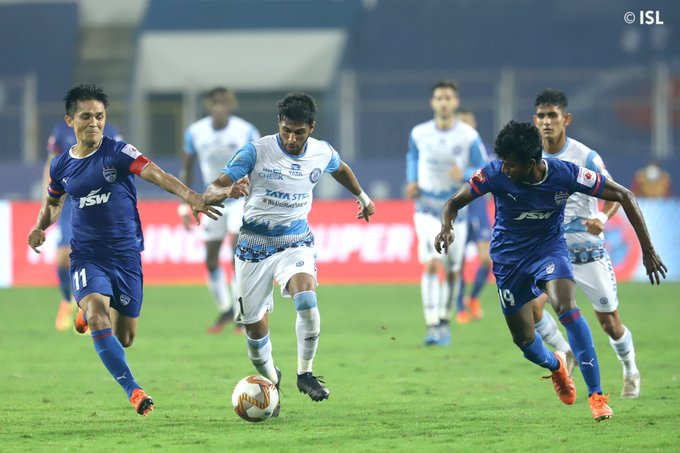 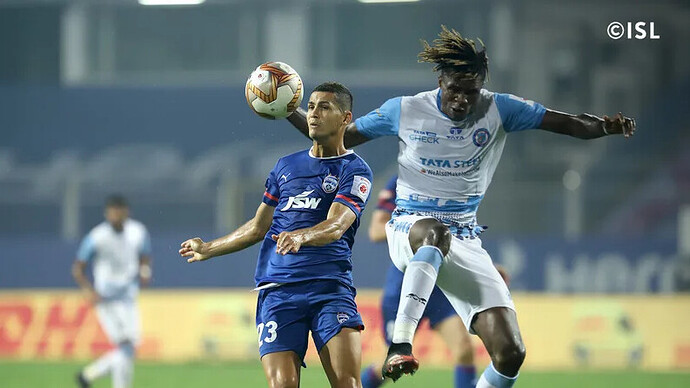 Jamshedpur FC came out on top in a hard-fought contest against Bengaluru FC at the Fatorda Stadium. Despite some chances, both sides headed into the break as they started. With 11 minutes remaining on the clock Stephen Eze’s third goal of the season ensured that Owen Coyle’s side would walk away with all three points to end 2020 on a winning note! 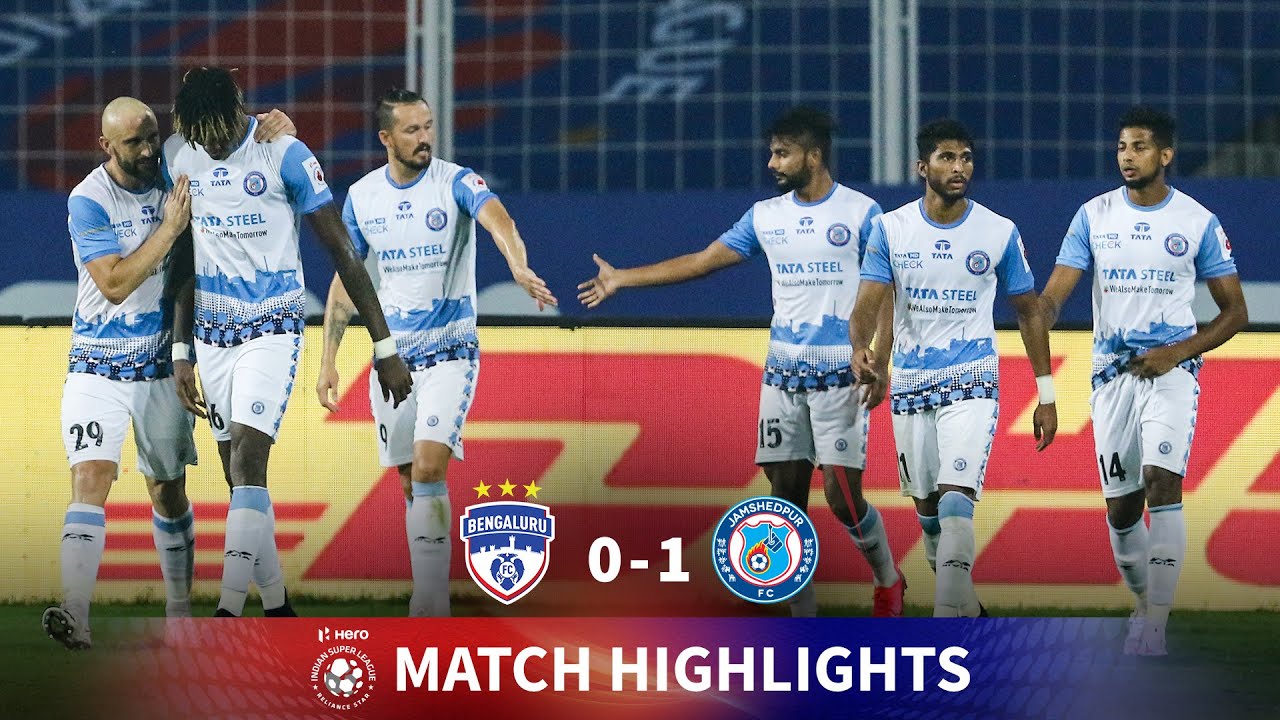 Rehenesh TP receives the Hero of the Match award! 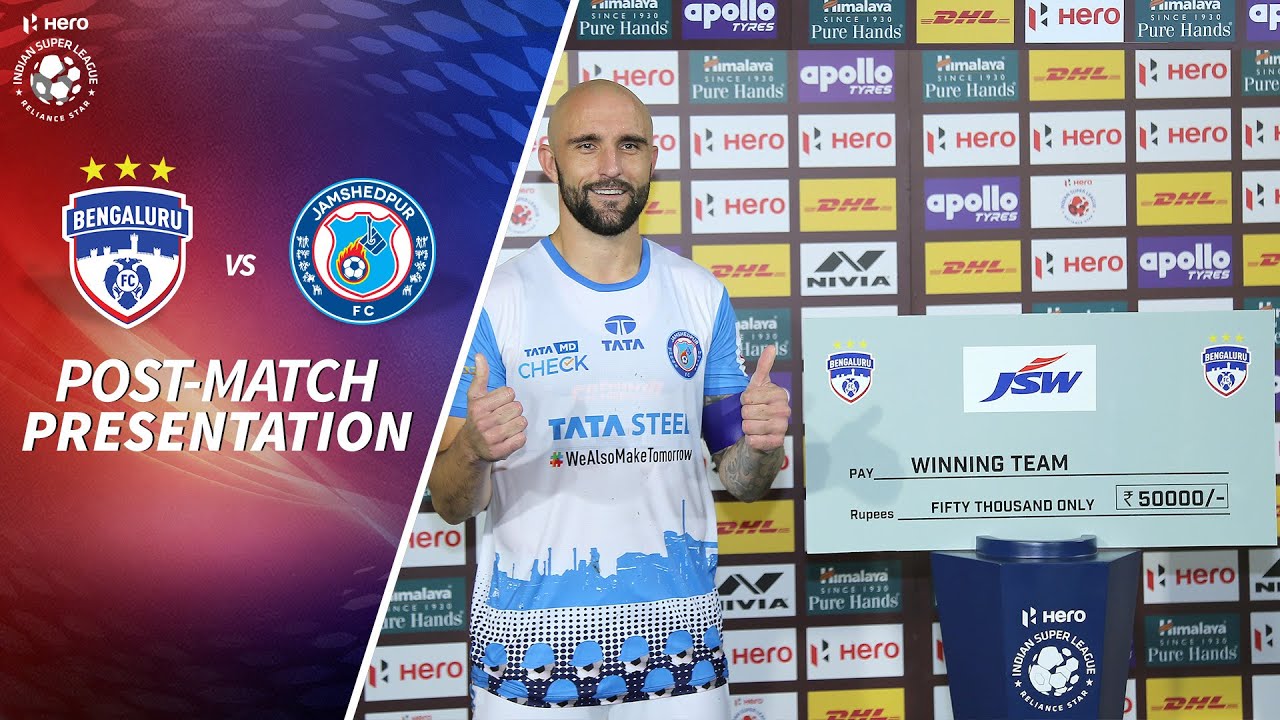 This match is going to be a competitive one. Chennai needs to focus on their defense a bit. Attacking is good from their side, crivellaro and thapa are two kye mid field player they have got. Wing play from changte was very impressive in the last match against SCEB.

For ATKMB I just can’t predict Habas’s move. Any one hardly can. But for this team counter attacking football can be one option. Pressing is expected to be high on the opponent defense.

Chennaiyin FC face a tough challenge when they take on ATK Mohun Bagan in the Indian Super League on Tuesday.

ATK Mohun Bagan are living up to the expectations as they are shoulder-to-shoulder with Mumbai City FC in the ISL points table. They are just behind the Islanders on goal-difference and have shown why they are one of the strongest teams this season.

They have lost only one match out of seven and could potentially keep it this way after their clash against Chennaiyin FC. 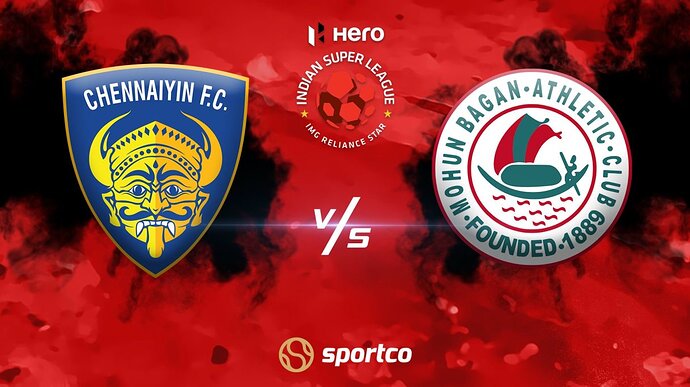 As per mutual agreement, Ankit Mukherjee and the club have decided to part ways. 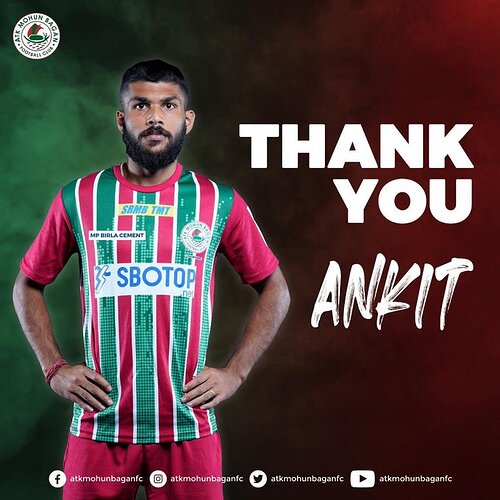 Nongdamba Naorem will return to the Green and Maroon as ATK Mohun Bagan transfer him from Kerala Blasters. As part of the swap deal, Subha Ghosh will go the other way. 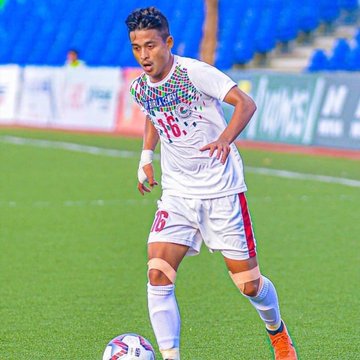 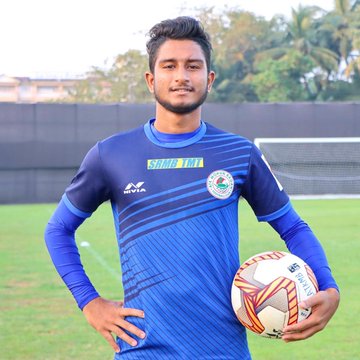 Beautiful game of football, really anything can happen.

Arindam had done 2 very important save to maintain the clean sheet. Very much aggressive crivellaro . Changte was not that much effective to day.

TIRI, Oh my my. This player is like magic he can sense the like anything. Very much impressive.

Talking about silvestra ,he was not playing football. He actually was playing American football. Constantly tripping ATKMB players from behind.

Poor decision of ref. continues Devid Williams was tackled from behind in the box that was a sure shot penalty.

However great game of football. 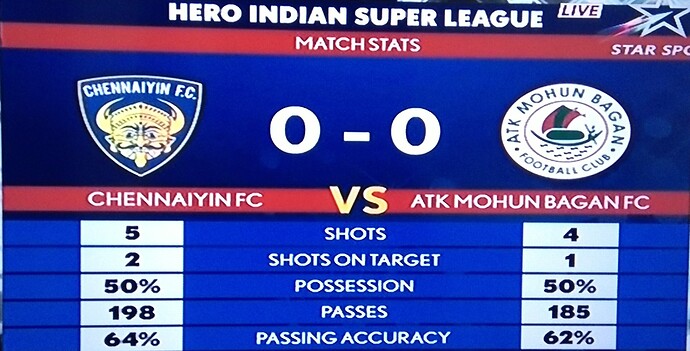 Chennaiyin and ATK Mohun Bagan end 2020 with a point apiece!

Hero of the Match Arindam Bhattacharja After the Match 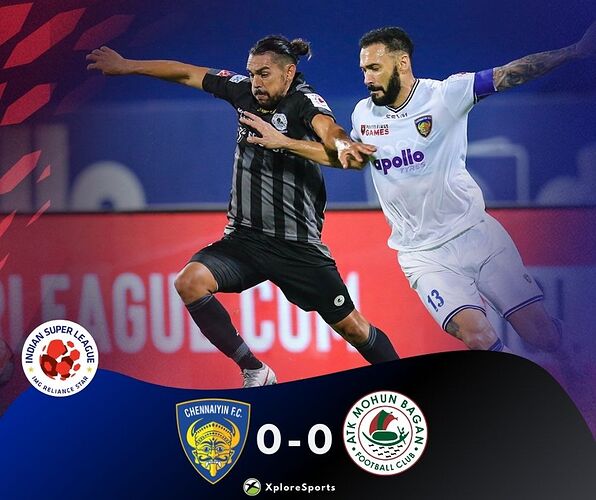 ATKMB-CFC-OC940×788 99.6 KB
ATK Mohun Bagan go top of the table but could muster only a single shot on goal while Chennaiyin FC had seven. Chennaiyin FC went hard in the second half and had a number of shots on goal but ATKMB’s goalkeeper Arindam Bhattacharja was at his best and kept his sixth clean sheet in eight games. 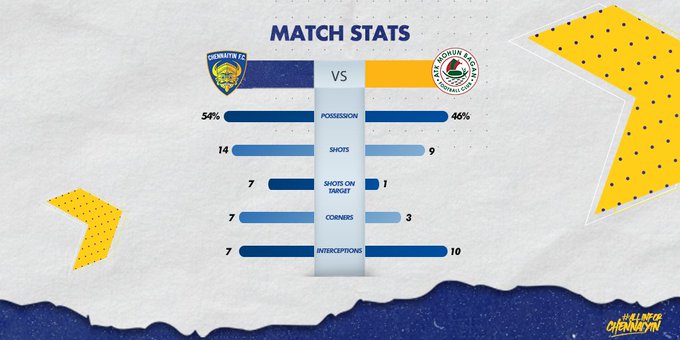 May be the result is ok. No one deserves a loss today.
But if the penalty was given the scoreline would have been 1-0.

Introduction of prabir das could have been earlier. Arindam was again brilliant in 2nd half. Well deserving Hero of the match.

Sipovic was again briliant in this match. Thapa was a bit off colour. Hoping that the injury of crivellaro was not serious.

In case of ATKMB the mid field need to be compacted more. This year wing play is becoming a problem. The need to address the fact in the transfer window.

Talking about prediction, yes I was not correct but it really could have happened if the ref was good. 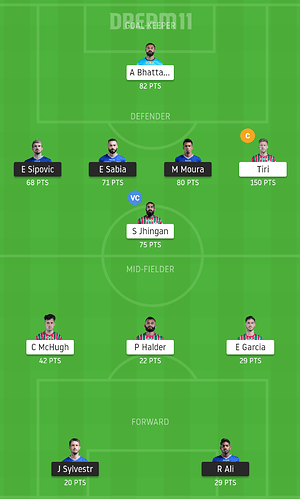 "I just watched the statistics and we had more ball possession and seven shots on target but we didn’t score. But I think I should be happy with my team’s performance and they were playing after two days against a great team. Must compliment ATKMB as well as it was a good football game and fans must have enjoyed. We could have finished the year with a victory but if the goalkeeper from the opposition gets the best player it tells the story. But tactically, it was a great game from my team and they understood what I wanted. It was more European tactically than Indian.

"Sometimes you see two teams playing like this, you can be satisfied with the football. The way one keeps the ball, how one has to move with the partner, all of that was important today. I must be fair, a draw was more or less a real result.

“Our training centre is not very modern but I am putting a lot of lines. If the ball is in the opposition’s half, how we have to move in the defence. I make the pitch very tight. Even if we lose the ball, we played two systems today, we played 4-2-4 and then 4-2-3-1 and 4-3-3 and I told Sylvestr to not waste too much time. I told in the second half that if we leave ATKMB to come and we have to manage the game to our strengths. The shoot from Chhangte was really what we did in training. You have to cover many spaces, and young Indian players understand how important it is. I tell them ‘don’t shoot out, pass and wait’. That was more or less our tactic and nearly led us to victory but we got just a point.”