IPL 2021 is well and truly ON. teams have started juggling their squads and Budget. Teams have started to discard players to reduce budget or make way for fresh talents they are eying in upcoming auctions. Next auction is going to happen in February in all it’s likelihood. 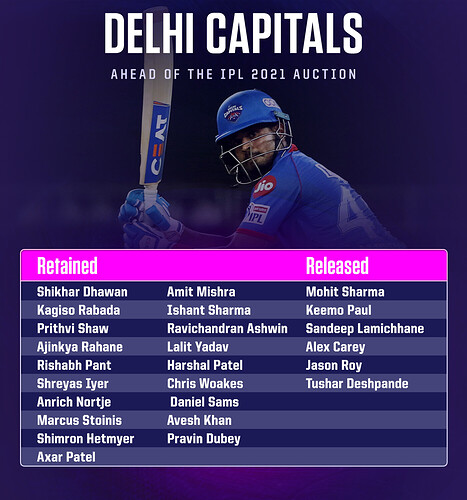 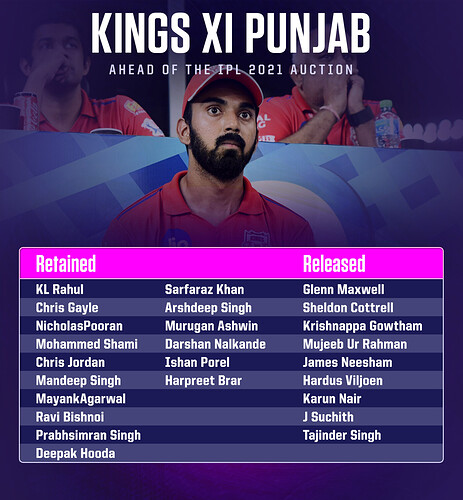 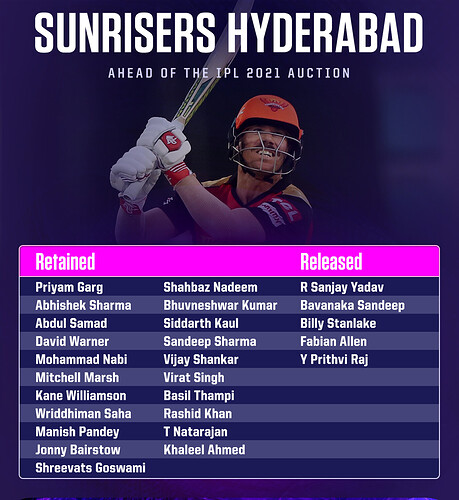 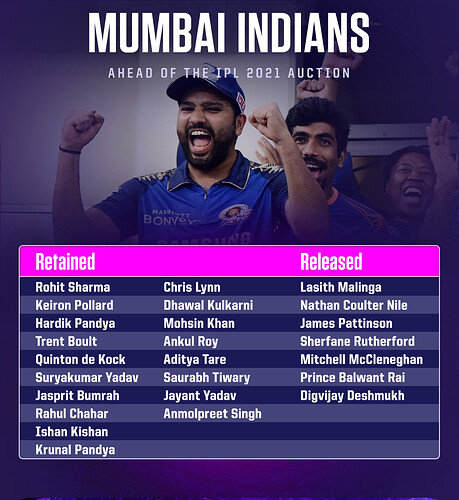 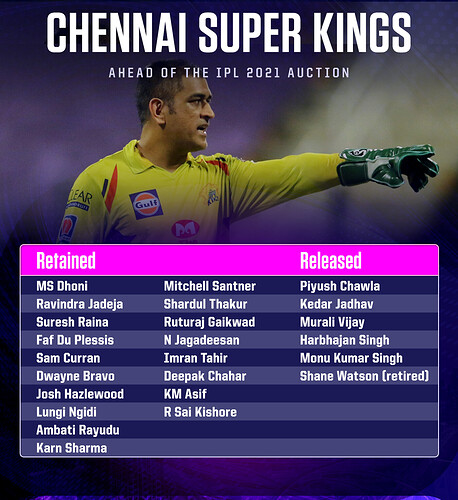 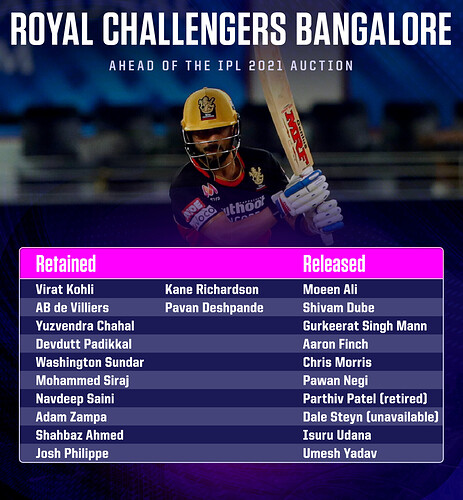 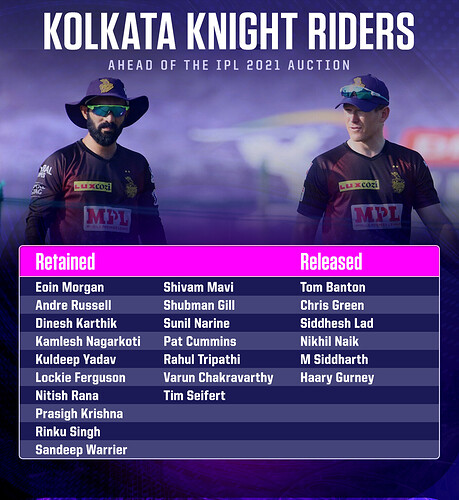 RR have announced that Samson will be their Captain. RR have also released Smith.

In a fresh signing, they’ve appointed Kumar Sangakkara as their team director.

Robin Uthappa joins CSK from RR in all cash-deal 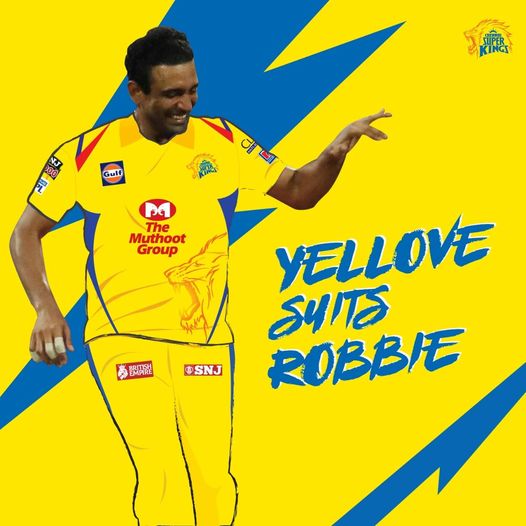 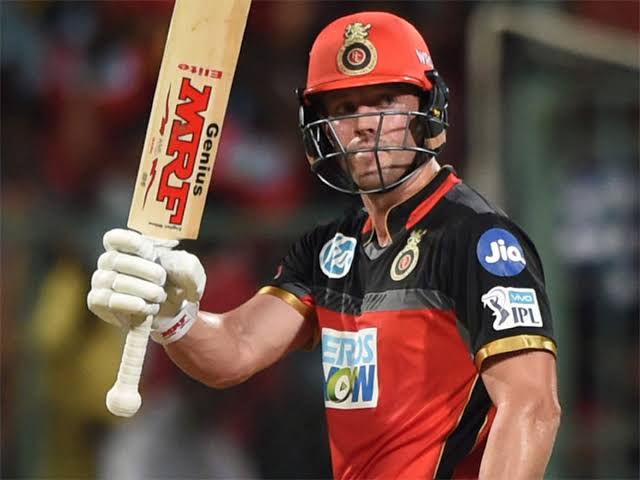 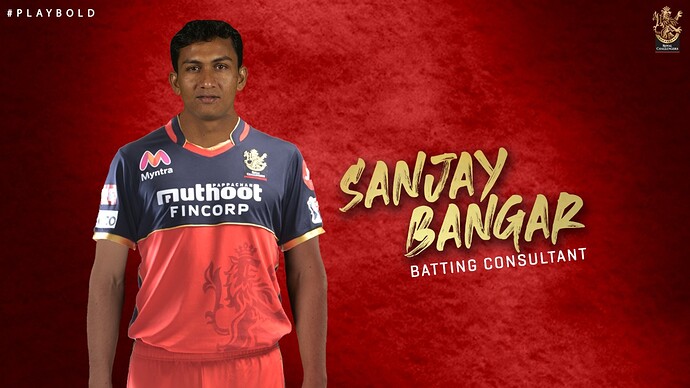 Kings XI Punjab have announced the unveiling of a new brand identity on the eve of the IPL 2021 players auction.

The Indian Premier League franchise have been renamed as ‘Punjab Kings’ and will be known by that name heading into IPL 2021.

The Preity Zinta co-owned franchise also unveiled a new logo for the team for the upcoming edition of the tournament. “Through the renewed identity, the spirit of Punjab is coming to light, infusing vigor and vibrancy while maintaining the long legacy through the motif, lion,” the franchise said. 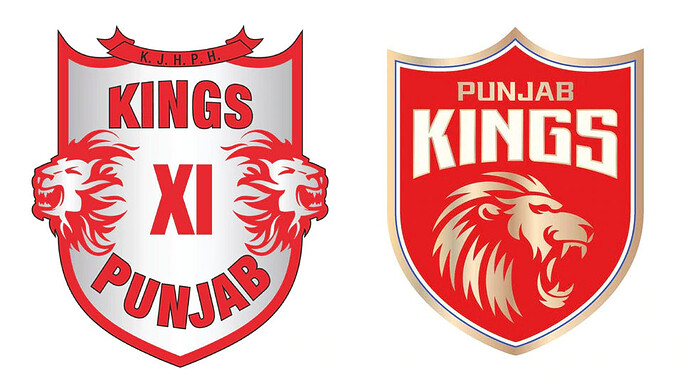 The IPL mini-auction 2021 is expected to see a lot of action from the eight franchise owners today afternoon (from 3 pm onwards) at Chennai’s ITC Grand Chola Hotel.

The auction will decide on the lucky players among 292 short-listed, which includes 164 Indians. It is likely to witness a transaction close to Rs 200 crore, but all eyes will be on Punjab Kings, which carries the fattest wallet of them all – Rs 53.20 crore.

In the IPL, a team can only have a maximum of 25 players in their squad with a cap of not more than eight overseas players. And no franchise can spend beyond the highest limit of Rs 85 crore. 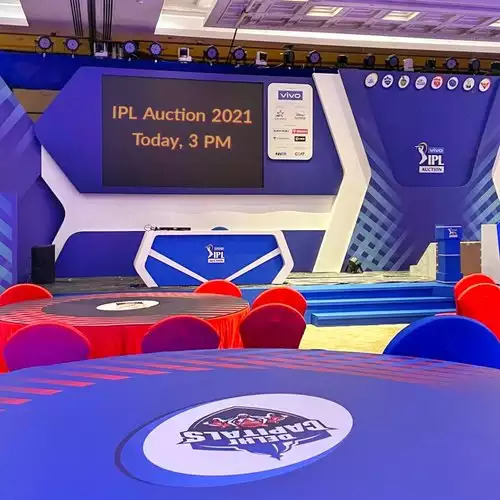 PUNJAB KINGS will go into the auction with the biggest purse available - Rs 53.20 crore 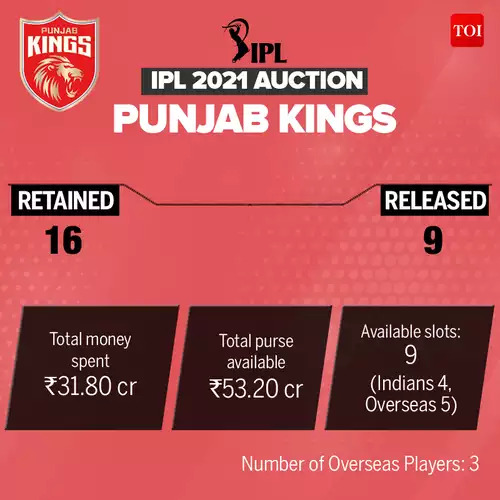 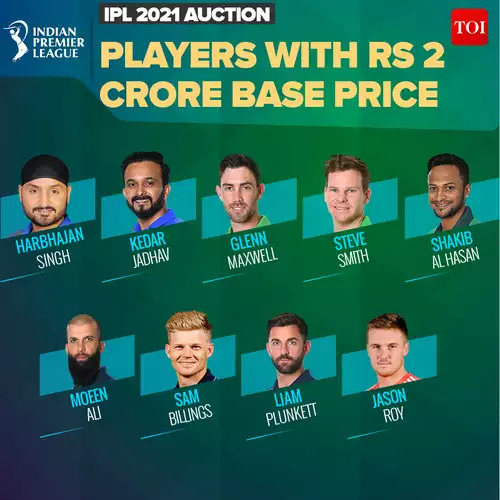 With the withdrawal of Mark Wood, the number of total players going under the hammer is 291

A total of 291 players have been enlisted for the shortened auctions - 164 of them Indian and 124 overseas. There will also be three associate players in the auction. 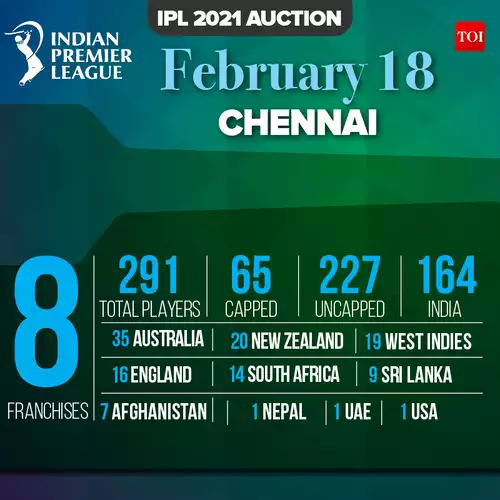 DELHI CAPITALS: The Delhi-based franchisee has Rs 13.40 cr in their purse 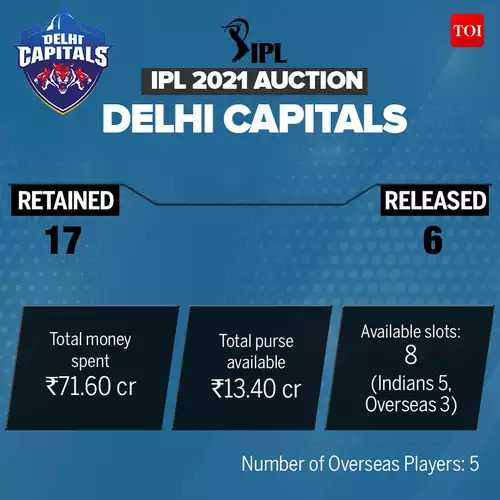 MUMBAI INDIANS: The five-time title holders will go into the IPL 2021 Auction with Rs. 15.35 cr in their pocket 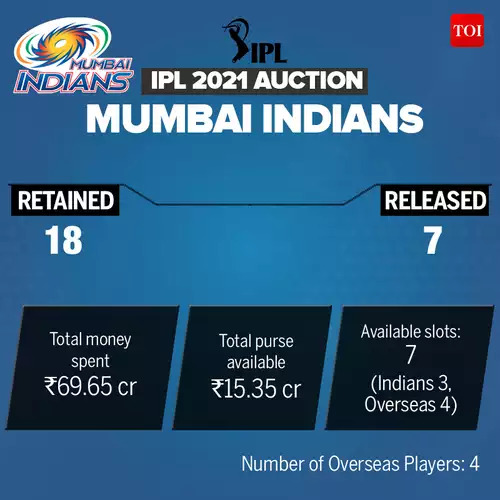 SUNRISERS HYDERABAD: The Organge Army will look to bolster their squad with Rs. 10.75 cr in their purse. 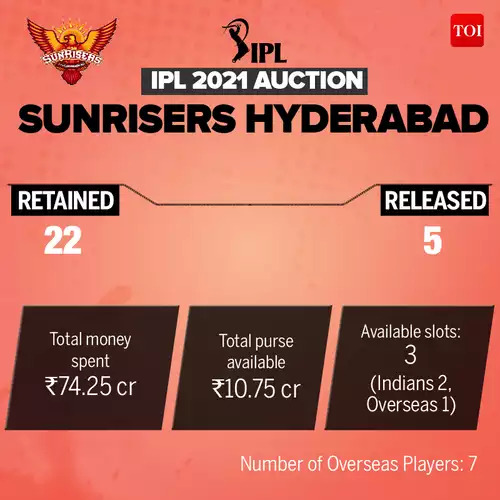 KOLKATA KNIGHT RIDERS: The two-time champions have Rs 10.75 cr in their purse 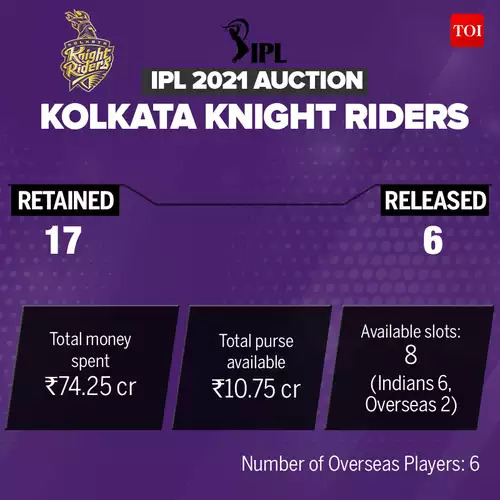 Chennai Super Kings are ready for the auction with Rs. 19.90 cr 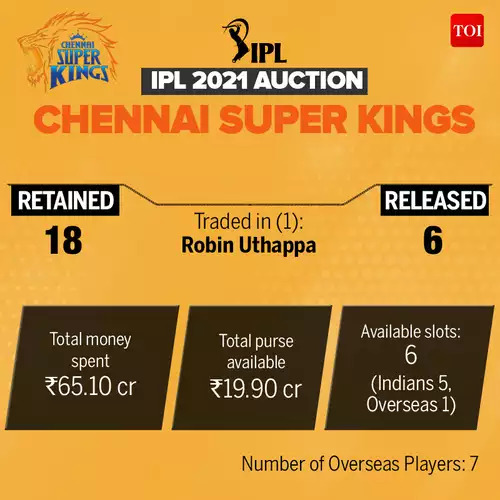 RAJASTHAN ROYALS HAVE Rs 34.85 crore in their purse 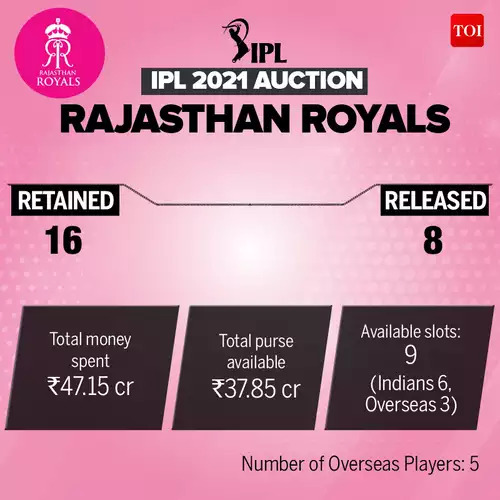 ROYAL CHALLENGERS BANGALORE will go into the auction with Rs 35.90 crore in their purse 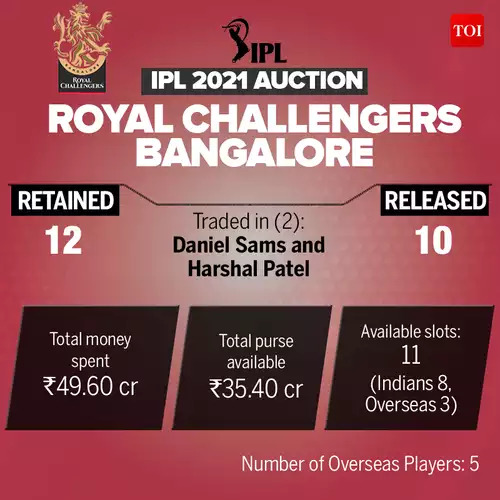 Who Stands Where and What Teams Want 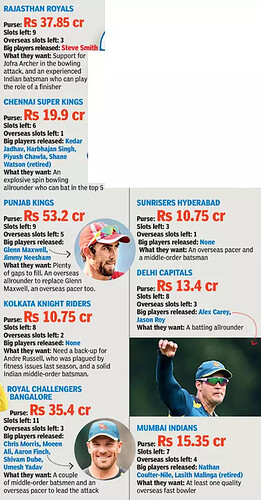