Mumbai Indians (MI) will square off against Sunrisers Hyderabad (SRH) at the Sharjah Cricket Stadium as we head into the second double-header day in the Dream11 IPL.

MI started their campaign with a loss against Chennai Super Kings. But bounced back in style, beating Kolkata Knight Riders (KKR) in their second game. While they came tantalisingly close to sealing a stunning win in their third game, Royal Challengers Bangalore (RCB) beat MI in a Super Over. MI, though, registered a comprehensive win against Kings XI Punjab (KXIP) to return to winning ways.

Meanwhile, SRH come into this game on the back of two successive wins and will be keen to complete a hat-trick of wins. While SRH lost their first two games – against RCB and KKR, they defeated Delhi Capitals (DC) and CSK on the bounce to add four points to their account.

With both the teams looking to register their third win of the season and the game is to be played in Sharjah – which has turned out to be a batsman’s paradise – we are in for an entertaining contest.

MI and SRH have faced each other 14 times in the IPL and they currently share the honours with seven victories apiece.

The recent form guide of the two teams, however, suggests that SRH has had the upper hand. In the previous five encounters, the “Orange Army” has won three matches, while the Mumbai-based side has only won two. 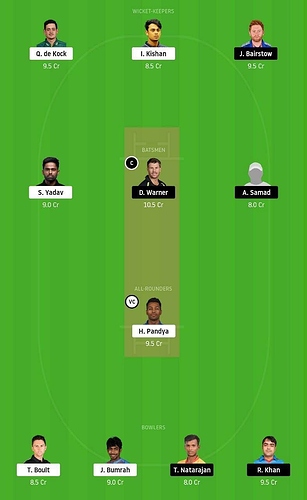 Bhuvneshwar Kumar suffered an injury against the Super Kings. If he fails to recover in time, the Sunrisers have the option of bringing in Sandeep Sharma.

Stats for this match

MI had a comprehensive two wins, SRH had a tough battles where they came out on top. This may be counted as positive for SRH, as it has made them battle hardened.

Another major contrast is in their lower orders. MI has most fearsome and experienced finishers in Pollard and Hardik. While SRH relies on greenhorns like Garg, Abhishek and Samad. They have solid top 4 though. MI’s top order hasn’t been that convincing.

I would say SRH would do fine to move one of the openers to 3, Send Garg to open, Move Pandey to 5/6 to give solidity to lower order.

Here is my team for the day! 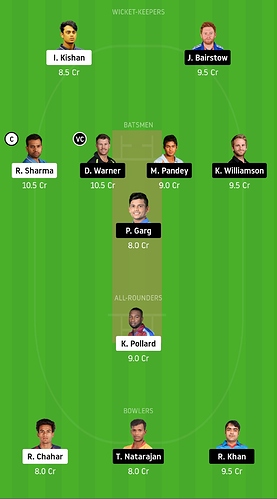 MI go to the top of the table after defeating SRH by 34-runs.

After winning the toss, MI opted to bat first and posted 208/5 at the end of 20 overs. Quinton de Kock’s 67-run knock established the base of the innings early on, before Kieron Pollard (25*) and Krunal Pandya (20*) ravaged the Hyderabad bowlers towards the end.

In their chase, SRH started well through their openers but after Manish Pandey (30) got dismissed on 94/2, their innings crumbled under pressure. David Warner’s brave 60-run knock went to waste in the end as SRH ended on 174/7.

Trent Boult is the Man of the Match! 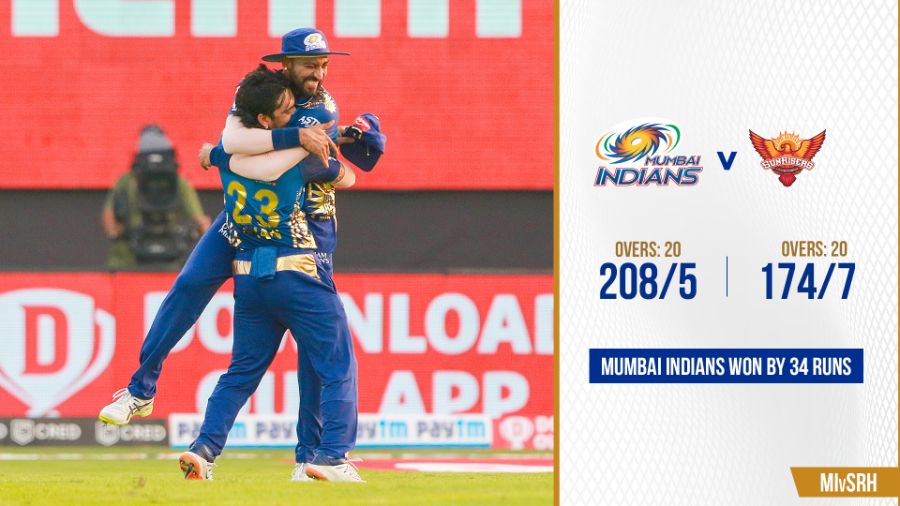 Pattinson second spell where he scalped Pandey & Warner was turning pint of the match. SRH were comfortably placed till then.

Once big guns were taken out, It was always going to be difficult for inexperienced lower order. SRH needs some experience in their lower order, otherwise they are fine. Their this weakness has costed them in spite doing very well so far.