The Sheikh Zayed Stadium in Abu Dhabi will host Match 20 of the Dream11 Indian Premier League 2020 when Mumbai Indians take on Rajasthan Royals.

MI will be eyeing their third win in a row, having beaten Sunrisers Hyderabad and Kings XI Punjab in their last two games (most recent first). While the Rohit Sharma-led unit defeated SRH by 34 runs after scoring 208, they came out trumps against KXIP, beating KL Rahul and Co. by 48 runs.

RR, on the other hand, registered two wins from as many games at the start of the tournament against KXIP and Chennai Super Kings. But they lost their last two games – against Royal Challengers Bangalore while setting up the total, and against Kolkata Knight Riders while chasing the target.

RR will be out to break the two-match losing streak while MI will be eager to complete a hat-trick of wins to register their fourth win. Its going to be an entertaining high scoring game.

MI and RR have faced each other 21 times in the IPL so far and are tied at 10 wins each.

Rajasthan Royals has dominated this tie in the recent past, winning four of the five encounters against Mumbai Indians. 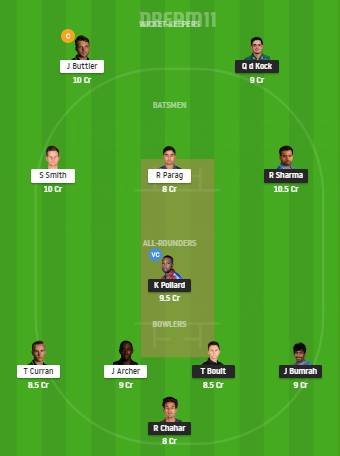 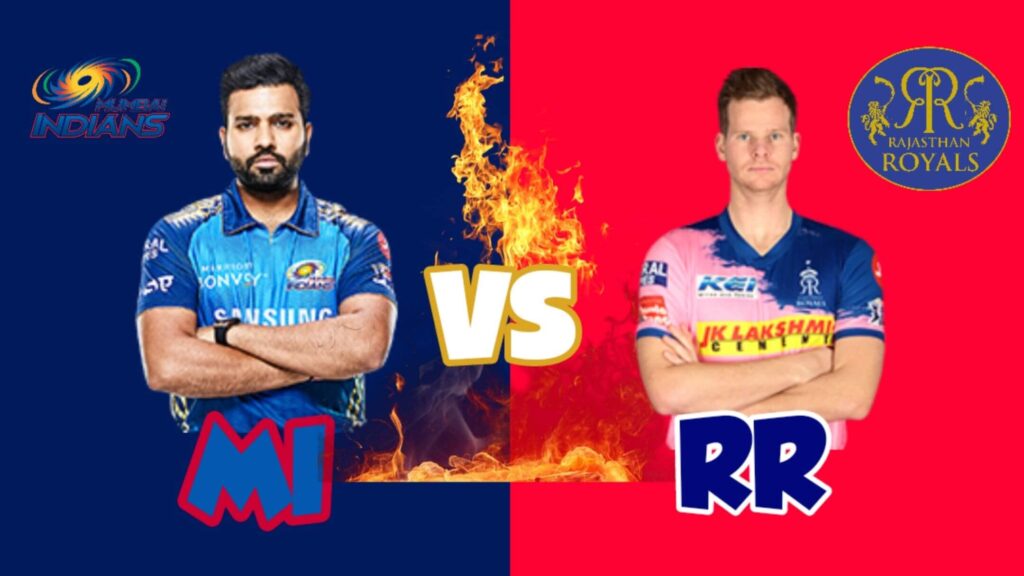 MI are on a roll, RR are somewhat lost after a promising start.

MI seems to be doing well in all departments. Their bating & bowling is coming together. RR seems too dependent on their Top 3. They need to learn to look beyond them.

I guess today RR will replace Uthappa with Jaiswal. Uthappa is struggling and his Score in all the 4 Matches tells the story.

But, Even if RR make som changes in squad, They really need to change the order. Smith/Butler needs to move lower and take charge of the lower order. Uthappa/Jaiswal should open with one of the two.

Another interesting titbit is that in their last 4 encounters RR have come on top of MI. 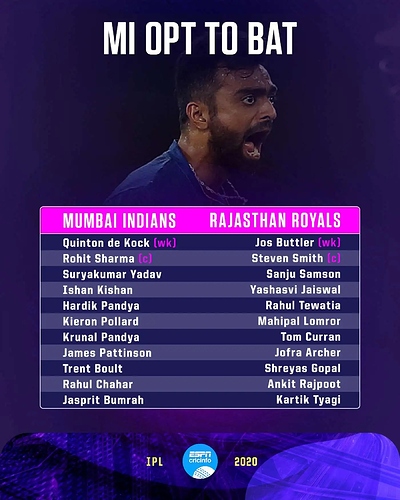 Rajasthan have made three significant changes after two defeats on the bounce. Uthappa, Parag and Unadkat are out, with Jaiswal, Tyagi and Rajpoot coming in.

Today’s match was very one-sided. Both MI and RR did some great bowling but RR were not able to stop MI’s boundary machine Hardik Pandya and Suryakumar Yadav in death overs.Whereas, RR was too impatient while batting and got out quick which led to their loss.

In the first innings, MI started off excellently with their openers Rohit Sharma and Quinton De Kock. Even after their partnership broke, they continued hitting and played patiently. In the last six overs Hardik Pandya and the consistent Suryakumar Yadav smacked 75 runs.

In the second innings, RR was off to a very bad start. In the power play they lost 4 important wickets. But, Jos Buttler tried really well. He scored 70 runs in 44 balls out of which he hit 5 sixes and 4 fours. On the other hand, MI’s bowling today was out of the ordinary. Jasprit Bumrah bowled the right lengths and got the swing consistently in today’s game. He got 4 wickets and had an economy rate of just 5!

Overall in my opinion MI played great today where they got off to a good start did not lose wickets in middle overs and scored many runs in death overs. But, RR did not do so well in batting or bowling. They got impatient while batting and while bowling in the death overs. 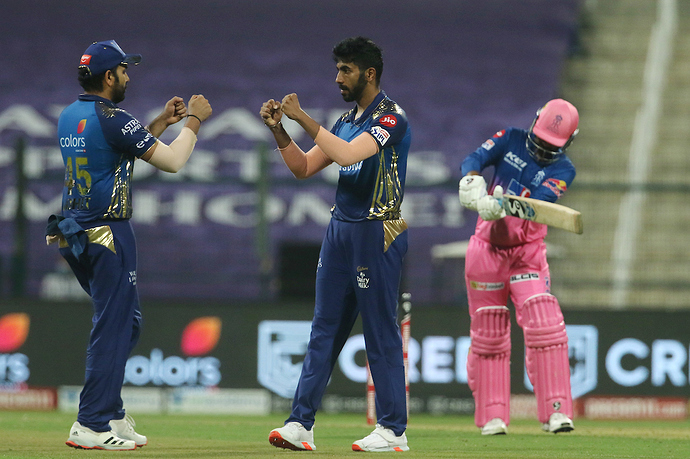 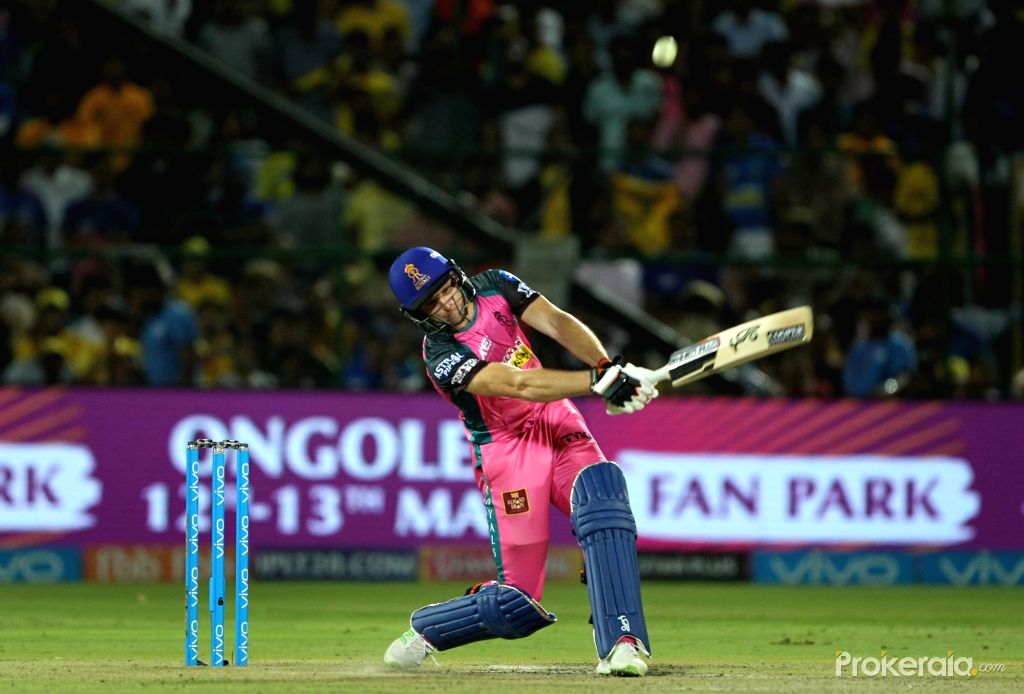 MI tops the points table with this win. 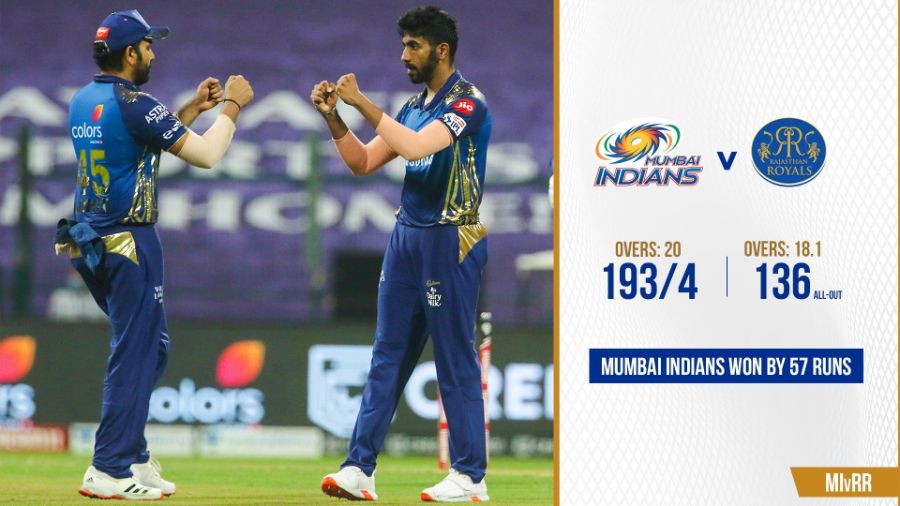