IPL 2020 carnival moves on to Match No.6 between Kings XI Punjab and Royal Challengers Bangalore at the Dubai International Stadium. The match will have some old rivalry catching up as KL Rahul will go against his old franchise and Virat Kohli will be up against Anil Kumble’s team, who he is said to have an estranged relationship with.

Kings XI would be disappointed with their result in the last game as they dropped a handy 2 points to DC in the Super over. however, RCB did not look at their best form against SRH while defending 162 at the same pitch. Bowling would be a serious concern for captain Kohli. While KXIP’s bowling looked in top shape with Mohammed Shami looking menacing and Sheldon Cottrell delivering the goods and young Ravi Bishnoi impressing on debut, it will be the batting that will keep them on their toes. KL Rahul needs to fire this evening.

We might see both teams making changes today, Chris Gayle should definitely open in today’s match against his ex team and if the Universe Boss stands tall tonight RCB will be dismantled. You can’t keep Gayle away from the XI for two T20s in a row, can you? Jimmy Neesham should be a better choice than Chris Jordan who got smashed for 50+ runs last match. RCB might look to change Josh Philip who looked uncomfortable behind the stumps and with the bat by adding Moeen Ali. 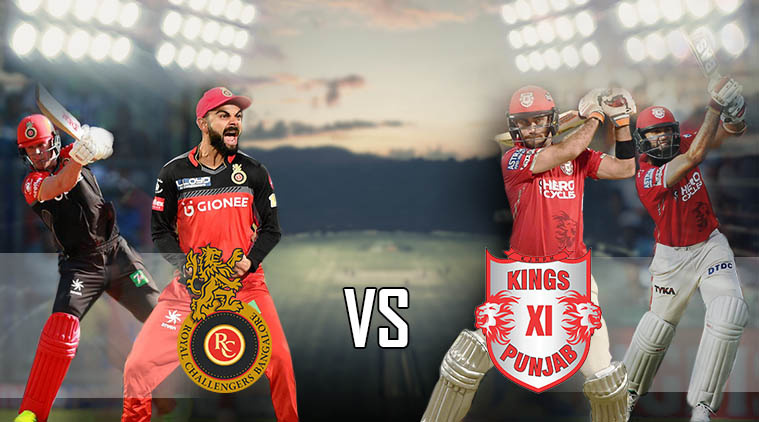 KXIP and RCB have faced each other 24 times in the IPL so far and the teams stand level with 12 wins apiece. Bangalore, however, has dominated the recent head-to-head, winning four of the five previous matches against Punjab. 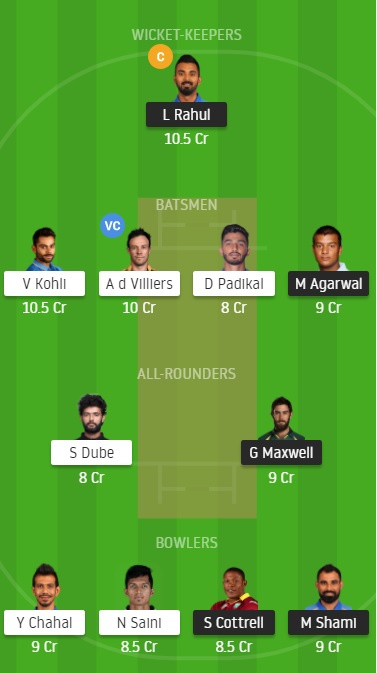 KL Rahul, Mayank Agarwal, Karun Nair, K Gowtham and J Suchith all play for Karnataka and for Kings XI Punjaj. Anil Kumble the coach is arguably Karnataka’s greatest-ever cricketer and he will know how to handle a team that has only 2 players from Karnataka in the opposite side. Royal Challengers versus Karnataka to keep in mind.

My Prediction: IF KXIP win the toss they should bowl and chase the target to win the match 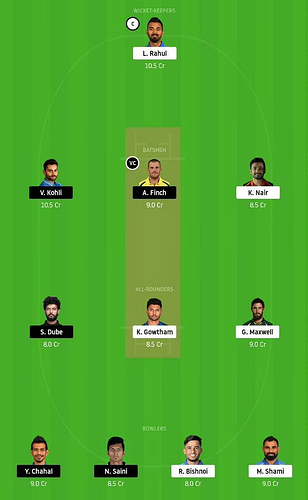 Royal Challengers seem to lack lower-order firepower and it kinda inhibits their top order. Kings XI have a problem with their death-bowling. They seem to concede too many.

There is also sub plot to the contest. Entire Indian Part of KXIP top order & Head Coach is from Karnataka. So, It’s gonna be a like Karnataka Vs Bangalore here. Kannadigas would be pretty confused regarding whom to cheer for?!

Here is my Team for the day. Come on with yours! 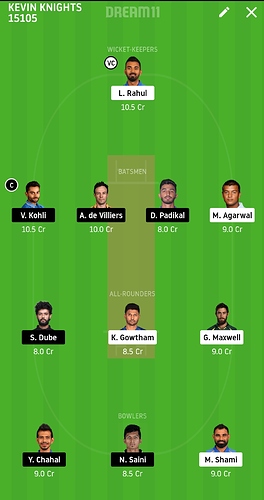 A SMASHER by Rahul! One man show all the way!

A true Captains Innings! Highest score by a skipper in an Innings, He surpassed Finch (126). Will Finch retaliate now? 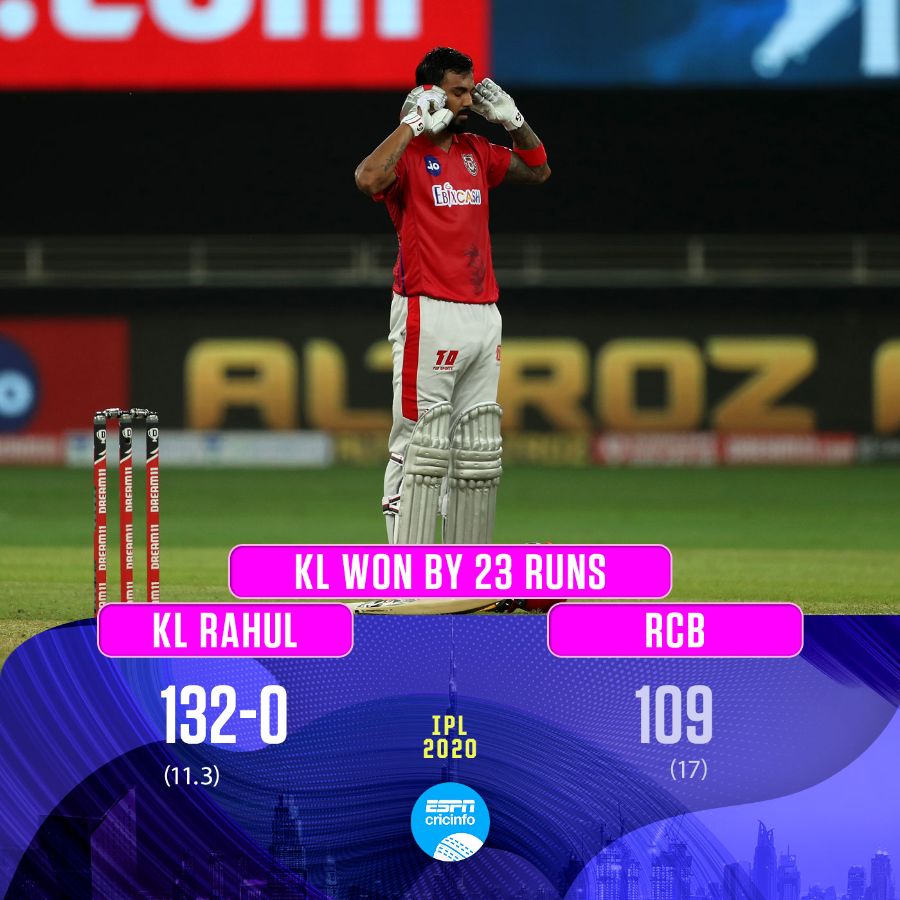 Man Of the Match - KL Rahul with no doubt. 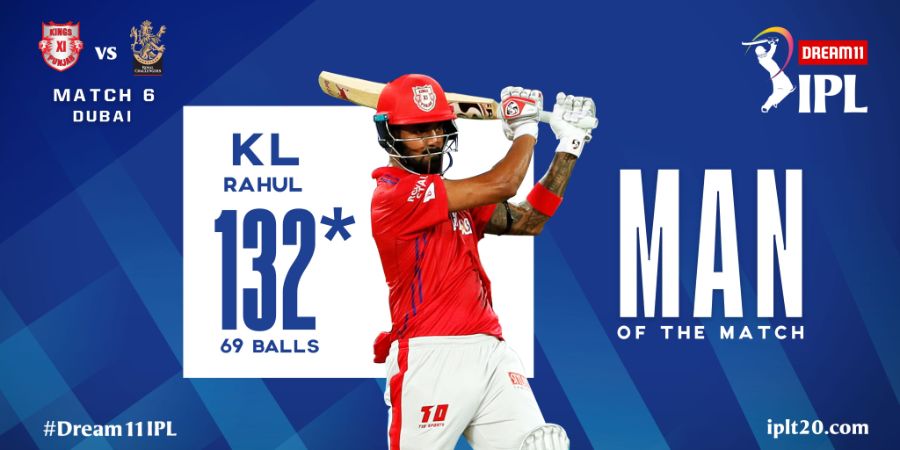 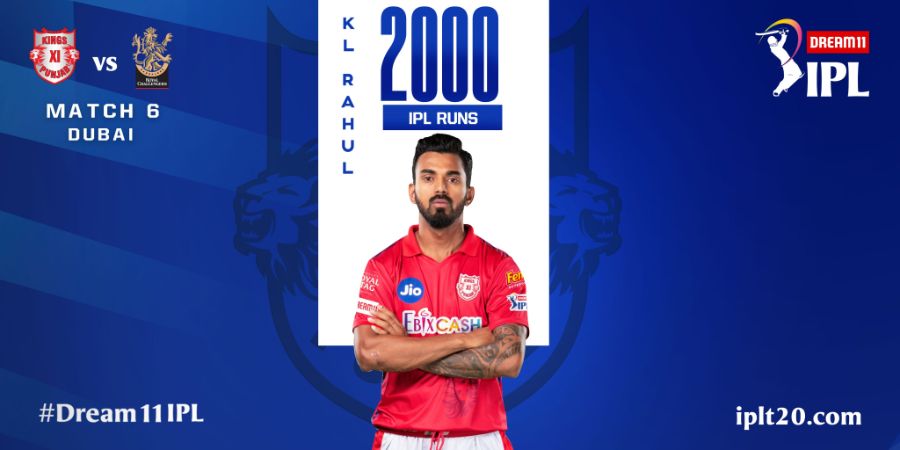 KL Rahul was dropped by Virat Kohli at 83 and 89 which cost RCB the match. KL Rahul’s knock of 132* in just 69 balls with 14 fours and 7 sixes was amazing, making him the first Indian batsman to score 132 in IPL.