After a week’s break, Formula 1 is back with a race at the Sochi Autodrom in Sochi, Russia. 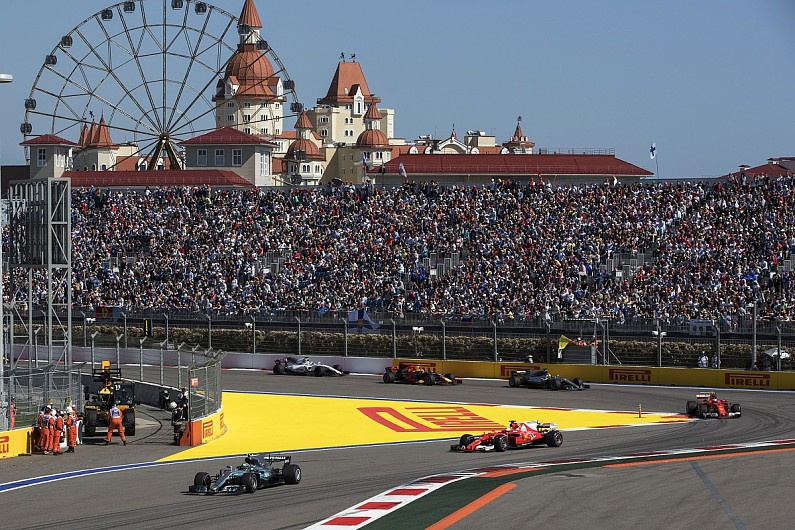 A street-style circuit built around the Sochi Olympic Park

Turn 3 is a dramatic one, taking drivers around the spectacular Poyushchiye fountain

Mercedes are set to be filmed this weekend for their segment on the Netflix show “Formula 1: Drive to Survive”.

They were last filmed during the 2019 German GP, where the results for Mercedes were Bottas DNF and Hamilton P9.

Fans are speculating (and hoping) that the filming jinxes the team and puts an end to the Mercedes dominance. 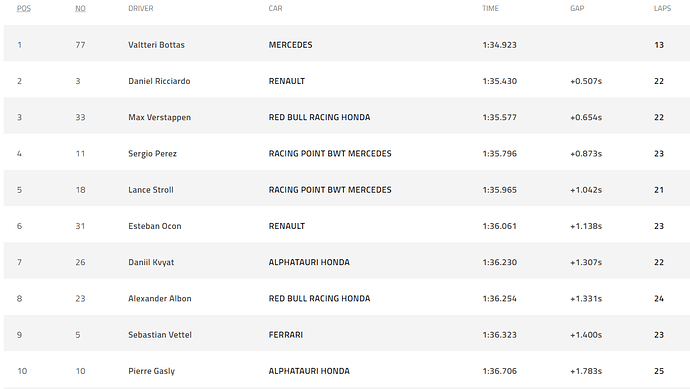 The FP1 session was more invigorating than last year’s race at Sochi, with 2 crashes.

Carlos Sainz hit the wall at Turn 7, causing the safety car to be deployed. His rear and front wing were damaged. A while later, Latifi crashed into the barrier at Turn 10. Both drivers are safe.

@Mclaren might be right about the cameras skeeving Hamilton out. While Bottas topped the practice session, Hamilton ended up with a shocking P19.strong text Could this year’s race finally be the one to end the Mercedes dominance at the Sochi circuit?

Meanwhile, Daniel Ricciardo seems to be dead set on winning the tattoo bet against the Renault Team Principal, by dominating much of the session before eventually ending up in P2, about half a second slower than Bottas. 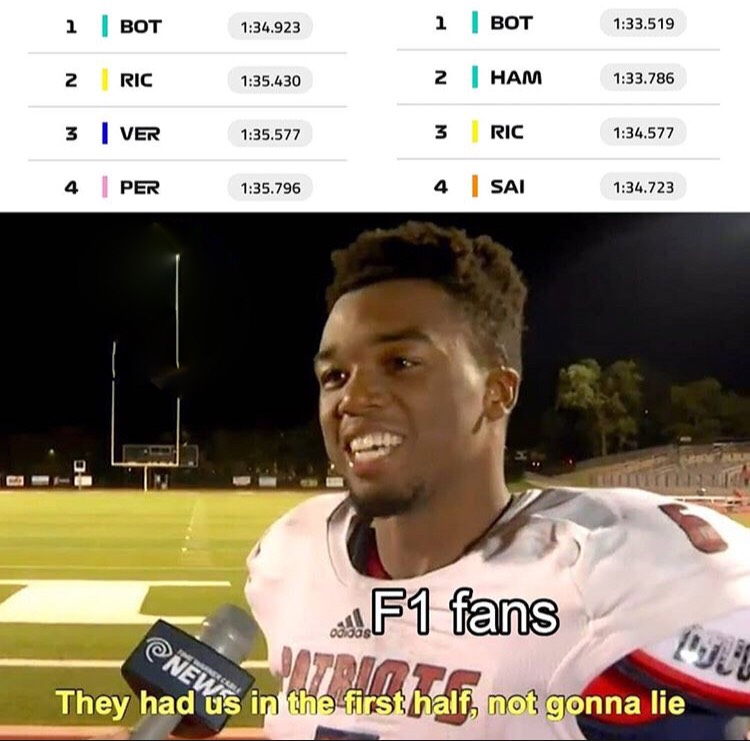 Lewis Hamilton bagged the second place in FP2 of the Sochi GP, 0.267s behind his teammate.

Meanwhile, the McLarens seem to be doing much better in this session, taking P4 & 5.

Danii Kvyat (an often forgotten, but rather decent driver) did pretty well in the FP1 at his home race but ended up P13 in FP2 (yikes)

The Red Bulls could have done much better, finishing P7 and P12.

In FP3, he took P1, a spectacular 0.776s ahead of his teammate, breaking Bottas’ streak of practice session P1s.

Carlos Sainz was 0.41s behind Bottas, claiming P3. His teammate, Lando Norris, did not fare so well, landing himself in P20.

Ricciardo’s streak of good luck must’ve run out for the practice sessions, as he ended up P10. Ocon, on the other hand, claimed P5.

Vettel and Leclerc were P7 & P12, respectively. Not so great compared to Ferrari’s former glory days, but excellent in comparison to their performance this season. 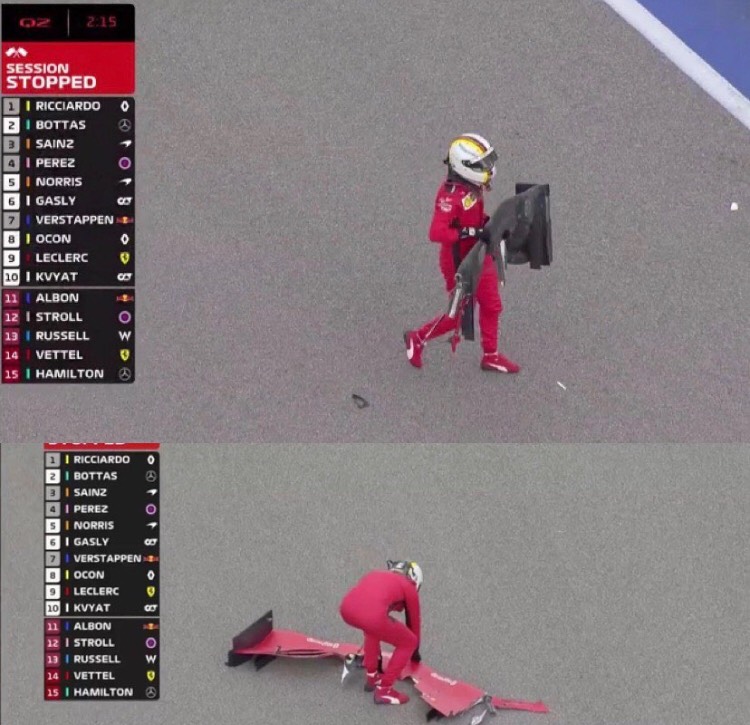 If you didn’t watch the Sochi Qualifying session because the circuit is known for its uneventful races, you definitely missed out.

Danii Kvyat made P3 in the Q1 of his home race but got knocked out in Q2, starting P12 for the race

Vettel crashed into the wall in Q2, losing his back end, and front wing. Red Flags were brought out.

Hamilton was nearly knocked out of Q2 after his time got deleted for crossing the white line at turn 18, but eventually ended up taking the 96th pole position of his career

TWO DNFS IN THE FIRST LAP

Carlos Sainz and Lance Stroll have both crashed: Sainz careening into the wall as he tries to rejoin the track, and Stroll spun into the barrier.

Hamilton gets a 5-second stop-and-go penalty for issues during his practice session AND ANOTHER 5s penalty for crossing the white line at Turn 2.

Things do not seem to be going well for Red Bull Racing. Max Verstappen reported issues with control over the rear end of the car, while Albon is battling for 17th place.

Daniel Ricciardo got a +5s penalty for crossing the white line at Turn 2. Will he still be able to get that podium? We sure hope so! 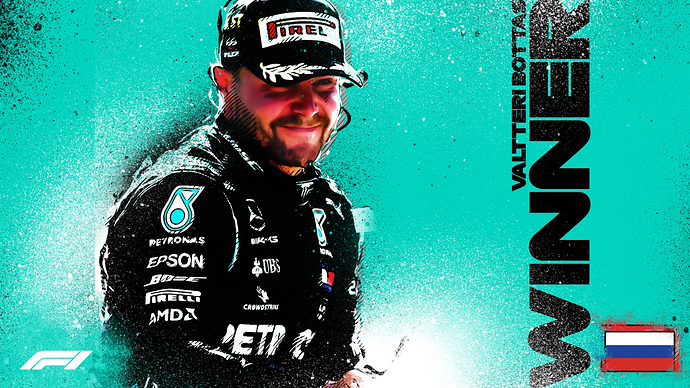 Valtteri Bottas takes the win at the Russian GP, continuing Mercedes’ unbroken record of holding P1 at the Sochi Autodrome.

Verstappen finished second, about 7 seconds behind the race leader, even with some intermittent issues with the car.

Hamilton brings up the rear of the podium by coming P3, despite the 10 second time penalty he faced.

Lewis Hamilton after his third place finish at the Russian GP accused stewards of trying to stop him from winning by imposing time penalties. “Everything we have on our car is being checked and triple-checked. They are changing rules, such as the engine regs, lots of things to get in the way to keep the racing exciting, I assume.”

"It’s ridiculous the points they have been giving people this year in general,” he said. “I’ll just make sure I’m squeaky clean moving forwards, don’t give them an excuse for anything.” 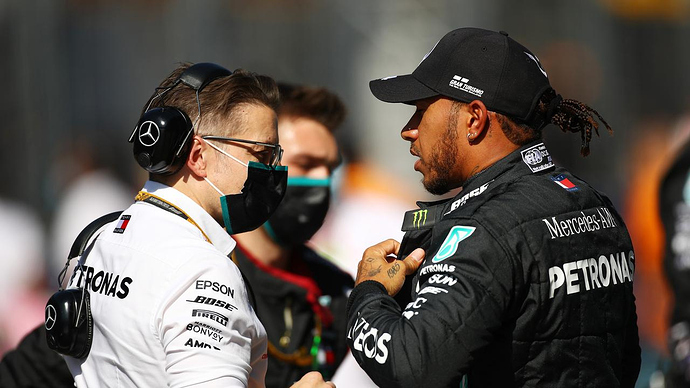 “Everything we have on our car is being checked and triple-checked. They are changing rules, such as the engine regs, lots of things to get in the way to keep the racing exciting, I assume.”

Interesting that the “accused stewards” would want to stop Hamilton’s Mercedes but not Bottas’ Mercedes. Hmmm…

Although, I kind of agree to his comment about it being done to “keep the racing exciting”. Mercedes and Hamilton dominance is making the races boring. People already know in advance who is likely to win the race.

Fans however want to see competitive races, see underdogs challenge the champions and make it to the podium. Hamilton being always No.1 could do more damage to the sport in the long run, than Mercedes being able to tout their untouchable reign at F1.

Mercedes and Hamilton dominance is making the races boring. People already know in advance who is likely to win the race.

Exactly. F1 viewership has gone down as their is no competition at all for Mercedes. I don’t know what’s wrong with Ferrari they seem to be completely off track. P11 and P15 start can never get them to the podium.

@Jay I don’t think that the FIA would give out penalties to make a race more exciting. I see how it could seem that way, but Hamilton was given the penalties in the Sochi Grand Prix because he started in the wrong place during his practice sessions, not once but twice.

Moreover, he was not the only driver to be given penalties in the race- Ricciardo was also given a +5s penalty for going off track at turn 2 of the race. According to Hamilton’s logic, they must’ve been trying to stop Ricciardo from getting a podium!

There have been multiple occasions where the stewards have pardoned Hamilton’s mistakes in a race and not given him a penalty. It is unfair of Hamilton to drum up conspiracy theories of the FIA trying to sabotage his career for some extra viewership, especially when he himself was at fault.

@Yash While the Mercedes domination DOES get a little boring, I do not think that it is reducing the F1 viewership. 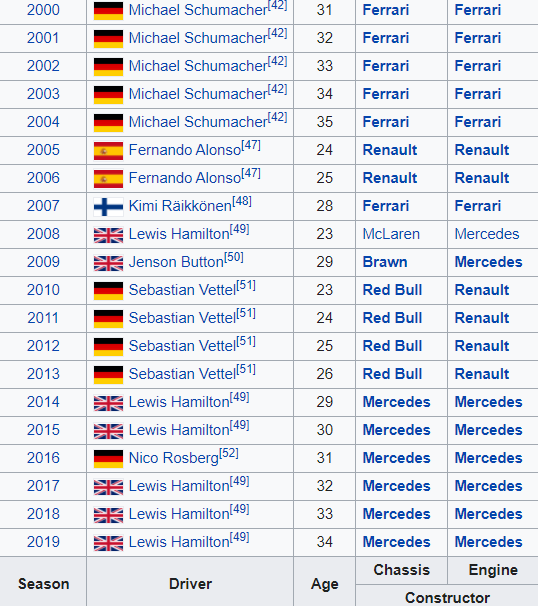 The above image shows the winners of the Constructor’s Trophy for the past 20 years. As you can see, dominancy is not a trait reserved for Mercedes. Every team has had its turn to be dominant- it’s just Mercedes’ turn right now.
Also, Formula 1 isn’t just about the winners of the race. If it were, no one would sit through 2 hours of racing- they would just look up the results after the race

If anything, the viewership has gone up for the 2020 season, after the Netflix show Formula 1: Drive to Survive released its second season on the 28th of February. We live in a world where people, especially the younger generations, prefer watching Netflix over TV. The show is a little dramatized but is an excellent gateway into the world of motorsport. Drive to Survive helped put F1 on the radar of millions of Netflix users across the globe.

Another reason that more and more Millenials and Gen-Z viewers have started watching Formula 1 is the driver lineup, the rookies in particular.
Lando Norris, Charles Leclerc, Alex Albon, and George Russell, known as the “Twitch Quartet of F1”, are fan favorites. Their friendly banter and healthy competition during their Twitch streams has endeared them to fans across the world.
Speaking of friendly banter, I highly recommend subscribing to the McLaren Youtube channel. The driver challenges are bound to have you laughing your heart out, and the Unboxed videos provide a great insight into the behind-the-scenes of the F1 races as well as a better look into the personal lives of the drivers.