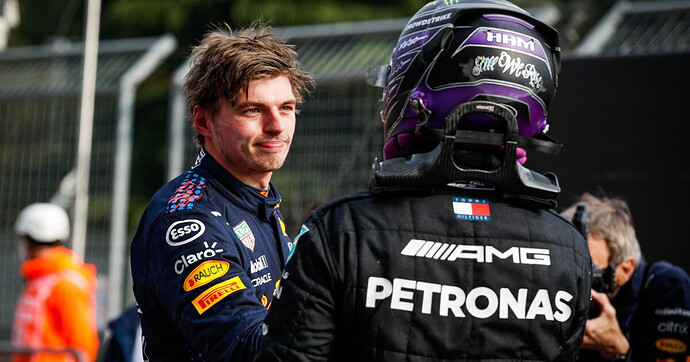 The No. 44 vs 33 battle is back this weekend at the Circuit de Barcelona-Catalunya, Spain!!

A great balance of high and low-speed corners

Turn 1 is the best overtaking spot

Will Hamilton win again or will Verstappen swoop out from under him and bag the title? 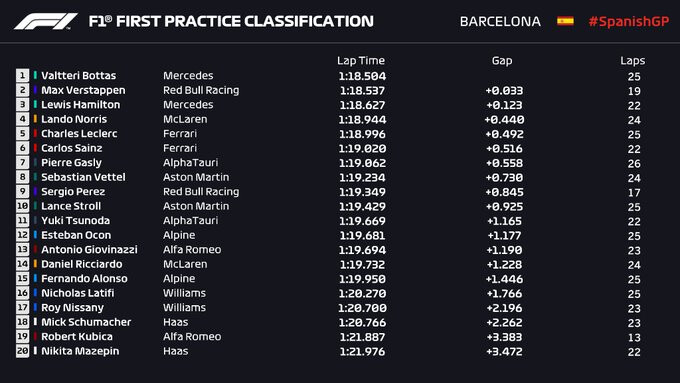 Looking at just the practice sessions, you’d think that Valterri Bottas would be at a better driver standing than No. 4

The FP1 session was paused early on as MazeSpin once again lived up to his moniker, and red-flagged with 15 mins left as Kubica (driving Raikkonen’s Alfa Romeo) got stuck in the gravel trap at the reshaped Turn 10.

George Russell’s place was taken by Roy Nissany for the session- he placed P17. Other than that, the session was as uneventful as expected.

you’d think that Valterri Bottas would be at a better driver standing than No. 4 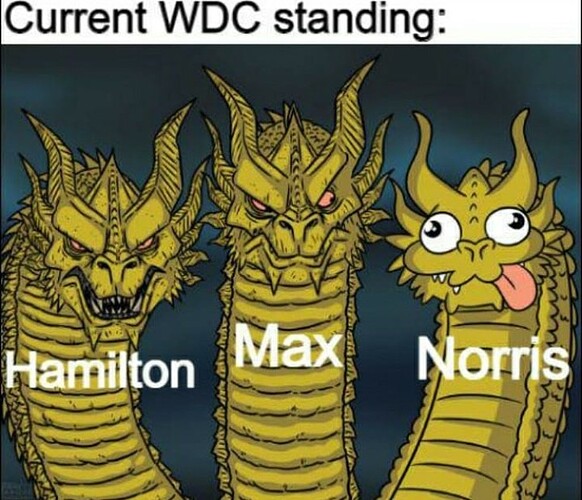 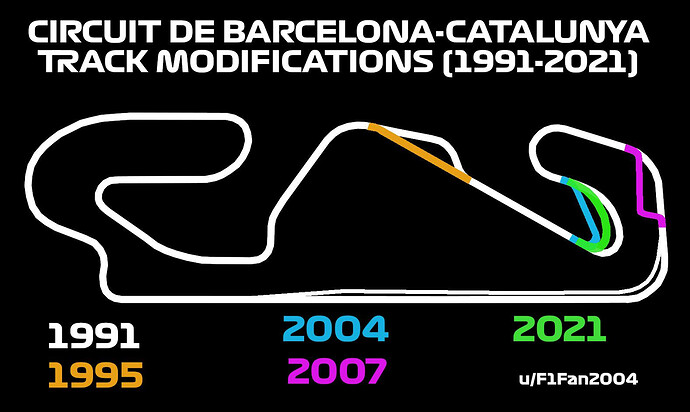 Here are all the changes made to the Circuit de Barcelona-Catalunya since 1991!

The most recent Turn 10 track change was made this year to increase the safety of the drivers while racing. The turn now resembles the original curve into Turn 11, as opposed to the former sharp hairpin bend.

So, what do the drivers think of this change?

The opinions are varied: Some think that it might reduce overtaking opportunities, others believe that it makes for a faster corner and provides a whole new set of opportunities.

For the first time since 2014, there has been no pre-season testing at the circuit, so most driver opinions have been based on their past experiences as F1 drivers rather than an actual drive around the track.

Overall, the consensus seems to be that it won’t make THAT big a difference to the race in general.

Some seasoned drivers like Fernando Alonso speak from the experience of driving on the original Turn 10, saying "I don’t that it’s going to be a huge impact on the laptime, on the set-ups, on the overtaking possibilities – I think it’s pretty similar."

We’ll get a better idea of the impact of change once we see how the drivers fare in Sunday’s race. 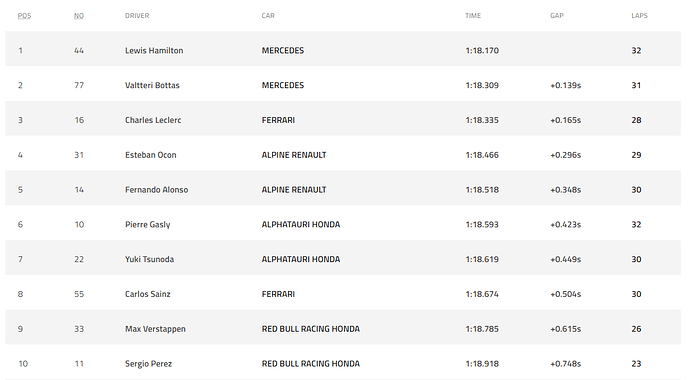 Hamilton, who has won the last 4 Spanish GPs consecutively, has topped the FP2 rankings, followed closely by his teammate.

You might look at this table and wonder “WHAT HAPPENED TO REDBULL???”

Well, Max Verstappen might as well have been the protagonist of the book series A Series of Unfortunate Events once he switched to the soft tyres in the 60-minute FP2.

He faced significant traffic during his flying lap, went deep into Turn 10, and finished the session with the right footplate of his front wing hanging off due to damage caused by running over the kerbs at Turn 8 multiple times.

The other team that did surprisingly poorly was McLaren, who have introduced a new front wing and floor to their cars in Barcelona. Lando Norris, who finished P4 in FP1, finished 12th after running wide in numerous turns on his low-fuel run. His teammate, Ricciardo did as well as expected based on his FP1 results, coming in at P15

Because the top positions were freed up by the poor performance of the aforementioned teams, midfield teams like Ferrari and Renault had their time to shine! 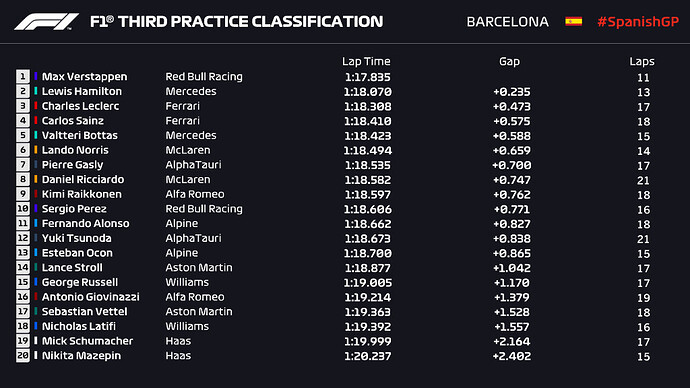 Verstappen more than made up for his dismal FP2 result by topping the FP3 rankings!

It seems that the Ferraris are making their way back up the grid after last year’s sudden drop in performance.

It was a pretty uneventful session, save for Lando Norris going wide into the gravel at Turn 10 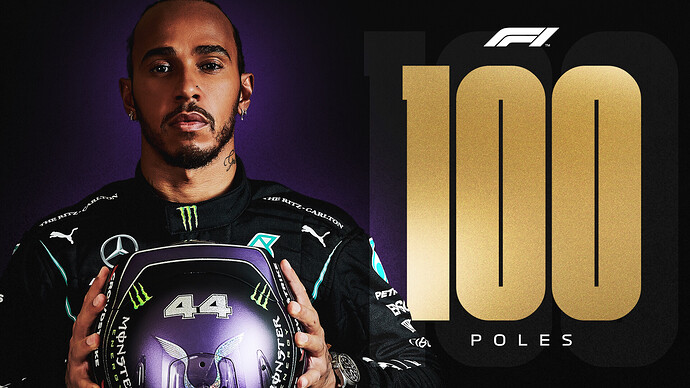 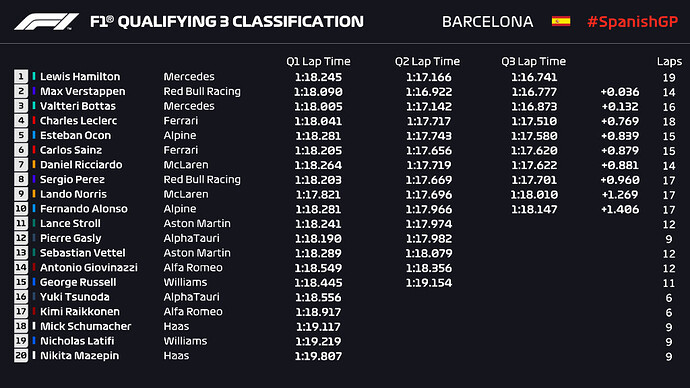 It’s HamVerBot in the starting top 3 again, with Leclerc in P4 and less than a second slower than pole

Tsunoda ran wide in Turn 9 on his final flying lap

Perez spun violently at Turn 13 on his first flying lap 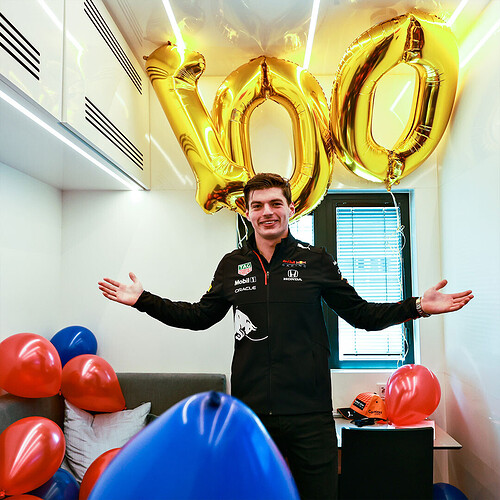 Hamilton isn’t the only century-achiever this weekend!

Max Verstappen is celebrating his

What a FANTASTIC overtake by Verstappen at the start of the race as he becomes the race leader by +1.5s

UPDATE: He has been served with a +5s time penalty

Not a great day for the Alpha Tauris!

Yuki Tsunoda is OUT of the race, with engine issues at Turn 10 on the 8th lap.

The Safety Car has been deployed.

Meanwhile, Antonio Giovinazzi had a disastrously long pit stop of 35.1 seconds as one of his tires-to-be was punctured. The engineers therefore had to change the whole tire set, causing the massive delay.

This has been unheard of, even by the more seasoned commentators like David Croft

Luckily, the engineer caught it, or he could’ve suffered a horrible accident

Verstappen pits as the wear and tear on his rear tires but is put at a disadvantage with a longer pitstop of 4.2s.

Mercedes choose to go long and pit Hamilton later, but one has to wonder whether that was the right move looking at the damage to his rear tires.

one has to wonder whether that was the right move looking at the damage to his rear tires.

Looks like the Mercedes team was thinking the same thing, as they pit Hamilton only a lap after saying they’ll go long.

This move put Verstappen back in the lead as Leclerc (now P4) also pitted.

With a gap of less than one second, the title battle is back on between Hamilton and Verstappen!

Committed to the two-stop strategy, Mercedes pit Hamilton for a set of mediums.

Will this prompt the Red Bull team to pit as well to gain an edge?

Stroll and Alonso under investigation for Turn 1 incident. 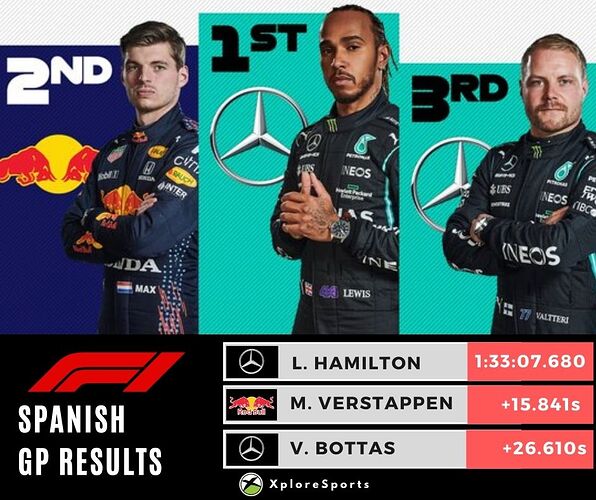 Not only that, but he also won Driver of the Day by a whopping 22%! This is his 5th consecutive Spanish GP win

Another F1 record is broken as HamVerBot bag their 3rd consecutive Spanish GP podium, the most any trio has won consecutively at a single track

Verstappen came in at P2, about 15s behind Hamilton, and Bottas trailed behind in P3.
Max won Fastest Lap while Bottas won his 50th podium with Mercedes Benz

Charles Leclerc (Driver of the Day, in my opinion) claimed P4 while his teammate Sainz ended in P7 in his home race.

Sergio Perez, Red Bull driver #2, came in at P5 after a great drive and in P6 was Danny Ric. The other MCL35M must have something wrong with it as it has performed poorly this weekend, Norris finishing P8.

In P9 and P10 were Ocon and Gasly, respectively. 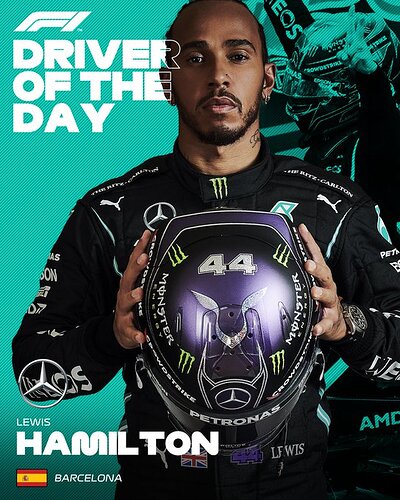 “First, I want to acknowledge all the fans that are here. It’s great to see. I feel great… the training’s working and paying off. It was a really great strategy by the team. What a day!”

“There was not much we could do… I was a bit of a sitting duck. I tried everything I could. We are not where we want to be… but compared to last year it’s a big jump for us”

“I lost a place on Lap 1 to Charles and that made it tricky for me in the early part of the race. Otherwise, the pace wasn’t too bad and it’s good that I made it to the podium” 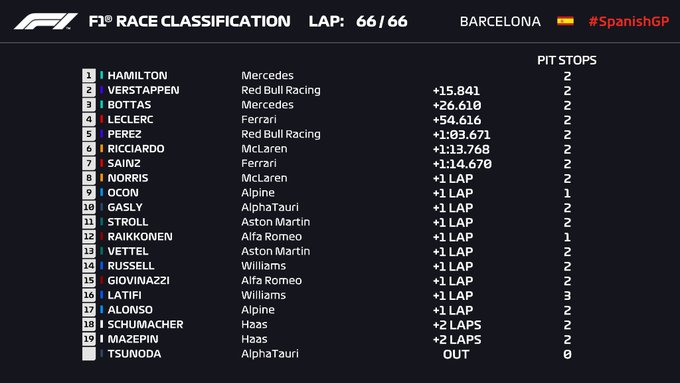