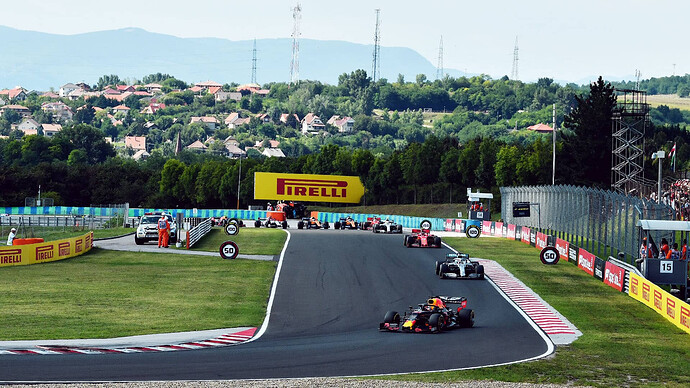 The last race before summer break (

) is being held at the Hungaroring in Budapest, Hungary.

The Hamilton-Verstappen battle continues with the following standings for today’s race: 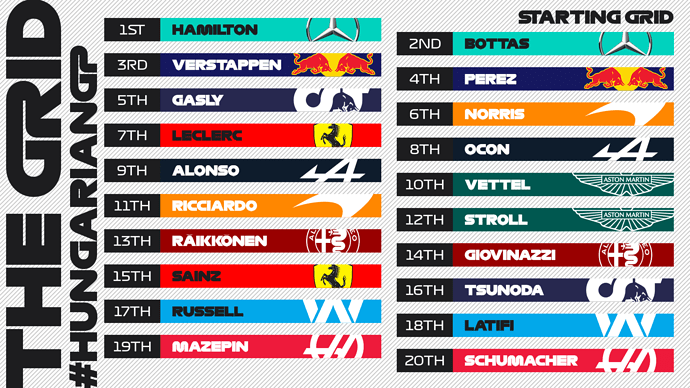 Will Hamilton win a record 9th win at the Hungaroring?

The word is that the track is extremely slick already- adding to that, it’s supposed to rain pretty heavily

What a shocking starting lap

Bottas bumped into the rear of Lando Norris’ car and causes a multi-car swerve, causing himself, Sergio Perez, Lance Stroll, and Charles Leclerc to DNF.

Max Verstappen’s floor is completely GONE so who knows whether he’ll be able to further compete.
Bottas really took out both Red Bulls in one move

For now, Red Flags have been brought out and the drivers will line up in the pit lane.

The fifth retirement of the race, Lando Norris will be unable to continue due to irreparable damage to his car. This ended his amazing streak of finishing in the points every race this season

The race is starting in less than a minute, and with a lot of great midfield and leading drivers out of the equation, we should have an interesting podium today.

Hamilton is the only driver who didn’t start in the pits, making for a funny image!! He is, however, coming in for a tire change now pushing him from P1 to P14 in seconds

(Not that he was going to finish in the points anyway)

Giovinazzi receives a +10s stop-and-go penalty for speeding in the pitlane while the incident between Raikkonen and Mazepin is still being investigated.

Meanwhile, Esteban Ocon is calmly leading the race and ay even win it, making it his first victory since his GP3 days!

the incident between Raikkonen and Mazepin is still being investigated.

An update: Kimi Raikkonen received a +10s penalty for an unsafe release in the pit lane

Bottas in the first lap: 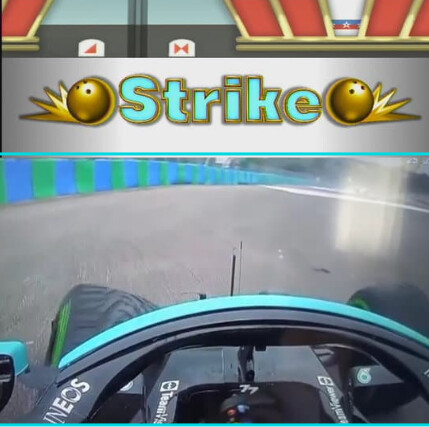 Here are the final driver standings for yesterday’s race 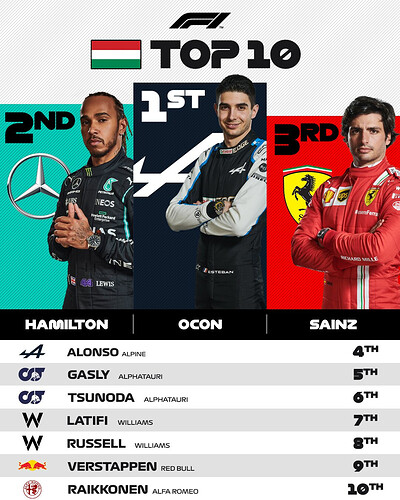 Sebastian Vettel finished 2nd originally but was disqualified because the stewards were unable to take the required amount of fuel for sampling following the race.

They conduct this test to make sure the drivers haven’t used any illegal substances in the fuel. Since Vettel burned all the fuel, there was no way for the FIA to check for this.