Football OR Soccer? What people call the game around the world?

Here is an interesting graphic about what people call world’s favorite game! 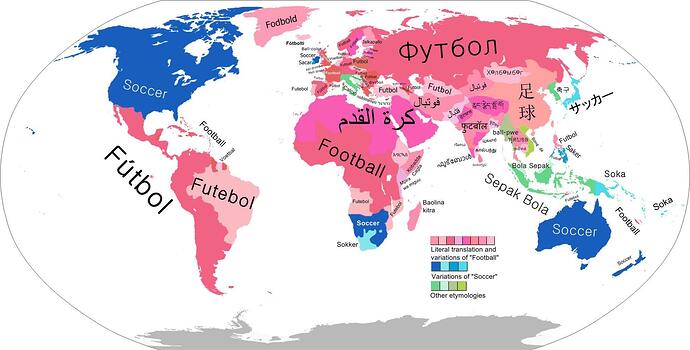 Football is the most popular sport in the world, but there is no consensus around the world for what it is called. The chief governing body is FIFA - Fédération Internationale de Football Association, though you don’t hear people calling it Association football, usually it’s soccer or football, and in non-English speaking countries, it is often some form of the word football, written phonetically (e.g. “futbol”) or a translation of the word football.

In the UK, the term Association football came about to distinguish the game from the other versions of football played at the time (e.g. rugby football), and from the ‘association’ part of the name came the word soccer (assoc.).

Although the name soccer came out of the UK, there it is predominantly called football, while elsewhere in a few English speaking countries colonized by the British it called soccer. You will find that soccer is still the main term for the game in countries in which there is another major sport called football (e.g. USA, Canada, Australia).

The sport is not just called either football or soccer. In some countries, the name of the sport may not be clearly one or another, and for some countries and languages it is evolving, typically countries which have traditionally called it soccer are starting to more regularly call it football.