🏑 Dhyan Chand - The Wizard of Hockey

Major Dhyan Chand (29 August 1905 – 3 December 1979) was undoubtedly one of the best sportsman ever to have graced the game of Field Hockey. For his superb ball control and extraordinary goal scoring feat he was nicknamed as “The Wizard” or “The Magician” of hockey.

Over his sporting career Major Dhyan Chand had scored more than 1,000 goals out of which 570 goals were international ones in 185 matches. He was part of the Indian hockey teams that won three Olympic gold medals in field hockey. In 1928 where he emerged as the hero of the 1928 Olympics by scoring 14 goals in five matches,1932 Los Angeles Olympics and he led the team to the 1936 Berlin Olympics to win India’s third successive gold in field hockey.

It is believed that after India defeated Germany in the 1936 Olympics final 8–1, Adolf Hitler expressed his desire to meet Dhyan Chand. Hitler offered him a senior post in the German Army, to which Chand refused.

The epic conversation between Adolf Hitler and Dhyan Chand :
Hitler (while casting a glance at the sub-standard canvas shoes of Dhyan Chand): "What else do you do, when not playing hockey ?"

Dhyan Chand: "I am in the Indian Army."

Hitler: "What is your rank?"

Dhyan Chand: "I am Lance Nayak."

Hitler: "Come over to Germany. I will make you a Field Marshal."

Dhyan Chand: "India is my country and I am fine there."

Chand continued playing hockey till the late 1940’s and retired from army as a Major in 1956. He became a coach after his retirement.

He was honored with the Padma Bhushan, India's third highest civilian award in 1956 for his contributions to the field of sports. The birthday of this great hockey legend, 29 August, is celebrated as National Sports Day in India.

India’s highest award for lifetime achievement in sports, The Dhyan Chand Award, is named after him. On his birthday, the President gives away sport-related awards such as the Rajiv Gandhi Khel Ratna, Arjuna Award and Dronacharya Award at the Rashtrapati Bhavan. 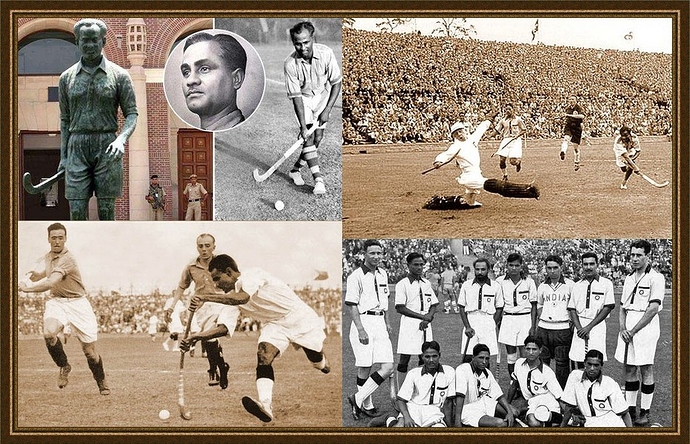 The wizard of Hockey! And a true patriot!

While Dhyan Chand remains India’s greatest Hockey player ever, the country owes its domination in the sport at the Olympics equally to his younger brother, Roop Singh.

In the 1932 Olympics at Los Angeles, when the Indian Hockey team rolled over Japan and America like a juggernaut, Roop Singh and Dhyan Chand scored 24 of the 35 goals for the country, which led to them being dubbed ‘Hockey Twins’.

Roop Singh, in fact, went on to achieve the ‘impossible’: outscoring Dhyan Chand in the Olympics, scoring 13 goals to his elder brother’s 11.

Tribute to the 'Wizard of Hockey"
Major Dhyan Chand, the greatest hockey player of all time. A few months before his death from liver cancer, he said, “When I die, the world will cry, but India’s people will not shed a tear for me, I know them."
He was admitted to the general ward of AIIMS because no one recognised him.
Happy National Sports Day, everyone. It’s high time India confers this great legend with Bharat Ratna, India’s highest civilian honor. In 2014, Major Dhyan Chand was among the nominees for Bharat Ratna. The award was then given to Sachin Tendulkar and C. N. R. Rao. The RTI (Right to Information) suggested that the Prime Minister’s Office had ignored the recommendation from sports ministry on giving the award over Sachin Tendulkar. Rahul Gandhi did a last-minute change and recommended cricketer Sachin Tendulkar’s name instead. As Tendulkar was playing his farewell test with the entire nation glued to its television screens, Gandhi made a quick decision and had all the paperwork completed in a day. Dhyan Chand’s name was dropped. These politicians will go to any extent in a bid to influence votes and gain popularity among the masses.

It’s 2019, we yet have to see this great legend receive the due honour and pay tribute to this legend who refused the citizenship and a position in the German Military offered by Hitler. Let’s hope the hockey fans get to see this sooner than later.

Hitler: “Come over to Germany. I will make you a Field Marshal.”

Dhyan Chand: “India is my country and I am fine there.”