In absence of Live action, Let’s indulge in some nostalgia!

People who had watched cricket for some years till 2002 wouldn’t forget the Natwest final ever! Great match! Few twists and turns, heroic performances from Yuvi, Kaif & Dada himself. And who can forget Shirt waving and Dada jumping on Kaif after the victory! (Many were seriously worried for Kaif’s back afterwards

A real coming of age moment for Indian Cricket! Here are the highlights! Enjoy!

One moment I particularly remember relates to 14th over bowled by Irani to my all time favorite Viru in this match. Look at how he is toying with him. Such moments makes you a fan.

We may share other such nostalgic moments either in Words or image or video etc.

Picture of Kapil Dev lifting the 1983 World Cup is the most iconic moment in the history of Indian cricket. In the finals India were bowled out for a mere total of 183 runs from 54.4 overs. Kapil Dev’s catch of Sir Vivian Richards and the lbw dismissal of Felix Dujon were the highlights of an epic win. Indian WC dream had come true! 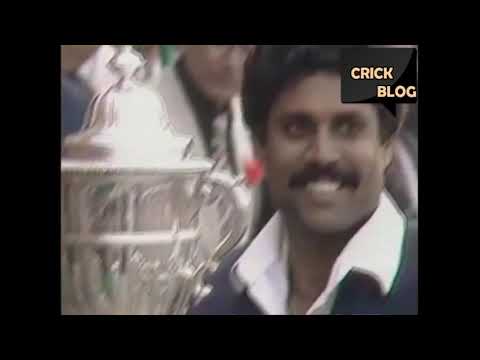 Pakistan needed 13 runs from 6 balls with a wicket in hand. Pakistan skipper Misbah-ul-Haq, well set on 35 when Dhoni pulled a surprise by giving the ball to the Haryana medium pacer Joginder Sharma. The first two balls of the over produced 7 runs. After conceding a wide of the first ball, Sharma bowled a full delivery to let Misbah smash it over long on for a huge six. The equation boiled down to 6 runs from 4 balls. Rest is history.

Must watch last 3 minutes of the video below.

In Eng tour of WI in 1994, 3rd Test Port Of Spain, Eng need 194 in 4th Innings to win. Ambrose decides to take matters in his own hand. Ambrose & Walsh are the only two bowlers needed to finish off the game in 19.1 overs. Epic win for WI.

Bhagwath Chandrasekhar - One of the best leg spinners India ever had. He was capable of out foxing the very best of batsmen. Here is a video of his 6 for 38 which helped India to win the First Test in England, Oval, 1971.

Two blazing innings in a single match. One very much like characteristics of the batsman, the other truly opposite.

Chika was usually very aggressive but on that day he was in the MOOD, blazing 75 of 58 balls. Unheard of those days when winning total was thought to be 250, 40/0 after 10 was considering best of the starts. A run a ball innings considered truly fast. And here was Chivalrous Chika with 130 strike rate, with an innings that wouldn’t be out of place in today’s slam bang T20.

His aggression strangely rubbed on Sunny too. Sunny played an unusually aggressive innings matching Chika stroke for stroke. You wouldn’t find other instances of Sunny brazenly hitting bowlers for six over their head, nope, never again.He ended up with his only ODI hundred with very NOT sunny SR of about 120.

Here are the highlights of the match in concern - India vs New Zealand 1987 World Cup at Nagpur.

P.S. - Did I mention a trifle matter of certain Chetan Sharma getting a 3 Bowled Hat-Trick, First ever in a World Cup? In 1984, only three teams participated in the tournament (India, Pakistan and Sri Lanka).

In the final deciding match, Sunil Gavaskar-led side beat Pakistan by 54 runs, topping the table with 8 points. India lift the title in the inaugural edition of Asia Cup. Krish Srikanth was at his best and destroyed all in his path. Ravi Shastri & Kapil too had an all round performance. Shiva was India’s bowling spearhead. Ravi Shastri was declared MOS and was awarded an Audi car, a rarity n India those days. The visuals of whole Indian team piling up on it while Ravi drove it around the ground are unforgettable.

Here are the highlight of the final!

Who can forget this?

It’s been 22 years and I can still remember how we celebrated through the night! What a match, what a crowd!