Cottari Kanakaiya Nayudu (31 Oct 1895 – 14 Nov 1967), also known as ‘CK’, was the first outstanding cricketer to play Test cricket for India and was also the first captain of the Indian cricket team.

A Captain in the Holkar Army, Nayudu played first-class cricket regularly till 1958 & returned for one last time in 1963 at the age of 68.

His most iconic innings was undoubtedly the ruthless assault on Arthur Gilligan’s MCC tour in 1926-27, where he smashed 153 in 116 minutes with 13 fours and 11 sixes. One of the sixes, off Bob Wyatt, landed on the roof of the Bombay Gymkhana. The MCC presented him with a silver bat in recognition of that innings.

In India’s first tour to England in 1932, CK was made the nation’s first Test captain. In 7 Tests, he scored 350 runs at an average of 25 and also took 9 wickets. However, he had a commendable record in first class cricket, scoring more than 10,000 runs and taking 411 wickets from 207 matches.

CK was honoured with Padma Bhushan in 1956 for his contribution in the Indian cricket.

CK was also the first Indian cricketer to endorse a brand - Bathgate Liver Tonic in 1941.

In CK’s honour and contribution to the Indian cricket, BCCI has named ‘The CK Nayudu’ award which is the highest and most revered award for captaincy and lifetime achievement in India. 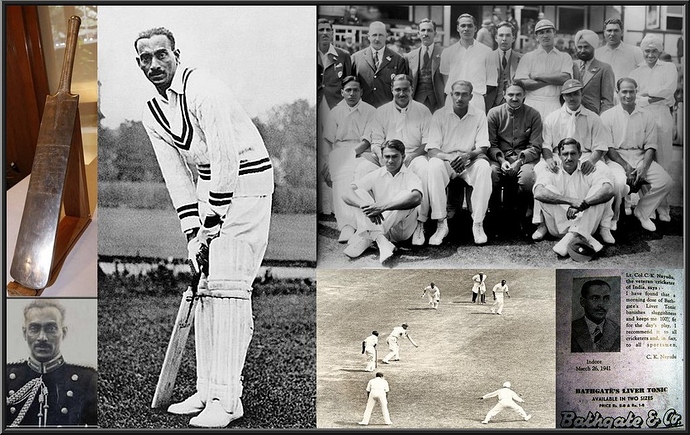 Fun Fact:
CK Nayadu was India’s best batsman but he was never not the captain of team India on their first tour, not even the vice captain. When India was about to tour Engalnd, Duleepsingh ji and Pataudi Sr were considered as captains along with Jardine,an Englsihman born in India. However, both of the Indians did not tour and Jardine played for England.
Hence, maharaja Of Patiala was chosen as the captain, however, he pulled out of the tour at the last minute. After this Indian team toured under Maharaja of porbandar to England with Maharaja Of Limbidi as a vice captain. Maharaja was porbandar got ill one day prior to the test match and hence Maharaja of Limbidi was chose as the captain but he was a bitter rival of Maharaja of Patiala. And as maharaja of Patiala was the sponsor of team, Maharaja of Porbandar appointed Ck Nayadu as the captain. There was also a mutiny among the players when Nayadu was made the captain. It was one hell of a tour.

He was a towering figure with courage and attitude to match. During 1951-52 season of the Ranji Trophy, He was playing against Mumbai, he had been hit with a bouncer off Mumbai’s Dattu Phadkar, losing a few teeth and severely injuring his mouth and jaw. Nayudu is said to have spat the teeth onto the pitch, refused medical help, and then asked Phadkar to continue bowling - even going so far as to “ask him to bowl another bouncer.”

However, despite all the numbers and achievements, the most interesting fact about him is that he was the first-ever player to endorse a brand – Bathgate Liver Tonic in 1941.