The 130-year old football club, Mohun Bagan have agreed to merge with the three-time ISL Champions Atlético de Kolkata. The merger is focused to lead the way towards a more competitive platform for young Indian players, thus, benefitting the overall football ecosystem in the country.

Since the rumours of this merger in 2018, there have been several statements by the fans and the stakeholders regarding who is the actual winner if this deal becomes reality? Is it the 100+ years legacy and emotions of the die-hard Bagan fans or the 6 year ISL franchise who overshadowed I-League and built its own fan base.

Keeping history in mind, The newly formed board retained the iconic green and maroon colours of the Mohun Bagan jersey and marked the beginning of a new era by naming the club ‘ATK Mohun Bagan’. The logo retains its essence as the boatman along with the green and maroon sails continue to feature, or the iconic Pal Tola Nauka. These decisions depict that this merger is not just a business investment but also an emotional investment which will produce a larger fan base.

ATK Mohun Bagan will be coached by Antonio Lopes Habas and the merged entity will take part in the Calcutta Football League (CFL), ISL and their main focus will be to win the AFC Cup 2021 by using Mohun Bagan’s 2019-20 champions’ slot.

What are your views on this newly formed Indian football club? The mereged squad looks complete now and they have managed to retain their biggest stars from last season as well as add fresh new blood. It’s no secret that they are going all out for Sandesh Jhingan and the intentions for next season are clear — win the ISL, get into the AFC Champions League, win the AFC Cup. Now, football won’t be fun if their arch rivals East Bengal do not enter the ISL this season. They have to find investors and work towards playing in the country’s top flight, compete against ATK Bagan. Only then would Indian football be moving forward. Clearly few fans of Mohun Bagan FC aren’t happy about the decision to merge the club with ATK as it has maintained its legacy for more than 100 years.One of the fan said “club ta ke beche dilo” (They sold the club).
But in my point of view it is a good decision made by both the clubs to merge as it will take Indian football to a whole new level as age-old legacy of Mohun Bagan and 6 years old ATK have been champions of their respective leagues.

But in my point of view it is a good decision made by both the clubs to merge as it will take Indian football to a whole new level as age-old legacy of Mohun Bagan and 6 years old ATK have been champions of their respective leagues.

Completely agree with you @Abhishek1

It’s the need of the hour. It’s a win-win merger for both the clubs.

Rather than letting a 130-year-old legacy of the club eventually die due to lack of commercial viability, the merger will strengthen the standing of the combined club identity as the most competitive club in ISL.

ATK will also benefit from the generations of giant fanatic fan-base of Mohun Bagan. Having said that, the onus of success of this merger lies on how professionally the branding, egos of fanbase and governance structure are managed by the new team.

Now we just need to wait and watch where the arch-rivals East Bengal land in the ISL.

Atleticó does not even own this club anymore. Does not make sense why they are changing Mohun Bagan’s name, a club OLDER than Atleticó Madrid. Mohun Bagan represent the pure history of football in India. We should keep it, not destroy the little history we have of anything just because of stupid corporate conglomerates.

I thought of Atleticó de Kolkata to be a stupid name in first place.

On the occasion of Mohun Bagan Day 2020, American stock exchange NASDAQ paid tribute to the Kolkata-based football club by displaying its logo and colours on its billboard in Times Square, New York. Mohun Bagan Day has been celebrated on 29 July each year since 2001, to commemorate their historic victory over East Yorkshire Regiment in the IFA Shield Final on this day in 1911.The victory was seen as a huge moment in India’s freedom struggle at the time, giving hope to the people that the British could be defeated.

This is what the Official Mohun Bagan twitter handle posted- 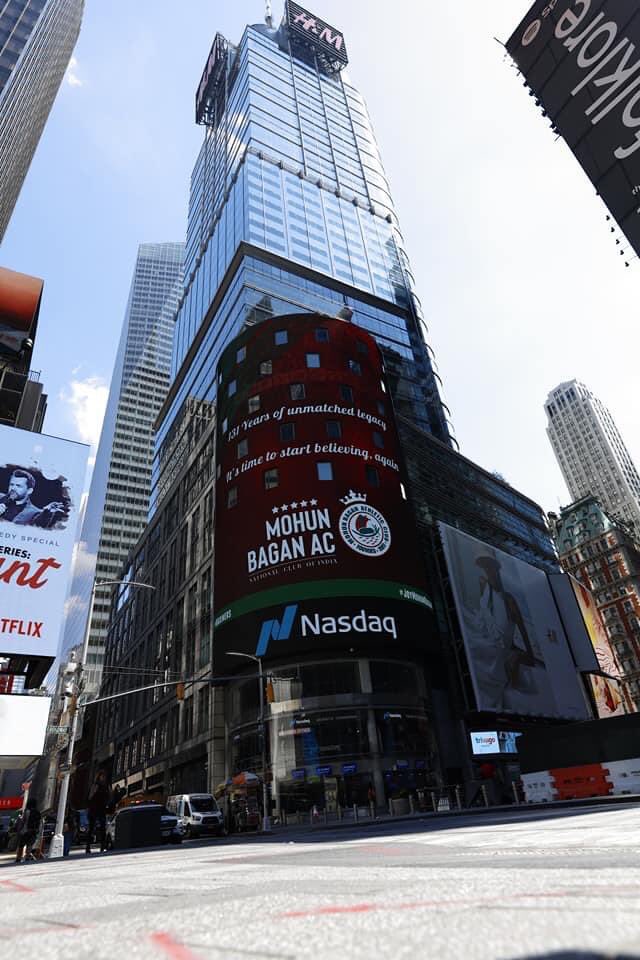 The pictures from NASDAQ is a testimony to the fact that Mohun Bagan belongs to a different league. Huge day for all the Mariners!! Happy Mohun Bagan Day Mariners !! #JoyMohunBagan #MohunBaganDay2020 On the occasion of Mohun Bagan Day 2020, American stock exchange NASDAQ paid tribute to the Kolkata-based football club by displaying its logo and colours on its billboard in Times Square, New York.

This is such an amazing global recognition to honor a historic event!

#OnThisDay in 1911, Mohun Bagan created history by becoming the first all-Indian team to win the IFA Shield after defeating East Yorkshire Regiment 2-1 in the final.