🤼‍♂ Ajay Thakur - Captain of Indian Kabaddi Team and One of the Best Raiders in Pro Kabaddi League!

Ajay Thakur (born 1 May 1986) is a professional Kabaddi player and the current Captain of Indian National Kabaddi Team.

He has over 14 years of professional career in Kabaddi and is described as one of the best raiders in World Kabaddi. He is coached by Baskaran Kasinathan and Balwan Singh.

Ajay started his Pro-Kabaddi career in the inaugural season in 2014 for Bengaluru Bulls and scored a total of 122 raid points of 15 matches with an average of 8.13 raid points per match and with 5 Super 10’s he helped the Bulls reach the Knockout stage.

Ajay Thakur has also been awarded the Padmashri Award in 2019 by the Indian Government for his contribution to the Indian National Kabaddi. 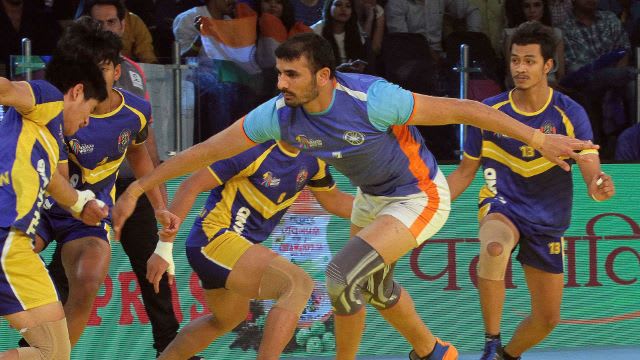 How Ajay Thakur Lit up KWC

Watch the video 'How Ajay Thakur Lit up KWC' & also get latest sports updates & highlights online only on hotstar.com....

A great player and one of the best raiders who needs a good team to win PKL 7 Championship for Tamil Thalaiavas.