Aishwarya Pissay became the First Indian Woman to Win FIM World Cup. Who are the other Indian women breaking stereotypes in the world of motorsports?

Earlier this week, Bengaluru-based biker Aishwarya Pissay made history in Hungary by becoming the first Indian to win a world title in motorsports. She is India’s first FIM World Cup Champion in women’s category. She beat Portugal’s Rita Vieira in the final leg by 4 points.

Aishwarya hopes to next participate in the Dakar Rally, which is considered the world’s most difficult cross-country race.

Aishwarya’s achievement is indeed a milestone for Indian women in this fast, rough and predominately male sport event.

Apart from Aishwarya who are the other Indian women breaking stereotypes in the world of motorsports?

Motor sports is a highly ignored sports therefore achievers in this particular section are ignored. However, India has quite a few women who are leaving their mark in motorsports. Few of them other than aishwarya pissay are: It was quite inspiring to know about Aishwarya Pissay’s historic achievement in Hungary. Your question prompted me to read about other women in motor sports and I came across Neha Dabas and Ria Dabas, the racing sister duo.

26-year-old, Neha, a national-level basketball player, national-level swimmer and an athlete started her professional racing career in 2015. Her younger sister Ria soon joined her on the racing tracks. Both the sisters have participated in the JK Tyre Rotax Karting championship in the Volkswagen Vento Cup, MRF Formula Ford 1600 series, leaving a mark in motorsports for their excellent racing skills and track records. Ria also holds the distinction of being one of the youngest superbike riders in the country. Nice to see this post. I have been following a little bit of motor sports recently and it’s amazing to see these women breaking the gender barrier. One such super biker is Neharika Yadav, a dentist by profession and a superbike racer by passion. A regular rider at the Buddh International Circuit in Noida, Neharika has participated in races held at the Mugello Circuit, Italy and Sepang International Circuit, Malaysia. Women Power! In tons of BHP! 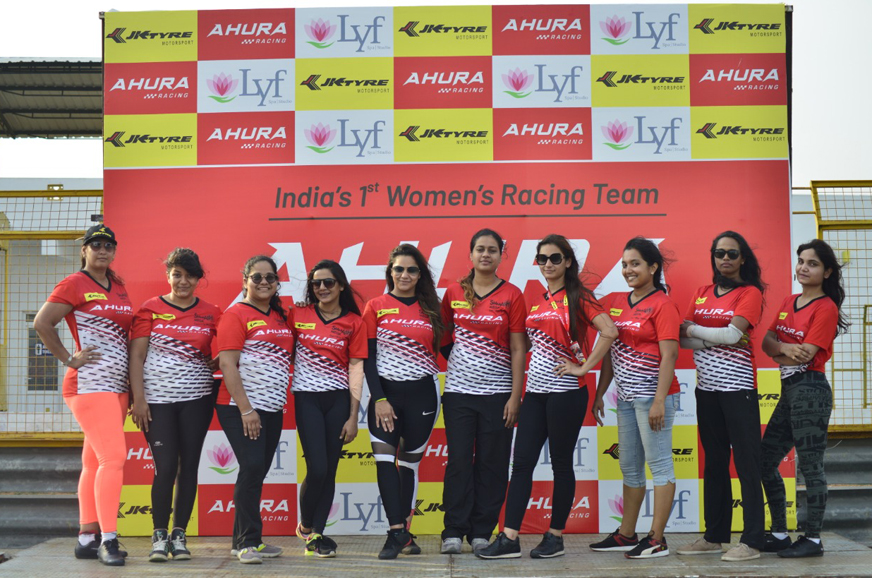 Ahura Racing is entering in the upcoming 2019 JK Tyre-FMSCI National Racing Championship (JKNRC) with 6 drivers. This will mark the team’s second outing in the series and it will once again field a total of six cars in the Formula LGB4 category.

Team Ahura conducted trials on a zonal basis with participants going through beginners’ and advanced training on karts in each zone before a final shootout in a Formula LGB4 car. The 20 fastest drivers from each zone then competed in the final selection process in Coimbatore, where the final six drivers were selected.

Natasha Puri won a fully sponsored drive for setting the fastest time in the selection process, while the second and third place finishers were each given subsidised drives. Joining Puri as part of the team are Shivani Gaurav, Anushriya Gulati, Ojasvi Mehta, Pragathi B and Aman Jubbal.